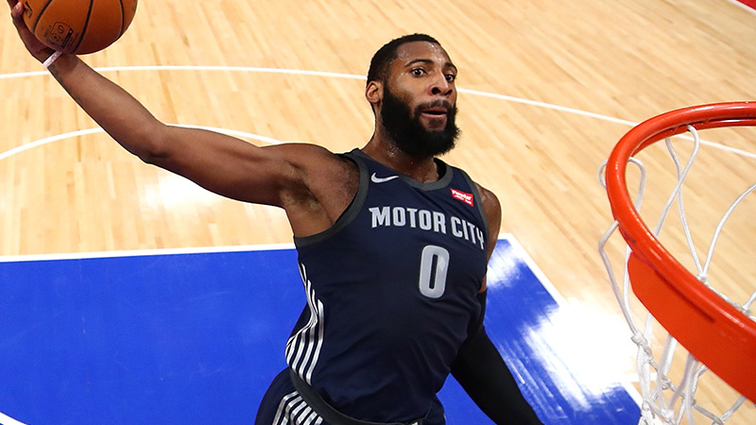 December is here already and it kicks off with an NBA slate of 11 games. The usual major DFS tournaments are on offer:

Four games with totals over 222 on this slate offers a range of options to target. As per usual games involving the Washington Wizards (6th in pace), the New Orleans Pelicans (3rd in pace) and the Atlanta Hawks (1st in pace) are leading the way. The Wizards vs 76ers game has a 7.5 point line and the Hawks vs Thunder has a 13 point line so tread with blowout caution when attacking those contests.

Three games are yet to set a total due to injury news which is addressed below. None of these games are expected to stand out from a game total perspective.

Seven pace up matchups on this slate lead by Oklahoma City Thunder and the Miami Heat. As noted above the Heat look to be the better target due to the game line only being 3 points. The Dallas Mavericks should be the under owned option to attack with a game vs the Los Angeles Lakers who are currently ranked 5th in the league in pace. Note however they bring an implied game total that is less than their season average.

Chris Paul is listed as questionable for the game against the San Antonio Spurs. James Harden (DS $24,840, DK $11,700) continues to smash with Paul out of the lineup, however on this slate he draws a negative matchup vs the San Antonio Spurs who are playing at the 25th fastest pace in the league this season.

Marc Gasol is a game time decision for the game against the Brooklyn Nets. He has yet to miss a game this season however when he has been off the court this year JaMychal Green (DS $7,890, DK $4,300) and Jaren Jackson (DS $10,190, DK $5,800) have been the biggest beneficiaries. Who gets the start would be very interesting.

Aaron Gordon remains questionable for the game against the Phoenix Suns. Jonathon Isaac (DS $8,550, DK $4,400) is the biggest beneficiary with a 7% usage bump and scoring 9.8 points over his season average in the most recent game that Gordon missed. 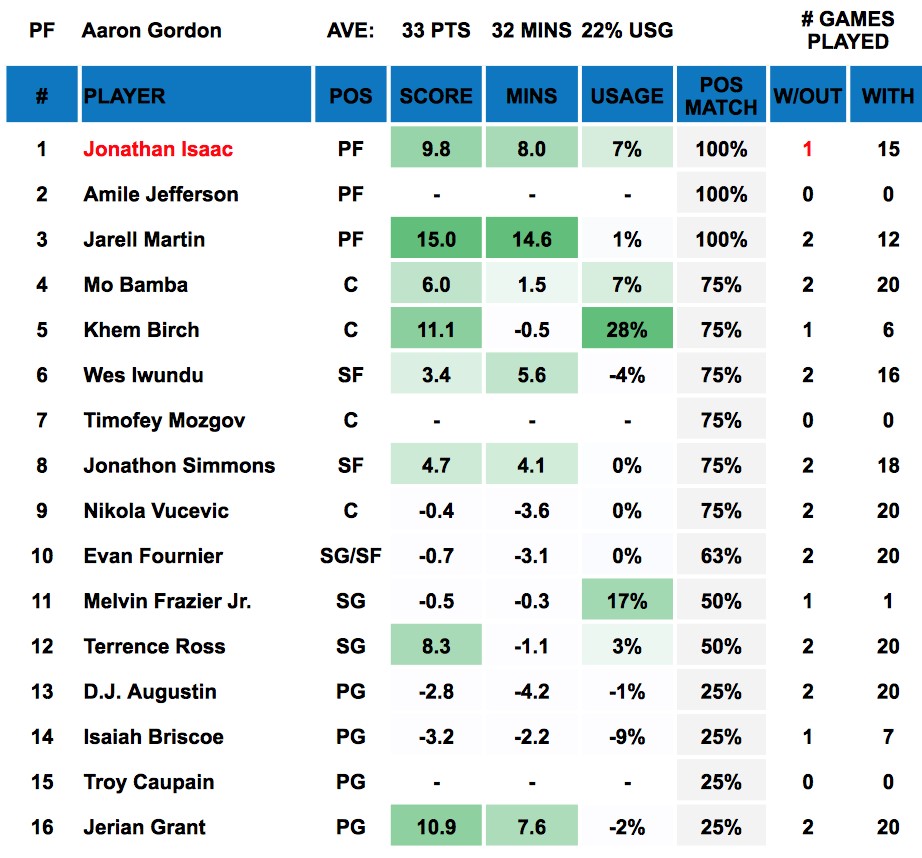 TJ Warren is questionable for the game against the Orlando Magic. Warren has missed one game this season and Trevor Ariza (DK $5,200) was the biggest beneficiary posting a score over 13 points above his season average while receiving 6% usage bump. 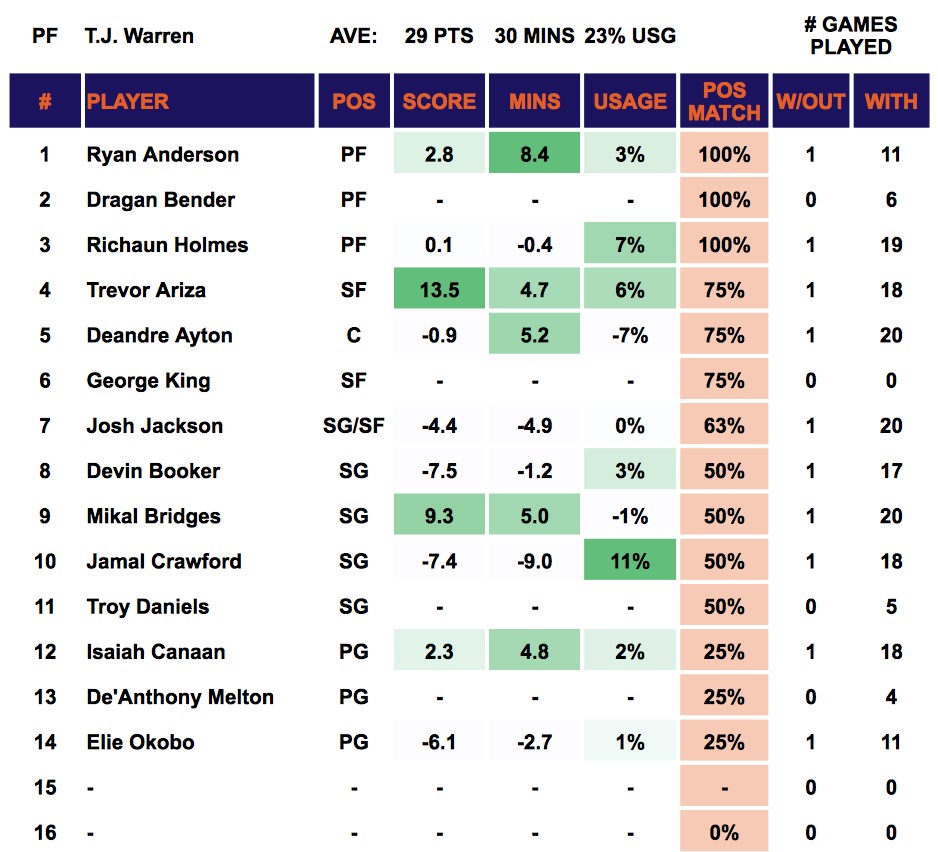 Both Jaylen Brown and Al Horford will be out for Boston’s game vs Cleveland. Marcus Morris (DS $9,540, DK $5,400) has seen the biggest usage bump with Brown and Horford off the floor this season. Monitor the lineup notes to see who replaces Horford in the starting lineup, most likely it will be Aaron Baynes (DS $5,700, DK $3,200).

Ryan Arcidiacono (DS $10,510, DK $4,400)... MVP… MVP… MVP… my main man has seen an massive price bump on Draftstars after shredding all comers this week with scores of 36.5 and 47.25 in his last two games. He isn’t really great value any more and chances are he is due for a total shocker, but after leading me to two GPP wins this week I will still take a flier and be giving him the free throw line chant.

Jonathan Isaac (DS $8,550, DK $4,400) is back in the starting lineup and has relished the last two games with Aaron Gordon being injured scoring 22.5 and 28.5 fantasy points. On this slate he has a matchup vs the Phoenix Suns who are 24th in the league for defensive efficiency against small forwards this season. If Gordon plays this play is not nearly as valuable.

Aaron Baynes (DS $5,700, DK $3,200) will likely start with both Brown and Horford out. This season he has been averaging just over 1 fantasy point per minute and should expect to see around 25 vs Cleveland who are 21st in defensive efficiency vs the centre position this year. At near minimum price he will be close to a lock and load play.

JaMychal Green (DS $7,890, DK $4,300) is another who will benefit from injury if starting centre Marc Gasol is out. Green will likely play more minutes and even draw the start with Jackson Jnr sliding to centre without Gasol.

Marcus Smart (DS $7,180, DK $4,300) has averaged 24 fantasy points in his last three games and played a whopping 40 minutes in the most recent game with Jaylen Brown out. Anyone getting that dose of action is a great play at this price.

Tim Frazier (DS $7,500, DK $4,200) got the start last game and went ballistic dropping a massive 42.5 fantasy points against the Washington Wizards. Playing him on this slate would be chasing points a bit as it isn’t quite as sweet a matchup and his price has seen a little increase based of this performance, but if he gets the start again it is worth noting he has significant GPP upside.

Donovan Mitchell (DS $11,900, DK $7,600) is criminally underpriced on Draftstars and should be a lock and load play there. He returned from injury last game and dropped 43.75 fantasy points. He has an ideal matchup on this slate vs the Charlotte Hornetts who have conceded the third most fantasy points in the league to the SG position over the past 10 games.

Jimmy Butler (DS $13,750, DK $7,400) remains under priced and has one of the best matchups in the league vs the Washington Wizards who are ranked 6th in pace and 2nd last in defensive efficiency this season. I know I recommended Butler in my last preview and he came up with a lineup destroying 18 fantasy points, hopefully that means he will be under owned on this slate. Unfortunately the pain of backing over someone who just ruined our day is central to DFS as two games ago Butler had 63 fantasy points at his current price which is a GPP crusher. Saddle up.

Marcus Morris (DS $9,540, DK $5,400) is the Boston play I love the most with their injuries, along with Baynes. He has received a usage bump of 4.8% with both Horford and Brown off the court this season.

Nikola Vucevic (DS $18,420, DK $8,900) has been an absolute revelation this season averaging an eye popping 1.49 fantasy points per minute. He will be going up against the rookie DeAndre Ayton who has had his struggles defensively this season. The Suns are giving up the third most fantasy points in the league to centres this season.

Andre Drummond (DS $17,000, DK $9,400) killed many of our nights in his last game posting one of the lowest scores of any centre of the slate and having his lunch stolen by Enes Kanter. You might be hesitant to play him after that performance but that just means lower ownership. He has drawn a matchup vs the Chicago Bulls who are quietly giving up the most points in the league to centres over the last 10 games.

Russell Westbrook (DS 20,320, DK $11,500) had his first big outing of the season last game with a massive triple double en route to 77 fantasy points. On this slate he draws one of the top matchups in the league for a point guard vs Atlanta and Trae Young, whose defense to start his career has been affectionately compared to tissue paper. This is the type of game that Westbrook has a triple dip early in the second quarter, you just have to hope the Thunder aren't already up by 30.