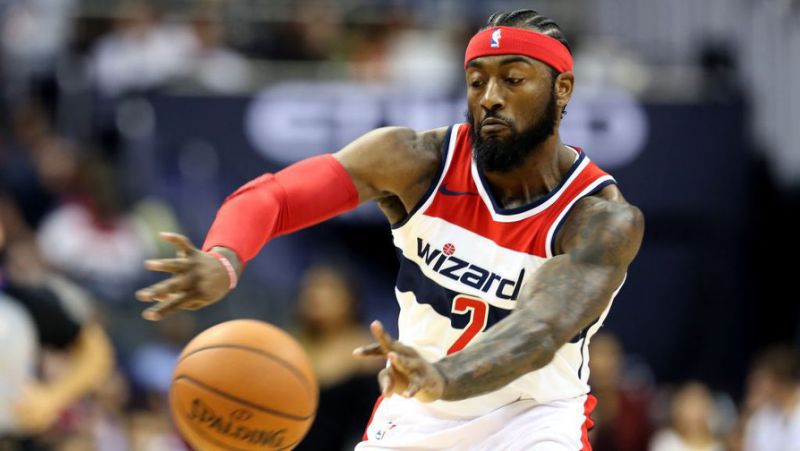 NBA Wednesday sees us returning to the big slates with 10 games on the card . The usual major DFS tournaments are on offer:

There is a wide collection of high game totals to consider on this slate with a whopping five games over 227 total points. The crown jewel of the night is the Washington Wizards @ New Orleans Pelicans which is sporting one of the biggest totals of season at 241.5. These two teams have plenty of star power to load up on and game stacks from both sides will popular. It also brings Anthony Davis ceiling of 80+ fantasy points into the mix.

There are three games yet to have totals set yet due to injury news which we cover below, however I wouldn’t expect any of those matchups to break into the top 5 game totals.

While the top game will get the majority of the attention there are plenty of other teams to target that might go under owned on a 10 game slate. Charlotte have one of the premier matchups in the league vs the Atlanta Hawks and are in the pace up matchup of the night. That game has a 12 point line set however so the blowout potential is significant.

Chicago is also in a significant pace up match up, however Milwaukee are always a team to beware of due to their defensive ability. this matchup also has blowout potential with a line of 13 points.

Chris Paul is listed as questionable for the game against the Dallas Mavericks. As we saw on Tuesday James Harden (DS $ 22,030, DK $11,600) and Eric Gordon (DS $10,860, DK $5,800) are the significant beneficiaries when Paul is out. Dallas isnt as good a matchup as they had on Tuesday vs the Wizards but anytime Harden gets a 5% usage bump on his typical output he is in play. 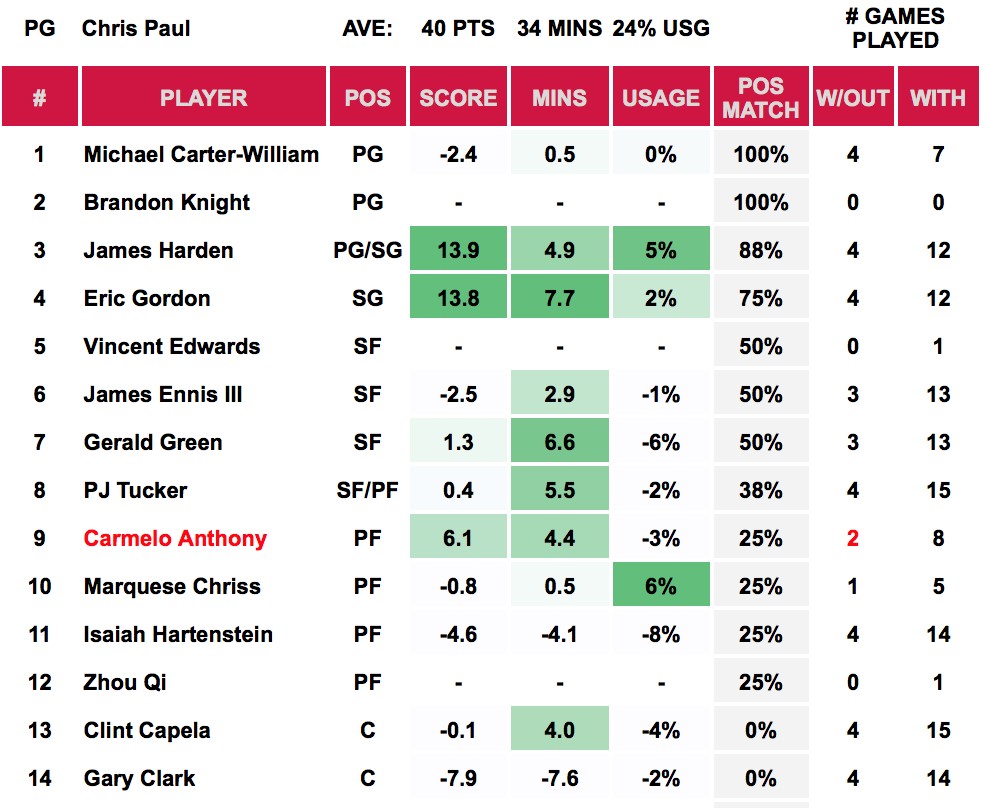 Donovan Mitchell has missed the last few games for Utah. In games when Mitchell has been out this season Ricky Rubio (DS $12,020, DK $6,900) has averaged 5.5 more fantasy points. You should be able to get him at low ownership on this slate. 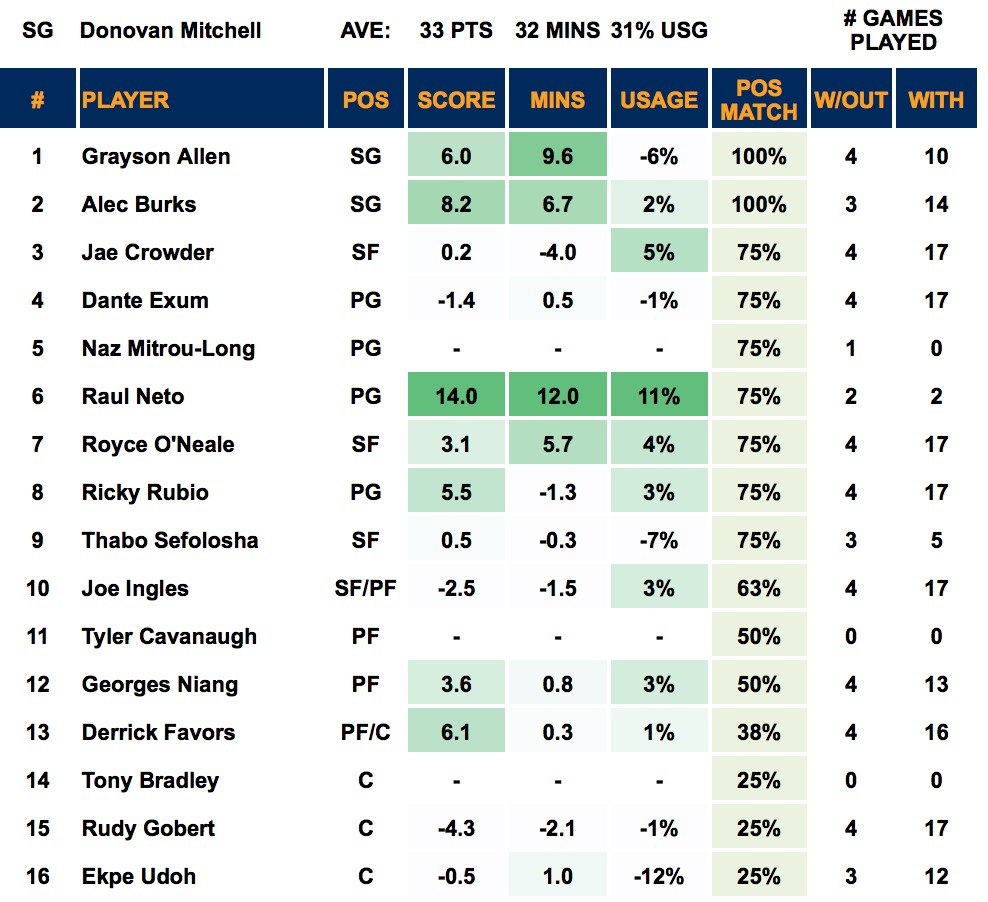 Aaron Gordon will be a game time decision vs the Portland Trail Blazers. We only have one game this season where Gordon has been out and in that matchup Jarell Martin (DS $5,000, DK $3,200) started and returned significant value. Keep an eye on the lineup news for the Magic if Gordon misses. 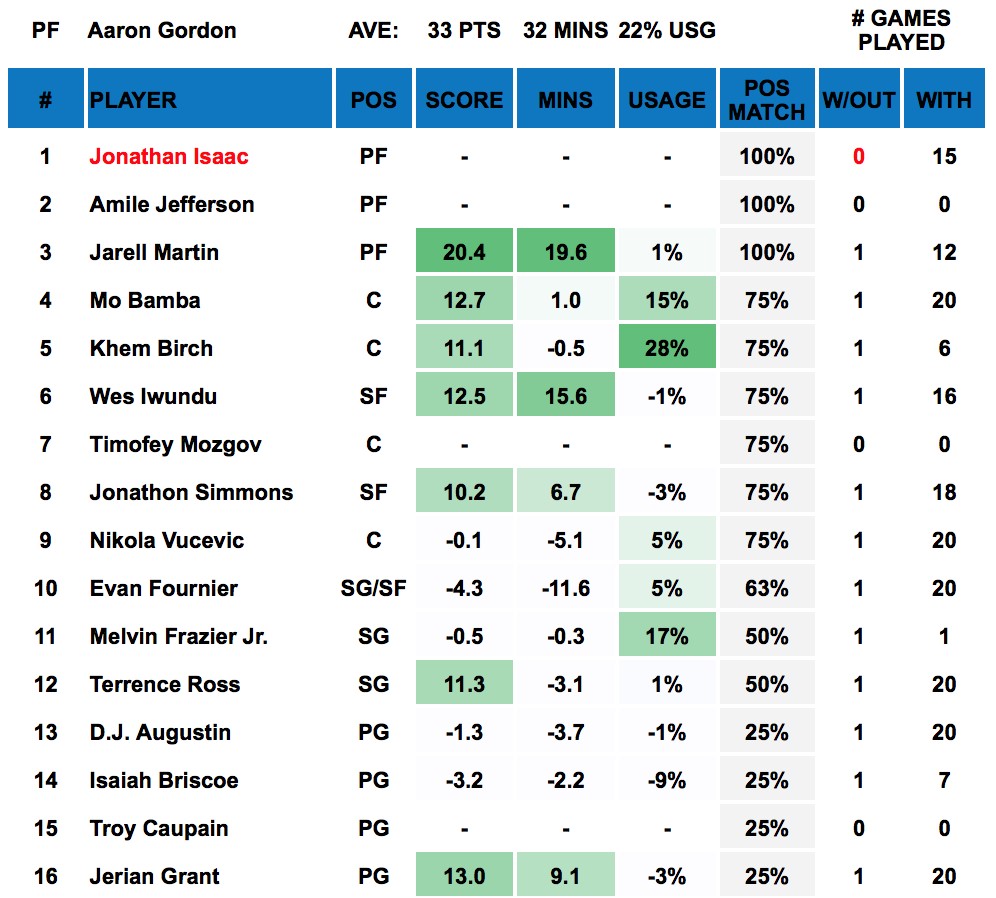 Ryan Arcidiacono (DS $7,500, DK $3,900)... I said ARCIDIACONOOOOOOOO!!! How could I not back over him after he was the value play of the slate in my team that took down the Sharpshooter on Tuesday. This is a pace up matchup for him, however he will have a reasonably tough defensive matchup in Eric Bledsoe who is sporting the third best defensive RPM for point gaurds in the league this season. As I said in my recap though, he is too cheap for a player getting over 30 minutes a game.

Allonzo Trier (DS $7,240, DK $3,800) went right under my radar today on a day without any obvious value. He certainly won’t be overlooked on this slate by me or the field after his eye popping 24 point, 10 rebound and 7 assists today. Given it is a back to back his price hasn’t moved and the Knicks play a pace up game vs the Philadelphia 76ers.

Jerami Grant (DS $8,540, DK $4,300) is going up against the Cleveland Cavaliers on this slate who have a league worst defense efficiency rating this season.

Trae Young (DS $11,020, DK $6,600) is another whose price has not moved on a count of being on a back to back. Anytime Young is priced in this range he is worth having exposure to due to his 50 point upside. On this slate he is in the second highest game total on the slate and Kemba Walker is ranked 79th out of 91 point guards in defensive RPM this season.

Montrez Harrell (DS $13,800, DK $7,200) will be matched up against DeAndre Ayton or Richaun Holmes when he is in. Harrell's price is getting up there for coming off the bench but we all just saw what Sabonis was able to do to the Suns today in a similar role. The Phoenix Suns have given up the 4th most DraftKings points to centres this season.

TJ Warren (DS $10,990, DK $6,500) is playing well over 30 minutes per game at the moment and getting all the usage he can handle. This matchup vs the Clippers is pace up for the Suns and PF is one of the areas to attack the Clippers at as they have given up the seventh most points to the position over the last 10 games this season. 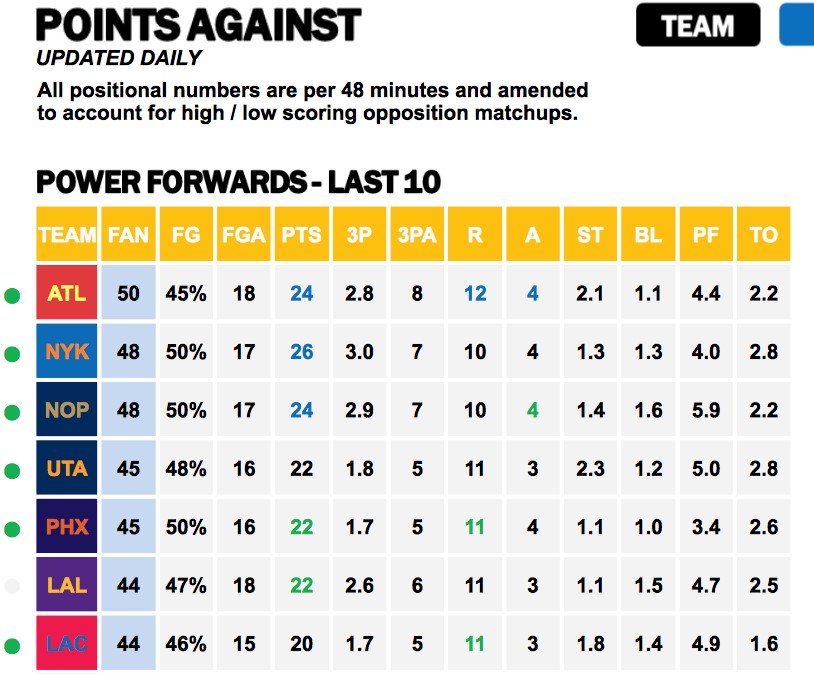 Anthony Davis (DS $21,880, DK $11,400) has a lot of Harden about him from Tuesday on this slate tonight. Up against the same team who are playing the 6th fastest team in the league with the second worst defensive efficiency as mentioned in the game breakdown his slate-breaking ceiling is firmly in play.

Joel Embiid (DS $19,690, DK $11,200) vs the Knicks might not be that enticing on the raw numbers, but Enes Kanter is playing the majority of the centre minutes for the Knicks currently. He is 50th out of 51 centres in defensive RPM this season, which means Embiid will have every opportunity to continue on his MVP campaign with a monster night.

Rudy Gobert (DS 15,140, DK $7,700) rounds out a usual night where there are centres galore for DFS. Who says it is a small ball league at the moment. Gobert draws the nuts matchup for centres this season vs the Brooklyn Nets who have conceded the most points to the position this season by almost 4 points per game to next worst. They also concede the most rebounds per game to the position, Gobert is averaging over 12 per game this year.