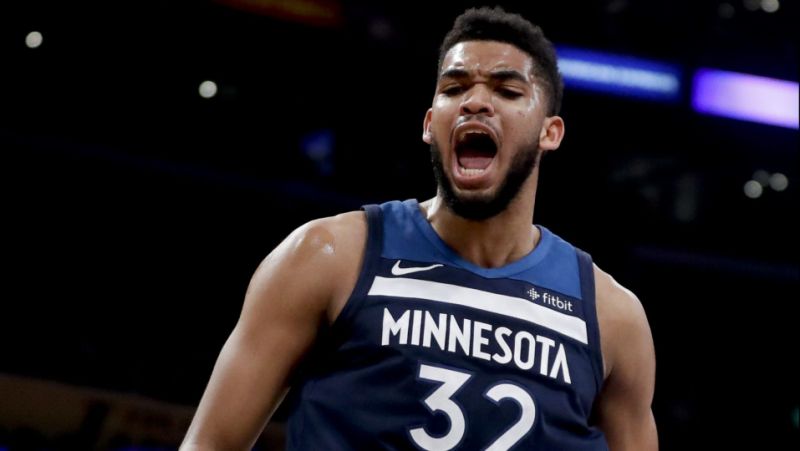 NBA Thursday see us return to the monster sized slates with 10 games on the card . The usual major Thursday DFS tournaments are on offer:

There are points galore on this slate with a whopping 6 games with a game total of 221 or above. The headliner game of the Washington Wizards vs Atlanta Hawks is not a game you’d ever watch for the basketball, but as a DFS player it has be salivating. With a whopping 234 point game total both teams are top 6 in pace this year and bottom 7 in defensive efficiency.

On the other end of the spectrum for watchability is Philadelphia 76ers vs the Toronto Raptors that should be the game of the night and still makes for a great DFS target match with a 229 point game total.

The only game that is yet to have a total and line set due to injury news is Dallas vs New Orleans, which should also have a big total with both teams in the top 12 in pace this year.

No surprise to see Washington in the pace up spot of the night vs Atlanta who are currently first in pace this season. They are have the biggest implied point total to their season average on this slate at 8.1 points making putting them in an absolute elite spot.

Dallas have the second biggest pace up matchup vs New Orleans who play at the third fastest pace in the league this year. Beware however as Dallas had half their roster on injury watch today and will be on the second leg of a back to back. 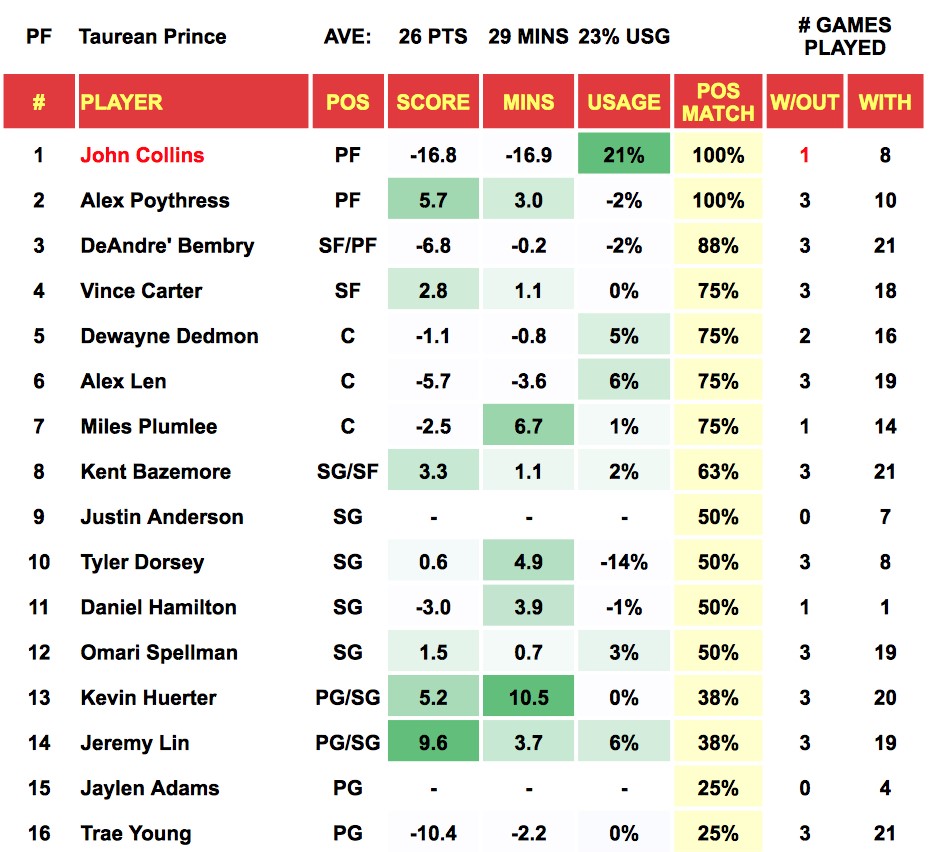 Marvin Williams will be out for at least a week. He has yet to miss a game this season and no major usage beneficiaries jump out when he is off the court this year, however he has been starting and playing 25 minutes per game so greater opportunity is likely to be present for Michael Kidd-Gilchrist (DS $7,450, DK $4,000) and Frank Kaminsky (DS $6,660, DK $3,700). 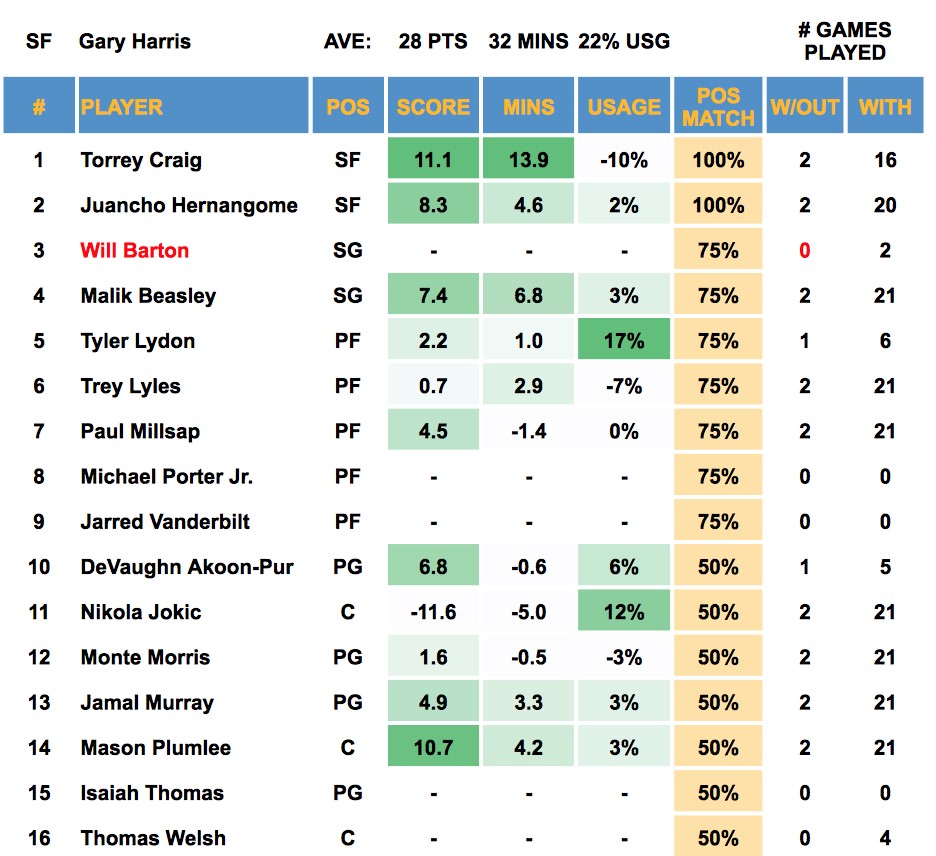 Nikola Mirotic is a game time decision for the game against the Dallas Mavericks. In the 3 games he has missed this season Jrue Holiday (DS $16,030, DK $9,100) and Julius Randle (DS $13,600, DK $7,100) have had massive bumps on their season average with Holiday averaging a whopping 16.8 more fantasy points than his season average while Randle has scored 13.4 more fantasy points from a minutes increase of 12.2. 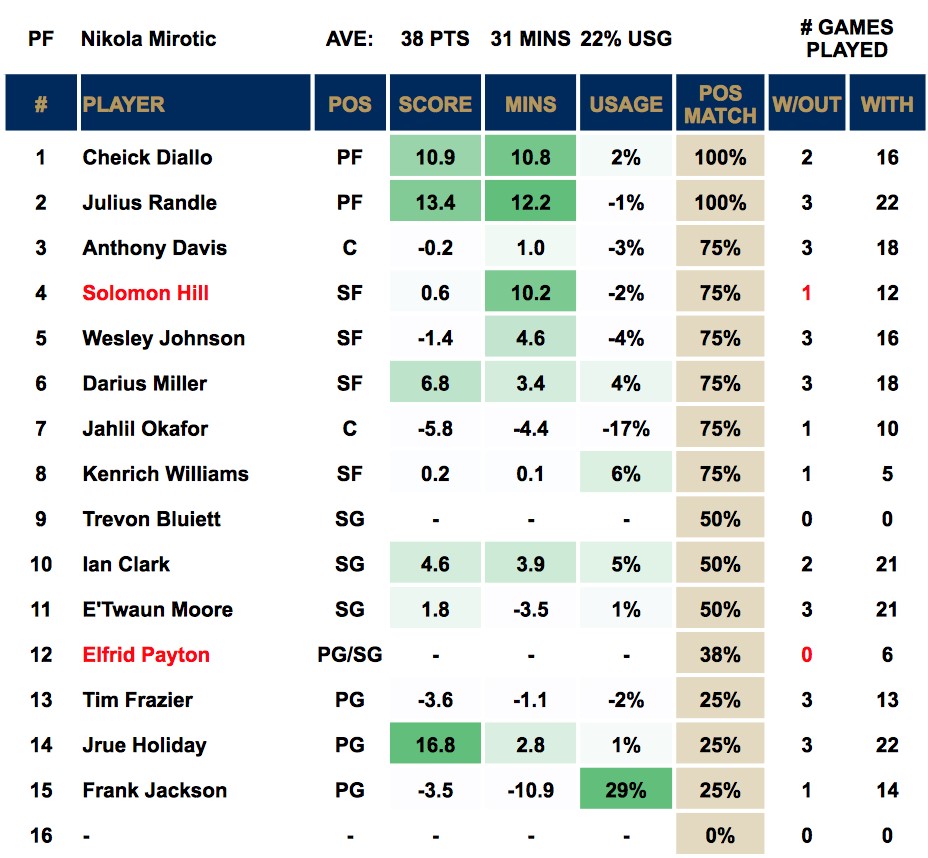 Kent Bazemore (DS $8,960, DK $4,400) should get an increase in minutes and possible usage with Taurean Prince out injured. His price has dropped lately along with his decrease in minutes but Bazemore brings 40 point upside if given the opportunity which is GPP winning value at this price point.

Kevin Huerter (DS $7,180, DK $3,700) is another who should receive both a minute and usage boost with Prince out as highlighted in our player out tool above. Huerter has already been in good form since entering the starting lineup, he has averaged 23.8 fantasy points over his past three games which would return sufficient value at his current price. He is also in a great matchup vs the Washington Wizards who have given up the 5th most fantasy points in the league this season.

Frank Kaminsky (DS $6,660, DK $3,700) is a GPP punt at almost minimum price across the industry. With Marvin Williams out he should receive close to 25 minutes and he has been averaging just over 1 fantasy point per minute this season.

Trae Young (DS $11,130, DK $6,000) is in my player pool yet again. It is true I just cant resist his upside for GPPs at this price. Do not play him in cash. I repeat, do NOT play him in cash. On this slate Young has the best matchup in the league for point guards against the Washington Wizards who have conceded the most points to the position this year, so if there is any game where he is going to flash that 50 point upside it is this one.

Jamal Murray (DS $11,990, DK $6,700) should be very low owned on this slate. Nothing pops about the matchup with the Orlando Magic who have been stingy on fantasy points this year, especially against point guards. However, with Harris out Murray will see a usage bump as discussed above and 50 point upside at minimal ownership is worth considering in large GPPs.

Otto Porter (DS $11,810, DK $6,100) / Markieff Morris (DS $11,810, DK $6,400) are both in the premium matchup tonight and Atlanta have given up the most points in the league to power forwards over the last 10 games. On DK they are slightly priced up for what I would like, however they still make for great plays in game stacks.

Steven Adams (DS $12,110, DK $6,700) has the dream matchups of the league for centres on this slate. Brooklyn have given up over 3 points per game more to the position than the next team this year and this makes exposure to centres playing them a must on every slate they are on. Adams has been a model of consistency this season and should be a great cash play.

Karl Anthony-Towns (DS $16,850, DK $9,500) is my undercover premium play on this slate. Nothing else totally stands out and Charlotte have been slowly trending up in conceding points to centres, 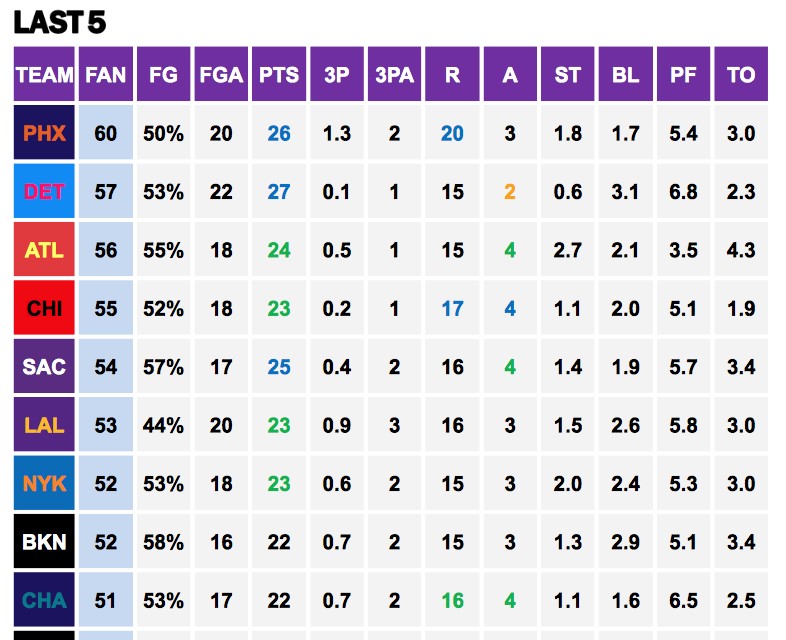