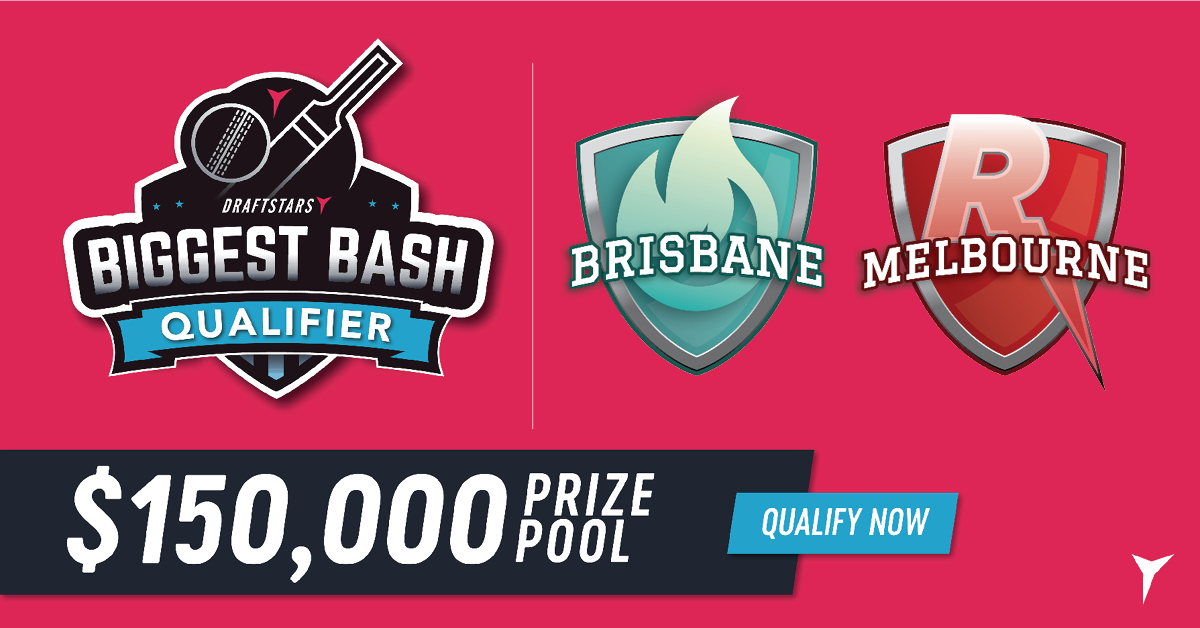 BBL08 heads to the Gabba on Thursday night where the in-form Brisbane Heat hosts the Melbourne Renegades. The Heat started the season badly but have won their past two games and will be looking to continue their momentum back on their home deck. The Renegades got back on track on Monday night when they beat the previously unbeaten Hobart Hurricanes at Marvel Stadium.

Read our interview with Jason Knox aka “Knoxinator”, who proved you can win with just one $2 entry, or take a look at our chat with Shaun O’Neill aka “THE_BEARD” who won his way in after entering three lineups while at the pub! We also spoke with “Donkey”, who is very happy he won his entry but a bit less happy about revealing his identity!

Unfamiliar with some of the players in this game? We have full profiles on the squads of all eight Big Bash teams, so you can read up on the Brisbane Heat and Melbourne Renegades prior to building your lineups.

The Gabba is an extremely high scoring venue with an average first innings score of over 180 over the past three seasons. Batters generally have a fun time on what is usually a fast, true deck and with an average run rate of over 9 runs per over it can be hard for bowlers to earn the economy rate bonus on Draftstars. In the first game of the season the Heat struggled their way to 146 before the Strikers picked them up pretty easily with 5 wickets to spare.

After dominating the Thunder to the tune of 54 runs off 30 balls, Chris Lynn ($22,100) has been priced back up for this match. However if you look at the salaries on offer, there are only five other players priced above the $14,200 average so fitting him in at this salary looks easier than first though. Lynn loves the Gabba and is especially strong against the seamers, which are the backbone of the Renegades attack. He is the obvious play for the Heat, even at this salary, and deserves plenty of exposure with his match-winning capabilities.

Young Max Bryant ($13,900) has been one of the finds of the tournament. He continued his good form against the Thunder, smashing 36 off 23 balls with a couple of sixes, earning himself a strike rate bonus for the fourth consecutive match. He is still priced slightly below the average despite his 42 point average and he is threatening to bust a match wide open with his attacking play. Coaches are slowly learning his name but you can continue to play him at lower ownership than he deserves.

Usman Shinwari Khan ($14,800) has been a very consistent bowler for the Renegades, reflected by his 48 point average and only one game under 33 for the season. His numbers may be inflated by the tricky Marvel Stadium pitch but he bowls with genuine pace which could be a major weapon on this fast deck. He is economical and can take a wicket so he gives you two options to score and is one of the leading bowling options at a fair salary.

Mujeeb Ur Rahman ($15,700) has been superb for the Heat this season and now you can get him at a slightly reduced salary after his scoreless performance with a wet ball in Sydney. He can take wickets – twice taking two in an innings – as well as keep the runs down and bowls a lot of powerplay overs which provides great scoring opportunity. Two wickets with an economy bonus provides value at this price point and that is a very achievable mark for him to hit.

Brendan Doggett ($11,300) is a cheaper option who has appeal given his wicket taking ability. He averages a wicket per innings and has taken a wicket in both games he has played this season. Keeping things tight is not his strong suit so if he goes wicketless he is a genuine risk of scoring zero or worse, but if he bobs up with a wicket or two at this salary on what could be a tough night for the bowlers he will be worth a place in your lineup.