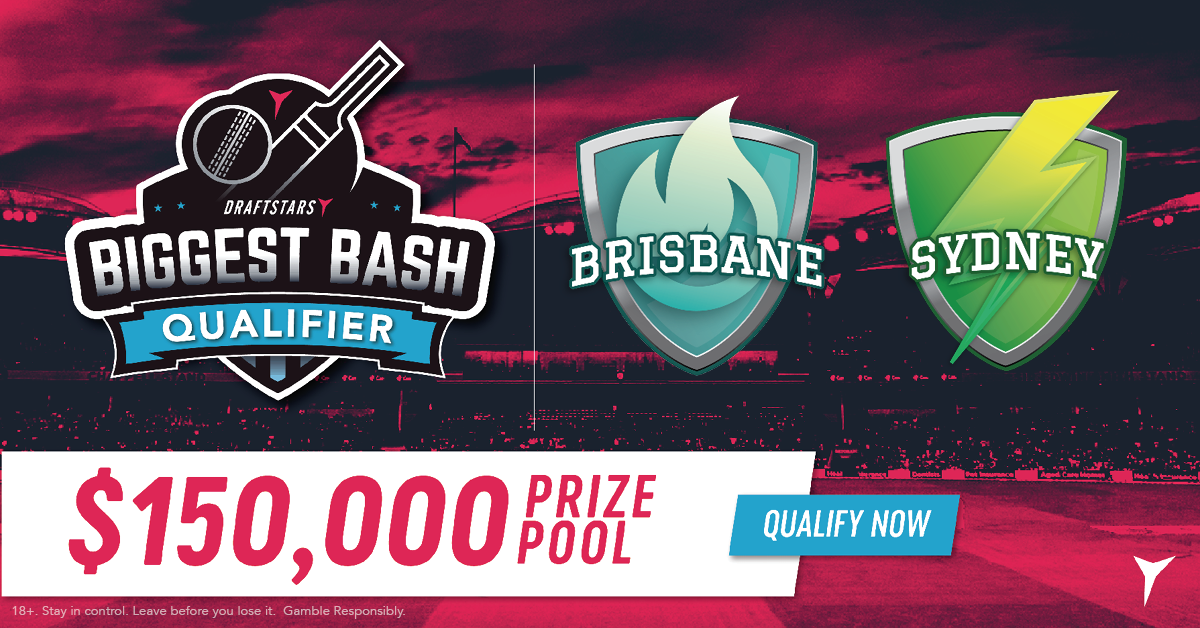 The BBL08 heads up to The Gabba on Thursday night where two in-form teams will square off – the Brisbane Heat and the Sydney Thunder. The Heat destroyed the Renegades in their last match, winning by 101 runs to get to 3 wins and 4 losses, and are starting to build some momentum in this tournament. The Thunder gave the Strikers a 71 run spanking to get to 4-4 and will be keen to consolidate their position in the top 4. The last time these teams played at Spotless Stadium the Heat won a rain affected match on the Duckworth Lewis system after scoring 186 batting first.

The Gabba is an extremely high scoring venue with an average first innings score of over 180 over the past three seasons. Batters generally have a fun time on what is usually a fast, true deck and with an average run rate of over 9 runs per over it can be hard for bowlers to earn the economy rate bonus on Draftstars. In the first game of the season the Heat struggled their way to 146 before the Strikers picked them up pretty easily with 5 wickets to spare. More recently, the Heat again struggled batting first, scoring 144, before the Renegades cruised to victory for the loss of two wickets.

Want to win a free trip to stay at Crown Metropol in Melbourne and play off for a first prize of $50,000? Then the Draftstars “Biggest Bash” contest is for you! With a $2 qualifier running on every BBL contest, here is your chance to party at the VIP Live Final with former Australian fast bowler Brett Lee and compete for a share of $150,000! Check out our interviews with some of the qualifying winners who have already booked their trip to the final:

Not sure who some of these players are? Check out our squad profiles of the Brisbane Heat and the Sydney Thunder to make sure you are up to date before you construct your lineups.

The Brisbane Heat have three obvious batting choices at the top of the order and all three are in tremendous form. Chris Lynn ($23,100) and Brendon McCullum ($17,900) both made half centuries last time they played the Thunder, with Lynn making 54 off 30 balls and McCullum 56 off 35. Young opener Max Bryant ($14,400) has also been getting among the action, scoring 36 off 23 in that match, and his scores continue to be boosted by attaining the strike rate bonus. All three are extremely playable given the number of value options in this match and playing three together was a winning DFS strategy when they last played.

Shane Watson ($12,700) finally broke through for a big knock last time against the Strikers, smashing 68 off just 40 balls. Despite that innings he still remains attractively priced, so much so that you may consider fading him as he projects to be extremely popular. Still, he is clearly the match-winning option for the Thunder with the bat and if he goes big you will need him in your lineup.

Mujeeb Ur Rahman ($17,500) is very hard to go past when it comes to the bowlers as he has claimed his economy bonus five times in seven matches and taken six wickets along the journey. He took 2/24 in his last match here and can be very hard to get away in the powerplay overs. His upside hasn’t been great this tournament with a high of 86 and only three scores above 60, but he is very consistent and won’t often leave you empty handed.

The Gabba wicket presents an interesting challenge for the Thunder bowling attack which is predominantly made up of slower bowlers who have thrived on the slower Spotless Stadium pitch. They have struggled when playing away but Daniel Sams ($18,000) has been a consistent option with the ball on the flatter tracks and brings obvious upside given he generally bats in the top 6 as well. His form has been patchy after a huge start to the season so his ownership is dropping and this looks a good situation to get him into your lineups.

The unheralded bowling pair for the Heat of Josh Lalor ($11,300) and Brendan Doggett ($10,500) present as valid value options. Both are generally under owned given their lack of profile but Lalor is both tidy and capable of taking a wicket with his swing bowling and Doggett has taken 6 wickets in 4 matches with at least one in every inning. They are clearly capable of hitting value and may provide a nice point of difference for your lineups.