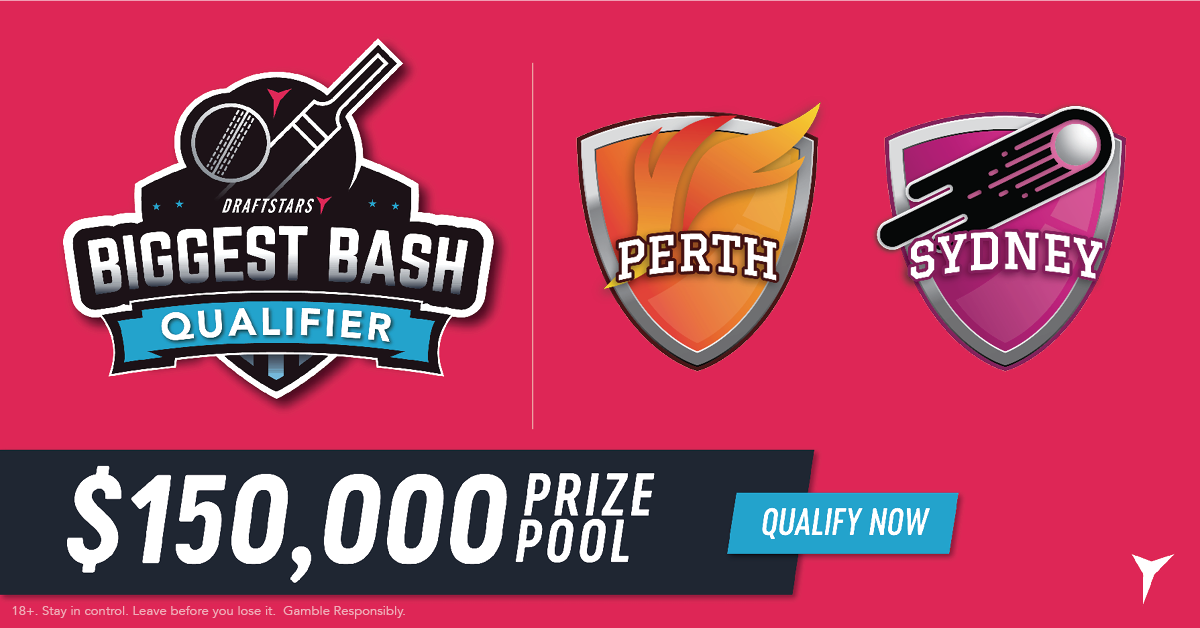 The final leg of Sunday’s BBL08 triple header is the Perth Scorchers hosting the Sydney Sixers at Optus Stadium in Perth. Perth’s season is hanging by a thread but they notched their 2nd win last time against the Stars and will still be desperate to get back in the mix. The Sixers haven’t played since last Sunday, where they scored an impressive win against the Strikers on their home deck, chasing down 150 with 6 wickets in hand.

While last season’s solitary game at Optus Stadium produced a run feast for the Hobart Hurricanes, the first couple of games there this season have been anything but. In the first match the Scorchers knocked over the Strikers for just 88 runs on a wicket with a particularly green tinge and then passed their total three wickets down with two overs to spare. Last time the Scorchers struggled to 6/135 off their 20 against a Heat bowling attack not renowned for its quality, with the Heat getting the runs 5 down with 10 balls to spare. Expect a tough batting pitch by T20 standards again and lean towards the bowlers in your lineups.

Need more information on any of the players in this match? Check out our squad profiles of the Perth Scorchers and the Sydney Sixers to make sure you are in the know before you construct your lineups.

Cameron Bancroft ($17,200) is working nicely into the tournament building each time at the wicket, capping off with a strong 59 run performance against the Stars. Now with a 3 game average of 48FP and Bancroft has the gloves so can still add points if a failure against the Sixers occurs. Should open or at least be in the top 3 and while he is priced up, he is one of the few Scorchers batsmen who can make a big score.

James Vince ($13,800) joins the Sixers as a replacement player for Joe Denly who is off to the West Indies for the English team. Vince spent previous seasons with the Thunder and has been recently been playing for Auckland in the Super Smash. Whilst his form for Auckland is patchy (scores of 1 and 18) and he didn’t get much of a go in the T10 in Sharjah, Vince has an overall record of T20 average of 29.07 and a strike rate of 132.45 from 157 games. He looks well priced considering his experience in this form of the game.

Ashton Turner ($17,600) is one of the players of the Tournament, so much so that Justin Langer flew him over to Sydney just to tell him how well he is going and then flew him back to Perth. He has scored above 60 fantasy points in his last three matches but now you pay a premium price for him. His strike rate generally earns him a bonus so he doesn’t have to make a big score to make big points and is capable of hitting value even at this higher salary for that reason.

Tom Curran ($21,000) went for plenty last match against the Strikers conceding 38 runs from his 4 overs. Yet the lad is averaging 74FP from his last three matches and is suited to the pacey Perth wicket. Love his feisty nature and doesn’t mind barking at anyone on the field. 3rd leading wicket taker for the tournament and this high salary and his propensity for the odd low score may mean he is underowned. Has gone above three figures in fantasy points three times this season so is worth some exposure if you play multiple lineups for that reason, even at this salary.

Depending on selection, Usman Qadir ($10,000) or Matthew Kelly ($9,000) will be required as a value piece for lineups as the pricing on players is tight. Qadir got the start last game and did get one wicket at the MCG but this pitch is generally suited to the quicker men. Kelly may get the nod here for that reason and is a genuine wicket taker.  His record from BBL07 shows that Kelly picked up at least one wicket in each match and he is an obvious play at his low salary should he be picked.

Andrew Tye ($18,300) showed why he is one of the best T20 bowlers by exploding for a 4 wicket 134 fantasy point performance against the Stars, which boosted his 3 game average to 64. Tye will take that extra confidence and target the Sixers middle order here and is always a chance to take a bag of wickets as the designated death over bowler. His price makes it hard to play a lot of him but you need exposure to players capable of big scores and he is exactly that.