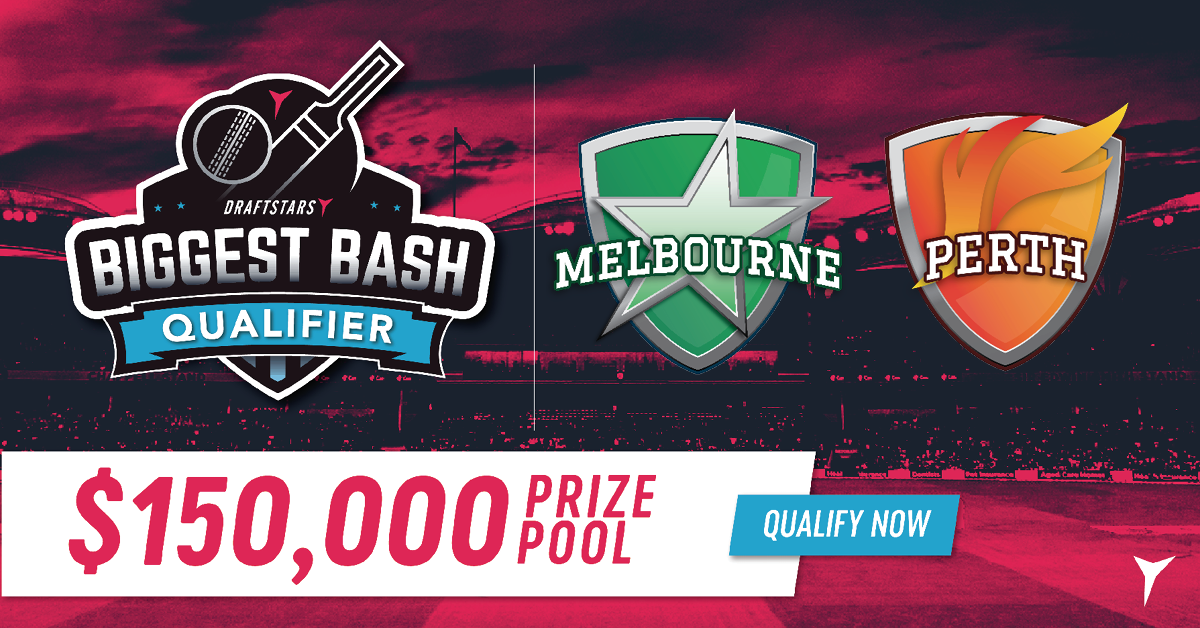 BBL08 returns to Melbourne on Wednesday night where the Melbourne Stars will take on a desperate Perth Scorchers side at the MCG. The Stars have got their season back on track with three wins to get to 3-2 but now have to contend with the loss of players to Australian ODI duty. The Scorchers are in all sorts of trouble after losing at home to the Heat and sit at the bottom of the table at 1-5.

Read our interview with Jason Knox aka “Knoxinator”, who proved you can win with just one $2 entry, or take a look at our chat with Shaun O’Neill aka “THE_BEARD” who won his way in after entering three lineups while at the pub! We also spoke with “Donkey”, who is very happy he won his entry but a bit less happy about revealing his identity!

Unfamiliar with some of the players in this game? We have full profiles on the squads of all eight Big Bash teams, so you can read up on the Melbourne Stars or Perth Scorchers prior to building your lineups.

The Melbourne Cricket Ground has been quite bowler-friendly in recent seasons returning very similar numbers to the SCG with low boundary numbers, perhaps reflective of the long boundaries. Teams batting first have produced very low runs per wicket and runs per over numbers, and have only won 20% of complete matches as a result. These figures suggest a lean to playing bowlers and the steady batsmen batting 2nd as a low first innings score can make for a controlled chase requiring little risk. In the only game there this season the Renegades could only manage 148 batting first and the Stars chased it comfortably, reaching the target three wickets down with 13 balls to spare.

With the Stars lineup decimated by Australian ODI representation, they will look to their star Dwayne Bravo ($20,400) to pick up the slack. While he is priced up, he has gone over 57 in four of his five games and had a season high 94 points here against the Renegades. In a match lacking star power due to the ODI series, he appeals as an obvious option to pay up for.

Ashton Turner ($16,600) is the form batsman of the match here. He nearly got the team home against Sydney with a blistering 60 off 36 balls, and then made 47 off 30 balls against Brisbane last time. The Scorchers top order has been shaky all season and the Stars have lost a few of their top batsman so going with Turner’s class at this salary seems a shrewd move.

Will this be the match for Cameron Bancroft ($15,800) to announce his return to Australian cricket? He has been working into form in three games back now from his suspension and might be ready to explode at the top of the order against an undermanned Stars bowling attack. Being the keeper he also gets additional opportunity in the field to add to his score.

Nathan Coulter-Nile ($18,000) has taken 8 wickets so far this season and has plenty of responsibility on his shoulders with the loss of Behrendorff and Richardson to Australian duties. He has hit 40 or more fantasy points in four of his six games suggesting he is a relatively safe play but has the upside to justify his high salary. He is also very capable with the bat if he gets an opportunity and one day the Scorchers may choose to use him in a pinch hitting role because their current batting tactics aren’t getting it done.

Ashton Agar ($18,200) has the highest projection of the match and with the loss of two fast bowlers to the Australian side, he should get full opportunity with the ball to justify that high number. He was only fair against Brisbane, keeping things tidy but failing to take a wicket, but took 2 wickets in each of his previous two games. He flashed genuine upside when scoring 120 against the Hurricanes and with the loss of three players to Australian duties he will be asked to take on greater responsibility here.

It is worth mentioning Matthew Kelly ($8,200) here, who hasn’t been seen in the Scorchers lineup yet this season. He took at least one wicket in all five of his games last season, finishing with a total of 8, which explains his high projection and massive salary value figure here. He looks an obvious chance to come into the lineup to replace the outgoing fast men and appeals at a low price to fit in some of the higher-priced players.