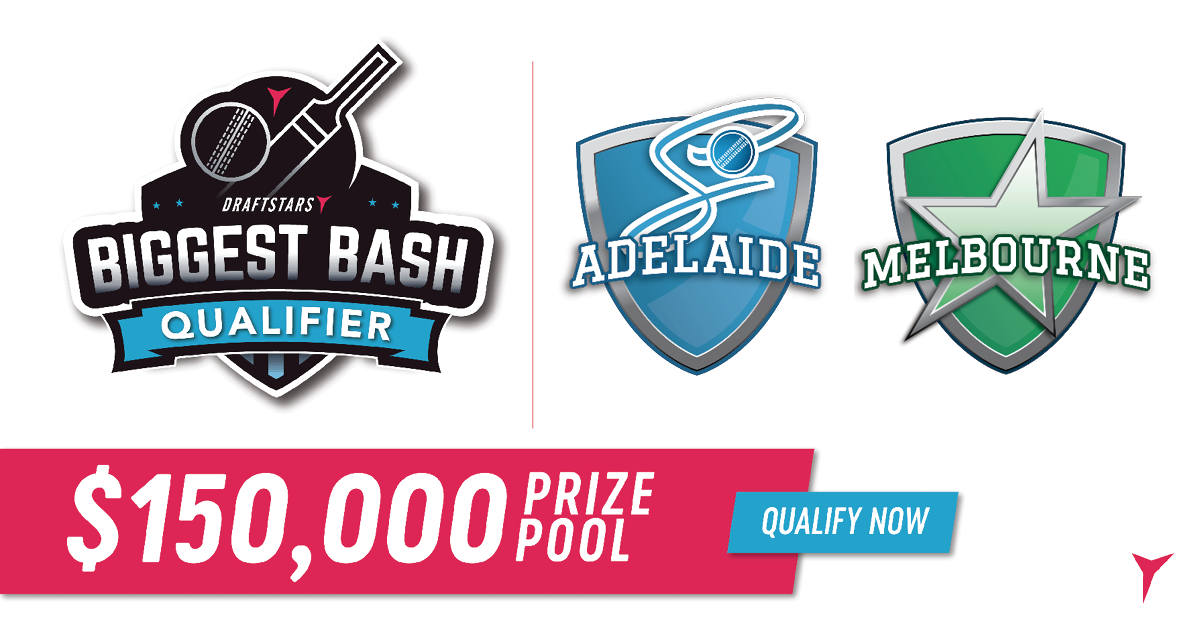 Friday night in BBL08 action sees the Adelaide Strikers host the Melbourne Stars at the Adelaide Oval. The Strikers were beaten here on Sunday night when the Sixers chased down their 150 with 6 wickets in hand and sit just inside the 4 at 3-3. The loss of their Australian representatives halted the Stars momentum on Wednesday night as they lost by 6 wickets to the Scorchers at the MCG.

The Adelaide Oval is one of the higher scoring grounds for teams batting first but the overall statistics indicate the scoring to be middle of the road. While the past couple of seasons has seen a lean to the side batting first, two of the three games so far this season have been won by the team chasing. The pitch appears to be playing very well so there is no obvious edge to either the fast bowler or the spinners

As on all the games in this BBL08 season, you can win a trip to Melbourne to compete for a share of $150,000 in the Draftstars “Biggest Bash” contest! Simply enter up to 10 lineups in the $2 qualifier and if you win you could be spending the night of the Big Bash final in style at Club 23 at Crown Casino!

Are there any players in this match you are unfamiliar with? We have full profiles on all the squads so read up on the Adelaide Strikers and the Melbourne Stars before you build your lineups.

Travis Head ($19,000) has a fantastic T20 record as captain of the Strikers and will be eager to get back in front of his home crowd after a tough Test series against India. He is usually good for a couple of overs with his tidy off-spin which can provide a second chance if he fails with the bat. With three 50s in the past two seasons from 14 hits and an average of 32, he is an obvious chance to be the highest scoring batsman in the match.

Evan Gulbis ($11,900) was promoted to the role of opener against the Scorchers and thrived at the top of the order, cracking 37 off 29 balls including a six. Presumably that will be more than enough to maintain his opening role and the Strikers bowling attack looks much less frightening with the loss of Stanlake and Siddle to Australian duties. At this salary he is very easy to play and hope he gets onto a few.

Jonathan Wells ($10,600) has been very solid all season despite having limited opportunity batting predominantly at number 5. After his last start 42 off 29 balls there has been some speculation he could move up the order and while Head comes in to replace Carey, they may look to fit the skipper at his preferred number 3 position. Given Wells has opened the batting in different forms of the game previously he may be an option to join Weatherald at the top of the order, and would obviously get a huge boost in opportunity if he got the nod.

Rashid Khan ($22,300) continues to maintain his massive projection and his class shines bright in a match decimated by Australian representation. Khan continues to score in both bowling categories and faces quite an inexperienced Stars batting lineup which he could absolutely feast on. Expensive yes, but a clear favourite to be the highest scoring player of the match.

Dwayne Bravo ($20,600) is the headline act for the Stars and continues to perform exceptionally with the ball, taking 2/18 off his four overs last game. The thing that is holding his scores back is his lack of opportunity with the bat – he hasn’t made a run in the past three matches and didn’t make it to the crease in two of them – so he potentially has massive upside on his current 60 point average if he can get a hit. The Stars batting lineup is inexperienced so you would have to think it will come sooner or later.

Ben Laughlin ($10,400) missed the last game due to “resting” so you would think he would be fresh and hungry on his return to the side. A bowler with his tricks is going to take wickets sooner or later and this might be your chance to cash in on him at a low salary with potentially lower ownership. The Stars batting lineup lacks quality and that might be just the thing to kick start Laughlin back into form.