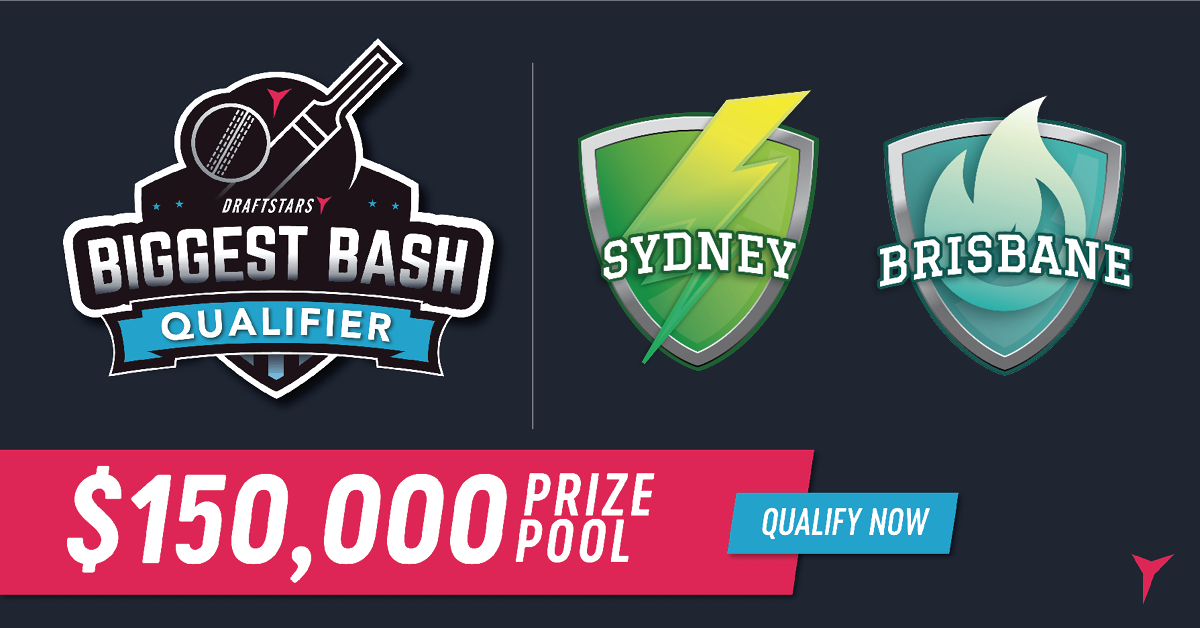 The Sydney Thunder return to their home ground of Spotless Stadium to take on the Brisbane Heat in Tuesday night’s BBL08 action. The Thunder were beaten by 8 wickets by the Melbourne Stars on the Gold Coast on Saturday night but won a thriller at this ground against the Perth Scorchers prior. The Heat won their first game of the season in Perth on Saturday night and will be looking to build on that momentum here.

Read our interview with Jason Knox aka “Knoxinator”, who proved you can win with just one $2 entry, or take a look at our chat with Shaun O’Neill aka “THE_BEARD” who won his way in after entering three lineups while at the pub! We also spoke with “Donkey” who is very happy he won his entry but a bit less happy about revealing his identity!

Unfamiliar with some of the players in this game? We have full profiles on the squads of all eight Big Bash teams, so you can read up on the Sydney Thunder or Brisbane Heat prior to building your lineups.

Spotless Stadium is one of the lowest-scoring venues in the country when it comes to BBL, producing the second-lowest runs per wicket and lowest runs per over figure of all the major grounds. Batting first has often been an advantage as the pitch can slow up as the match wears on and the figures back that up, so targeting batsmen early and bowlers late in the game may have some merit. In the first game here this season the Thunder put up 169 and never looked like being beaten, with only some late hitting from the Sixers getting them within 21 runs. Things were a bit closer last time when the Scorchers got within one run of the Thunder’s 142 total despite never looking likely until the final stages.

Chris Lynn ($19,400) has clearly the highest projection of the match here and seems very reasonably priced considering he is generally over the $20k mark. He showed two games back how damaging he can be with 84 off 55 balls against the Sixers, scoring 125 fantasy points. The concern for him here is his record against spin – the Thunder will throw plenty of slow bowling against him on a pitch conducive to the turners and that is his weakness. If he gets the eye in he can put them to the sword but you can definitely make a case for fading him on the slower deck.

If you want to pay up for a batsman then maybe Jos Buttler ($18,100) is a better option given his love for this ground. He has smashed 63 and 55 in his two hits here this season and will no doubt be keen as mustard in his last match for the Thunder before he returns to the England side. The Heat bowling attack holds few fears so Buttler stands out as the safest batsman in the match.

Max Bryant ($13,400) has burst onto the scene in BBL08 in tremendous style, averaging 38.6 fantasy points per game in his first season. He has claimed the full strike rate bonus in his past three hits and has hit five sixes this season so he only needs to get to 30 to return value at that rate. His upside is tremendous if he can stay at the crease.

The obvious targets here are the spinners. Fawad Ahmed ($15,100) has been dominant at this ground this season, scoring 70 and 97 fantasy points in his two outings with 5 wickets. His performances at other grounds have kept his average down to a tick over 38 so that might help keep his ownership down but he is a great play at this ground.

Chris Green ($15,300) can contribute with both bat and ball and generally won’t kill your lineup for that reason with a low score of 27 in his six games this season. On the flip side, his highest score has only been 78 so you could argue his upside is limited, especially if the Heat bowlers don’t trouble the Thunder top order.

Mujeeb Ur Rahman ($16,000) has been priced up after consistent performances with the ball, scoring over 50 points in three of his four matches. He bowled a stunning spell in Perth, taking 2/10 off his four overs, and should relish getting onto a pitch with assistance for the spinners for the first time this season. He holds the key to the Heat’s chances and is a worthy play at this salary.

Mitchell Swepson ($12,900) gets the same boost here that we mentioned above with Mujeeb – he finally gets to bowl on a wicket that provides something for the spinners. After a promising 1/27 in his first match he has copped plenty of stick in his past two matches and was left out for the Perth game. If he comes back into the side he gets his chance to improve at what should be low ownership.