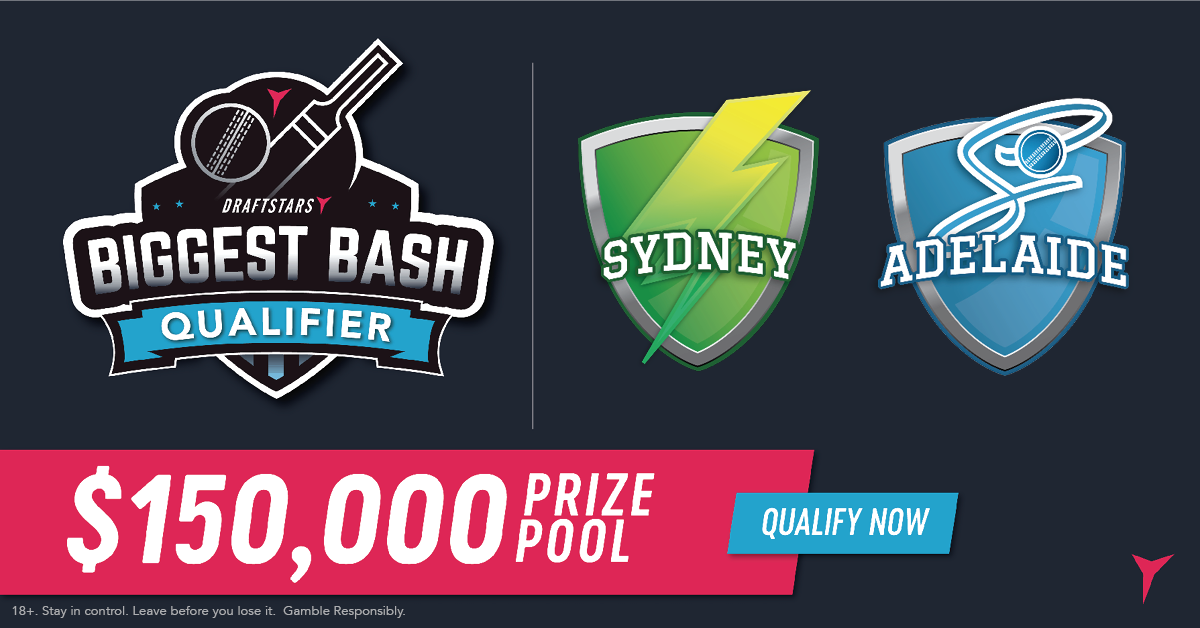 Sunday is a huge day in BBL08 with three games back to back, kicking off with the Sydney Thunder taking on the Adelaide Strikers at Spotless Stadium. The Thunder have lost their last two, including a rain-affected loss here to the Heat last time, to drop to 3-4 and will be desperate for a win on their home deck. The Strikers cleaned up the Stars on Friday night to get to 2nd on the ladder at 4-3 and can consolidate their spot in the top 4 if they go home winners.

Spotless Stadium is renowned for being one of the lowest scoring venues in the country but the Heat were able to knock up 186 here last time. The previous matches saw three out of four scores in the 140s so the Heat score looks a bit of an outlier and targeting bowlers – especially the slow men – looks a reasonable theory to stick with.

The Draftstars “Biggest Bash” contest qualifiers are the talk of the Australian DFS industry and you can win your way in on this match. Simply enter up to 10 lineups in the $2 qualifier and if you win you could be spending the night of the Big Bash final in style at Club 23 at Crown Casino, playing for a share of $150,000!

See how easy it is to win with our interviews with some of the earlier qualifiers:

Check out our previews of the Sydney Thunder and Adelaide Strikers squads to make sure you are familiar with all of the players named before you build your lineups!

Callum Ferguson ($13,500) has the big responsibility of the middle order for the Thunder with the departure of Joe Root. Whilst Root didn’t do much in his time at Sydney, Ferguson looked good in the limited time in the Heat game before the rain hit and has looked the most capable of all the Thunder batsmen against the slower bowlers. Ferguson scored 47 runs against the Strikers in Adelaide on New Year’s Eve, playing Rashid Khan as well as anyone has so far this tournament. His salary will make it a little easier to squeeze in the big spinners and he is a worthy selection.

Travis Head ($20,500), like Ferguson, will look to bat throughout the Strikers innings with the likes of Weatherald and Ingram swinging around him. The captain of the Strikers will be looking to build on his indifferent form from the Test series and free his arms against the Thunder attack. Head was the 4th highest scorer in BBL07 at an average of 53 and a strike rate of 133 and tuned up nicely against the Stars with 43 off 31 balls.

Anton Devcich ($11,000) is your classic big hitter who either gets out 1st over or goes for big runs in little amount of time. The Thunder are likely to throw Devcich into the top of order and say have a go to replace the role of departed English representative Jos Buttler. Currently his form in the Super Smash in New Zealand is not great but he does open the bowling for the Northern Districts with his left arm tweakers, picking up a wicket in 4 out of 5 recent games. If he opens the batting and is asked to roll his arm over he will get a stack of opportunity to cash in on his low salary.

Rashid Khan ($22,300) is the man and continues to dominate his opposition, taking 1/18 against the Stars of his four overs and hitting a quickfire 13 off 9 balls. He will be giggling when he turns up to this Spotless Stadium pitch and is the obvious choice to top score the match once again. Even aside from his bowling, his hitting continues to receive notice and a pinch-hitting role becomes more likely by the game, providing further opportunity for fantasy points.

Fawed Ahmed ($15,100) is “almost” an automatic selection at Spotless. He has taken 7 wickets in his last three matches at the ground, but owners would also love to get the economy bonus as he has leaked runs this tournament. You will also get Fawad at a big discount to Rashid Khan who will be highly owned (and deservedly so), but fitting both into your side looks the play if you trust Spotless to suit the spinners again.

Chris Jordan ($12,800) is the new replacement for the Thunder as they farewelled Jos Butler and Joe Root to national duty. Jordan has been playing in the recent T10 tournament in Pakistan and the Super Smash in New Zealand and has made a very solid career in this form of the game. He is likely to bowl over at the death and can swing the bat hard in the lower order if required. His good form in last years BBL is replicated in his above average projection and a solid game would be enough to hit value at this salary.