NBA Christmas Day edition (Boxing Day AEST) brings us a sensational 5 game slate. There are some massive DFS tournaments at DraftKingson offer to celebrate the occasion kicking off at 4am AEST (for the serious DFS player):

The marquee game on this slate that the audience will be looking to is Lebron and the Lakers heading into Oracle to play the Golden State Warriors. This matchup also brings the biggest game total on the slate and the only one over 230 points.

It is worth noting however that the Lakers at Warriors and the second highest game total in the Milwaukee Bucks at New York Knicks have significant lines indicating a blow out risk. Therefore it might be worth targeting games further down with Philadelphia at Boston and Oklahoma City at Houston both have game totals over 220 points but much closer lines.

Portland at Utah has a miserable 214.5 point game total but on a five game slate it might be worth targeting as a contrarian play in big tournaments.

Golden State are in the pace up matchup of the night and to along with the biggest game total they are implied for +6.0 points above their season average, the biggest differential on the slate.

Houston are also in a significant pace up matchup against Oklahoma City who play at the 5th fastest pace in the league this season, however they also have the second best defensive efficiency rating in the league making for a tough matchup.

JaVale McGee has been ruled out on this slate and Tyson Chandler is questionable. This means everyone's newest favourite centre Ivica Zubac (DS $5,000, DK $4,400) should get another start.

Wilson Chandler is questionable on this slate. If he is out we can expect Mike Muscala (DS $6,760, DK $4,200) will likely start again.

Kevin Durant is probable on this slate. It seems as if he is 99% certain of playing but if he doesn’t it opens up a lot of opportunity for the Warriors other stars given Durant has averaged 36 minutes at a 32% usage rate this season. Durant has yet to miss a game this year, but when he has been off the court Stephen Curry (DS $18,280, DK $9,000) and Klay Thompson (DS $12,080, DK $6,700) have been the biggest beneficiaries with a usage increase of over 10% each.

Ivica Zubac (DS $5,000, DK $4,400) is the most obvious value play on this slate and almost a lock and load play given he is likely to get the start again. He has played over 30 minutes in each of the last two games and averaged a massive 35.9 fantasy points.

Al-Farouq Aminu (DS $8,390, DK $3,900) has been priced way down after a poor run of form recently. He is far too cheap for a player that is going to see in excess of 30 minutes and particularly on a 5 game slate that is light on in value Aminu makes for a great play given his 40 point upside. Utah isn't the best matchup as the 7th best defensive team in the league this year. Aminu played Utah two games ago and managed just 10 fantasy points but one positive was he scored 10 points while shooting just 1-10 from the floor, if he will only need to make a few more shots to return value.

Jerami Grant (DK $4,500) has been my break in case of emergency value play all season long, especially in cash games. He consistently returns 20+ fantasy points and has 40 point upside to help win you a GPP. On this slate he has a reasonable matchup against the Rockets who have given up the 7th most points to power forwards over the last 10 games. 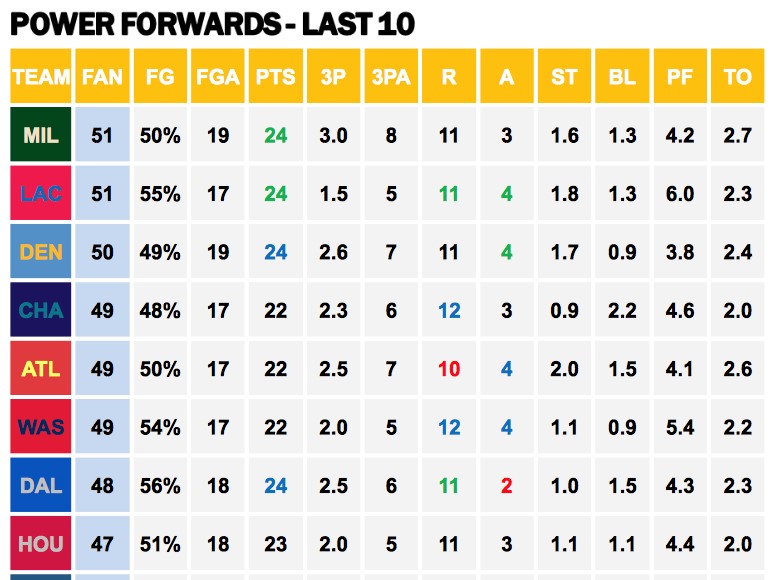 Jimmy Butler (DS $13,050, DK $7,000) while I continue to lose money rostering him, I have come too far to turn back now. This is a sneaky GPP play only but Butler brings 60 point fantasy upside and I like him as a big game player, which suits the narrative of the Christmas day games on national tv. Furthermore, Boston have been giving up the seventh most fantasy points to small forwards over the last ten games. 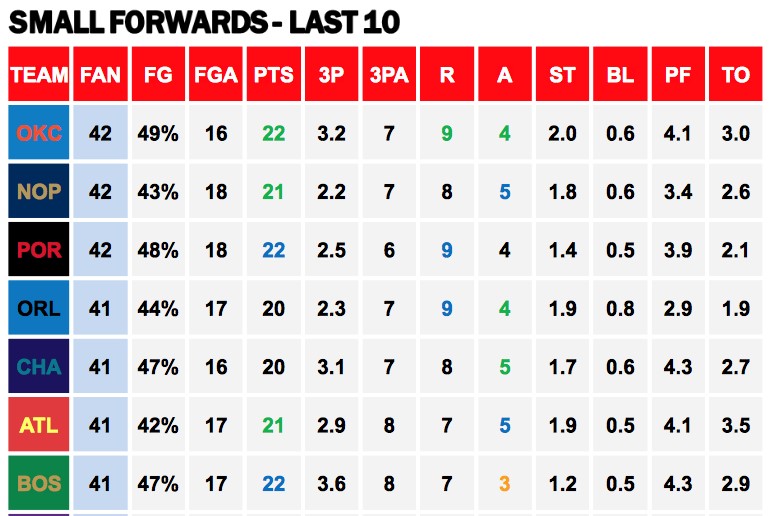 Eric Bledsoe (DK $6,800) has loved to play the New York Knicks recently going over 40 fantasy points the last three times he has played them. He has been priced down to under the 7K mark on DraftKings, which is the price range I love to roster him in and the matchup is ideal with the Knicks ranked 2nd last in defensive efficiency this season.

Brandon Ingram (DS $9,400, DK $5,300) is still far too cheap since returning from injury. In the first two games back he has averaged 30 fantasy points, including managing 29 points against the snail pace defensive orientated Memphis Grizzlies. On this slate he will have an uptempo matchup against the Golden State Warriors and the highest game total on the entire slate.

Klay Thompson (DS $12,080, DK $6,500) has the best matchup in the league for his position against the Lakers who have given up the most fantasy points to shooting guards this season. Klay’s price has dipped since Curry and Green returned to the lineup and he has shot 2/15 from three over his past three games meaning he will be due for another positive regression. Typically we see this in the form of a flame throwing out burst that can lead to upwards of 60 fantasy points.

James Harden (DK $10,900) will be the most popular premium play on this slate. With Chris Paul out this season Harden has averaged +13.8 fantasy points on his season average from 3.8 extra minutes and 4% usage increase. He has had just 1 game under 66.5 fantasy points in his last 6 games but has yet to see a major price increase. 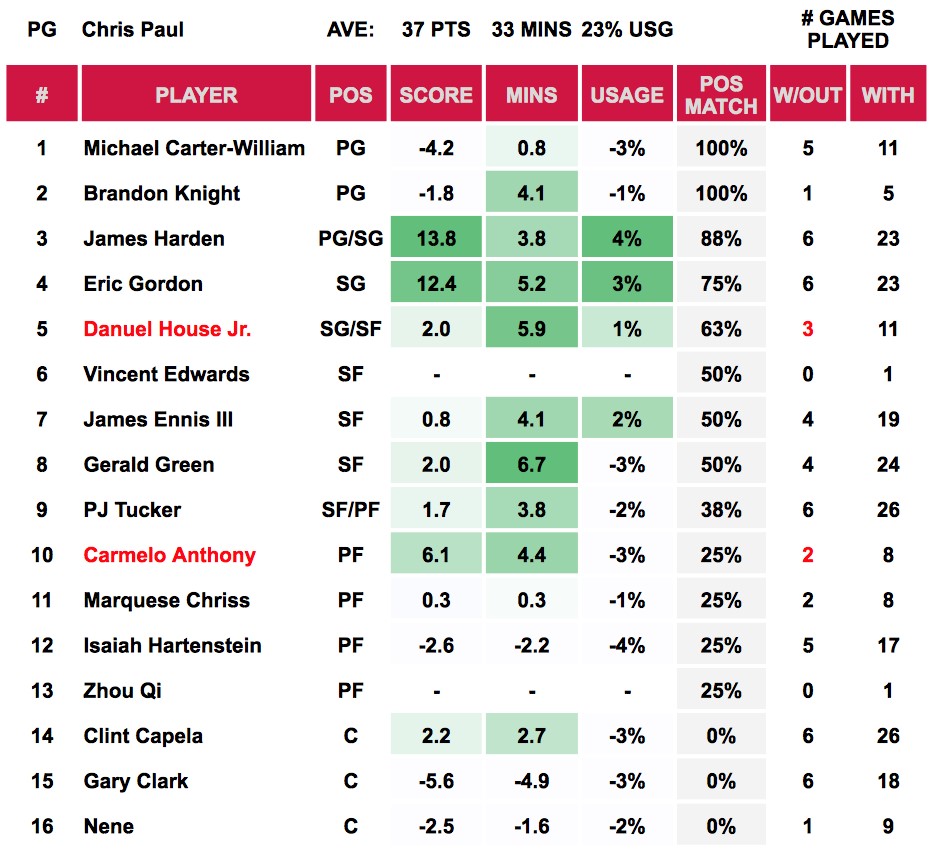 Dame Lillard (DS $18,200, DK $7,800) is my undercover premium play on this slate. As I mentioned in the game breakdown this matchup has the lowest total of the day and will likely go largely ignored. Furthermore Lillard has received a price reduction to his lowest price of the year primarily due to the matchup. But point guard is one of the positions that Utah can be attacked at given they have been around league average in conceding points to the position this season.