Game Four of the NBA Finals is set to tip off on Friday (Saturday AEST). A huge match in the context of the series as the Golden State Warriors attempt to even up the series at 2-2 with a win, while the Raptors could all but put the nail in the coffin if they can get another victory in Oracle .

There are several major DFS tournaments on offer for Game Four, including: 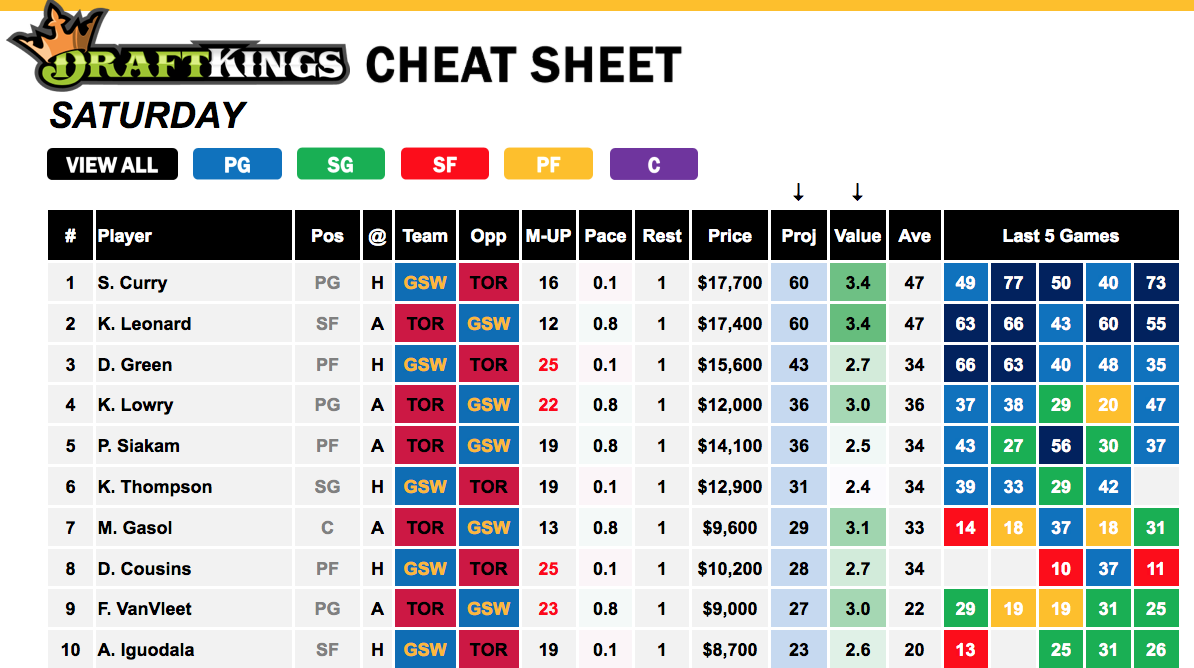 Kevin Durant has been ruled out of Game 4 already. We have a solid sample of games in the playoffs now without Durant and no surprise it has been the other three stars for the Warriors, Steph Curry, Klay Thompson and Draymond Green, who have received a significant uptick in output.

Andre Iguodala is the fourth player to see an increase in fantasy output, scoring 20+ fantasy points in 6 of the 8 games Durant has missed during the playoffs.

Klay Thompson is expected to play in Game 4. If he was to miss another game it was quite clearly Curry who took over the bulk of the usage without Thompson in the lineup. Curry posted 71 fantasy points and got up 31 field goal attempts in Game 3. Shaun Livingston got the start but only played 17 minutes, while Quinn Cook logged 27 minutes.

Kevon Looney was thought to be out for the rest of the series, but news came out today that he might become available after a second opinion (translation “give him a jab and hope for the best”). If Looney does play it will eat into DeMarcus Cousins and Andrew Bogut's minutes who played 19 and 22 minutes respectively in Game 3.

Fred VanVleet (DK $9,000, DS $7,920, MB $6,000) has been the revelation of the series. Not only has his hot shooting that helped key the Raptors close out the Bucks in the Eastern Conference Finals continued, he has also been their best defender on Curry. VanVleet moved into the starting lineup to start the second half of Game 3, which is worth monitoring when the lineups come out for Game 4.

In the series VanVleet has averaged 34 minutes per game and returned 25 fantasy points per game making him one of the safest value plays on the slate.

Andre Iguodala (DK $8,700, DS $7,560, MB $6,000) as mentioned above has see a huge increase in production since Durant went down with injury in the Western Conference Semifinals. With the Warriors being extremely thin on the perimeter beyond the starters and requiring defenders to matchup with Kawhi they have pushed Iguodala’s minutes to the limit.

During the Finals he has averaged just under 30 minutes per game and returned an average of 27 fantasy points.

Pascal Siakam (DK $9,400, DS $10,360, MB $8,000) has solidified himself a legitimate star in this finals series after having a breakout season in 2018-19. He has given the depleted Warriors matchup fits by posting up any defender not named Draymond Green. He has been playing 40 minutes a game and returned over 40 fantasy points per game in this series.

Kawhi Leonard (DK $11,600, DS $15,830, MB $11,000) has been my premium selection in every game so far this series. He has only one the battle against Curry from a fantasy perspective in 1 of the 3 contests so far. That said his consistency is as solid as you will find with an average of 52 fantasy points in the series with low score of 43. 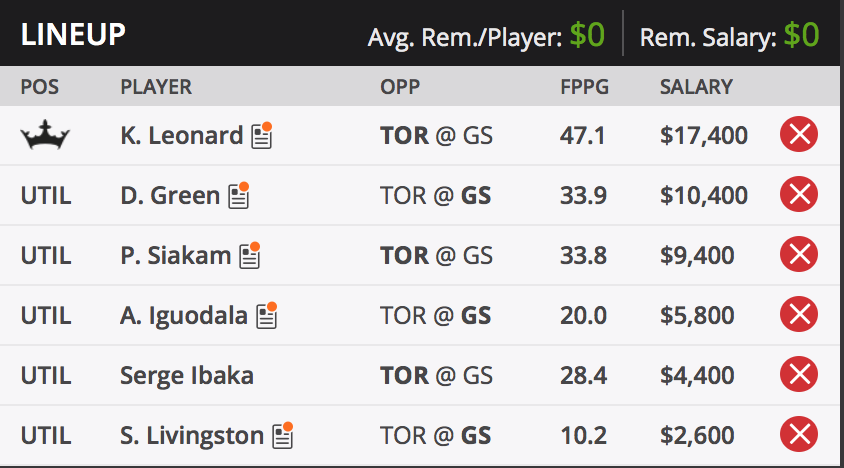