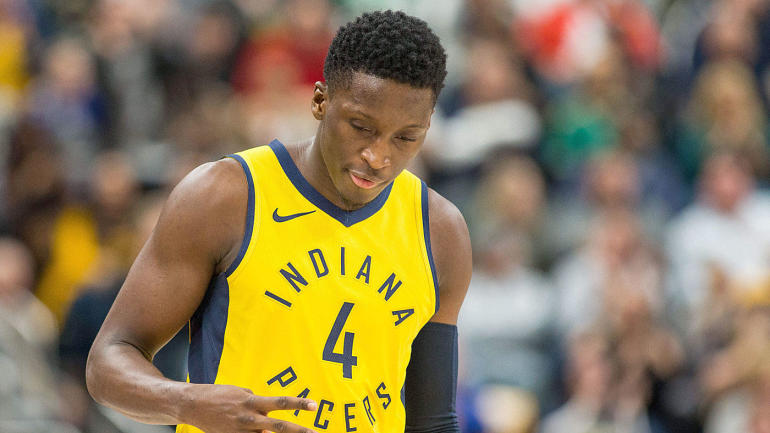 NBA Friday (Saturday AEST) brings us a manageable 9 game slate this week. The usual major DFS tournaments are on offer:

A lot injury news yet to hit on this slate with three games yet to have game totals and lines set. Fortunately I would not expect any of these three games to have one of the total totals. We will cover the impact of injuries on this slate below.

There are four games with game totals over 224.5 points, headlined by the Golden State Warriors vs Sacramento Kings massive 235.5 points. Golden State games are always a difficult target when they have a full roster on offer but they have one of the best matchups in the league vs Sacramento.

Of the four high total games Washington vs Brooklyn has the closest line at 1.5 point making it one of the most attractive games on the slate given the other three have lines of 8 points or higher.

The Boston Celtics have the biggest pace up matchup on this slate as they matchup with Atlanta who are the fastest team in the league this season. Beware of this matchup as these teams played each other on the 23rd of November and a blowout limited minutes to within the 20s for the starters.

Brooklyn should be one of the sneakier matchups on this slate playing pace up vs Washington and featuring an implied total 4.5 points higher than their season averaged.

Al Horford wont play against the Atlanta Hawks and Jaylen Brown remains questionable. Aaron Baynes (DS $6,030, DK $4,200) and Daniel Theis (DS $6,980, DK $4,400) have been the biggest beneficiaries this season when Horford has missed games, however Baynes has been on minutes restrictions while Theis minutes can fluctuate significantly. Marcus Morris (DS $10,940, DK $6,500) would be my favorite target however his price has gone way up after recent strong performances. 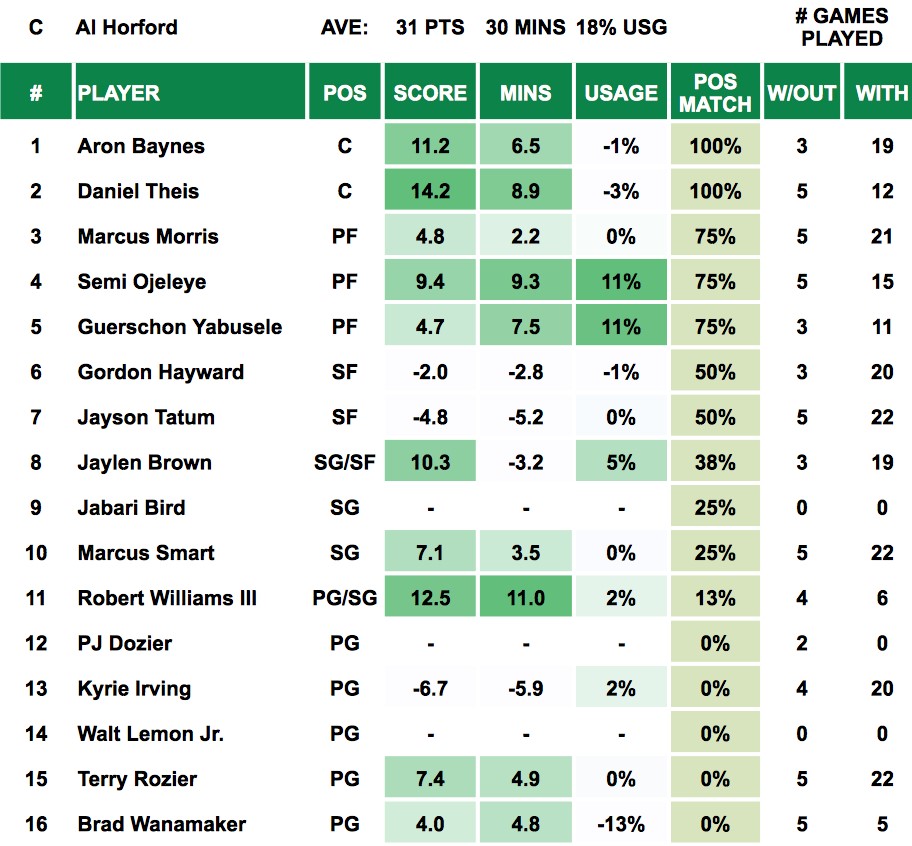 Tristan Thompson has been ruled out for 2-4 weeks. This means more opportunity for Larry Nance (DS $10,960, DK $6,200) who scored 39 fantasy points last match, however his price has also increased significantly limited the value he can return on this slate.

Kawhi Leonard is questionable for the match with Portland. Jonas Valanciunas is out at least four weeks. Kyle Lowry (DS $14,250, DK $8,200) has been an absolute monster in games with Kawhi this season averaging a massive 16.3 points above his season average from a 6% usage increase. His price has risen after two straight strong games with Leonard out however he still looks to be a great play if Leonard misses again. 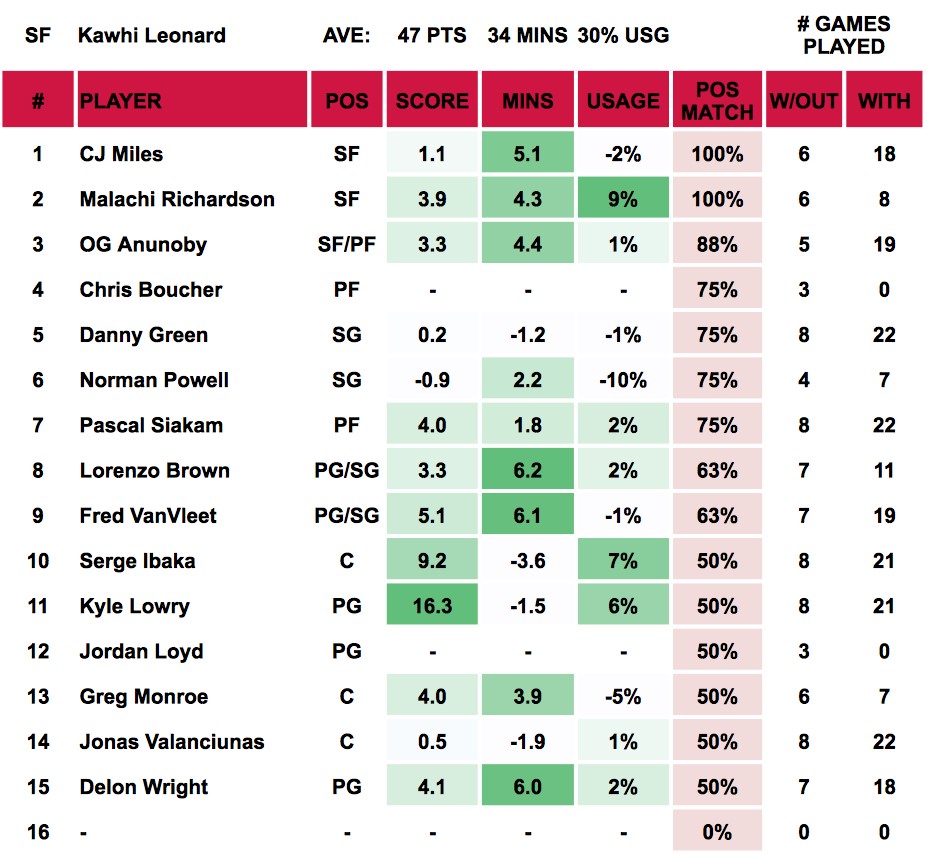 Furkan Korkmaz (DS $8,720, DK $3,800) will make for an elite value play again on this slate if Jimmy Butler is out. He is particularly priced well on DraftKings. If Butler returns however I wouldn't advise playing him, monitor the news close to tip.

Aron Baynes (DS $6,030, DK $4,200), if he no longer has a minutes limit, would be one of my favourite value plays on this slate. The Celtics are matched up against Atlanta who play at the fastest pace in the league and have given up the 6th most points in the league to the centre position this season.

Marcus Smart (DS $9,100, DK $4,700) benefits from the same positive matchup as Baynes above. The Hawks have given up the most points in the league to the shooting guard position this season. Smart is playing high 20s to low 30s in minutes since moving into the starting lineup.

De’Aaron Fox (DS $14,050, DK $7,000) as per usual is one of my favourite plays on this slate. His price dropped on DraftKings after his last match and on this slate he is in the highest game total. He also draws a matchup with Steph Curry who has had a negative defensive RPM throughout his career.

Klay Thompson (DS $12,460, DK $6,200)  has seen a price decrease now that the Warriors have every healthy again. He has huge upside in any matchup and this slate presents the perfect opportunity to take advantage of that with Sacramento playing at the second fastest pace on the slate, giving up the 6th most points to shooting guards over the last 10 games and conceding the most three pointers to the position this season. 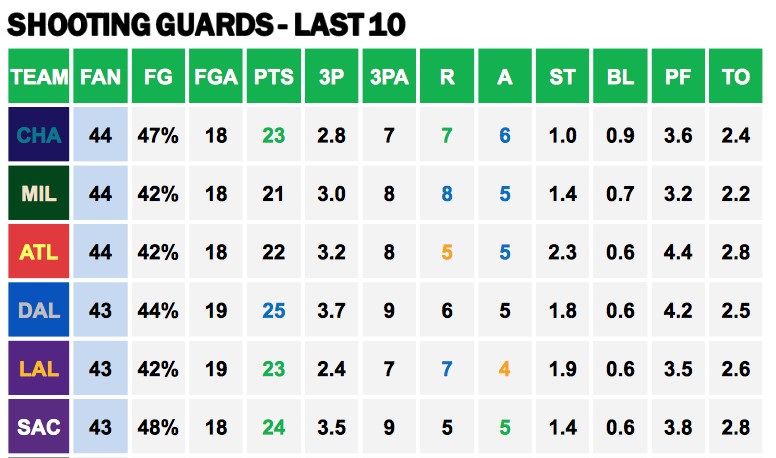 Jaren Jackson Jr. (DS $9,280, DK $5,800) is in play for me anytime his price drops into this range. He has flashed close to 50 point upside this season already and vs Miami has an opportunity to pick up peripheral stats with the Heat giving up the third most blocks to the power forward position this season.

De’Angelo Russell (DS $12,230, DK $7,300) has the best matchup in the league for his position on this slate with the Washington Wizards giving up the most fantasy points to point guards this year. Russell is typically a GPP play only giving the risk of losing minutes to Spencer, however it is hard to avoid having exposure to him on this slate. The Wizards are not only one of the fastest teams in the league they are also ranked 27th in defensive efficiency.

Victor Oladipo (DS $14,620, DK $8,500) as a result of injury has seen a price decrease. He is currently too cheap for a player averaging over 40 fantasy points this season. He has a pace up matchup on this slate against Philadelphia who play at the 8th fastest pace in the league this season.

Russell Westbrook (DS $19,460, DK $10,800) is my undercover premium play on this slate. You should pick him up at low ownership given the matchup and his recent performances. But Westbrook has 70 point upside against anyone in the league, he has been shooting a career low this season, which at some point will start evening out. In addition when they played Denver recently Westbrook had a triple double and managed 50 fantasy points despite shooting 6/23 from the field.