A loaded slate from a DFS perspective with four games with totals of 229 points or higher. Out of those four only one game has a line lower than 7.5 points, Charlotte at Washington. Finding games that are expected to stay competitive at this time of the year can be key to DFS success so this game is the most attractive on this slate.

Los Angeles at Detroit is yet to have a game total or line set yet as we await player news. All injury news expected to impact the slate is covered below.

Portland are in the pace up matchup of the slate against New Orleans who have played at the 4th fastest pace in the league this season, and have ramped this up recently playing at the fastest pace over the past 15 games. They also hold to largest positive point differential in their implied total compared to their season average at +7.5 points.

Philadelphia are also in a significant pace up matchup against Sacramento who have played at the fastest pace in the league this season. The line in this game has been set at 9 points indicating blowout potential, however Sacramento have been competitive all season so I believe this game should still be targeted.

Cody Zeller is doubtful for the match on this slate. In the games Zeller has missed this season it has been Bismack Biyombo (DS $5,000, DK $3,000) who has been the biggest beneficiary averaging +10 fantasy points from an additional 9.5 minutes of playing time. Willy Hernangomez (DS $7,620, DK $3,200) and Frank Kaminsky (DS $8,730, DK $4,500) should also receive additional playing time, monitor news for who is expected to start if Zeller is ruled out. 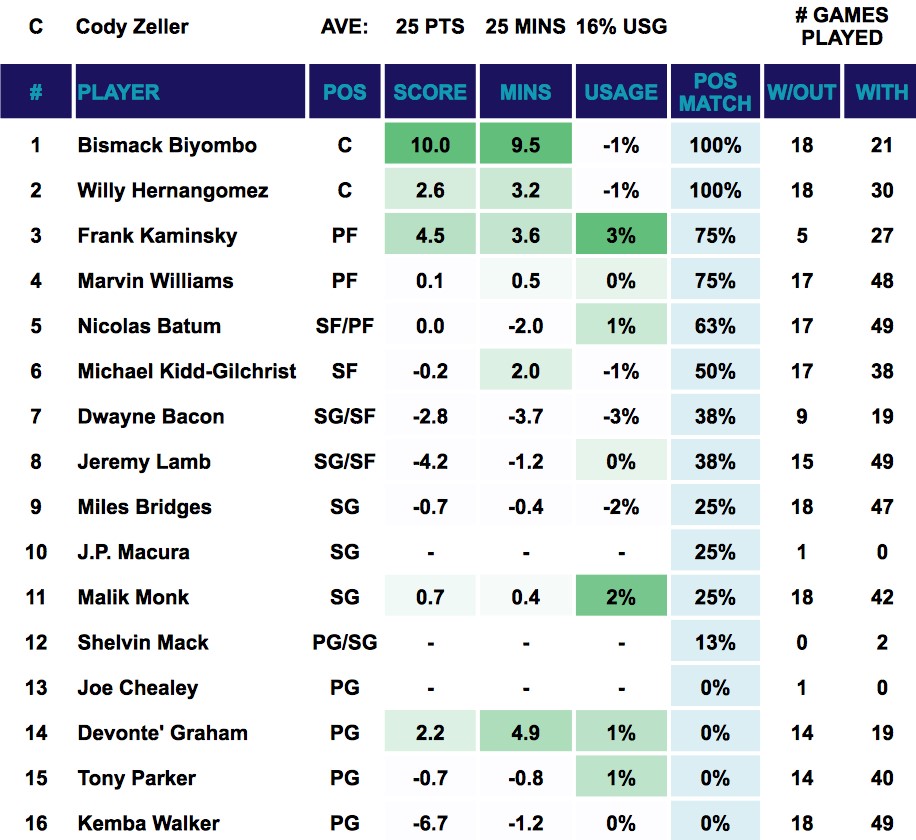 Reggie Jackson is a game time decision on this slate. Jackson has yet to miss a game this season, however it should mean Ish Smith (DS $7,980, DK $3,900) would move into the starting lineup and get a boost in playing time. Smith has averaged 0.81 fantasy points per minute this season, if he can get close to 30 minutes he becomes a lock and load play. 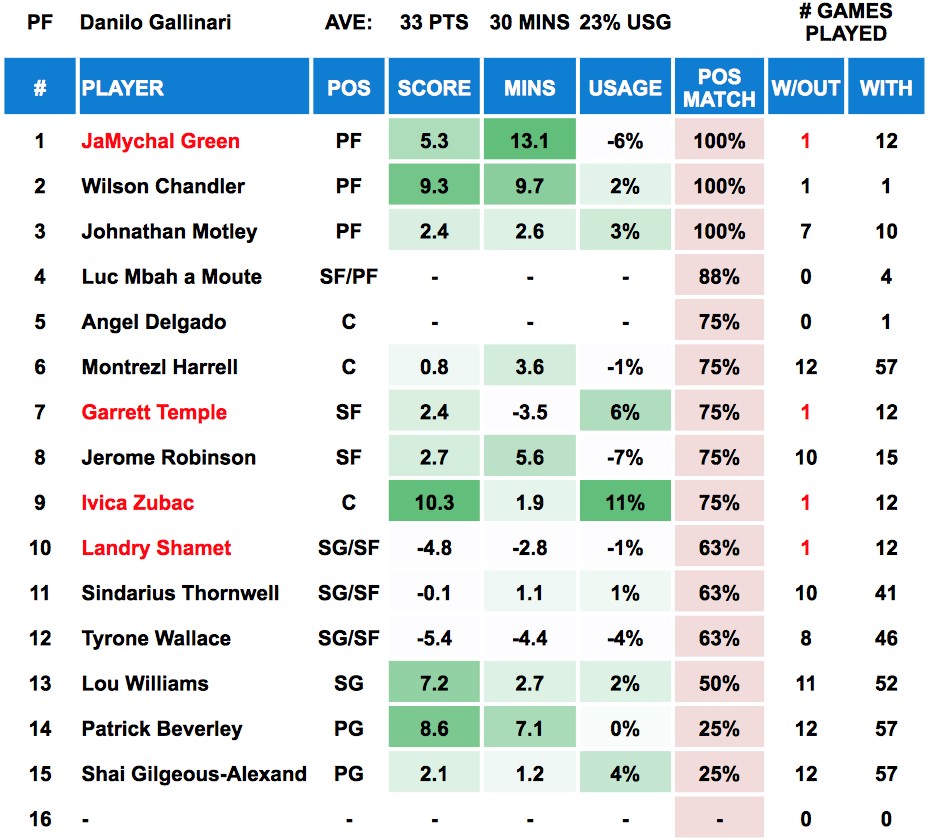 Javale McGee (DS $8,770, DK $4,400) should be required to play a significant amount of minutes in this matchup to combat the Pistons front court, in particular Andre Drummond. While McGee is a GPP punt only it essentially comes down to playing time for him given his strong fantasy point per minute production (1.17 points per minute). If he plays over 30 minutes as he did two games ago he should comfortably return value.

Al-Farouq Aminu (DS $8,710, DK $4,100) has been a let down fantasy wise during the second half of the season. On this slate however he has the opportunity to reach his ceiling of 40+ fantasy points in a pace up matchup that suits his game style. The Pelicans have been playing at the fastest pace in the league over the last 15 games and given up the 6th most fantasy points to the power forward position over the past 10. 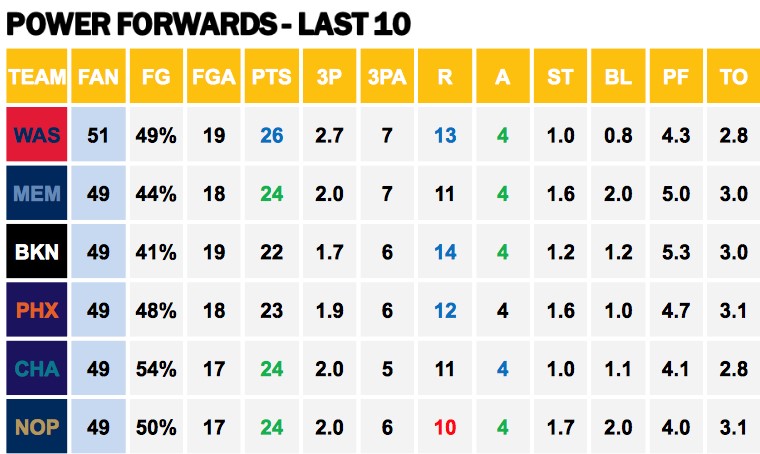 De’Aaron Fox (DS $13,820, DK $6,900) is priced at a solid value and is in the second highest game total on the slate. He has topped the 40 fantasy point mark in each of his last three games and should be a lock to do so again on this slate.

Bobby Portis (DS $12,510, DK $6,100) has been coming through for me everytime he draws an elite matchup, and on this slate it doesn’t get any better. Charlotte have given up the most fantasy points in the league to centres over the past 10 games. If Ariza is out he becomes a lock and load play as it should ensure Portis gets 30+ minutes in playing time and he has averaged 1.15 fantasy points per minute this season. 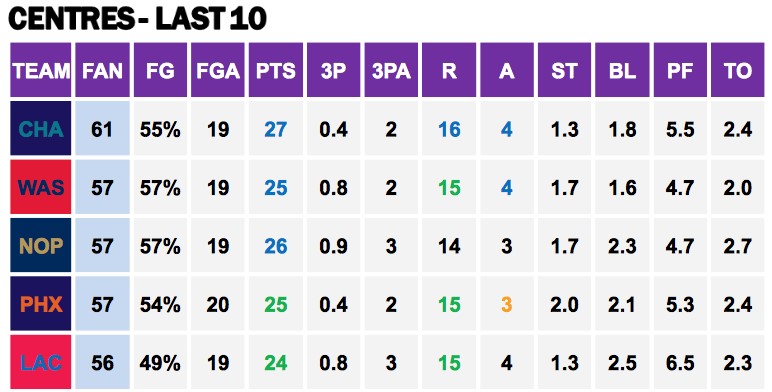 Joel Embiid (DS $19,560, DK $9,900) is still underpriced since returning from injury and through those two games has returned reasonable value going for over 52 fantasy points in each. On this slate he matches up against the Kings who have given up the 4th most fantasy points this season and play at the fastest pace in the league. Embiid’s ceiling over around 80 fantasy points is in play on this slate.

Blake Griffin (DS $16,080, DK $7,700) has been in a slump recently with his price coming way down. On this slate he matches up against the Lakers who have given up the 7th most points to power forwards over the last 15 games, and are ranked 29th in defensive efficiency over that same period. This is the ideal bounce back matchup for Blake and at this current price point his ceiling offers GPP winning value.

Jusuf Nurkic (DS $14,060, DK $7,400) also offers a GPP winning ceiling at his current price and on this slate draws the fastest paced team in the league over the last 15 games. The Pelicans have also been destroyed by centre giving up the third most points in the league to the position over the past 10 games.