NBA Friday (Saturday AEST) brings a 6 game slate, which is the perfect size during this time of year to try and negotiate all the madness going on. The usual major DFS tournaments are on offer:

Several juicy totals on this slate, however as usual for this time of year the challenge is navigating the blowouts. Two of the top three contests have lines of 9.5 points or higher, but we can’t just rules those games out as with all the bizarre lineups being thrown out there as the season draws to a close means that value plays will often still play after the game gets out of hand.

The best game to target on this slate is Portland at Atlanta with the highest game total at 233.5 points. What makes this match even better is due to the Portland injuries and the fact that Atlanta continue to play inspired basketball and show no signs of tanking, the line is just 3 points.

Sticking with the above theme Portland have the highest pace up matchup on the slate against the Hawks who have played at the fastest pace in the league this season. The other game to consider on this slate is Charlotte at the L.A. Lakers. The Lakers have played at the 4th fastest pace in the league this season and are unlikely to be playing any defense at this point in the season (21st in defensive efficiency over the last 15 games).

Paul George is questionable on this slate. Dennis Schroder (DS $5,300, DK $9,900) has been the biggest beneficiary in games George has missed this season averaging +8.3 fantasy points from an extra 7.5 minutes of playing time. Surprisingly, Russell Westbrook (DS $19,400, DK $10,700) has scored worse in games George hasn't played this season. 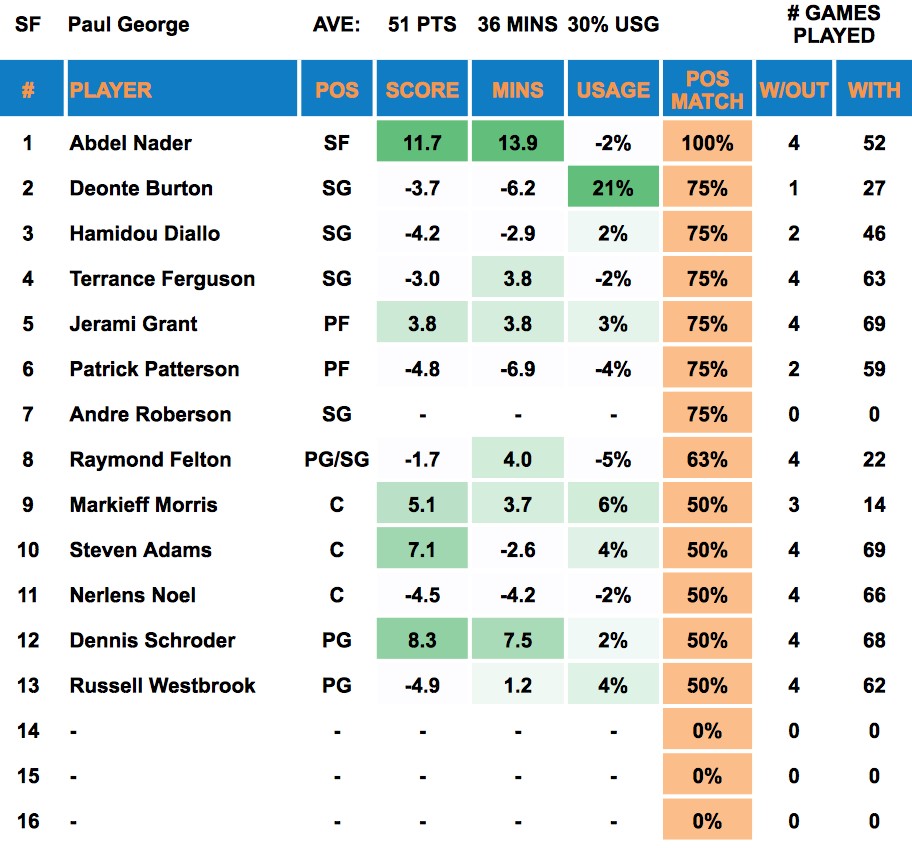 The other major players to highlight are all probable and thus expected to play at this stage, However, monitor news on Kyrie Irving, Al Horford and Lebron James.

Al-Farouq Aminu (DS $8,130, DK $4,700) is a value lock for me on this slate. If the game stays close as it is expected to, Aminu will be locked into 30 plus minutes with the key Trailblazers injuries. He should also see a significant uptick in rebounds, In the first game without Nurkic he had 11 rebounds in just 23 minutes of game time.

Jamal Murray (DS $11,100, DK $5,900) is in what should be an ultra competitive game Murray has been well priced against a side that has played at the 5th fastest pace in the league this season. Murray brings a massive 60 point upside, which is a GPP winning return at his current price point.

Rudy Gobert (DS $14,570, DK $7,800) is matched up against the Wizards who are ranked 27th in the league in defensive efficiency this season. They have also given up the 8th most points to centres on the year and will be defending Gobert with a diet of Bobby Portis and Thomas Bryant. While this matchup has blowout potential I would still put Goberts floor at around 40 points in this matchup.

Javale McGee (DS $15,110, DK $7,000)... Wait… go back to the start of the season and picture someone telling you to play McGee at a $7K price point. Would you have laughed or punched them? But it is true, the point per minute monster is now logging 30 minutes per game and the results are an average of 46.9 fantasy points over the past 5 games. On this slate he draws Charlotte who have given up the third most points to centres over the last 10 games.

Damian Lillard (DS $18,580, DK $10,100) is the top premium play on this slate. He is in the top matchup of the day against Atlanta who play at the fastest pace in the league and have given up the most points in the league to opposition point guards over the last 10 games. Furthermore as a result of the injuries to both CJ McCollum and Jusuf Nurkic he will have all the usage in the world. With those two players off the court this year Lillard has seen an unbelievable 12.3% usage increase this season, resulting in a +13.5 fantasy point increase per 36 minutes.