NBA Friday (Saturday AEST) brings us a 9 game slate to attack. The usual major DFS tournaments are on offer:

This slate has a clear set of games to attack with the top four game totals over 230 points while the next four are all under 220. Oklahoma City at the Clippers is the top total on the slate at 236.5 points with both teams playing at a top five pace in the league over the past 15 games. The Thunder have also conceded the 5th most fantasy points over this time. The line is set at just 1.5 points indicating we should be in for barn burner.

The Washington at Charlotte matchup is my next favourite game on this slate with a total of 234 points and line of 5. Washington have given up the 4th most fantasy points over the past 15 games while Charlotte have ranked 26th in defensive efficiency during that stretch.

Philadelphia at Houston is yet to have a line and total set due to injury news related to Joel Embiid who has been ruled out. We break down all the major injury news impacting the slate below.

Toronto have the pace up matchup of the slate against the New Orleans Pelicans who have played at the 5th fastest pace in the league this season. The Pelicans have also ranked 22nd in defensive efficiency this season making this an elite matchup for the Raptors.

Charlotte have the second highest pace up matchup against Washington and they also have the biggest differential in their implied point total compared to their season average at +8.3 points.

Jrue Holiday has been diagnosed with an abdominal strain and will be reevaluated in 7-10 days. Amazingly this is the first game that Holiday has missed this season, monitor the news for who will replace him in the starting lineup. Elfrid Payton (DS DK $5,000) has been the biggest beneficiary with Holiday off the court this year averaging +4.4 fantasy points per 36 minutes.

Joel Embiid remains out on this slate. Ben Simmons (DS DK $9,100) and Tobias Harris (DS DK $7,400) have benefited the most of the 76ers stars averaging +5.3 and +6.6 fantasy points respectively in games Embiid has missed. 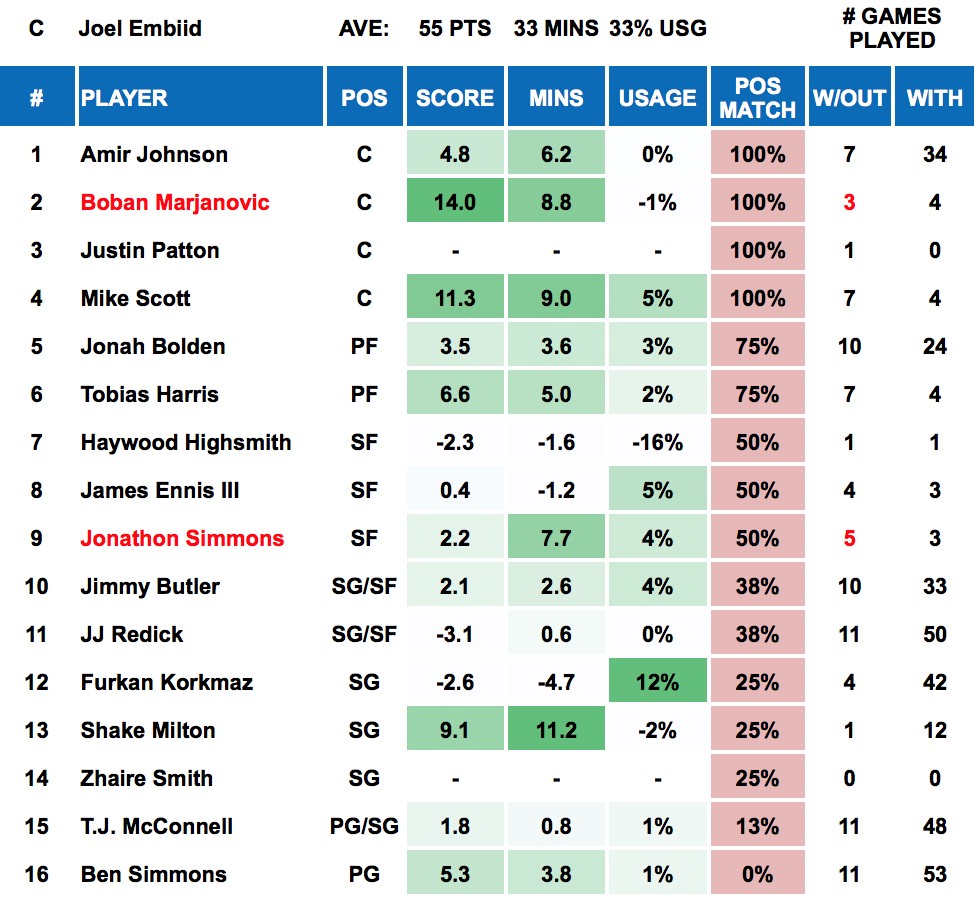 Ricky Rubio is doubtful to play on this slate. Royce O’Neale (DS DK $3,300) has typically taken Rubio’s spot in the starting lineup and averaged a massive +12.6 fantasy points per game in an extra 14 minutes of playing time across the 8 games Rubio has missed this year. 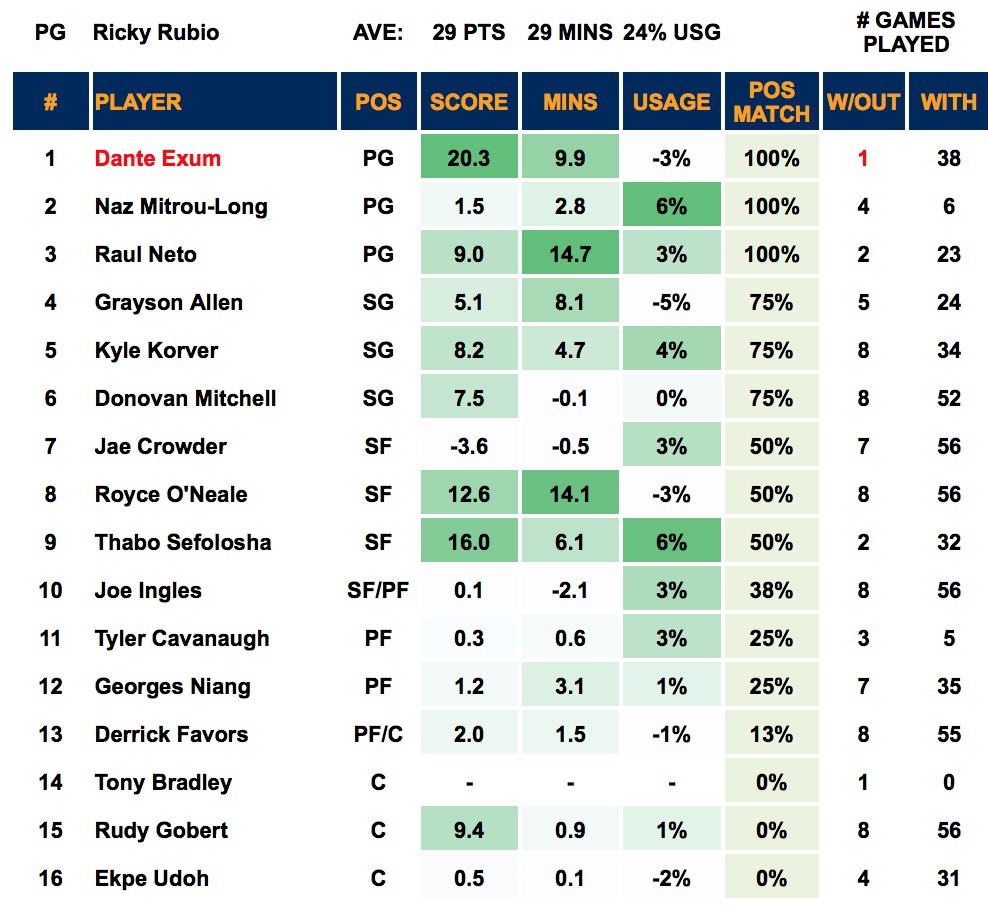 Shai Gilgeous-Alexander (DS $8,350, DK $4,100) … it has been a long time since I have rostered Shai, but he has had a mini resurgence scoring over 20 fantasy points in each of his last 4 games. On this slate he is in the highest game total on the slate and matches up against the Thunder who have given up the third most fantasy points over the last 10 games.

Gary Harris (DS $8,590, DK $4,000) looked like he was all the way back to his old self last game. Finally playing 30 minutes and returning 35.5 fantasy points. At his peak he is a $6K player on DraftKings so he is hugely discounted if you catch him on his return to form.

PJ Tucker (DS $9,500, DK $4,000) is locked into 35-40 minutes a game with Faried out. This makes him a break in case of emergency cash game value play. He also has a rare upside of 40+ fantasy points and the 76ers have had trouble with power forwards all season 7th most points to the position this year.

Lauri Markkanen (DS $14,410, DK $7,700) totally burnt me last slate so this is vomit inducing to go back to the well, however… that is the DFS life. His price has dropped under $8K despite last games flop being predominantly due to early foul trouble. At this price point the his high 60s ceiling would be a GPP winning score.

Clint Capela (DS $14,170, DK $6,700) should have his way with the 76ers with no Embiid in the lineup. He will either be matched up against Jonah Bolden or Amir Johnson and Capella’s minutes have been up in the mid to high 30s for the last 10 games.

Bobby Portis (DS $10,220, DK $5,900) has seen a price decline after a poor performance last game. We all know he brings massive upside and this slate brings one of the top matchups for centres going against Charlotte who have given up the 5th most points to the position over the last 10 games. 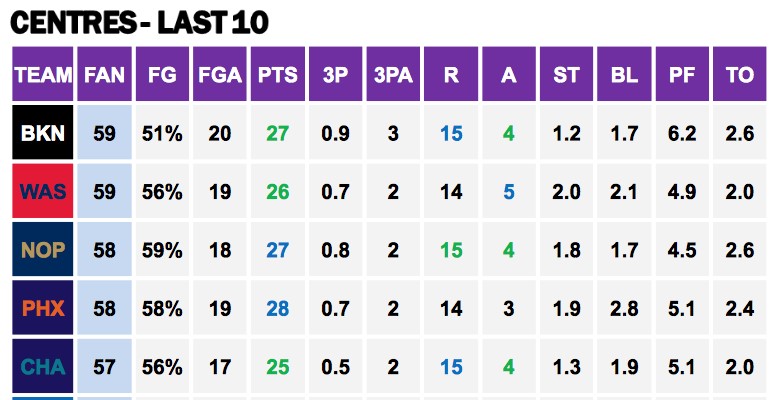 Kemba Walker (DS $15,200, DK $8,100) could possibly go overlooked on this slate with so much star power on offer. However he brings 60+ upside at this price and this slate is a real chance for him to hit his ceiling playing against Washington who have given up the second most fantasy points in the league to point guards this year.