NBA Wednesday (Thursday AEST) brings a monster 12 game slate to play. At this time of year a 12 game slate is similar to the movie The Purge when the sirens start - just take cover and hope for the best. The usual major DFS tournaments are on offer:

Well… not much to gain here. No surprise that the bookmakers’ want not part of this right about now as the majority of lineups sit up in the air. To be honest on this final day it is probably time to throw the predictions out the window.

The biggest avenues to go down are highlighting the games on the final day where teams still have something to play for, as we can get an more accurate idea who rotations and minutes. And... to find the best value based on the lineups we are expecting, which is where things will get a little bit crazy.

In the East Charlotte and Detroit will be fighting on the final day for the 8th spot, while Brooklyn and Orlando are jockeying for positions. While out West the top 8 is set but it will still be a ferocious final day as positions 2 through 8 are all up for grabs (bar Utah locked into the 5th spot). So this means Denver, Houston, Portland, Oklahoma City, San Antonio and the LA Clippers all have something to play for and should be solid to target.

Let’s see how we go here, we have broken down the biggest lineup issues on the slate below but make sure you keep an eye on the entire slate closer to tip off:

The Warriors are likely to be without Stephen Curry, Klay Thompson and Kevin Durant on this slate who are all game time decisions currently. Quinn Cook (DS $6,300, DK $3,800) played 27 minutes in the last game after Curry left in the first quarter and returned 27 points, he will be one of the top plays on the slate if he moves into the starting lineup.

Quinn Cook (DS $6,300, DK $3,800) is at a bargain basement price and should play 30+ minutes on this slate. With Curry out of the lineup this year he has averaged a massive +15 fantasy points from an extra 16 minutes of playing time in 12 games. Furthermore we expect there to be more big outs from this Warriors side, which should leave Cook with a greater usage increase in addition to the minutes. 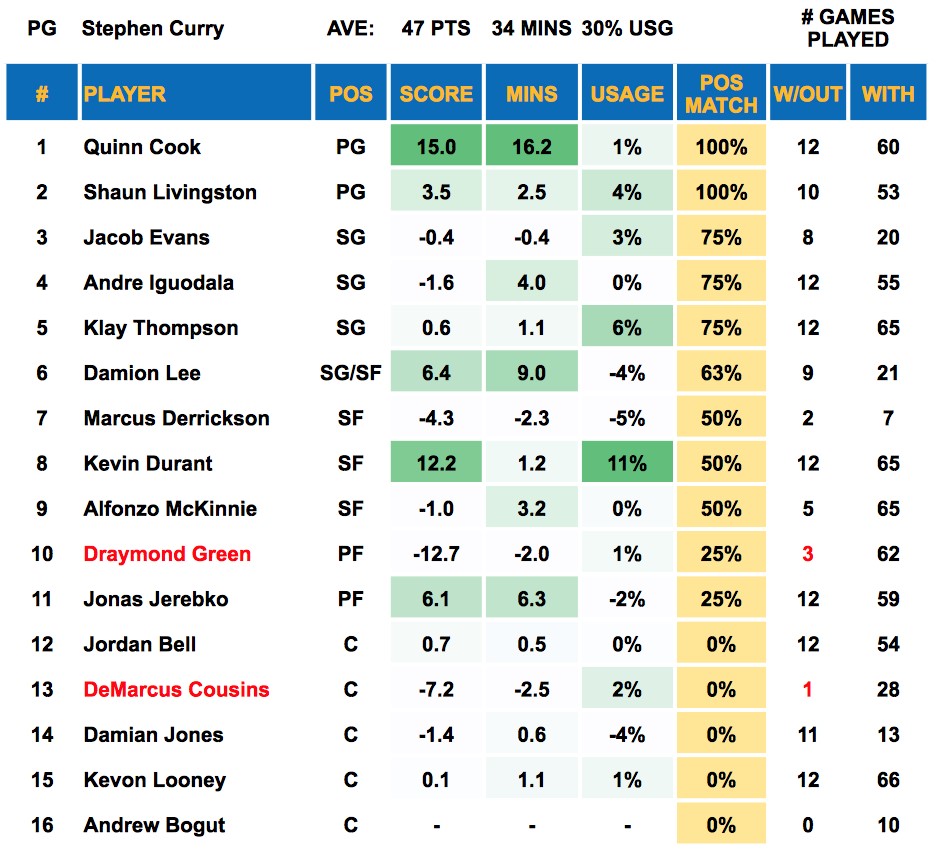 Enes Kanter (DS $12,320, DK $7,400) is… due to unfortunate circumstances of others… absolutely loving life at the moment. Finally in a position where his minutes are guaranteed he is flourishing, averaging 41.2 fantasy points from 30 minutes of playing time over his last 5 games. On this slate he draws an elite matchup against the Kings who play at one of the fastest paces in the league this season and have given up the third most points to centre over the last 10 games.

Demarcus Cousins (DS $12,740, DK $7,200) looks to be the player the Warriors still want to give minutes to as we head into the playoffs. Given he only began playing mid season Cousins is likely still taking advantage of playing time as we head to the playoffs. With the other stars expected to sit in this final game of the season Cousins will have all the usage he can handle. In todays game he played a massive 35 minutes and returned 49.5 fantasy points.

Kevin Knox (DS $8,670, DK $5,700) has found some of that “everyone’s tanking the NBA is easy” late season form. Averaging 32.1 fantasy points from a whopping 34 minutes of playing time over his last 5 games he is one of the safest plays on this slate. Expect his usage to increase even further if the league's most recent candidate for MVP Mario Hezonja is out on this slate as well (he is currently GTD).

Paul George (DS $16,700, DK $10,300) / Russell Westbrook (DS $20,830, DK $11,800) are two obvious plays on this slate as Oklahoma City still have to play to hold onto 6th spot and hopefully avoid Houston in round 1 if other results fall their way. Westbrook never takes a night off regardless, he has been on an all out assault recently averaging 67.2 fantasy points of his last 5 games. Despite his high salary he is easily the safest play on this slate with 60 points looking like the floor at the moment.

Nikola Vucevic (DS $16,070, DK $9,900) also has something to play for as the Magic have a chance to move up to sixth or down to eight with a loss. He should have his way with Bismack Biyombo with the Hornet's struggling at the centre position all season.