NBA Wednesday (Thursday AEST) brings another monster 11 game slate. Let’s embrace the crazy as we try and work through what to expect. The usual major DFS tournaments are on offer:

This mega slate brings three monster game totals to sink our teeth into with three games at 236 points and higher. The Pelicans at Lakers, Wizards at Nets and Timberwolves at Atlanta are all great games to target on this slate and are expected to remain relatively close with no line higher than 5 points.

We then have another three games at with totals of 227 points, and this is without even mentioning the Bucks at Kings game that might be the DFS matchup of the year and is yet to have a total set as we await injury news.

As mentioned on Tuesday the best thing to do on massive slates is to narrow down your options so I will likely put a pen through the two lowest game totals on the sate as well as Golden State at Miami, which is pace down for Golden State and has serious blowout potential with a line of 9 points.

Given the size of the game totals on this slate it no surprise to see a plethora of pace up matchups. Minnesota draw the highest pace up matchup against Atlanta who rank number one in pace this season.

The Lakers have the biggest differential in their implied point total compared to their season average for their matchup with the New Orleans Pelicans who have played at the fifth fastest pace this season and are ranked 22nd in defensive efficiency.

My sneaky matchup, if there is one on this slate, is Washington at Brooklyn. Brooklyn have been playing at warp speed recently (4th in the league the last 15 games), making this more of a pace up matchup than it would initially appear for Washington.

Kris Dunn and Otto Porter remain questionable on this slate. With both players out in their last game Ryan Arcidiacono (DS $5,940, DK $4,000) started and played 30 minutes returning 20.25 fantasy points.

James Johnson is questionable on this slate while Justise Winslow is expected to play. In the last game Kelly Olynyk (DS $10,690, DK $4,900) started in Johnson’s position, playing 41 minutes and returning a massive 49 points.

Jeff Teague is questionable for this slate. Tyus Jones (DS $8,960, DK $4,500) figures to be the biggest beneficiary if Teague is out, he has averaged +10 fantasy points from an extra 9.5 minutes of playing time this season when Teague has missed. 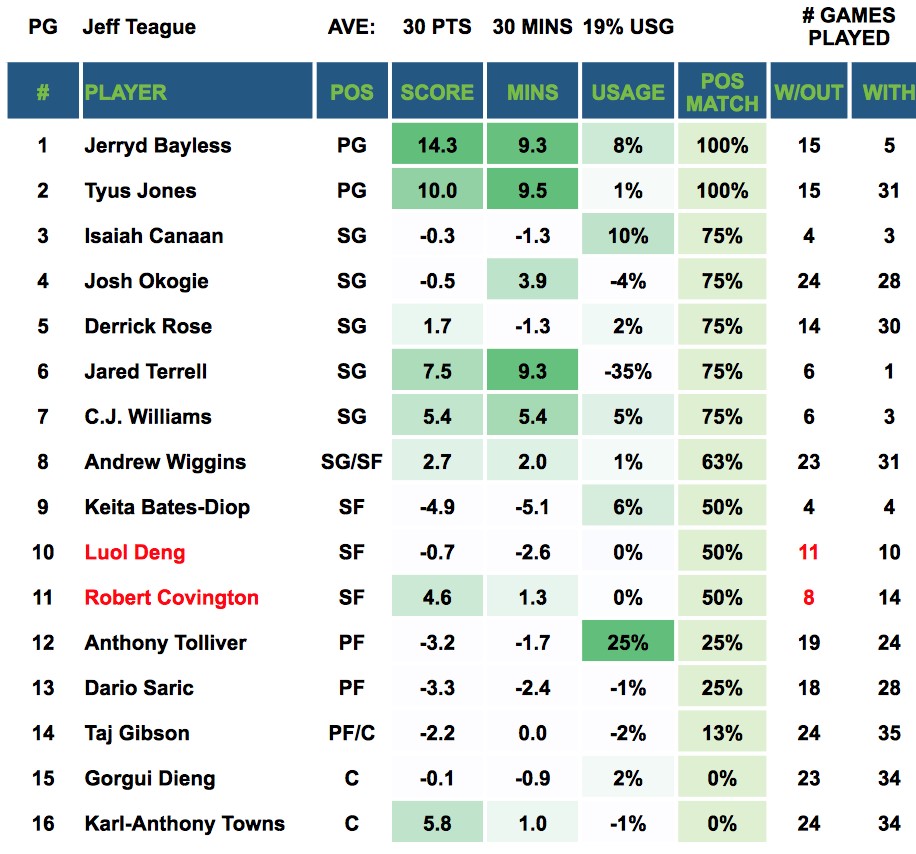 Derrick White (DS $9,880, DK $4,600) has played two games since returning from injury now and got 25 minutes in the most recent contest so we can expect him to be close to his usual allotment now. He is way too underpriced for that role given he was priced at $5.7K on DraftKings before he was injured. In his last game he returned 27.5 fantasy points despite shooting just 3/10 from the floor showing he has a high floor at this price.

Elfrid Payton (DS $10,850, DK $5,200) is still too cheap for the role he is playing on this roster now that Anthony Davis has effectively pulled the pin. He has averaged 33 minutes over the last two games and returned 38 fantasy points in each contest. On this slate there is the added benefit of being matched up against the Lakers who are ranked 26th in defensive efficiency over the last 10 games and conceding the 5th most fantasy points to point guards. 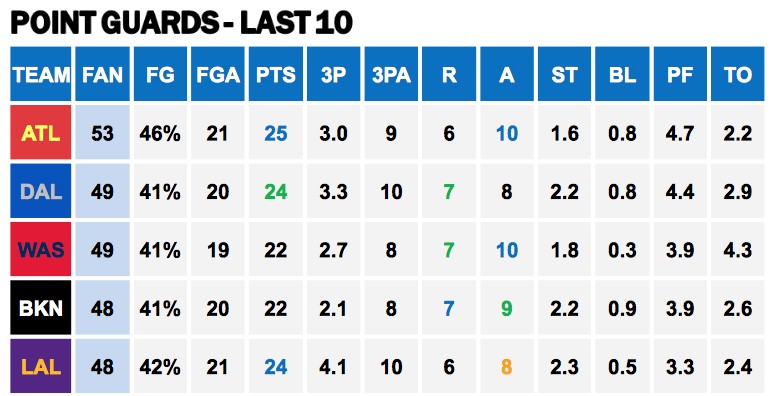 Karl Anthony Towns (DS $18,100, DK $10,600) is fresh off 72 fantasy point performance and now matches up with Atlanta who have given up the most fantasy points in the league this season.  The Hawks are ranked 28th in defensive efficiency this year making this game a perfect opportunity for Towns to hit his ceiling again.

Russell has average 51 fantasy points over the last 5 games and has a dream matchup with Washington giving up the second most fantasy points to point guards this year.

Meanwhile, Beal’s playing time and usage has been through the absolute roof recently. He has played over 40 minutes in each of his last four games and averaging 58.5 fantasy points in these games. On this slate he draws a pace up matchup against Brooklyn who have played at the 4th fastest pace in the league over the last 15 games.

Jrue Holiday (DS $15,770, DK $7,600) is underpriced and brings one of the safest floors on the slate for this price range. He is the perfect cash game play, but also brings 50-60 point upside to make him viable in GPPs. On this slate he matches up against the Lakers who have given up the third most points to shooting guards over the last 10 games.