One game is absolutely popping above the rest on this slate in terms of game totals with the New Orleans Pelicans at LA Clippers set at 239 points over 11 points above the next highest. The line is set at 3 points, which means the game is expected to stay close throughout making it the most attractive target on this slate.

The next highest game on this slate is Portland at Sacramento at 227.5 points. Sacramento have been a DFS dream match all season and this game should get less attention than the top billed matchup.

The Clippers have biggest implied point differential to their season average at +5.4 points. This is due to matching up against the Pelicans who are the 5th fastest team in the league this season while ranked 25th in the league in defensive efficiency.

Portland have the top pace up matchup on the slate going against the Kings who are second in the league in pace this year. The Kings have been marginally better defensively than the Pelicans ranked at 20th in the league this season.

Kyrie Irving is a game time decision for the game against Brooklyn. In the five games Irving has missed this season it has been Gordon Hayward (DS $9,920, DK $5,300) who has been the biggest beneficiary averaging +12.9 fantasy points from an extra 4 minutes and a 4% increase in usage. Terry Rozier (DS $8,120, DK $3,700) will draw the start and while he sees a usage decline with Irving out, he has still seen an increase in fantasy points of +10.1 per game due to playing 8 extra minutes. 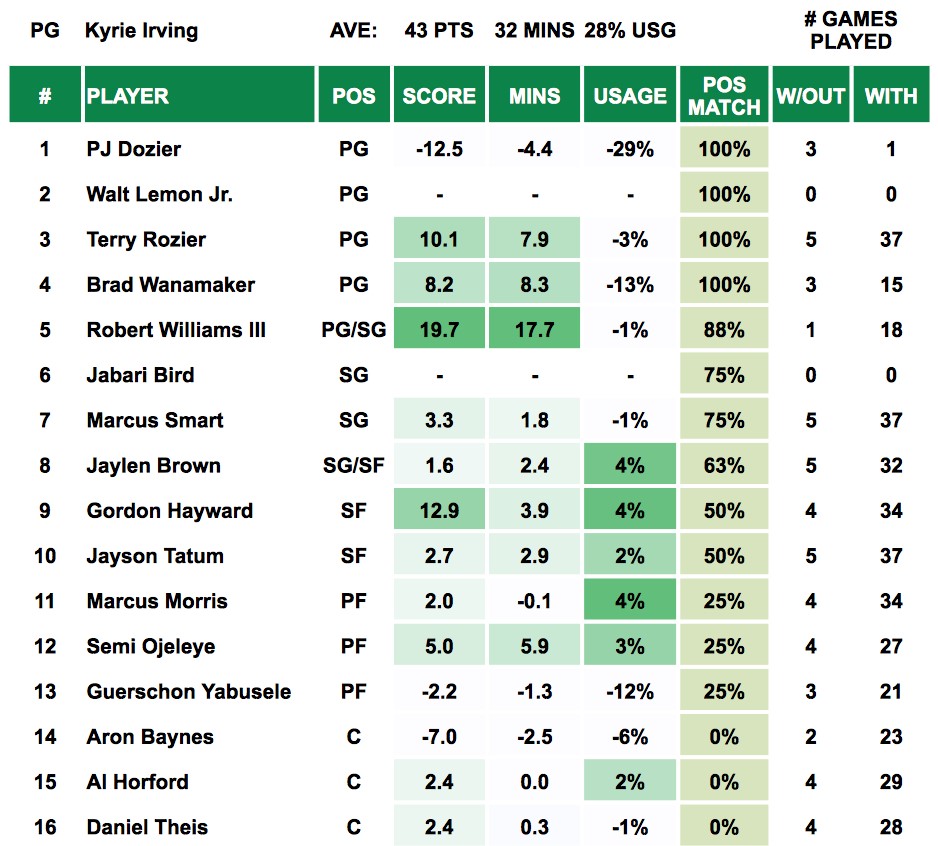 Kyle Anderson is out for 2-4 weeks. Anderson was injured in Memphis last game playing just 8 minutes. In this contest JaMychal Green (DS $9,540, DK $4,800) popped for 24 points and 11 rebounds in 22 minutes of playing time. Monitor news for who will take Anderson's starting position and consider newly acquired Justin Holiday (DS $8,670, DK $3,400).

Value will open up as the slate gets closer. It is worth highlighting that if Kyrie Irving is out Terry Rozier (DS $8,120, DK $3,700) will be an absolute lock and load on this slate at his price point.

Bogdan Bogdanovic (DS $10,420, DK $5,600) has averaged a shade under 30 fantasy points over his past six games and offers a ceiling of 40+ points coming off the bench. He is priced far too cheap on DraftKings in a matchup offering the second highest game total on the slate. 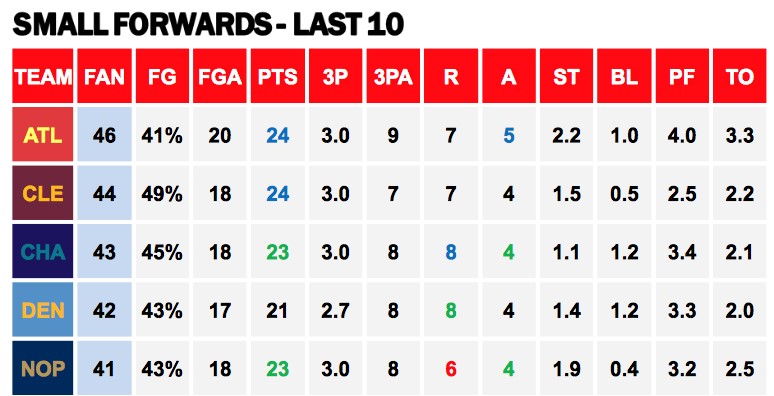 Harris on the other hand is more likely to hit a ceiling of high 40’s and should have no issues with Julius Randle defense. Both are in elite matchups on this slate.

Al Horford (DS $10,260, DK $6,200) / Marcus Morris (DS $11,080, DK $5,800) matchup against Brooklyn who have had a torrid time defending bigs all year conceding the most fantasy points in the league to centres. Horford has the best micro matchup in the league for his position and has seen his minutes restriction lifted. He should also be more involved in the play making if Irving was to miss this game.

Morris has put up over 30 fantasy points in each of his last 3 games and is simply priced to cheap on DraftKings.

All that suggests Davis is a no brainer, but this is testament to how unbelievable Harden has been. With a usage rate of over 50% since Paul and Gordon have been out Harden has gone under 70 fantasy points just twice in his last 8 games… Yes you read that correctly. Today Harden had a bad shooting night going 1/17 from 3 point range and still scored 75 fantasy points.

While this is a negative matchup for Harden he has shown over and over that doesn’t matter given their current active roster, in fact Harden played Memphis 7 games ago and had 82 fantasy points. People will want to squeeze in both Davis and Harden on this slate, particularly if Kyrie is out opening up Terry Rozier value.

Damian Lillard (DS $15,570, DK $8,800) is in the pace up matchup of the slate against the Sacramento Kings who have given up the fifth most points in the league to point guards this season. It has been a while since Lillard has busted out for a score near his 60 point ceiling but one is likely to be coming and this is the matchup that could allow it.

Kemba Walker (DS $14,980, DK $7,900) is another lead point guard who has slowed down as the season has gone on after a blistering start. He has been priced down on this slate due to a combination of form and likely matchup. However, the Spurs haven’t been as stingy as their pace would suggest giving up the 7th most points to point guards over the last 10 games. Kemba should be low owned on this slate and if he can explode for one of his ceiling games would give you an advantage of the field. 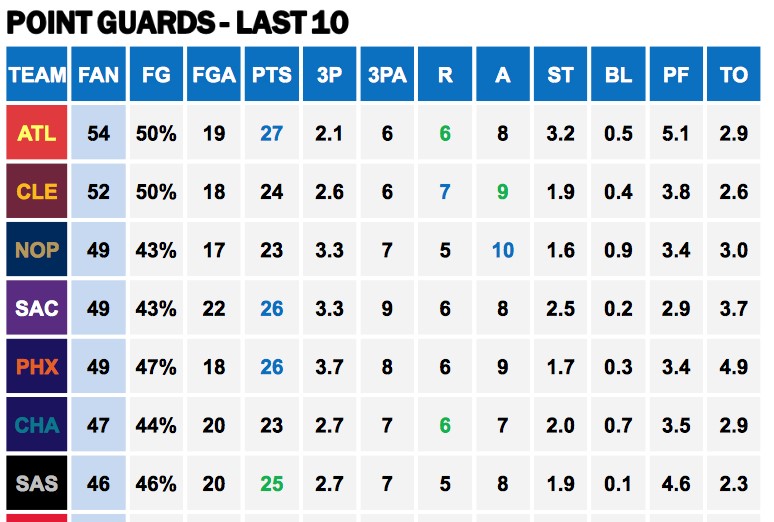