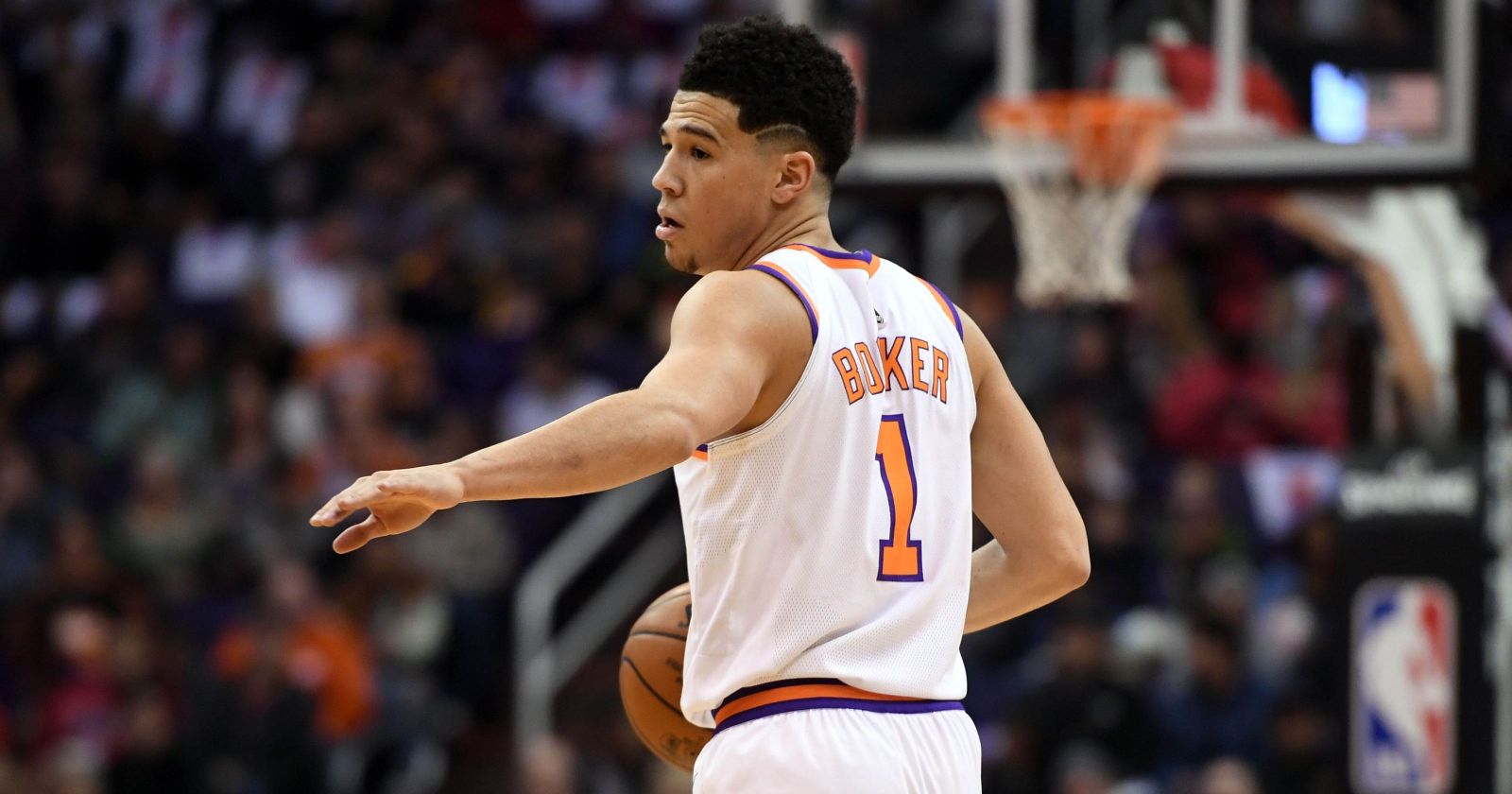 NBA Monday (Tuesday AEST) brings us a perfect 8 game slate this week. The usual major DFS tournaments are on offer:

There is one stand out matchup from a game total perspective on this slate in the Sacramento Kings vs Minnesota Timberwolves at 231.5 points. This is over 12 points above the next highest currently listed and should be one of the most popular game targets on the slate.

My personal favourite match up to target will be Phoenix vs New York who bring the third highest listed game total and a line of 1.5 points. What makes this matchup even more appealing however is the defensive efficiency of the teams involved, with the Knicks ranked 29th in the league and Phoenix ranked 26th.

There are two games yet to be have a total and line listed while we await injury news, this is covered further below.

Minnestor have the biggest pace up matchup on the slate vs Sacramento who are playing at the second fastest pace in the league this season. This has led to a massive +9.3 points in their implied total compared to their season averaged.

Chicago have the second highest pace up matchup but are not a team I will be focusing on given they play the Oklahoma City Thunder who have the number one defensive efficiency rating in the league this season resulting in Chicago’s implied points total being 1.2 points under their season average.

Both Detroit and San Antonio are worth monitoring for when their games lines and totals go up as they are in pace up matchups. 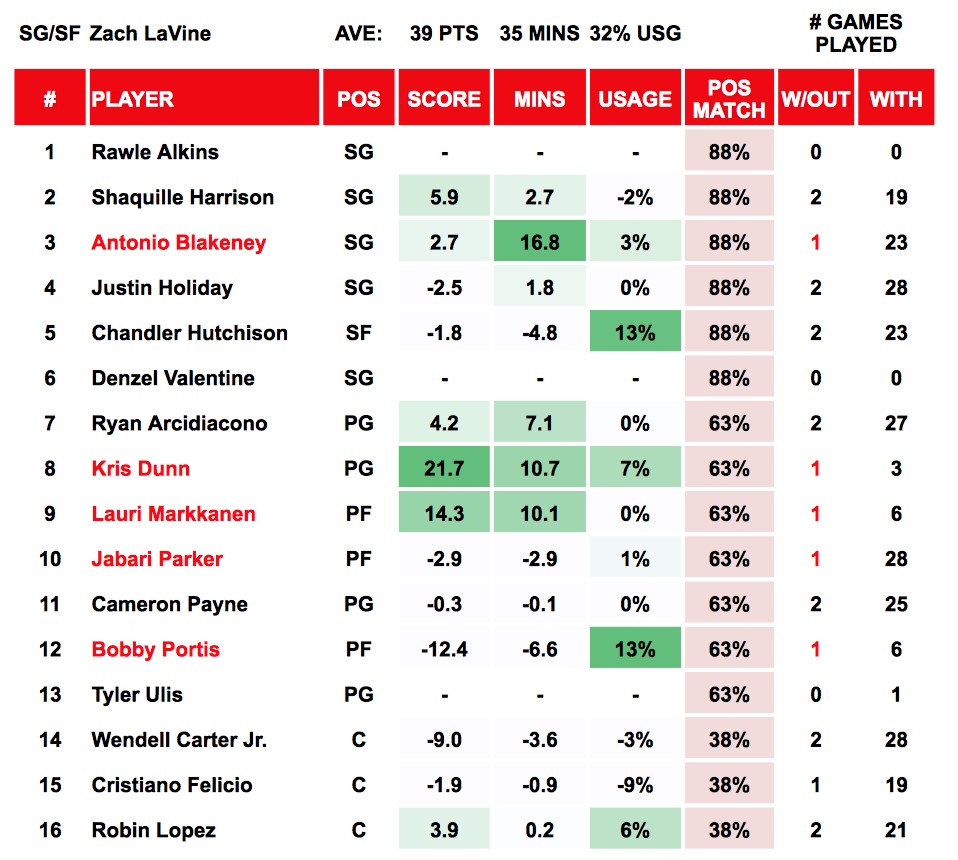 Khris Middleton and Malcolm Brogdon are listed at game time decisions for the matchup with Detroit. They both missed last game and Pat Connaughton (DS $6,160, DK $3,500) was the value play of the day on that slate playing 30 minutes and 28.75 fantasy points.

Ryan Arcidiacono (DS $6,960, DK $4,200)... my main man is back in the mix for rostering with LaVine out on this slate. In 2 games without LaVine he has seen an extra 7 minutes of game time and averaged +4 fantasy points this season. Arcidiacono has over 40 point upside making him a great value play on this slate.

Luke Kennard (DS $6,940, DK $3,500) is incredibly high and miss and as a result his price hasn’t really moved since he returned from injury. But from a GPP perspective he has already flashed a 42 fantasy point upside just 3 games ago and on this slate he will face the Bucks who play at the 5th fastest pace in the league and have conceded the second most made threes.

Nemanja Bjelica (DS $9,200, DK $4,400) is back playing a significant minutes load with Marvin Baguely out injured and he is right back in his early season form topping 40 fantasy points in 2 of his last 3 games (and the other game he 27 in just 22 minutes due to foul trouble).

Jerami Grant (DS $8,420, DK $4,500) has been one of the steadiest cash game value plays of the season. On this slate he is matched up against the Chicago Bulls who are 21st in the league in defensive efficiency and have given up the 7th most fantasy points to power forwards this year.

Enes Kanter (DS $12,220, DK $6,700) vs DeAndre Ayton (DS $12,480, DK $7,000) is drool worthy matchup for DFS players sporting two of the worst defensive centres in the league against each other. Both New york and Phoenix have been in the league leaders for fantasy points conceded to the centre position this year. Rostering both could be an interesting choice as you hope for a shoot out and both avoid getting into foul trouble. 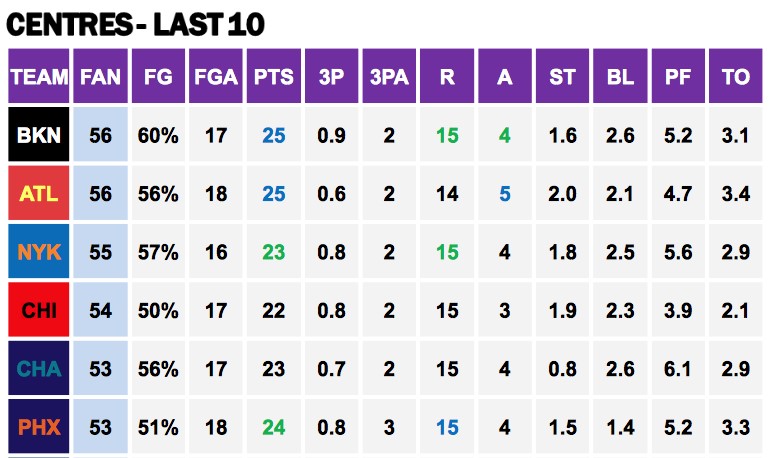 Mike Conley (DS $13,560, DK $7,900) is price perfectly for a player with over 50 point fantasy upside. On this slate he gets a nice pace up matchup (one that is better than the season long stats suggest given Golden State play much faster with Curry and Green in the lineup). He also draws a fantasy friendly individual defensive matchup vs Curry who has a negative defensive RPM.

Donovan Mitchell (DS $11,580, DK $6,800) continues to be far too cheap for a player playing 32 minutes per game with a usage rate of 29%. He has 50+ fantasy point upside and despite having a couple of outlier bad game this seasons should be safe for a floor close to 30 points. The Rockets play at a slow pace but if there is one position to target them it is at shooting guard where James Harden will be matched up against Mitchell on the defensive end.

Steven Adams (DS $12,590, DK $6,900) is having the best season of career averaging 16 points and just under 10 rebounds per game. He has seen a jump in offensive opportunities and on this slate has one of the best matchups in the league vs Chicago who have given up the third most points in the league to the position this season. He is the ideal cash game performer.

Damian Lillard (DS $16,170, DK $8,800) has a seen a price reduction over over $1,000 on DraftKings over the past week putting himself in a nice value position on this slate. He also has a great matchup vs the LA Clippers who have regressed significantly defensively since the start of the season giving up the fifth most points to point guards over the last 10 games. 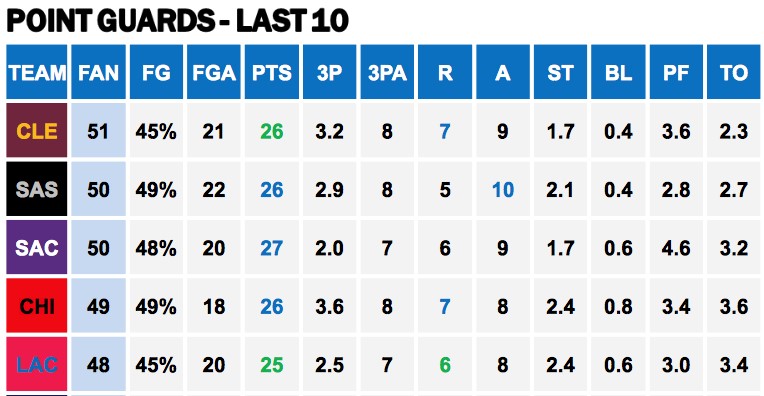 Devin Booker (DS $14,330, DK $8,500) is in one of my favourite matchups of the day against the New York Knicks. He has well over 50 fantasy point upside and will get all the usage and minutes he can handle on this Phoenix Suns squad.

Russell Westbrook (DS $20,300, DK $11,200) has one of the top matchups on this slate and I will continue to roster him waiting for his poor shooting to regress. Over the past four games he has shot 4/17, 5/15, 8/16 and 4/18 while still averaging 50 fantasy points. As soon as he starts making shots that point total will balloon and on this slate he has one of the better matchups in the league vs Chicago.