There are four games on this slate with game totals at 222.5 or higher and these look to be the main games to target with the three lowest totals on the slate at 214.5 or under. Each of the four top totals have lines no higher than four points meaning they should all remain close throughout.

There are two games yet to have a total set as we await injury news with the most attractive from a daily fantasy perspective being New Orleans at Dallas. This game should have one of the higher totals on the slate and is my pick of a match up to target which we will touch on further below.

Dallas are in the pace up matchup of the slate by a wide margin. The Pelicans have played at the fourth fastest pace in the league this season, and they have really cranked this up recently playing at the fastest pace over the past 10 games. In addition they are ranked 23rd in defensive efficiency putting Dallas in an elite spot on this slate.

Luka Doncic did not play in the Mavericks last game and is a game time decision on this slate. Doncic has had a massive workload in his rookie year averaging 32 minutes and a 30% usage rate. As you can see from our player out tool when he has been out this production has been soaked up by a number of different players. I expect Jalen Brunson (DS $12,860, DK $6,100) to be the biggest beneficiary on this slate, he has averaged +5 fantasy points per game in the 5 games Doncic has missed this year. 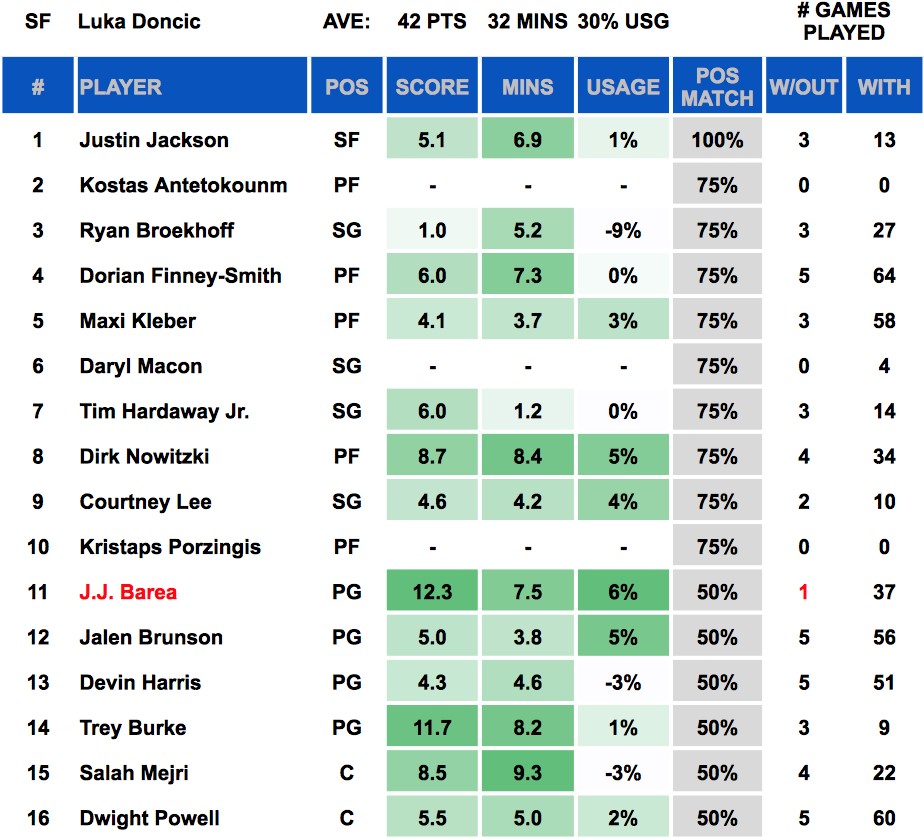 Dennis Smith Jr is not expected to play on this slate. Emmanuel Mudiay (DS $9,360, DK $4,800) will take the starting point guard position and should almost be a lock and load play. Mudiay started in todays game and played 33 minutes returning 44 fantasy points. 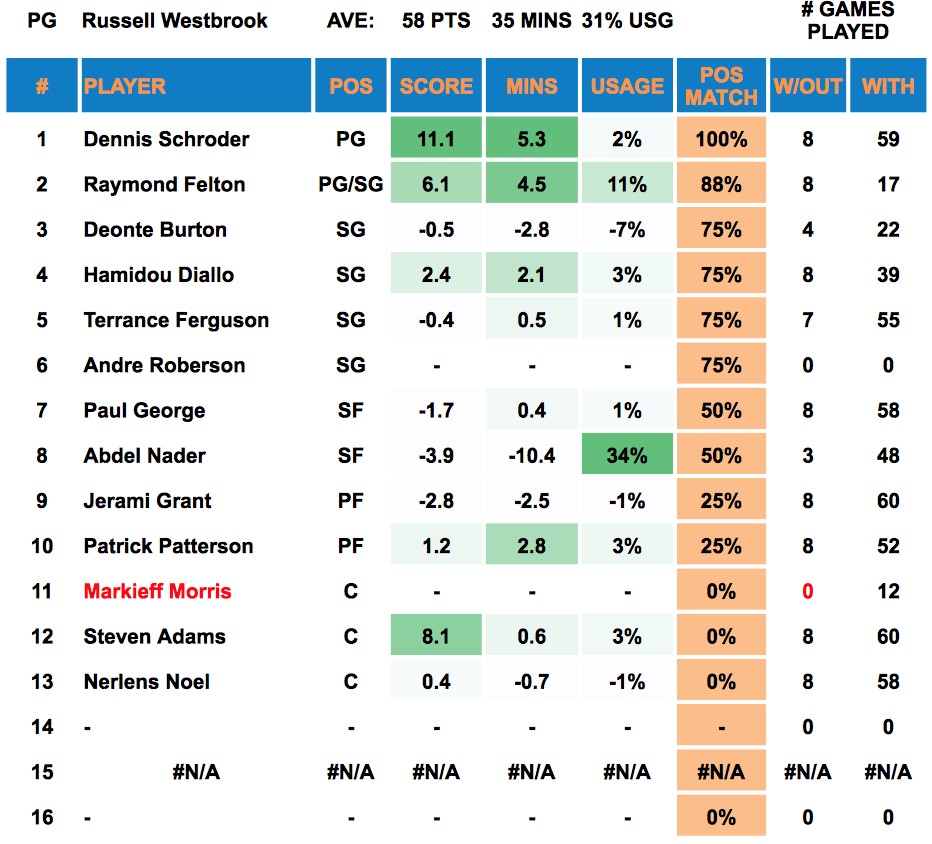 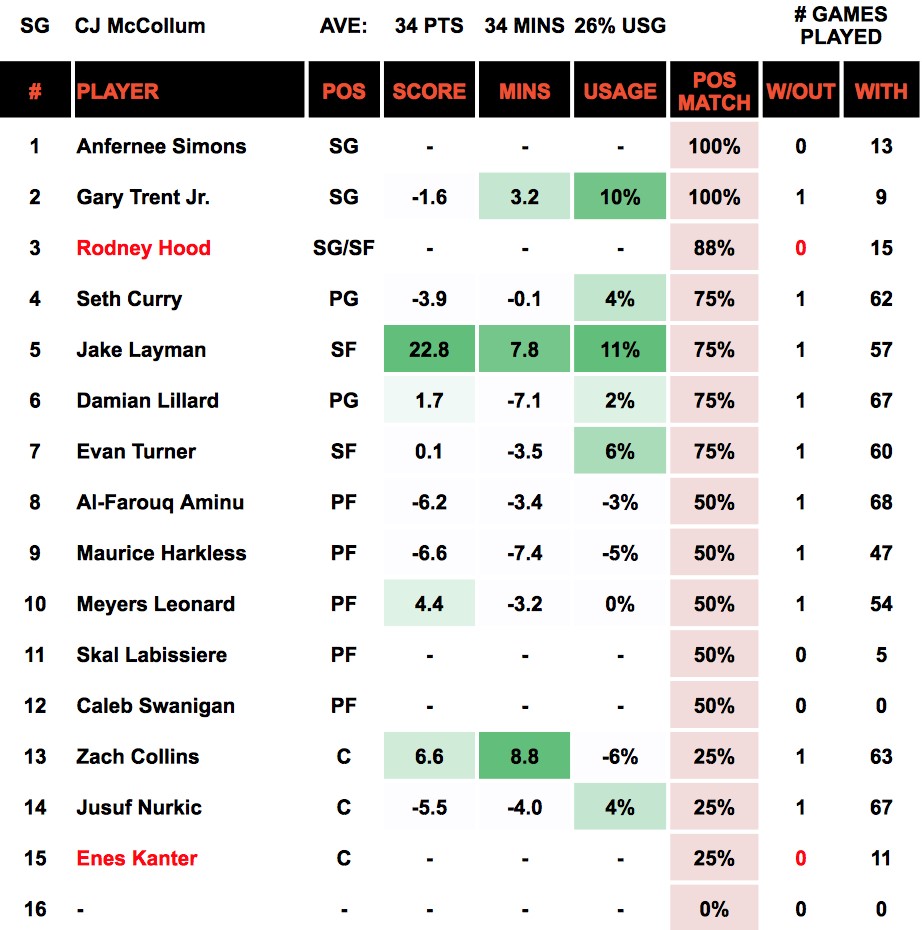 Trevor Ariza (DS $10,820, DK $4,900) is quite simply priced too cheap as a result of his recent injury. Ariza has averaged over 34 minutes this season and averaged 29.1 fantasy points, which just on average would be a safe return at this price point. On this slate he matches up against Dallas who have given up the fourth most points to small forwards over the past 10 games.

Emmanuel Mudiay (DS $9,360, DK $4,800) is lock and load play for me on this slate if Dennis Smith Jr. misses. Mudiay averages a tick under 1 fantasy point per game making him a great value play if he is locked into 30 minutes.

Goran Dragic (DS $8,510, DK $4,600) should also be locked into a 25-30 minutes with Winslow out injured. A player of his calibre is far too cheap with that amount of playing time. Dragic has averaged just under 1 fantasy point per minute this season.

Blake Griffin (DS $16,300, DK $7,200) is just far too cheap after recent run of poor form. Griffin brings GPP winning upside at this price point and on this slate he is matched up against Cleveland who have been getting torched by power forwards, giving up the most points in the league to the position over the last 10 games.

Steven Adams (DS $11,970, DK $5,500) will be my go to Thunder play on this slate with Westbrook out. As mentioned above Adams has been one of the biggest beneficiaries this season when Russell has missed games averaging +8.1 fantasy points and getting 3% usage increase. He has also been priced down as a result of a slump in form making his possible value return higher.

Rudy Gobert (DS $15,560, DK $8,300) has one of the top matchups on this slate for his position against Washington who have given up the third most points to centres over the last 10 games. He is also in the top game total on this slate. 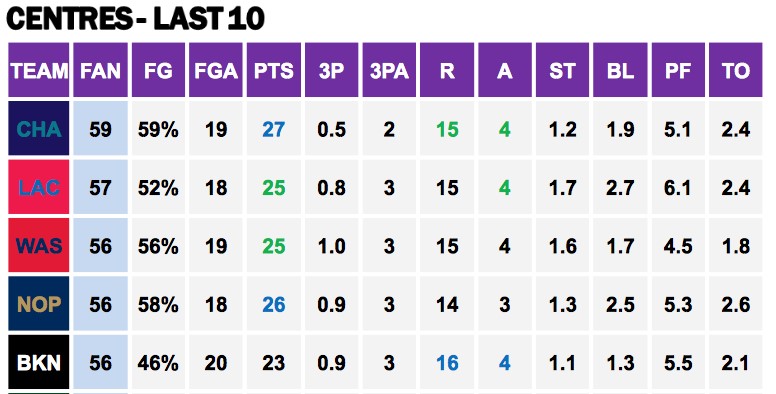 Kyrie Irving (DS $20,040, DK $9,100) is a nice GPP pivot off Damian Lillard who I expect to be popular with McCollum out. Irving has been absolutely blazing lately with two straight games over 65 fantasy points and averaging 57.6 fantasy points over the last four games. There is also a revenge narrative to consider with Irving going up against Jamal Murray for the first time since Murray scored 48 points on Kyrie and was criticised by Irving for his last second attempt at getting 50 points.