Two games headline this slate with game totals of 230 points. The first is Atlanta at Minnesota with the Hawks playing at the fastest pace in the league this season and Minnesota 11th. However, as is typical with Hawks games, particularly on the road, the line is set at 9.5 which means the blowout potential is significant.

The other game is a rematch from last slate of Dallas vs New Orleans. This game has a much more friendly spread of 5 points and the two teams played on Thursday AEST with the Mavericks winning 122-119.

The bottom three game totals on this slate look like you can put a pen straight through them which makes narrowing the player pool down quite easy.

There are two games with game totals and lines yet to be set as a result of pending injury news which we break down below, but the main game that stands out of these two is the Lakers vs Clippers that should have one of the highest totals on this slate.

The Timberwolves have the pace up matchup of the slate playing against the fastest team in the league and also the top implied point differential to their season average at a massive 8.7 points. An interesting target will be the Chicago Bulls matching up against the Wizards who are playing at the 7th fastest pace in the league this season and are ranked 27th in defensive efficiency.

Jeff Teague is out again on this slate. Derrick Rose (DS $11,250, DK $7,100) has started in Teague’s absence and has averaged +5.6 fantasy points from a 4% usage increase in games that Teague has missed this season. 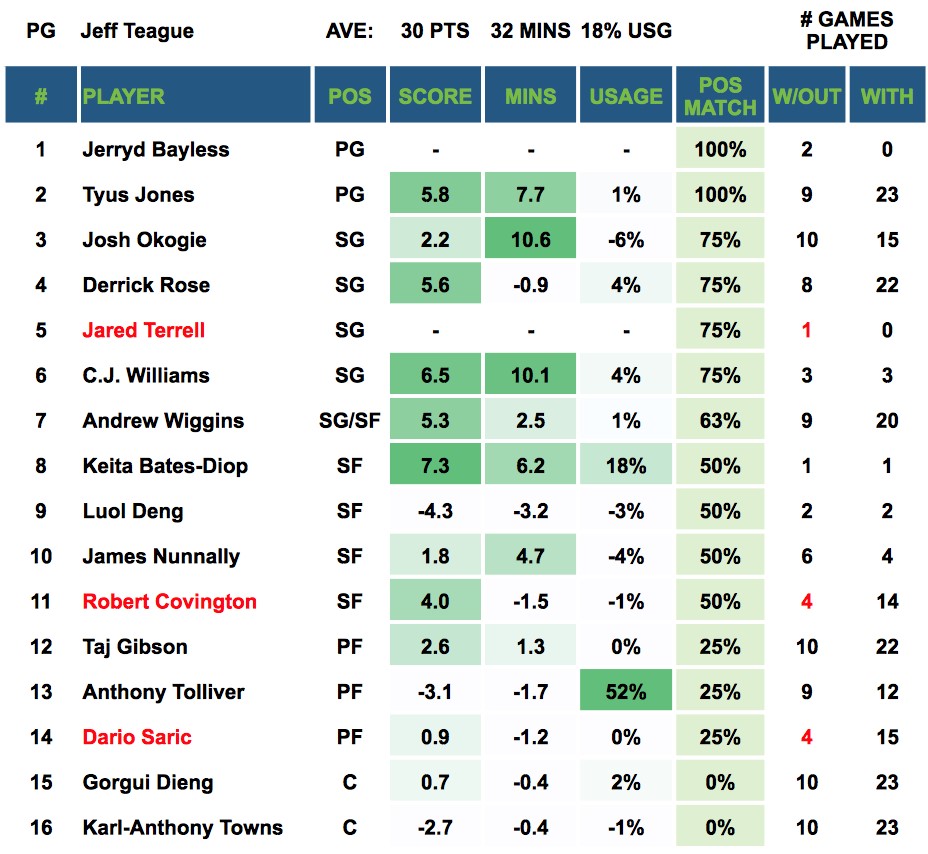 Paul George is a game time decision for the matchup against Phoenix. He has yet to miss a game this season so it would make sense to sit this match out. With George off the court this season Dennis Schroder (DS $10,470,  DK $5,300) has seen the biggest usage increase of 9%, but I would also be expecting Russell Westbrook (DS $20,950, DK $10,900) to get a significant bump.

Kyle Lowry has been ruled out again for the matchup with the Orlando Magic. In the games Lowry has missed this year it has been Fred VanVleet (DS $10,070, DK $5,600) who has moved into the starting lineup and been the biggest beneficiary averaging +11 fantasy points from 11 more minutes per game. 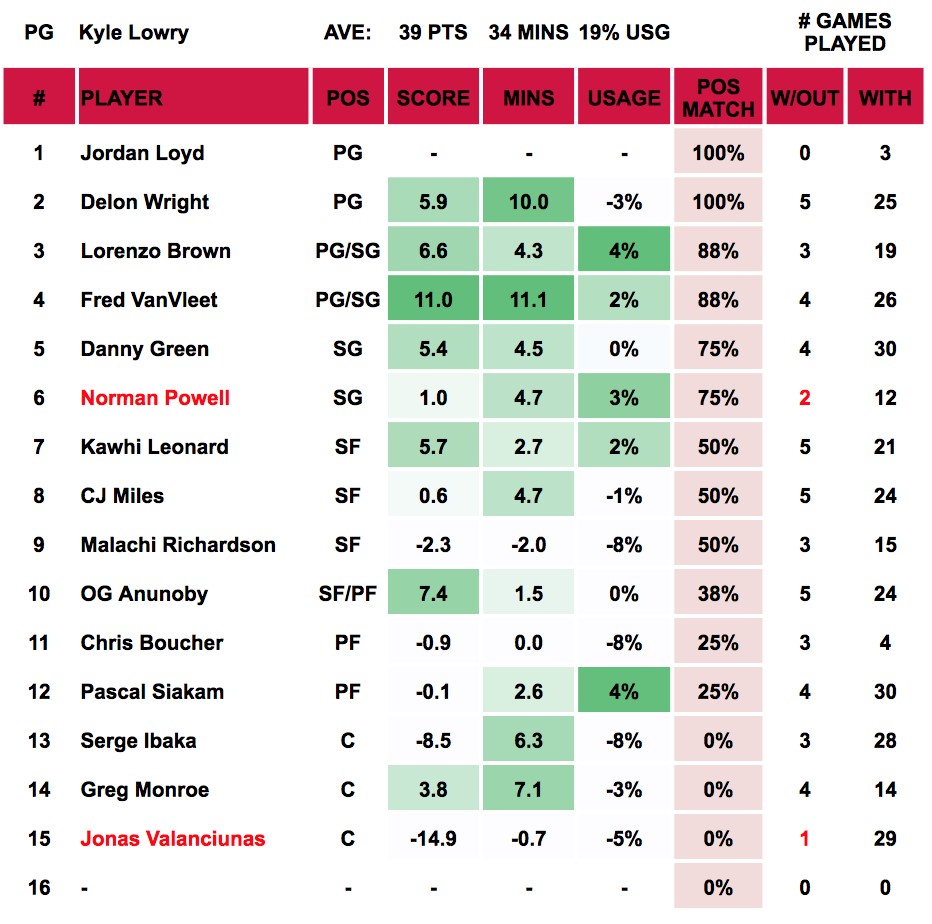 Wendell Carter Jr. (DS $8,760, DK $4,800) is vomit inducing to roster and this should be purely a GPP play on this slate that said if he can stay out of a foul trouble (a big if) he has shown 40+ point upside this season. On this slate he has a matchup with Thomas Bryant who has been conceding the 7th most fantasy points to opposition centres this year.

Jerami Grant (DS $10,400, DK $4,800) I tend to mention every slate where there is not obvious value standing out. He is a cash game plug and play every day but still brings that GPP upside like on the Christmas Day slate where he popped for 36 fantasy points against the Rockets. On this slate he Phoenix Suns who are 27th in defensive efficiency this season and in the event Paul George is out Grant has seen a 4.7% usage bump with him off the floor this year.

Josh Hart (DS $6,590, DK $4,200) is back in the starting lineup with the injury to Lebron James and took advantage today notching up 27 fantasy points. He should see in excess of 30 minutes again on this slate and is matched up against the LA Clippers who play at the 9th fastest pace in the league this season.

Kyle Kuzma (DS $11,030, DK $7,700) is the biggest beneficiary of the Lebron James injury as noted above. In today’s match up he saw 40 minutes of game time and hoisted up 24 shots. Things might be even easier for him on this slate against the Clippers who have conceded the third most fantasy points to power forwards over the past 10 games.

Derrick Rose (DS $11,150, DK $7,100) has gone for over 43 fantasy points in 2 of his last three games. He now comes up against arguably the top matchup in the league for point guards in the Atlanta Hawks. The Hawks play at the fastest pace in the league this season and have given up the second most fantasy point to point guards. With Teague out if this game isn't a total blow out you can expect over 30 minutes from Rose and he has averaged 1.06 fantasy points per minute.

DeAndre Jordan (DS $15,130, DK $6,800) played New Orleans two days ago and returned 40 fantasy points. The Pelicans have been one of the best teams to attack for DFS all year and at this current price Jordan is in a great position to return value.

Zach LaVine (DS $13,580, DK $6,500) is under priced due to returning from injury and having a minutes limit. Monitor news regarding his work load on this slate but if it is all clear, and in particularly, if he returns to the starting lineup he is far too cheap. To make things better he is matched up against Washington who have been one of the fastest teams in the league with the weaker defensive teams this year. Over the last 10 games they have given up the 6th most points to shooting guards. 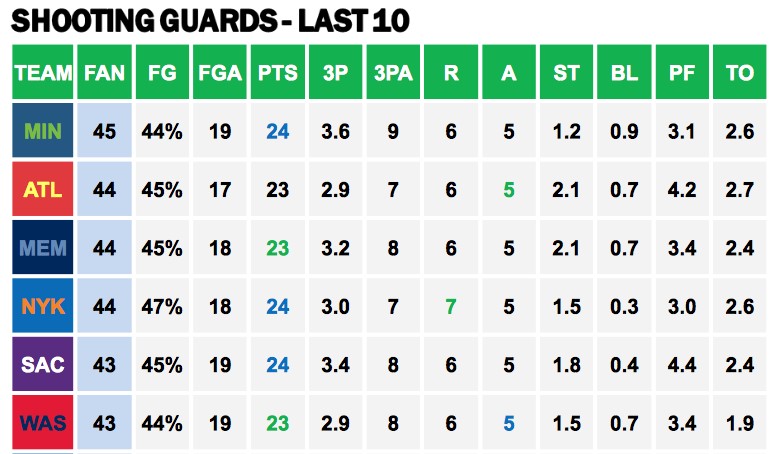 Lonzo Ball (DS $11,220, DK $5,900) took over the majority of the ball handling duties with Lebron and Rondo out today and he filled up to stat sheet returning 57 fantasy points. His price only increased around $400 on DraftKings making him far too cheap still. On this slate there is no reason why he can’t produce a similar level of output against the LA Clippers who have given up the second most fantasy points to point guards over the last 10 games.

Russell Westbrook (DS $20,950, DK $10,900) is my sole premium priced tip on what looks to be a more balanced approach slate. If Paul George is out Westbrook will be a lock and load play and even if George plays he is still in a smash spot against Phoenix. Westbrook is still waiting to break out of his shooting slump and the Suns are the team to do it against ranked 27th in the league in defensive efficiency this season.