There is a huge range in game totals on this slate with over 40 points differentiating the lowest total from the highest. This is beneficial for narrowing down your player pool as you can quite simply put a pen through the Cleveland at Memphis matchup, which is sporting a miserable 196.5 point total.

The marquee matchup on the slate is the Sacramento Kings at Los Angeles Clippers with a massive 238.5 game total. This matchup pits the second and ninth fastest teams in the league against each other, in addition to the 29th and 22nd ranked defences.

There are two games on this slate without a game total or line set as yet due to injury news which we cover below.

Indiana are in the biggest pace up matchup on this slate while also having the biggest differential in implied points to their season average at 6.7 points. This is in a matchup vs Atlanta who play at the fastest pace in the league this season. While Indiana make for an obvious target, as is common with Atlanta games the line is set at 8 points indicating a blow out risk.

The Los Angeles Clippers have the second biggest pace up match and implied points differential which is no surprise based on what we highlighted above. This matchup should be the most popular target on the entire slate.

Dallas and Detroit are also in strong pace up matchups that might make for under owned targets, which can be particularly useful in GPPs.

Zach LaVine is listed as questionable for the match vs the Timberwolves. LaVine has missed the last five games. He has averaged 35 minutes and 32% usage this season when playing so his return will significantly impact players who have been playing well recently including Kris Dunn (DS $11,580, DK $7,400) and Lauri Markkanen (DS $12,820, DK $7,700).

Jeff Teague remains out and Derrick Rose is listed as questionable for the match against Chicago. If Rose is also out Tyus Jones (DS $5,780, DK $4,700) will be the biggest beneficiary in minutes as he moves to the starting lineup. Andrew Wiggins (DS $10,680, DK $6,200) has seen the biggest increase in fantasy points when Derrick Rose has been out this year however: 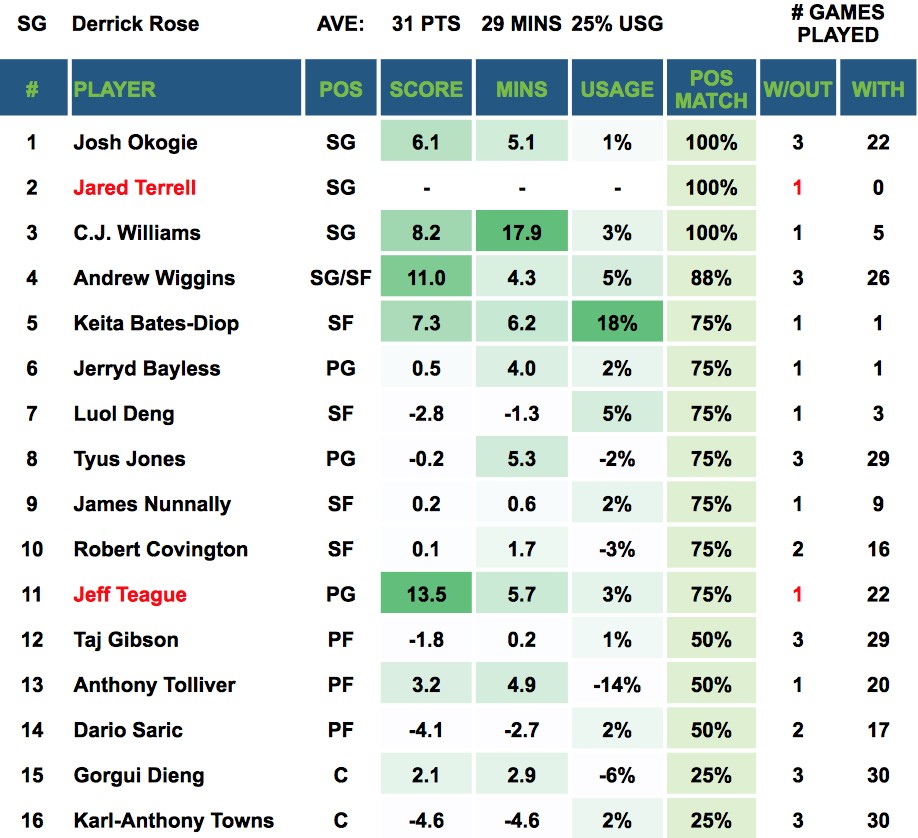 Serge Ibaka, Kawhi Leonard and Kyle Lowry are all expected to play on this slate.

Shai Gilgeous-Alexander (DS $7,510, DK $4,500) crucified my lineups last time the Clippers were on the slate, however he is still getting around that 30 minute mark and he is still regularly going over the 30 point mark, just don’t use him in cash. On this slate his ceiling is in play matching up against the Sacramento Kings who have given up the 4th most fantasy points to the point guard position this year.

Patrick Beverley (DS $7,980, DK $4,000) is the beneficiary of this same matchup on a slate with little value open as yet. I wouldn’t necessarily play him with Alexander, however one or the other both make for solid value options, particularly in GPPs.

Willie Cauley-Stein (DS $11,970, DK $6,500) is fresh off his best game of the season posting 55 fantasy points. On this slate he has one of the best matchups of the season with the highest game total on the slate and playing against the Los Angeles Clippers who have given up the fifth most fantasy points to centres over the last 10 games. 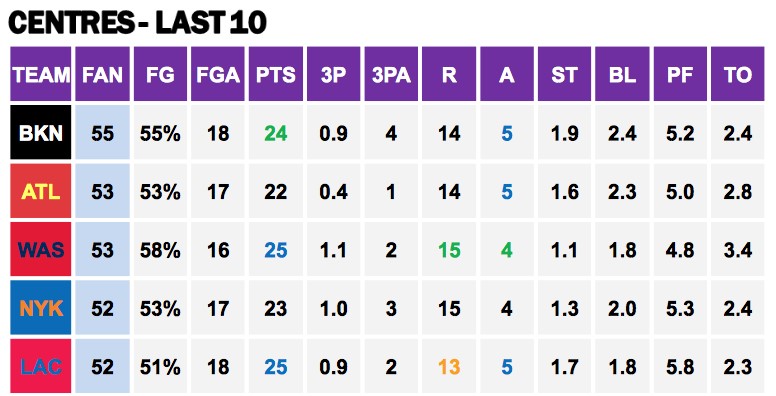 Trae Young (DS $11,280, DK $5,900) continues to see his price drop and as such continues to be a great GPP play. As a I mention every slate Young brings a massive ceiling which makes him a great tournament play whenever his price drops to a certain point and this is the first time he has been under $6K on DraftKings since the first week of the season.

Jaren Jackson Jr (DS $9,830, DK $5,800) hasn't seen a price increase despite topping 30 fantasy points in his last three games. On this slate he matches up against the Cleveland Cavaliers who despite playing at a slow pace are ranked dead last in defensive efficiency and have given up the second most fantasy points to power forwards over the past five games.

Montrezl Harrell (DS $10,680, DK $5,700) is another player on this slate whose price is at the low end for the season. He looked to be out of his form slump with four straight scores over 30 fantasy points and his minutes back to the 25+ range before last games 18.75 stinker as a result of foul trouble.

Nikola Vucevic (DS $ 16,170, DK $8,900) is in an absolute smash spot on this slate against Phoenix who have given up the second most fantasy points to centres this season. Just this week rookie centre DeAndre Ayton allowed waiver wire pickup Thomas Bryant to nearly break a Wilt Chamberlain record for most field goals made without a miss in a single game.

Luka Doncic (DS $15,770, DK $8,300) found a new ceiling recently with Dennis Smith Jr out smashing through 50 fantasy points in two of his last four games. On this slate he has one of the top matchups in the league against the New Orleans Pelicans who are third in the league in pace this season and have given up the third most points to small forwards.