Sunday once again delivers that perfectly sized three game AFL slate for us to play. The usual major contests are on offer on the major platforms:

This slate is a delight with the Gold Coast, Fremantle, Western Bulldogs and St Kilda all top 5 for fantasy points conceded in 2018. Through two rounds this season those trends are yet to continue, however remember the sample size is extremely small, and all four sides have had a relatively soft schedule to start the season.

One surprise to start the year is that Hawthorn, one of the stingiest teams in the league in 2018, has given up the 3rd most points this year.

Based on last year’s outcomes I will be looking to attack midfielders against both the Suns and Saints as both are travelling this week. In 2018 the Suns gave up the most points in the league to the position and Saints conceded the 4th most.

A new trend that has appeared this season (albeit a small sample size) is forwards, getting hold of North Melbourne. Through two rounds they have given up the second most points to the position and some big games to key forwards in particular.

The Western Bulldogs game up the most points in the league to opposition number one rucks in 2018. This is a trend that has started off relatively consistent this season, conceding 93 points per game through two rounds, the 4th highest mark in the league.

There are three great options to stack on this slate, with the Western Bulldogs being the standout in the bookmakers’ eyes expected to win by five goals. However, I will be looking out West where the Saints look to get their first real test of the season playing Fremantle at Optus Stadium. 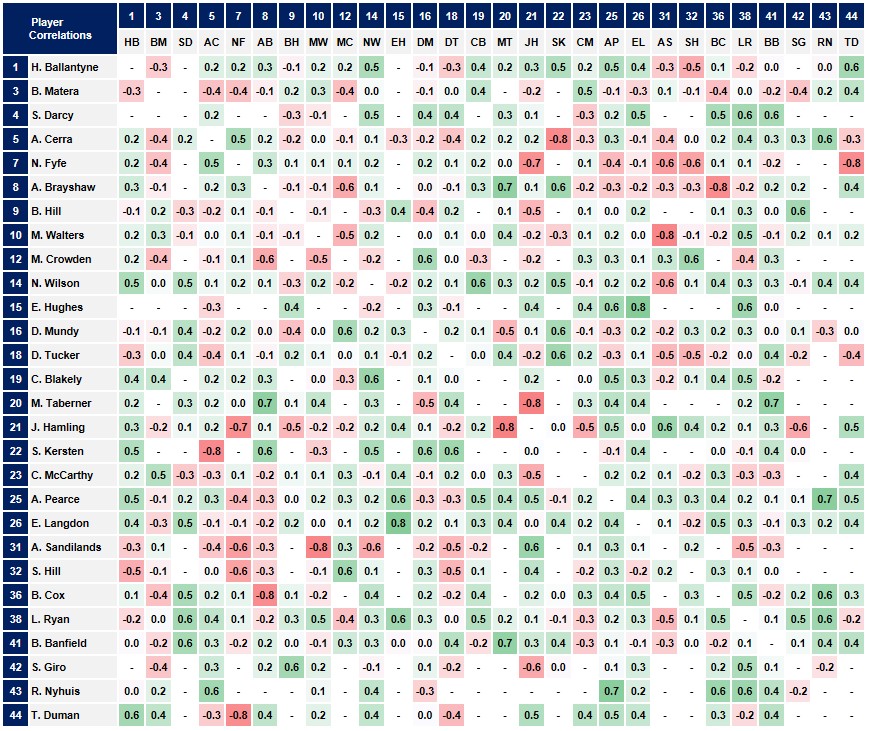 Nathan Fyfe has started the season in a flurry, his highest correlation over the past season has been with half back Luke Ryan at a massive 0.5. Ryan is yet to bust out this season, however he brings a huge ceiling.

In addition Bradley Hill has started the season on fire averaging 121 points through two games. As an outside player he links up well with Ed Langdon (positive 0.2 correlation), and both players are positively correlated with Fyfe and Ryan, making for a nice four player stack.

Peter Wright – FWD (DS $8,410, MB $5,700) is in an elite matchup on this slate. As noted above the Bulldogs have given up the second most points to forwards in the league this season, which is a consistent trend with last year. Wright brings an upside of 90-100 points, whis a GPP winning ceiling at this price.

Ed Langdon – MID (DS $13,150, MB $7,200) absolutely loves the confines of Optus Stadium averaging +11.8 fantasy points on the ground over the his last 14 games on the ground. This includes just four games under 100 points (one of those scores a 97). He also draws a positive matchup as discussed above with the Saints giving up the fourth most points to midfielders in 2018.

Jarrod Witts – RK (DS $13,670, MB $8,100) is just a lock and load plug him in a move on play on this slate. With arguably the top matchup for a ruck in the league against the Western Bulldogs, Witts absolutely monstered Tim English in 2018 posting a whopping 131 points and 58 hit outs.

Marcus Bontempelli – MID (DS $14,760, MB $8,800) has started the year on fire and looks to be running through the middle more than past years. With that role he is still underpriced and draws the Gold Coast who gave up the most points in the league to midfielders in 2018. The Bont also loves Marvel Stadium where he has averaged +12.7 points over his last 39 games on the ground.

The Dragon has also picked out a lineup for the Saturday $2 Mini - feel free to use it as a starting point for your own lineup and adjust to your liking! (YTD after Round 2: $8 spend, $12.96 return) 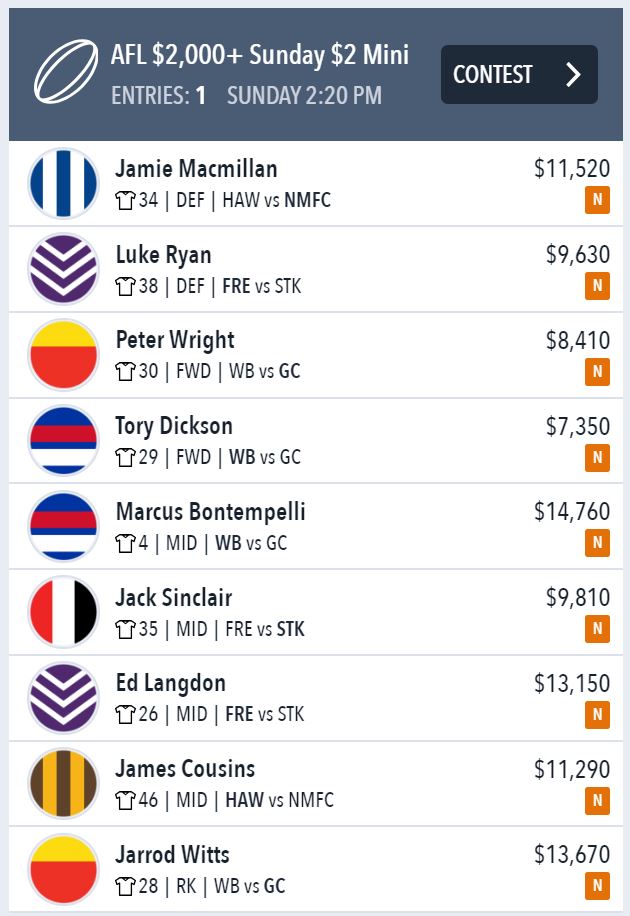