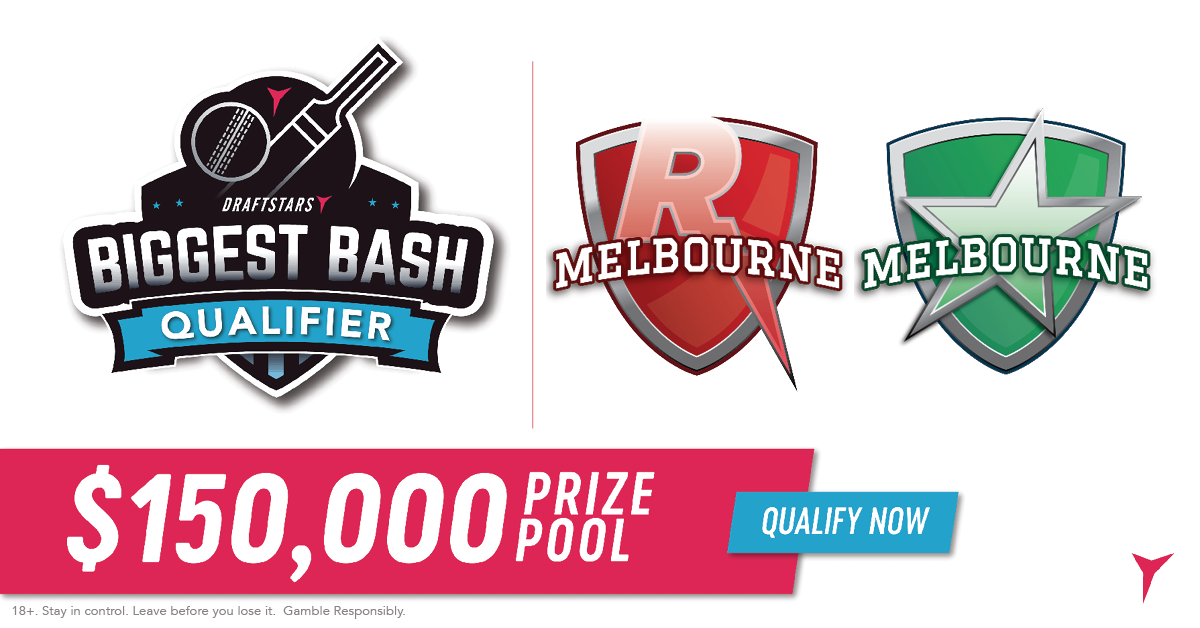 The second Melbourne Derby of BBL08 takes place on Saturday night with the Melbourne Renegades hosting the Melbourne Stars at Marvel Stadium at Docklands. The Renegades currently sit 2nd on the ladder at 5-4 after a big win over the Sixers and welcome back Aaron Finch from Australian duties. The Stars were spanked last time by the Hurricanes to fall to the bottom of the table at 3-5 but regain Marcus Stoinis, Glenn Maxwell and Adam Zampa from the Australian team.

When the two teams played earlier this season it was the Stars successful at the MCG, winning by 7 wickets thanks to an unbeaten 78 from Stoinis.

Marvel Stadium has been hard work for batsmen this season. The Renegades were able to chase down the Scorchers’ measly total of 103 with only 4 wickets in hand in the first game of the season, but were then restricted to 99 themselves when chasing the Sixers moderate total of 7/132 last game. Even the in-form top order of the Hurricanes battled here but a George Bailey masterclass got them to 145, which wasn’t enough as the Renegades got them in the last over four wickets down.

It would be fair to expect similar conditions so angling your lineups towards the bowlers may prove to be a winning ploy.

Check out the interviews we have done with some of the other qualifiers so far this season:

New to Big Bash DFS? There are a wide range of contests across all the main sites so we have a rundown of the best contests to suit you.

If you need more information on some of these players you can check out our squad profiles of the Melbourne Renegades and the Melbourne Stars before you start building your lineups.

Aaron Finch ($17,800) might be struggling with the bat playing against the Indians but he looked better last time when he dropped back to BBL with 42 off 39 balls here against the Hurricanes. Has an incredible record here and is the obvious batsman from the Renegades who can make a match winning score so this salary is quite reasonable. Should be popular but for good reason because if he gets going it will be hard to win without him.

Although Evan Gulbis has been doing a good job at the top of the order, expect Marcus Stoinis ($21,100) to return to the opening position after his blistering unbeaten 78 against the Renegades in that role earlier this season. He also took two wickets in that game, flashing his enormous upside with a fantasy score of 174.5. His ability to score in all categories makes him very playable even at the big salary.

Dwayne Bravo ($17,400) knows this ground well having played previously for the Renegades and the pitch will suit his variety of deliveries. The fact that it has given up a lot of wickets this season also means he may get more opportunity than usual with the bat and he has shown a bit of touch with 52 runs across his past two matches. He is always a threat of scoring three figures and is a good batting option in your bowler-heavy lineups.

Kane Richardson ($15,400) was superb in Sydney last time in his return from injury, taking 3/26 off four overs. Incredibly that was his fourth haul of three wickets in only seven games this season and he has taken three wickets in all three games he has played at this ground. With numbers like that, he is an obvious bowling play at a very reasonable salary.

Liam Plunkett ($11,700) is going to enjoy bowling on this pitch after toiling away at the MCG and Adelaide Oval. At this price he has genuine upside as displayed by his four wickets against the Strikers. An unfamiliar name to many Australians, he is capable of taking multiple wickets on this pitch and could make a nice point of difference for your lineup.

Jack Wildermuth ($11,500) has pretty plain form of late which has resulted in his price getting to its lowest point in a while. The key to him could be getting back to Marvel Stadium where he has scores of 76, 94 and 44 so far this year. Any of those scores would be valuable at this salary and he can also be used as a batsman to give you extra flexibility with your lineups. Definitely worth overlooking his recent form to use him as one of your value players.