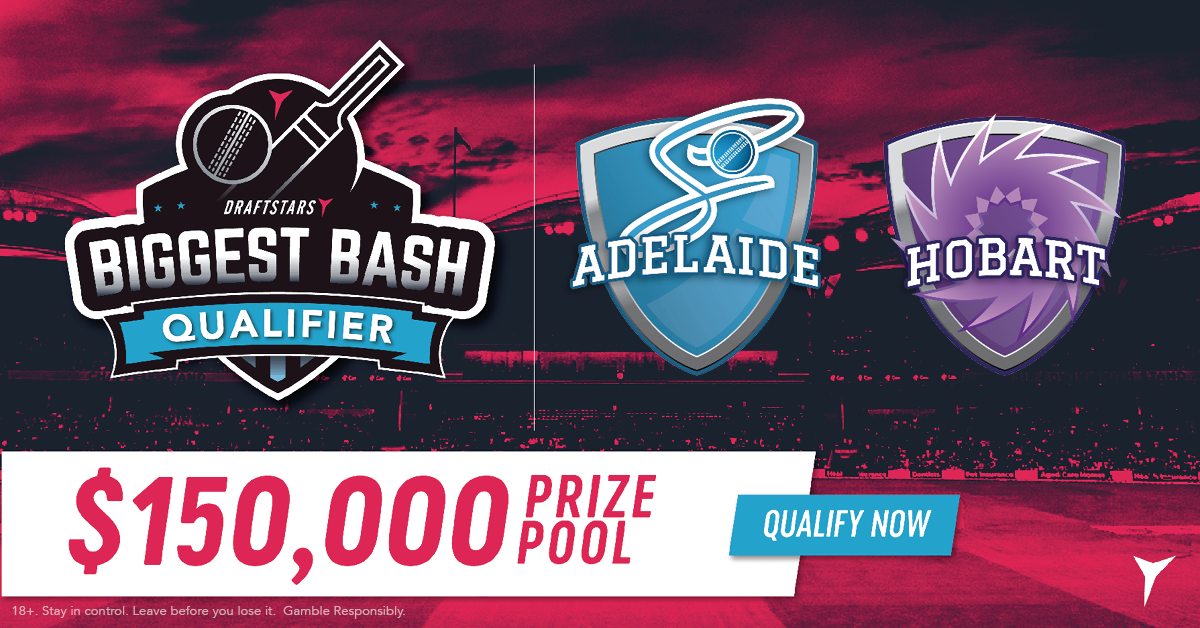 BBL08 will see the rematch of the BBL07 Grand Final on Monday night, with the reigning premiers the Adelaide Strikers hosting the Hobart Hurricanes at the Adelaide Oval. The Strikers are perilously placed at 4-4 on a crowded ladder after being smashed by the Sydney Thunder in their last match. Meanwhile the Hurricanes pulled off an incredible win against the Scorchers on Friday night and sit two games clear at the top of the table with two games in hand.

These two teams haven’t played since last year’s final, when Jake Weatherald smashed 115 off 70 balls and the Strikers’ 202 was too much for Hobart to chase.

The Adelaide Oval is one of the higher scoring grounds for teams batting first but the overall statistics indicate the scoring to be middle of the road. The pitch appears to be playing well so there is no obvious edge to either the fast bowlers or the spinners, while batsmen are getting every opportunity to score runs here if good enough – something that can’t be said for a few of the other grounds in the competition.

If you need more information on some of these players you can check out our squad profiles of the Adelaide Strikers and the Hobart Hurricanes before you start building your lineups.

D’arcy Short ($23,200) has come back in salary after missing out in two of his past three matches. While he put on a clinic against the Stars who were minus their Australian reps, he failed with the bat against the Renegades (on a notoriously difficult Marvel Stadium deck) and the Scorchers (against a well regarded bowling attack). The Strikers are also strong in the bowling ranks but this is generally a friendly batting wicket so you may be rewarded by keeping the faith when others start to second guess his price tag.

As mentioned above, Jake Weatherald ($15,000) destroyed the Hurricane bowling attack in last year’s final. His upside is obviously immense – highlighted by his 71 off 44 balls against the Renegades earlier this season which scored him 122 fantasy points – but given all but two of his scores have been below 42 he brings plenty of risk. That said, you don’t win a Big Bash DFS contest by playing it safe and Weatherald is the type of batsmen that can provide you a winning score so at least some exposure to him seems a must.

The number 3 batting position for the Hurricanes has been extremely problematic this season but youngster Caleb Jewell ($10,900) looked the part in Perth on debut. His 32 came off only 20 deliveries and he gave the Hurricanes a punch from number 3 they haven’t yet had. To fit some of the big names into your lineup you are going to need to save salary in places and Jewell looks a very viable option given the opportunity he has batting up the order.

Rashid Khan ($22,300) continues to churn out big numbers with a season average of 88.7. Amazingly he has only gone below 63 points once and six of his eight scores have been above 85! The Hurricanes have proved to be one of the stronger batting lineups in the competition but Khan is matchup proof and a reasonably safe play – even at this high salary – for you to build a lineup around.

Riley Meredith ($15,500) is a young quick for the Hurricanes who has been most impressive throughout the season, taking 13 wickets as well as earning an economy bonus in half of his matches. He bowls with genuine pace which might help him overcome a flatter Adelaide pitch and the Strikers do have a long-ish tail which may bring him late wickets. At this salary he will be hard to fit into lineups playing the big guns Short and Khan, but this may bring you 100+ point upside at a low ownership.

Ben Laughlin ($11,700) made his name in T20 cricket as a Hurricane and should be extremely motivated coming up against his former side. He has had a disappointing season on the whole but three wickets against the Stars here two games ago showed he still has enough tricks to do some damage. A proven wicket taker at a price which helps you spend up on the guns makes him a valid play.