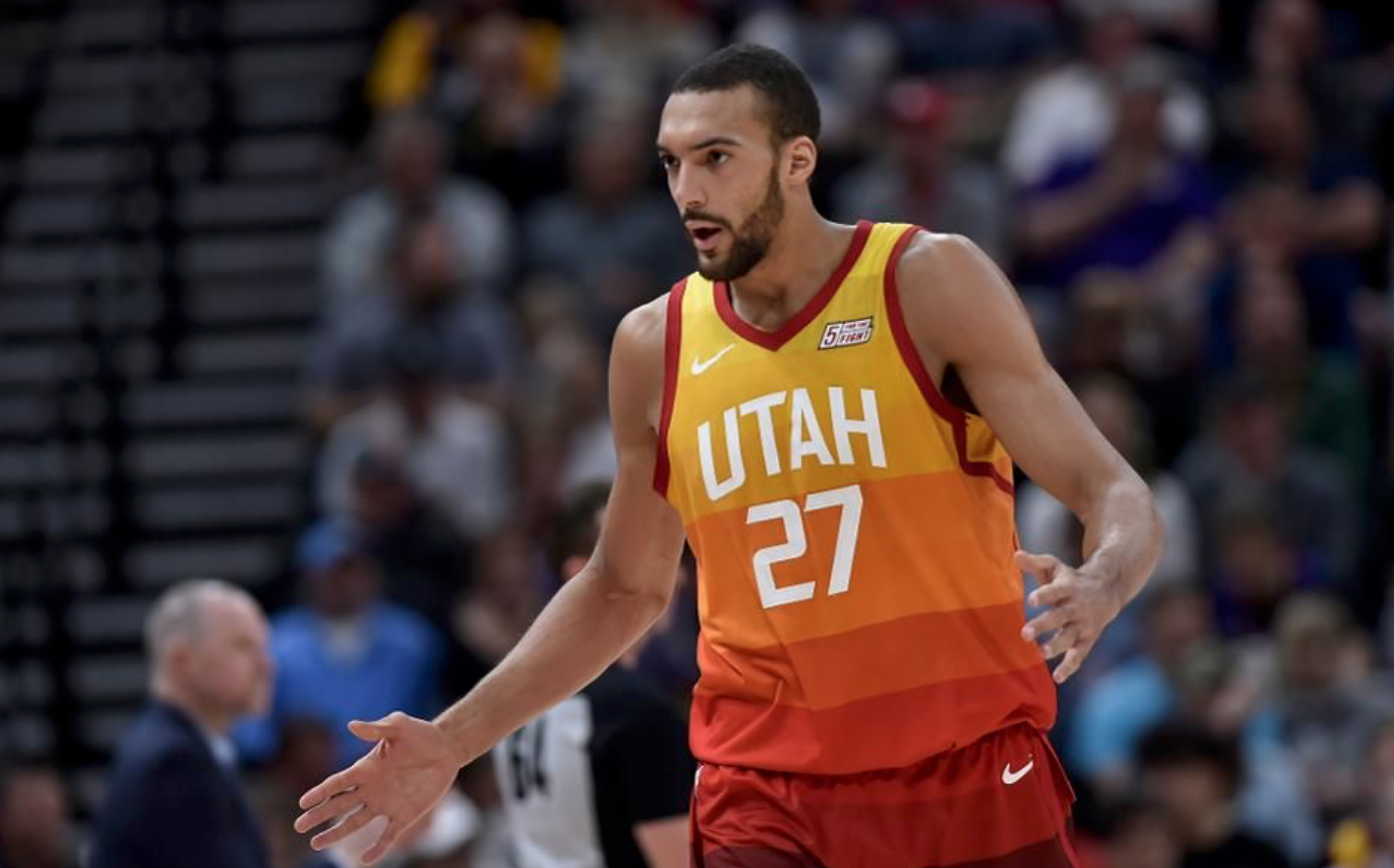 Another week of the season draws to a close, which means another weekend is here with massive slates of NBA action on offer. NBA Friday (Saturday AEST) brings a huge 10 game slate to play. There are the usual array of major daily fantasy contests to choose from across each of the major platforms:

The top game total on the slate is a juicy 233.5 points between Charlotte and Washington. The Wizards have played a top 5 pace this season while also having the second worst defense in the league. This puts Charlotte, who have played at a slow pace this year, in a pace up matchup. The Hornetts also can be attacked defensively, ranked 23rd in defensive efficiency this season. As a result I expect this game to be one of the more popular on the slate.

There is only one other game currently listed with a total of 225 points or higher. This matchup is Atlanta at Detroit. Despite this total, neither team plays at a very fast pace with Atlanta ranked 11th and Detroit a snail's pace, ranked 25th. Both sides are in the bottom 7 in the league in defensive efficiency this year, which opens up several opportunities to target on this slate.

The number 1 matchup in my opinion on this slate is Sacramento at Brooklyn. This game is yet to have a line and total set, however Sactremento find themselves in the top pace up matchup on the slate as they face the 6th fastest team in the league this year.

Utah is another team that has an elite matchup. Playing the Santa Cruz Warriors they are in a slight pace up spot, however the main draw card is the fact that the Warriors are not only the worst defensive team in the league this year, but that their defensive efficiency is historically bad. They have given up the 2nd most fantasy points in the league this season. There will be a blowout risk to consider, however as we saw in the Warriors game against Dallas it doesn’t mean players can’t hit their ceiling in reduced minutes.

Kyrie Irving remains out for the match against Sacramento. Spencer Dinwiddie has taken over the starting point guard role with Irving out this year and he has been a total monster, averaging +14 fantasy points from an additional 7.8 minutes of playing time in the 3 games Irving has missed. 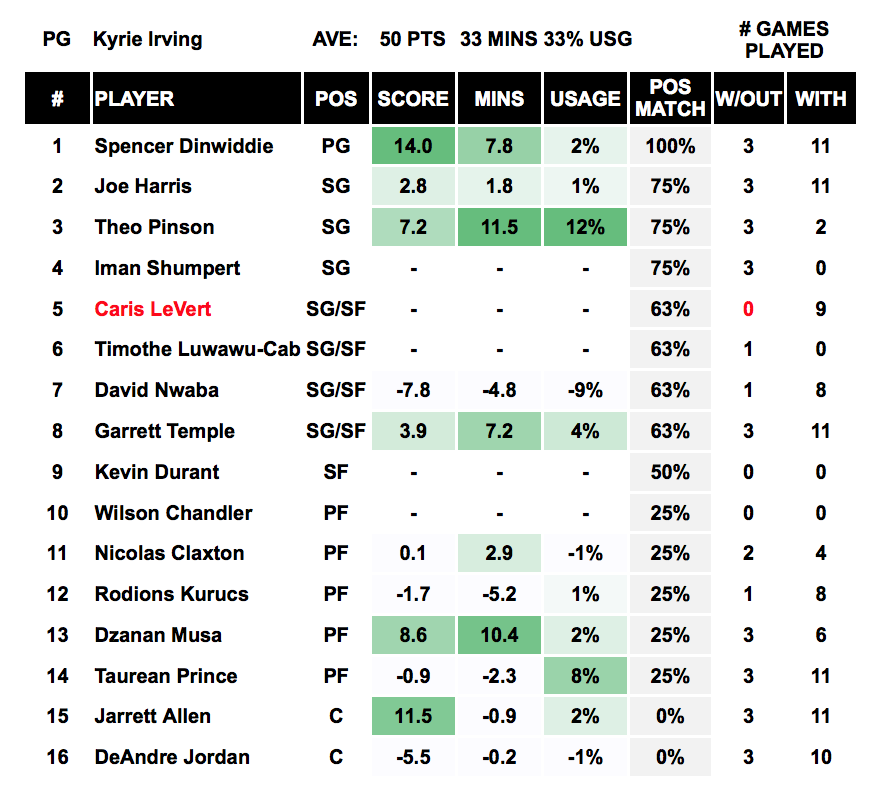 Seth Curry is questionable for the match against Cleveland. Last game it was Tim Hardaway Jr who replace Curry in the starting lineup with the idea of keeping a certain level of shooting on the floor for the Mavericks. Hardaway responded with 27 fantasy points from just 22 minutes in a blowout, but beware he did go 6/7 from the floor, including 4/4 from deep, so that score might come back to earth next game.

Draymond Green is questionable for the game against Utah. With Green and Russell out Ky Bowman has been the starting point guard averaging +9 fantasy points from an additional 14 minutes of playing time. Eric Paschall and Alex Burks also receive an increase in minutes that has resulted in +10.3 and +6.8 fantasy points respectively. 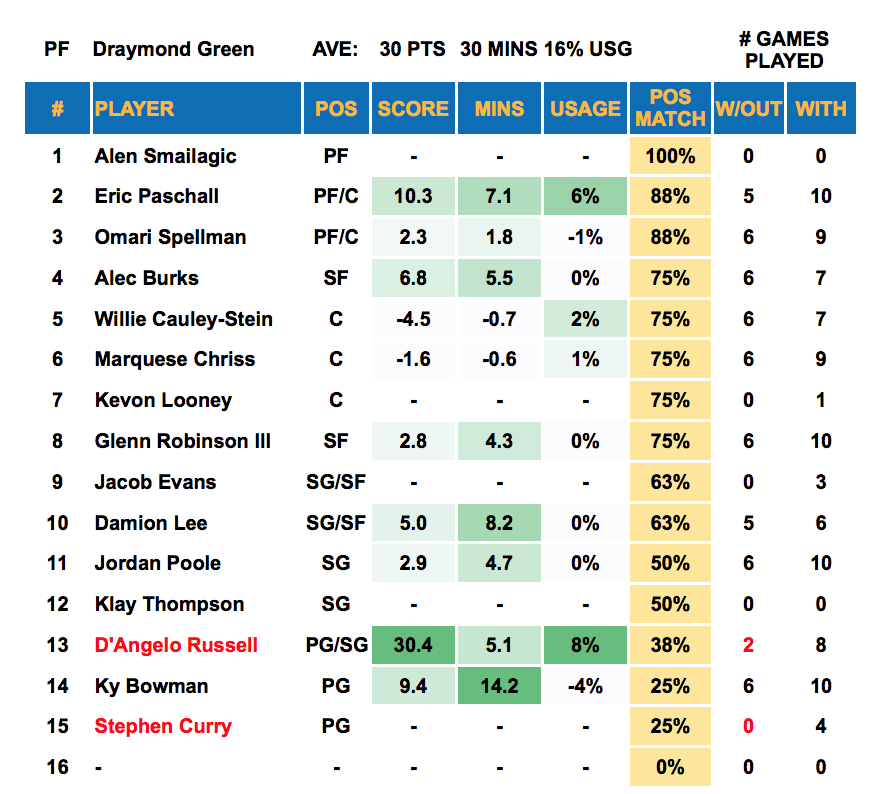 Josh Richardson is questionable for the game against San Antonio. In the single game Richardson has missed this year Ben Simmons played an addition 9 minutes of game time and this resulted in him posting +15,7 fantasy points. There are no significant stand outs in usage from the game Richardson missed, however it should be noted that Joel Embiid did see a +2% usage bump. 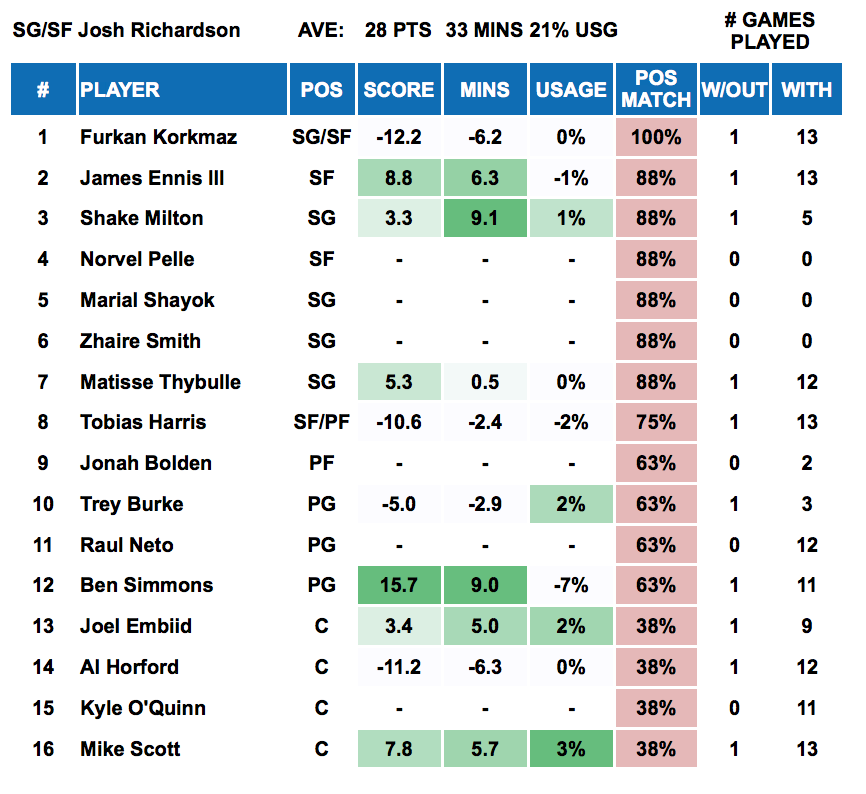 Corey Joseph and Bogdan Bogdanovic are both questionable for the game against Brooklyn. If both players are out on this slate it will Yogi Ferrall day. Yogi has averaged 0.75 fantasy points per minute this season and would be expected to see upwards of 30 minutes if both players miss this matchup.

Derrick White is questionable for the game against Philadelphia. Despite coming off the bench this year White is still playing 24 minutes per game with a 21% usage rate that will be picked up by the remaining Spurs point guards. Patty Mills took over the starting point guard role and shot the lights to the tune of +12.2 fantasy points from an extra 9 minutes of playing time. 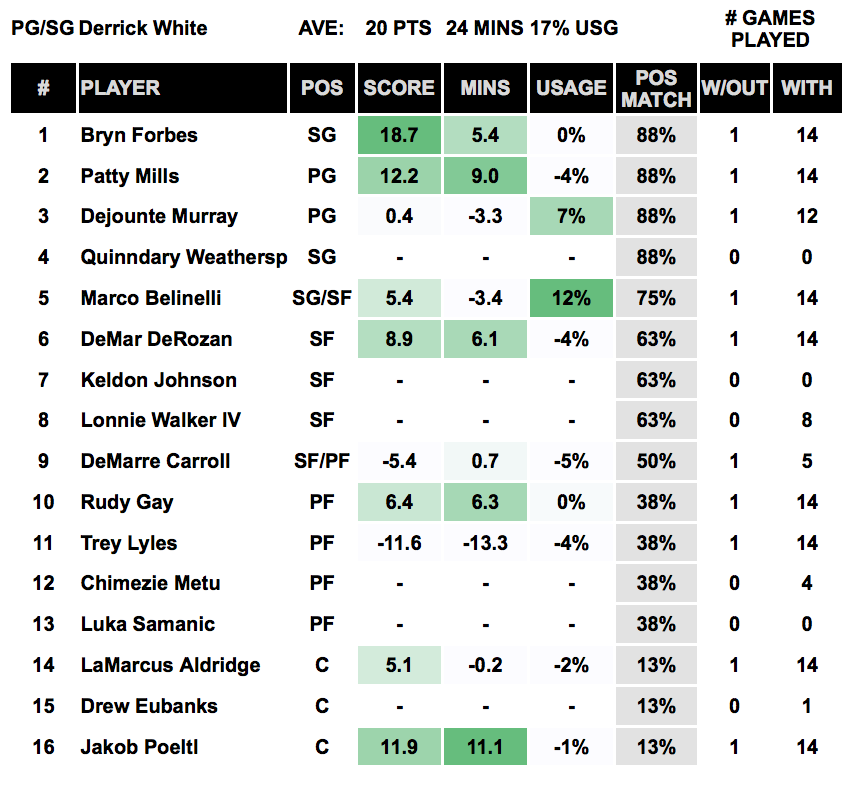 Jakob Poeltl (MB $4,200, DS $7,650, DK $4,900) was brought into the starting lineup last game to help improve the Spurs defense at the rim… who would have thought that Trey Lyles and Lamarcus Aldridge would struggle with this? Poetl has averaged over 1 fantasy points per minute this season and as the starter last game got his biggest workload this year logging 26 minutes en route to 27 fantasy points. While this is as easy a matchup against the 76ers he is likely going to be required to matchup against Embiid, which means 30+ minutes could be on the cards.

Shaquille Harrison (MB $3,500, DS $7,380, DK $5,000) moved into the starting lineup last game as the starting point guard while the flailing Bulls trying to find anything that will work. He responded with a ridiculous 45 fantasy point performance from just 26 minutes of game time. His price is yet to move at Moneyball where he will be one of the chalk plays of the slate and should be if his minutes are expected to continue.

Richaun Holmes (MB $6,800, DS $12,620, DK $6,300) draws one of the top matchups in the league on this slate against the Brooklyn Nets who have given up the 4th most fantasy points to centres this year. Holmes has put up just over 1 fantasy point per minute this season and should play 30+ minutes on this slate. As mentioned above it is a pace up matchup for the Kings, which should suit Holmes. In the event that Joseph and Bogdanivic are out there will also be plenty of usage opening up that should filter down to the remaining starters (Nemanja Bjelicia is another King who is in play).

Thomas Bryant (MB $6,900, DS $11,750, DK $6,600) is a sneaky GPP play on this slate. He has shown the 40+ point ceiling this year and even higher at times last season. He is in an elite matchup against the Hornetts who have been decimated by centres all season conceding the fourth most fantasy points to the position this season.

Rudy Gobert (MB $8,500, DS $16,790, DK $8,200)... there are centre options everywhere on this slate. As noted above with the Warriors ranked dead last in defensive efficiency you can make a case for any member of the Jazz tonight (Donovan Mitchell is another of my favourite plays). The blowout is the major risk, but Gobert is in a position to smash on this slate with the Warriors giving up the third most points in the league to centres over the last two games. More importantly they have given up the 7th most rebounds in the league to center, which will play right into Gobert's strength as he has had 14+ rebounds in every 40+ fantasy point game this year. 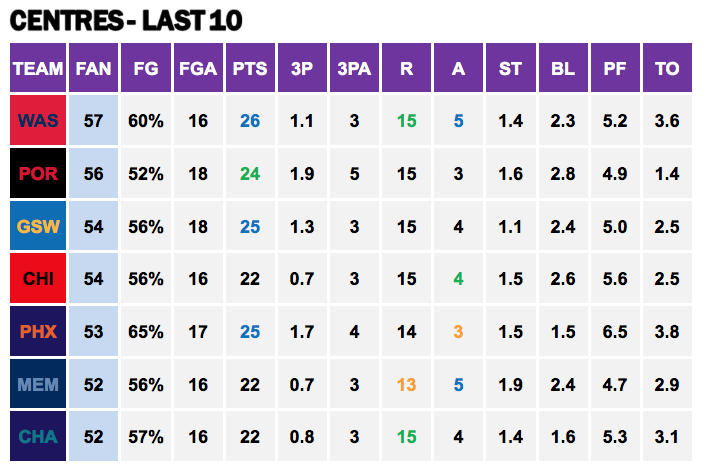 Luka Doncic (MB $12,000, DS $24,160, DK $11,400) … we just have to talk about this. Doncic is doing things never seen before from a 20 year old. Averaging a ridiculous 30p 10r and 9a he has posted 4 70+ fantasy point games from his last 7 games (and 3 from his last 4). On Thursday he had 77 fantasy points in just 26 minutes of playing time. On this slate the matchup isn’t ideal on the surface with the Cavaliers playing below at a below average pace, however his individual matchup stands out as they have no one to guard him. Their backcourt in Garland and Sexton is undersized and both have struggles on the defensive end. The Cavaliers have also given up the second most assists to point guards this season, which means another triple double is likely on the cards for Luka in this matchup. 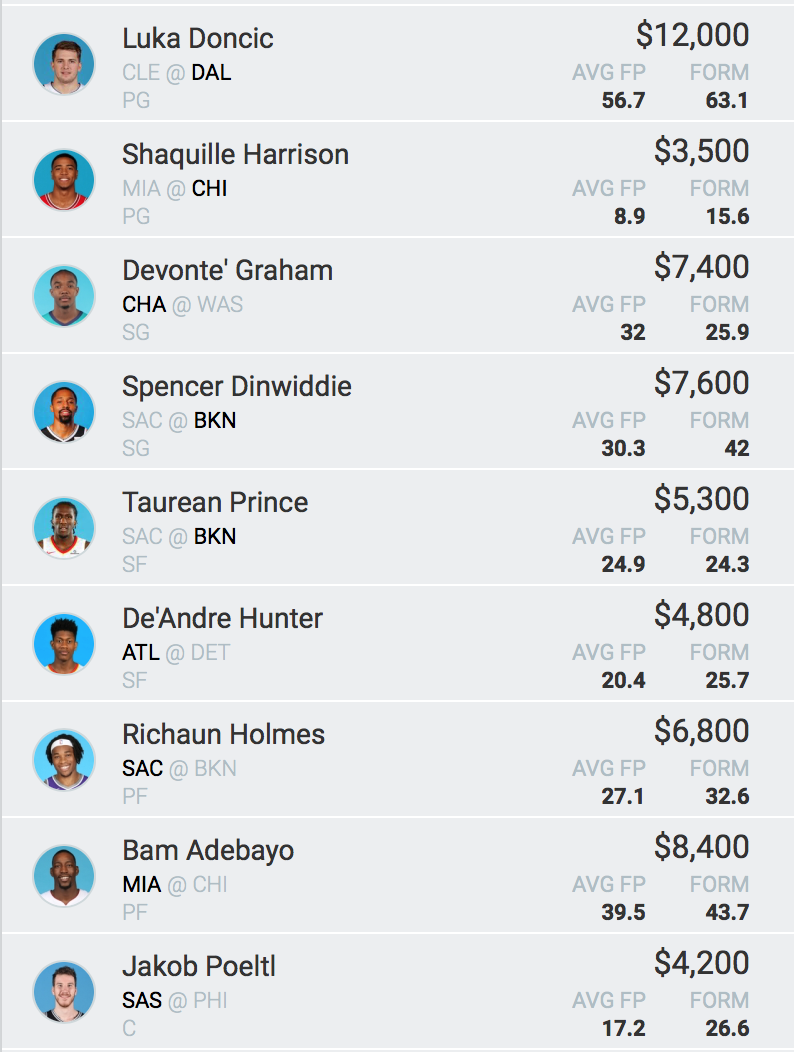