The weekend is here and that means yet another monster sized slate of NBA basketball. NBA Friday (Saturday AEST) offers a 10 game main slate to dive into. As usual there are major daily fantasy contests on offer across all platforms:

Back to reality with 5 games on this slate yet to have total set as we await injury news. As always I have broken down the major impact to possible lineups that have DFS implications below.

The top game total on this slate is Houston at Minnesota at 234 points. This game has the highest projected pace on the slate, putting both sides in a pace up matchup with Houston playing at the second fastest pace in the league and Minnesota seventh. Both teams are around league average defensively this season, however the uptempo game style has resulted in both side top ten for most fantasy points conceded. This will be one of the most popular games to target on the slate and I will certainly be looking to have significant exposure.

The other game with a total over 230 points is Denver at New Orleans. My initial thought was this seemed high for a game involving the Nuggets, however with them short handed due to injuries their defense has fallen off a cliff (25th in the league the last 3 games). They will be in a pace up spot against the Pelicans who play at the 4th fastest pace in the league. It is worth highlighting that despite the high total I will be cautious about rostering New Orleans players on this slate as they are now close to fully healthy, meaning there will be a new division of usage set over the coming games.

My favourite game on this slate that is yet to have a total set is Memphis at Detroit. Memphis play at the 3rd fastest pace in the league this season, which puts the Pistons is a nice pace up matchup. Both sides are bottom 10 in defensive efficiency and Mephis have conceded the 5th most fantasy points this season.

Trae Young is questionable for the game against the Thunder. Jeff Teague started at point guard last game without Young in the lineup, however he failed miserably as a chalk play notching up just 18 fantasy points. That said, despite getting benched late he still played 25 minutes and based on his fantasy output this season should be solid play again if Young is out. John Collins was the player whose performance lifted without Young last game posting a massive 67 fantasy points while taking 22 field goal attempts. 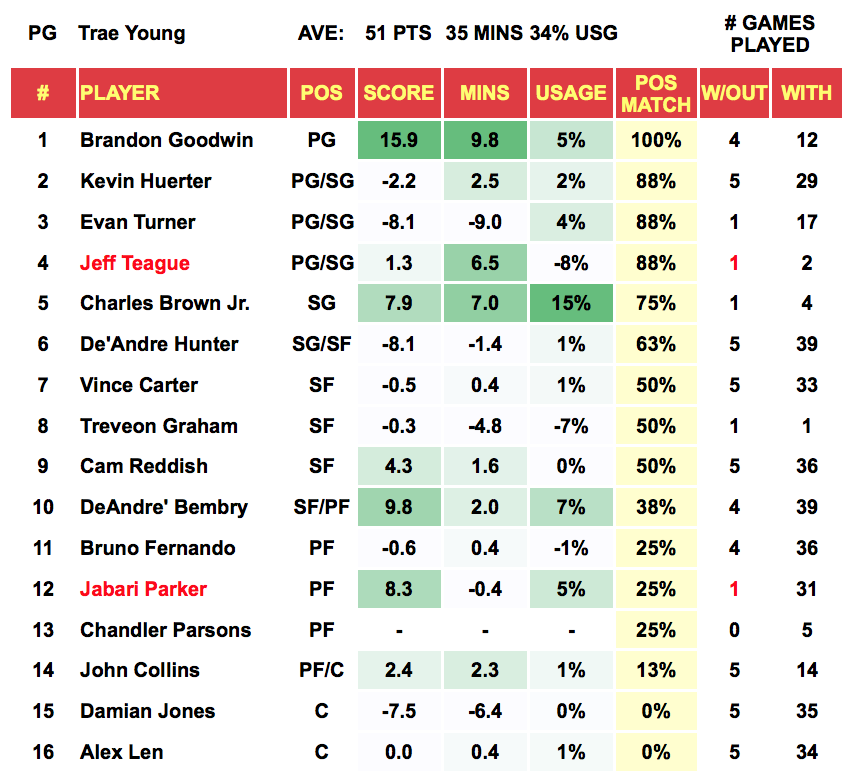 Jaylen Brown and Jayson Tatum are questionable for the game against the Magic, while Enes Kanter has been ruled out. Without Kanter in the lineup we can expect a minutes boost for Daniel Theis (+2 minutes per game). Meanwhile if Brown and Tatum are both out it will significant boost usage for Kemba Walker and Gordon Hayward, while Marcus Smart will replace one of them in the starting lineup.

Jamal Murray, Paul Milsap and Mason Plumlee remain out, while Gary Harris and Michael Porter Jr. are questionable for the game against New Orleans. The Nuggets have been totally decimated in recent games from a lengthy injury list that is not improving anytime soon. Will Barton and Nikolc Jokic should have a lion's share of the usage, while Monte Morris has started in place of Murray and posted over 20 fantasy points in the last two games. The prices are starting to rise on these players now, however if Porter Jr. plays he has the upside to pay off his price tag and he should be locked into 30 plus minutes.

Jimmy Butler, Kendrick Nunn and Goran Dragic are all questionable for the game against the Clippers. Hard to analyse this too closely without knowing the final lineup, however broadly of these three players all directly impact each other. So in short, whoever plays will get a usage and minutes increase as a result of the players who miss. If they were all out, look to bench players such as Tyler Herro and James Johnson to come in and soak up the minutes and usage.

Steven Adams is questionable for the game against Atlanta. Nerlens Noel is the go to play if Adams is out. He has started in 5 games without Adams this season, which has resulted in +10 fantasy points from an additional 9 minutes of playing time. 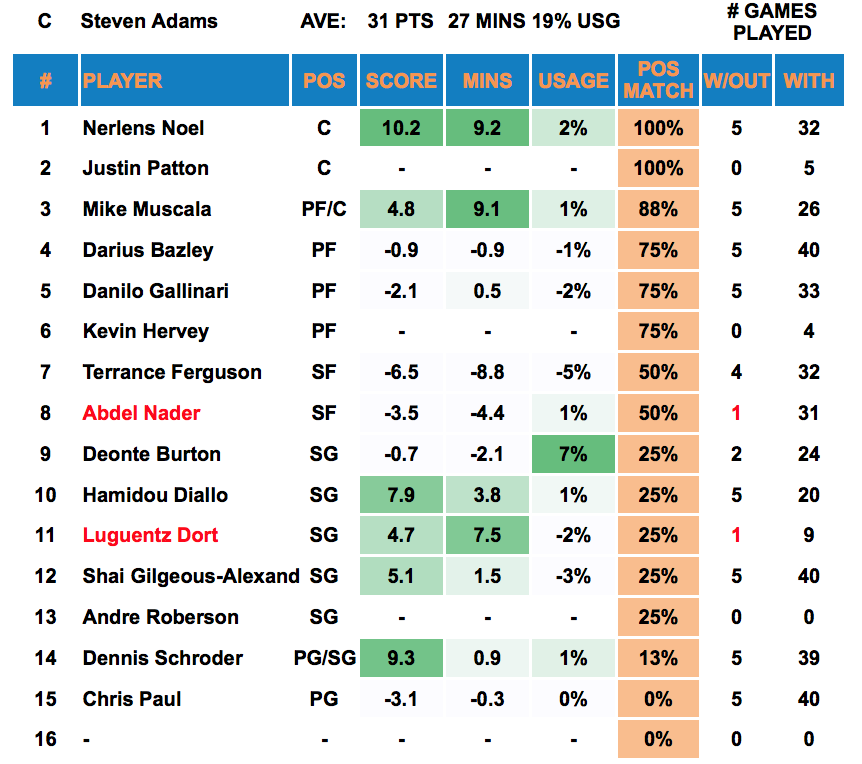 Marvin Bagely won't play against the Bulls. With Holmes also out it was Dwayne Dedmon in the starting lineup last game. Dedmon responded, playing 31 minutes and returning 30 fantasy points.

Kris Dunn (DS $8,430, DK $5,500, MB $5,000) has been a great value option in recent games posting back to back 30 point games and over 24 in each of his last three. His price is still too cheap on Draftstars, and he is playing a variety of roles with Sataransky’s minutes dipping and as a result his playmaking has been on the rise. In this matchup he faces the Kings who have given up the equal fifth most fantasy points to guards over the past 10 games. 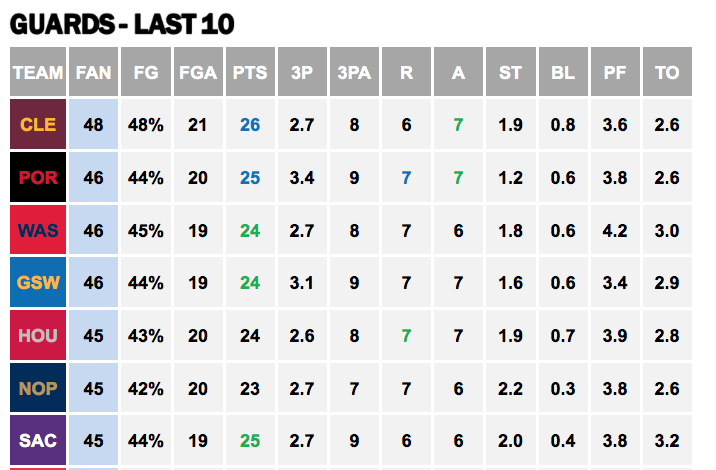 Andrew Wiggins (DS $12,940, DK $7,000, MB $6,700) is a great GPP play on this slate, particularly if you are looking to stack up the Houston vs Minnesota game. With the limited roster the Wolves now have Wiggins is doing a lot of play making, which he showed last game notching up 9 assists to go with his 46 fantasy points. This season he has shown 60 point upside and this pace up matchup will suit his game play and in addition the Rockets have given up the second most fantasy points to shooting guards this year.

TJ Warren (DS $10,260, DK $6,000, MB $6,000) is in an elite matchup on this slate against the Golden State Warriors who are bottom 10 in defensive efficiency and have conceded the equal third most fantasy points to small forwards over the past 10 games. Warren has flashed 45-50 point upside this season and should see a boost in opportunity without Malcolm Brogdan in the lineup. 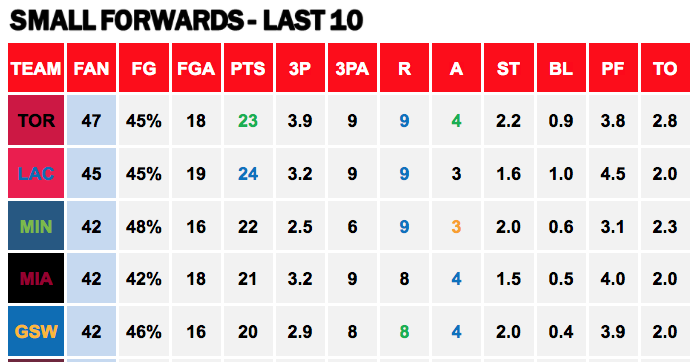 James Harden (DS $23,030, DK $11,200, MB $11,400) is seeing his price start to dip, particularly on DraftKings where he stands out to me. As is always the case with Harden his shooting streaks fluctuate throughout the season and currently he is on a disastrous run going 11/57 from deep over the past 5 games (just 19%). This will tick backup and as usual it will all happen in one game so you will want to be on it when he strikes. This matchup is as good as any for Harden as the Rockets will be playing pace up against the Timberwolves.

Pascal Siakam (DS $14,900, DK $7,700, MB $7,600) is still under priced for a player averaging 42 fantasy points per game. His minutes ticked back over the 30 mark last game for the fire time since returning from injury and he return 44 fantasy points despite shooting just 8/23 from the field (including 1/8 from deep). On this slate he faces the New York Knicks who have been decimated by the power forward and small forward position (and every position?) all season. 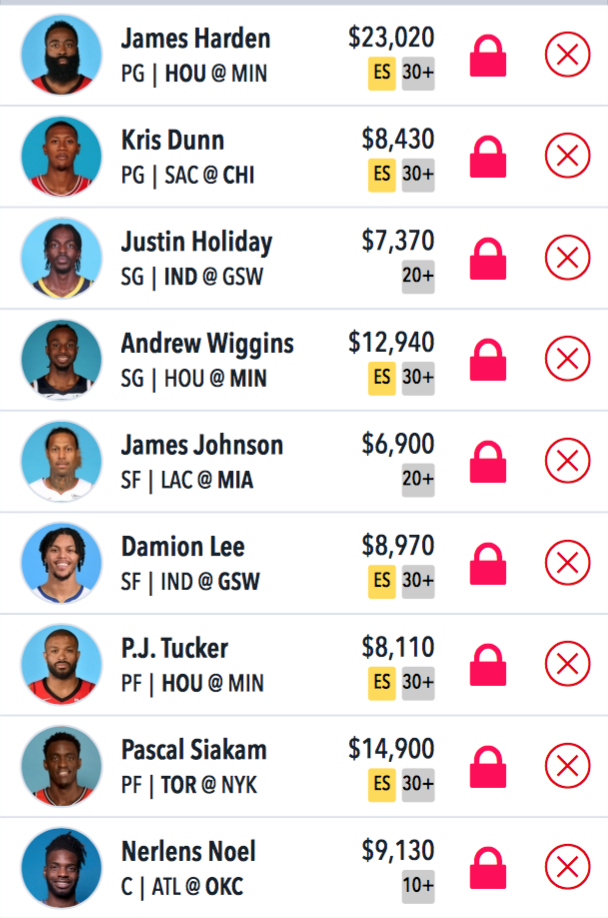