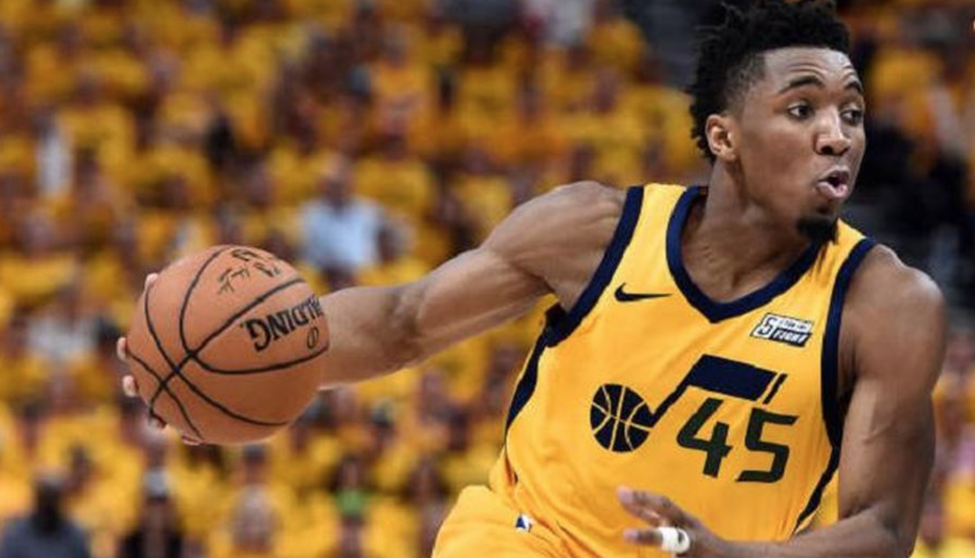 Another week down, which means another weekend is here and it will be wall to wall NBA action.  NBA Friday (Saturday AEST) delivers a monster 10 game slate to sink our teeth into. The usual major daily fantasy tournaments on offer across the platforms:

Once again, we are blessed with plenty of DFS friendly matchups on this slate. At this stage we still have 5 games yet to have a total set as we await injury news and as always, I have broken down the major impact of the news for fantasy below.

The top total listed currently is Minnesota at Orlando at a monster 235 points. I have been mentioning this in every preview of late, but it must continue to be hammered home that the Timberwolves have been an absolute dream for fantasy points since the trade deadline. They are playing at the fastest pace in the league over the past 7 games and giving up the second most fantasy points. This puts the Magic in arguably the best match-up in the league right now, and their implied point total is a massive +16.6 points above their league average. Let’s pile in!

The next highest total also involves an elite match-up. Washington at Utah is 230 points and in this one the Jazz face what has been one of the best teams to target all season. The Wizards play at the 4th fastest pace, are ranked dead last in defensive efficiency and give up the second most fantasy points this season. The only real concern is the Jazz marked as 10-point favourites, which means a blowout is a distinct possibility.

Plenty of teams in pace up spots on this slate. The game that truly stands out to me as one to target that is yet to have a total set is Brooklyn vs Atlanta. The Nets are in the third biggest pace up match-up on the slate with the Hawks playing at the 7th fastest pace this season. They are also 28th in defensive efficiency and have conceded the most fantasy points in the league this season. I have no issue targeting the Nets at specific positions as well, which means this game is the ideal for stacking. It is made even better by the fact the line is set at 2.5 points, which means we can expect it to remain close.

Trae Young is questionable for the game against the Nets. This will leave us with the inevitable choice between Jeff Teague, who will likely get the start, and Brandon Goodwin off the bench. Teague has been relatively miserable in the two games he has played without Young thus far, barely improving his average while having a 7% lower usage rate (small sample). That said he is averaging 24 fantasy points per game on the season so at his price breaking even on that is a huge success, and we can expect him to play an additional 5 minutes. 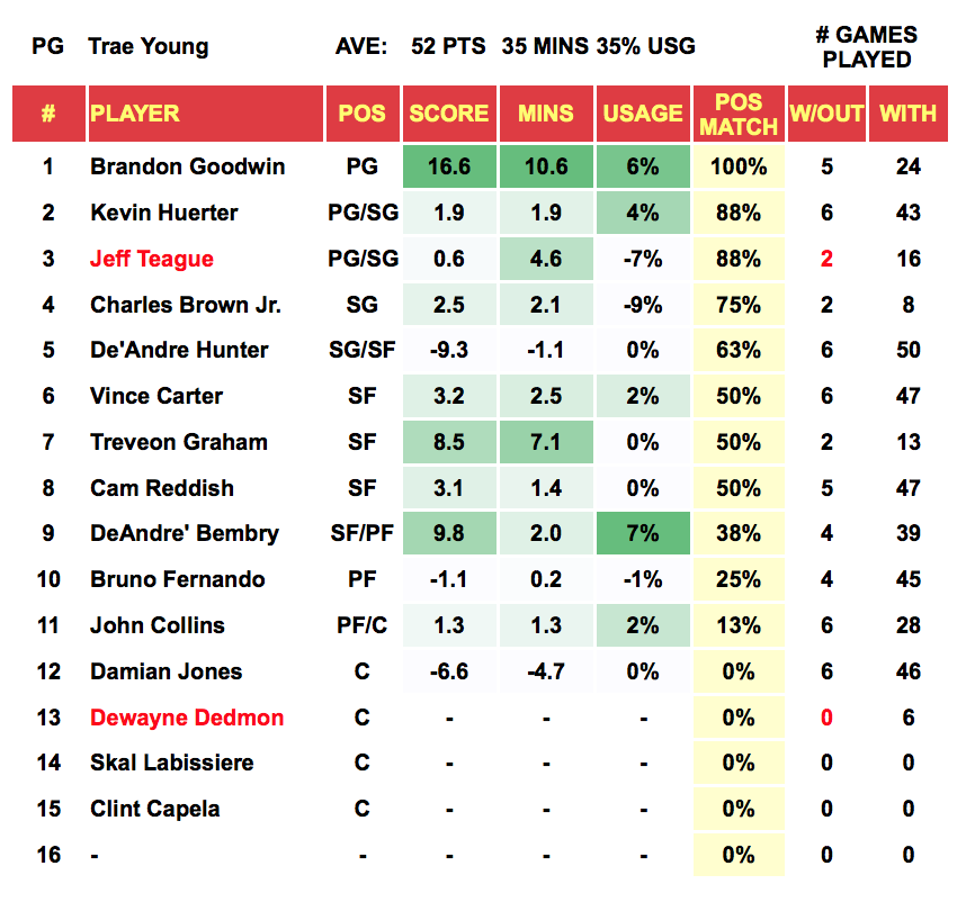 Luka Doncic is questionable for the game against the Heat. This season when Luka has been out the lock and load play has been to load up on Kristaps Porzingis who has averaged a massive +14.5 fantasy points in 9 games without Doncic in the lineup. The only question mark in this game will be the match-up is relatively difficult against the Heat. Tim Hardaway Jr and Seth Curry have also shown to get significant boosts in production, particularly given that Jalen Brunson is also out at the moment. 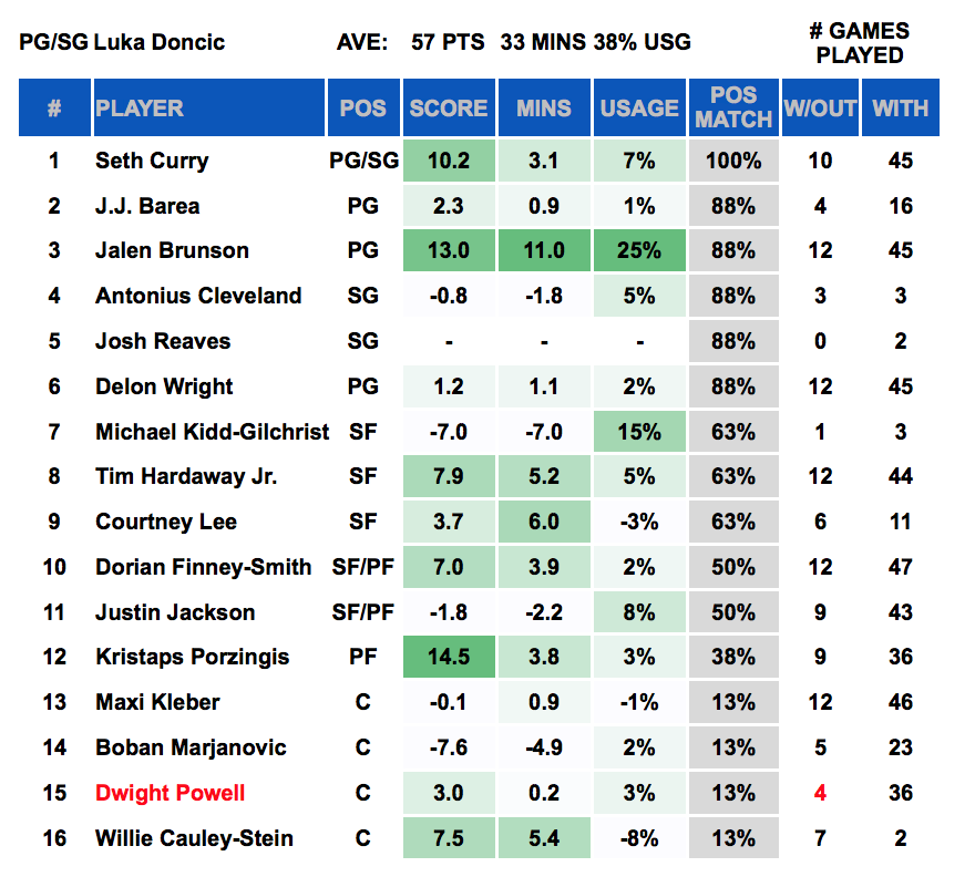 Serge Ibaka is questionable for the game against Charlotte. With Marc Gasol also still out, no Ibaka would open up a world of different options for the Raptors. The obvious play would be Chris Boucher who has played an additional 5 minutes per game for +6 fantasy points without Ibaka this season. If you recall last time we were in this situation, however, Nick Nurse pulled a swifly on everyone and started Richard Hollis-Jefferson at centre, leaving the Boucher chalk redundant. So, keep an eye on the starting lineups if Serge misses on this slate. 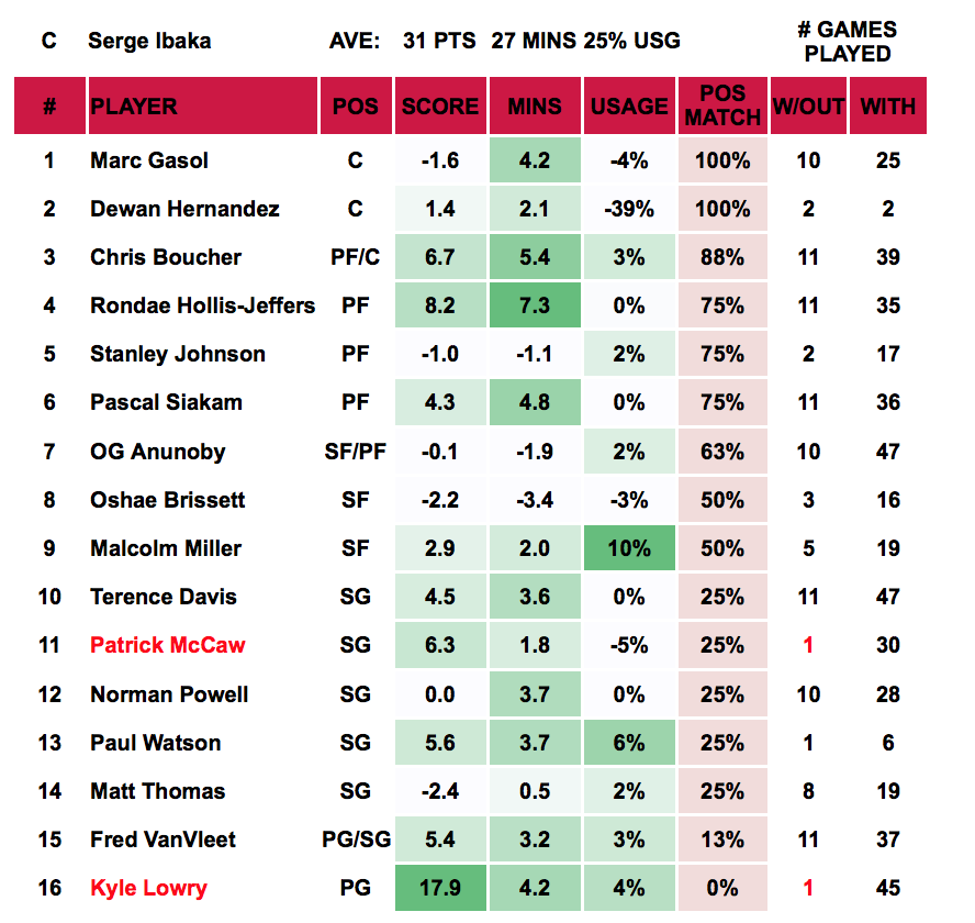 De’Aaron Fox missed today’s game, however, remains optimistic about being able to go against the Grizzlies. Corey Joseph started at point guard in his place today and returned 30 fantasy points from 35 minutes of playing time. The other player to consider is Bogdan Bogdanovic who gets a 5% usage boost in games without Fox this season. 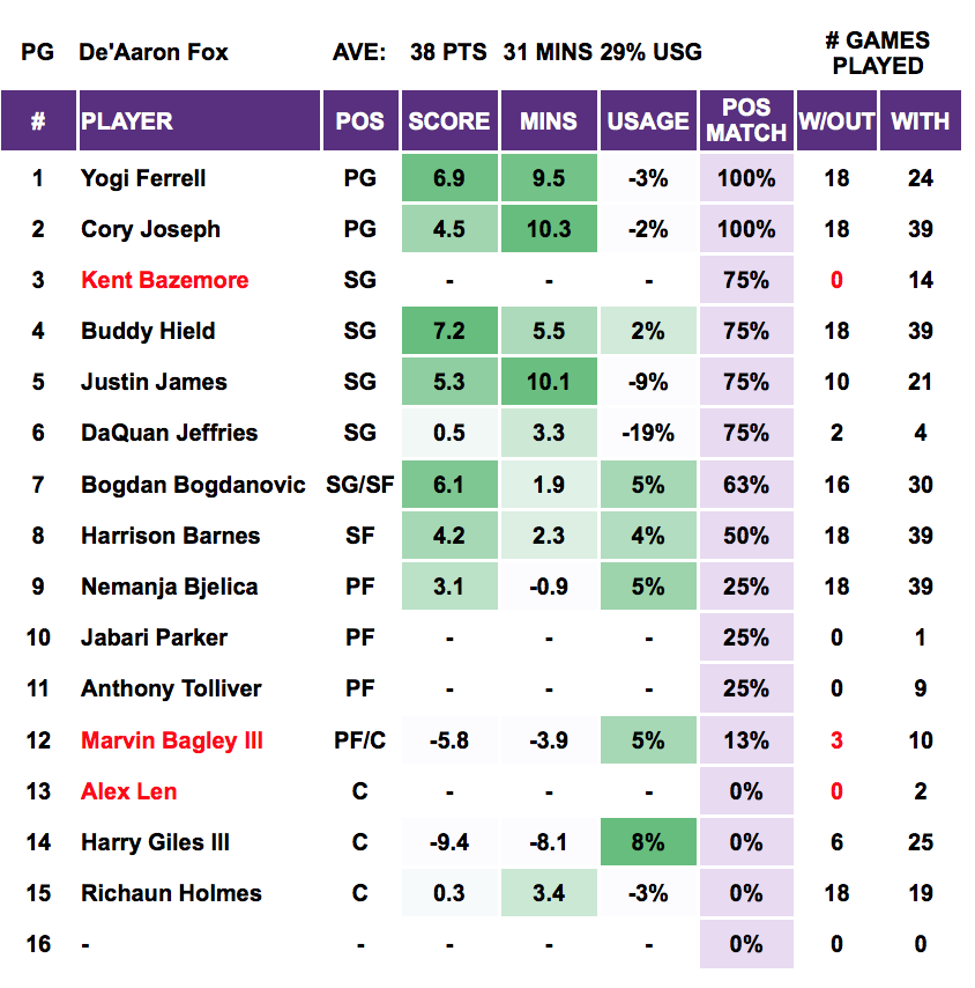 In addition to the possible value plays noted above (Jeff Teague, Richard Hollis-Jefferson):

James Ennis (DS $5,150, DK $3,700, MB $3,800) has taken the starting small forward position for the Magic playing 27+ minutes in each of the last two games. He averages 0.78 fantasy points per minute this season, which is no superhuman effort by any stretch by any means, but at his current allotment of playing should put him around 20-22 fantasy points. He also draws an elite match-up against the Timberwolves, where the tempo will be way up, and the defense will likely be way down. Far too cheap on all platforms.

Kevin Porter (DS $8,960, DK $4,800, MB $4,800) is a perfect tournament play. His minutes are certainly not guaranteed but he has shown the upside if he gets hot posting a 50-point game just two games ago. On this slate he has a pace up match-up against the Pelicans and will have an opportunity to hit on the high end of his scoring at likely very low ownership.

Markelle Fultz (DS $11,040, DK $5,900, MB $6,000) let’s not go over this again given it will be the third straight preview I have highlighted him. But I will be getting exposure to the Magic given their match-up and both Aaron Gordon and Nikola Vucevic have been priced up quite significantly (while still being decent plays in their own right). Fultz ownership should be limited after his past two games and he has 50-point upside in arguably the best DFS match-up in the NBA right now.

Jarrett Allen (DS $10,490, DK $5,100, MB $5,400) is another tourney only play. He faces the Hawks who have given up the most fantasy points to centres this year. Allen is a total roller coaster ride to roster as we saw with his last three games of 35, 41, 15. It all comes down to minutes and who is playing better out of him and De’Andre Jordan. But the upside and match-up are both there on this slate.

Christian Wood (DS $13,800, DK $7,200, MB $7,700) on a day where the pricing is relatively tight for the premium players I look moving down to Wood who has been extremely consistent recently (not something you generally associate with him). In his last 7 games he has posted just 1 game under 37 points and 4 have been over 40. There shouldn't be much resistance put up from DeAndre Ayton on this slate.

Brandon Ingram (DS $14,930, DK $7,500, MB $8,400) I am very keen to attack the Cavaliers on this slate and you can really look to Ingram or Zion. Ingram appears to have the best micro match-up with Cleveland getting torched by point guards and wings all season. They have conceded the third most fantasy points to small forwards, a trend that has continued over the past 10 games. 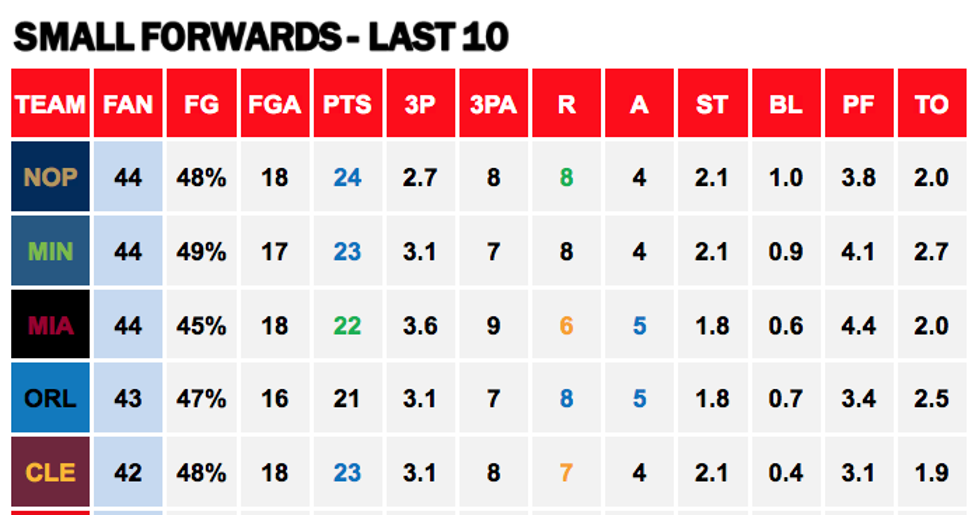 Donovan Mitchell (DS $16,270, DK $8,000, MB $7,300) this is generally too expensive for Donovan Mitchell, however he has been on an absolute tear recently. Posting back to back 50-point outings he now draws the best match-up of that stretch against the Wizards. As noted above the Wizards have been the worst defensive team in the league this season and as a result have given up the most points in the league to shooting guards. Given the pricing of other top players on this slate I have no problem backing in Mitchell for another 50+ point performance in this match up. 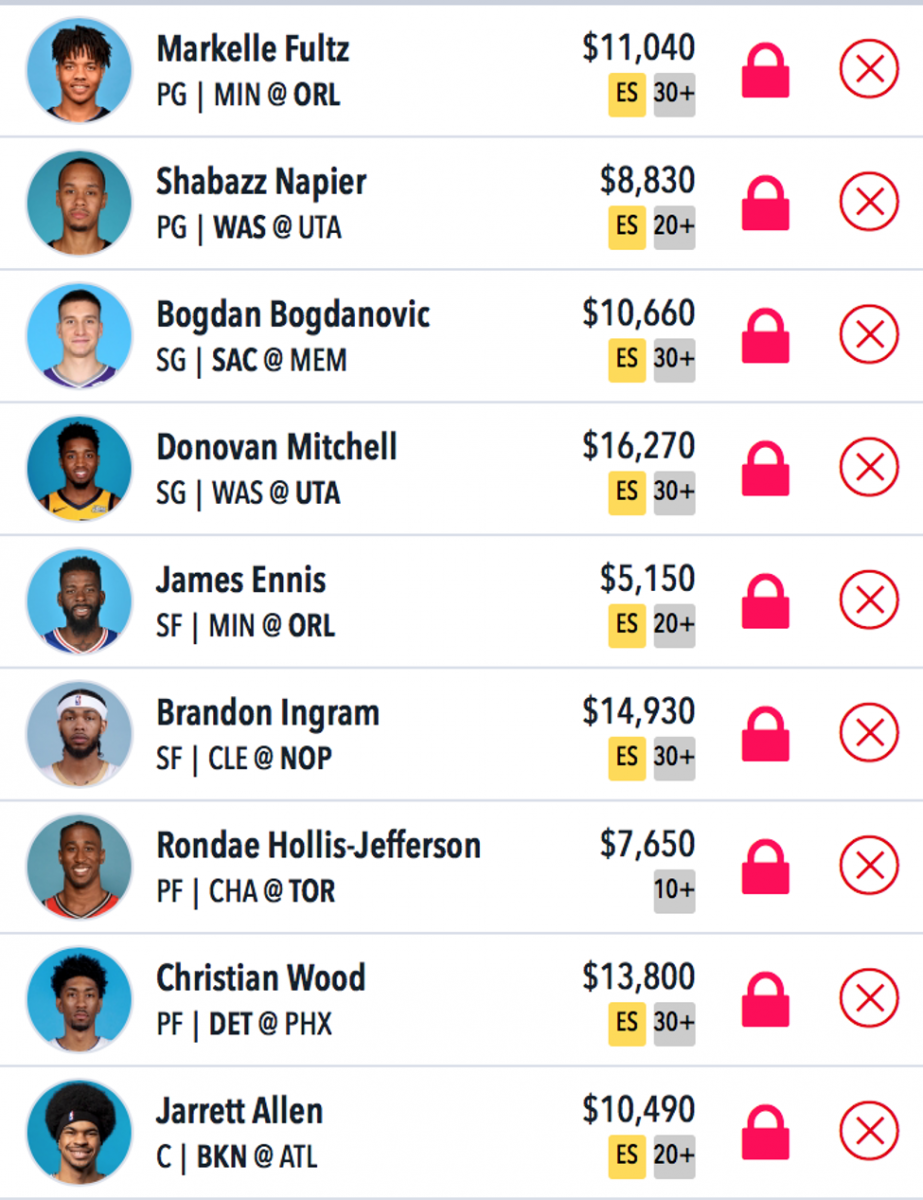