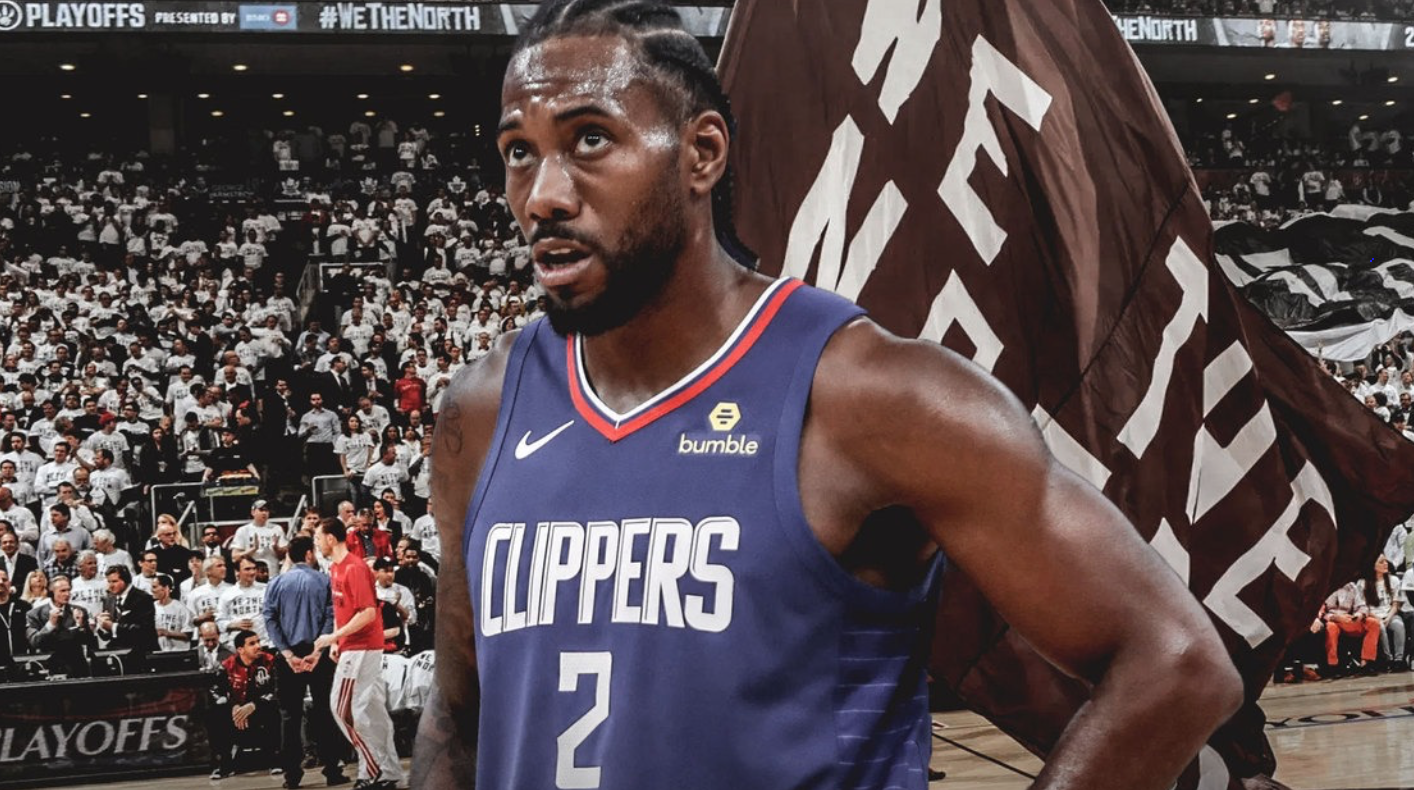 The weekend is here and for NBA Friday (Saturday AEST) we have a massive 10 games slate to play. There are the usual array of massive DFS games across all platforms:

It should come as no surprise that we are still waiting for totals in five of the ten games to as we await lineup and injury news. As usual I have broken down the impact of all possibly major lineup changes below.

Of the games listed there is just the one game topping the 230 point mark and this is the marquee matchup of the day between the LA Clippers and Milwaukee Bucks. These are two of the teams many are predicting to meet in the finals this and daily fantasy aside, should be one of the most anticipated games of the season thus far. It is a pace up matchup for both teams are top 10 in pace with the Bucks playing at the fastest in the league, while the Clippers play at the 7th fastest. On the flip side both sides are also top 10 in defensive efficiency, which has meant both sides are in the bottom half of the league for points conceded.

The Lakers are Trailblazers is the only other game with a total listed that is greater than 220 points. This is an elite matchup for the Lakers as the Trailblazers play at the 9th fastest pace in the league this year while also sporting a bottom 10 defensive efficiency rating.

The Oklahoma City Thunder have the biggest pace up matchup on the slate against the Minnesota Timberwolves who have played at the 4th fastest pace in the league this year. Despite playing at this pace the Wolves are only league average for points conceded and I won’t be necessarily looking to target them on this slate.

Miami I will certainly have a lot of interest in as they face the Washington Wizards who are the triple crown of daily fantasy matchups. They play at the fastest pace, are ranked dead last in defensive efficiency and have conceded the most fantasy points in the league this season. The only real concern will be the blowout as the Heat are favoured by 10 points and the Wizards are playing on the second leg of a back to back.

Marcus Smart is questionable for the game against the Nuggets. Smart missed the last Celtics game, which was the first time he had not played this season. In that matchup it was Jaylen Brown and Jason Tatum who saw the biggest usage increases at 10% and 6% respectively. 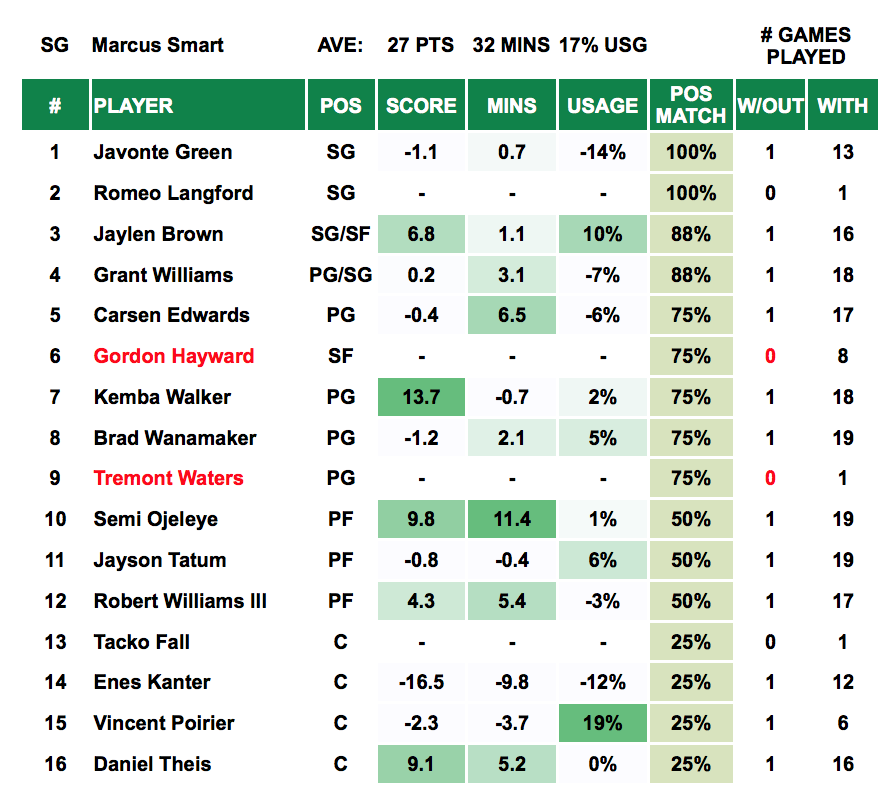 Andrew Wiggins is questionable for the game against the Thunder. In the three games Wiggins has missed this year it has been Jeff Teague who has been the biggest beneficiary averaging +8.3 fantasy points from a 7% increase in usage. Robert Covington has also seen a 6.3 point per game increase from playing an additional 4.6 minutes per game. 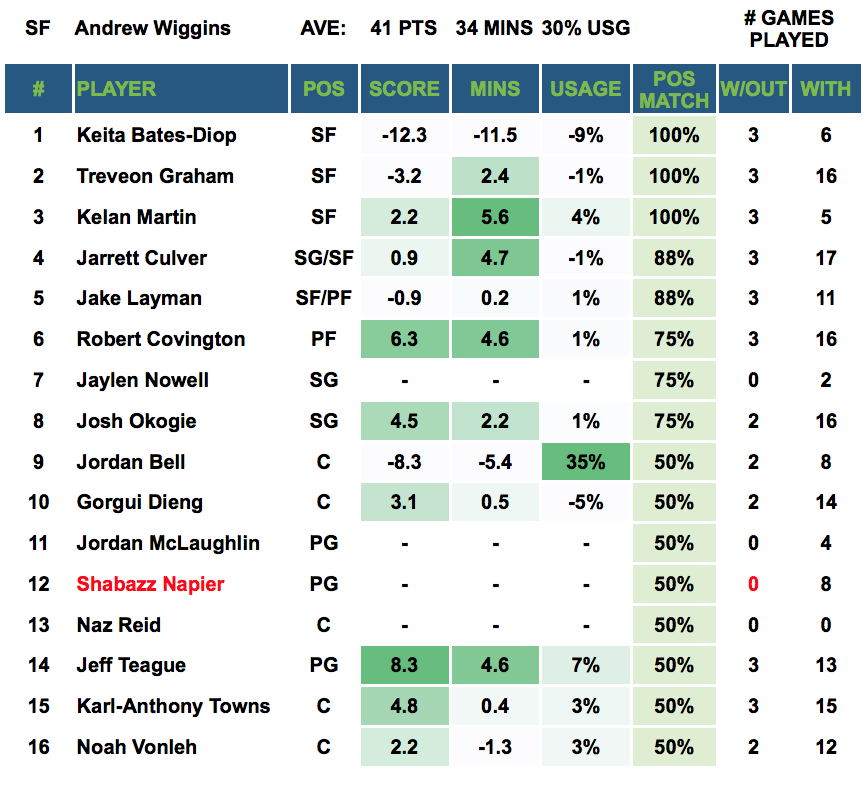 Corey Joseph and Bogdan Bogdanovic are questionable for the game against the Spurs. If both players were to miss this contest Yogi Ferrell would likely move into the starting lineup. Ferrell has averaged 0.80 fantasy points per minute this season. Buddy Heild would also continue to see a massive workload with the possibility of increasing the 39.5 minutes per game he has been playing over the past 5 games.

Lamarcus Aldridge is questionable for the game against the Kings. In the two games Aldridge has missed this season it has been starting centre Jakob Poeltl who has crushed playing an addition 12.6 minutes per game leading to +15.7 fantasy points. Rudy Gay will also likely be in the starting lineup and has seen a 9% usage increase in the games Aldridge has missed, which indicates he will be a strong play despite it not yet translating to additional fantasy points as yet. 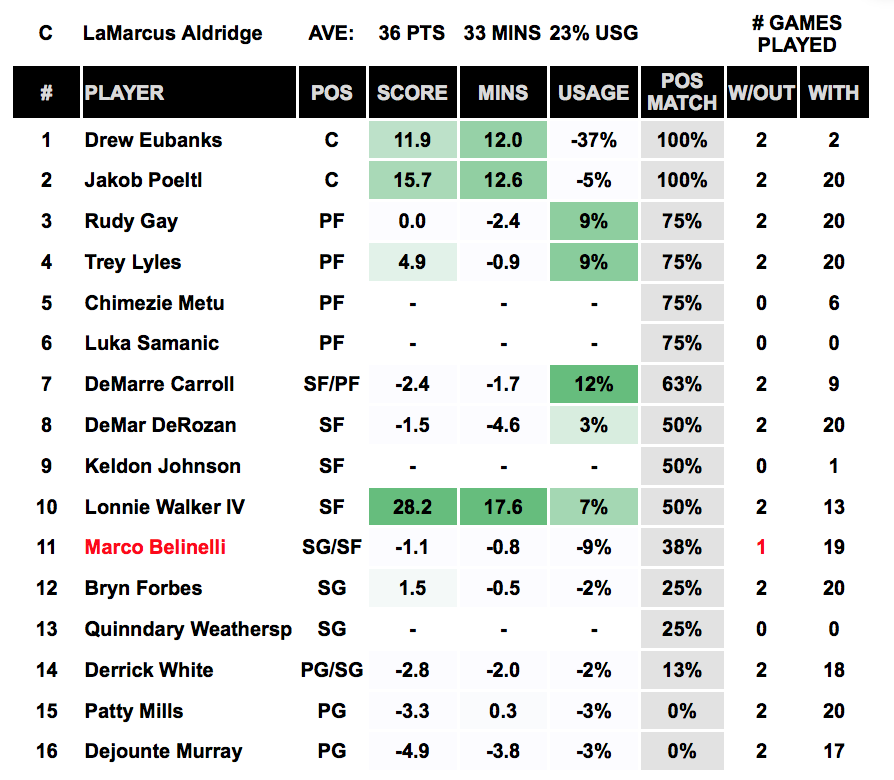 Isaiah Thomas missed today's game with a sore calf and with Washington on the second leg of a back to back on this slate will be a reasonable chance to miss the game against the Heat as well. Ish Smith started in place of Thomas and poured in 33 fantasy points from 34 minutes of playing time.

In addition to the possible plays noted (Yogi Ferrall, Ish Smith, Jacob Poeltl) above, the current value players to consider include:

Rajon Rondo (MB $4,600, DS $9,400, DK $5,300) has steadily seen his minutes rising, culminating in last game where he played 32 minutes in a blowout against Utah and returned his biggest output for the season with a massive 48 fantasy points. With the way the Lakers are playing a blowout is in play on any given slate, which could mean extra time for Rondo. His price stands out significantly on Moneyball and is worth a shot in GPPs there are as he faces Portland who have given up the 3rd most fantasy points to point guards this season. It is also worth noting that is a national TV game, which means we get national TV Rondo!

Stack them up, or flip a coin, but the Heat players will be in play across every position on this slate. As noted above they have the best fantasy matchup in the league against the Wizards who are giving up the most fantasy points in the league this year. To make things better the Heat are short handed with Goran Dragic out and the possibility of Justice Winslow also missing the game, resulting in a significantly increased workload at the wing and point guard positions. Each player is much harder to play at Drafstars where there are better point per dollar plays, but at the other two platforms I love Kendrick Nunn for cash games as his minutes should be the safest, while Robinson and Olynyk look perfect for upside in GPPs.

Mortiz Wagner (MB $5,100, DS $8,460, DK $5,000) on the other side of the ball in the Heath Wizards matchup is a team that is without their starting centre for a long period of time. This leave Mortiz Wagner to man the centre position. Wagner has already shown 40+ point upside off the bench this season, and while the Heat is not the best matchup the role is hard to ignore. Wagner played centre today in another tough matchup against Philadelphia and returned 22 fantasy points, which is effectively his floor in this position.

Jarrett Allen (MB $7,100, DS $14,650, DK $7,200) is really starting to take full advantage of his potential this season. Averaging 42 fantasy points per game over his past 5 contests in just 28 minutes of playing (1.5 fantasy points per minute). He looks to be splitting less of the time with DeAndre Jordan and on this slate he draws another elite matchup against Charlotte who have given up the second most fantasy points to centres over the past 10 games and the third most rebounds to the position this season. 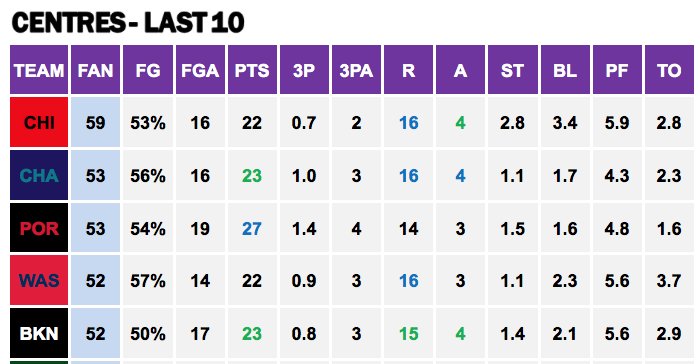 More Miami with the matchup against Washington. I have already broken down all the reasons to attack this matchup above. More specifically with the Heat being without Dragic, and possibly Winslow, Butler assumes the role of the point guard on this team. In the past two games he has averaged 58 fantasy points in two tough matchups playing this role.

Bam Adebayo draws one of the best matchups at his position as shown above, but this is even better now that he will be facing the Wizards centre by committee of Wagner, Rui and Mahinmi. He has simply too cheap on Draftstars and DraftKings and he has already shown 50 point upside on multiple occasions this season.

Kawhi Leonard (MB $10,200, DS $16,680, DK $8,400) is priced at about as cheap as you will see him at Draftstars and DraftKings. While he faces the Bucks who are the top defensive team in the league, we have seen in the playoffs last year that they have no real answer to slow Leonard down. The game is the highest total on the board currently at over 230 points, and it will be a pace up game for the Clippers. These marquee matchups often bring the best out of the star players and I would expect Leonard to have a floor of 40 points in this matchup that will bring ceiling potential from all the stars.

Anthony Davis (MB $10,800, DS $20,320, DK $9,600) going back to the well here, particularly on DraftKings. Davis once again draws an elite matchup going against the Portland Trailblazers and Carmelo Anthony defense. They have given up the 5th most points to power forwards over the last 10 games and anchoring the defense behind Melo and Hassan Whiteside. Last game Davis was on a rampage with 43 fantasy points from 26 minutes before sitting out due the game blowing out late. If this game can stay close, and it has a line of just 3.5 currently, Davis should have no problem going for 50+. 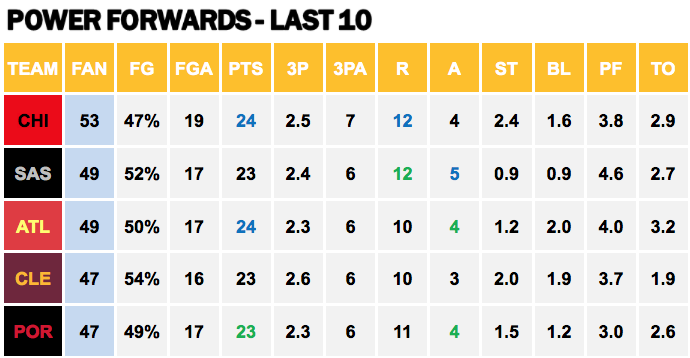 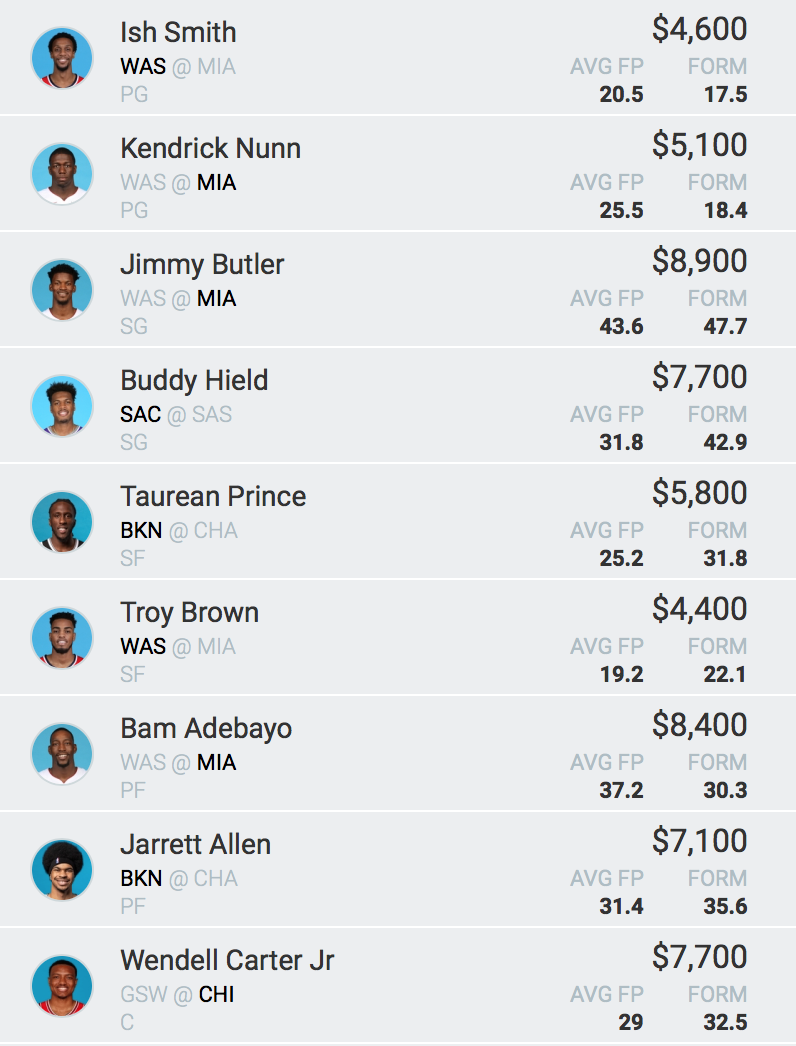