NBA Wednesday (Thursday AEST) brings a classic 6 game slate to play. It has been a interesting DFS week already so hopefully some regular action returns. The usual major daily fantasy tournaments on offer across the platforms:

Arrrrrrrrrrrgggg! My eyes are bleeding looking at that with just 2 game totals listed so far. As usual I break down all the major injury news and the impact for daily fantasy on this slate below.

The major positive is the two games listed are both totals topping the 230 point mark. The highest being New Orleans at Sacramento at 235 points. The Pelicans are playing at a blistering pace right now, currently sitting second fastest on the season and fastest over the past 5 games. They are bottom 10 in defensive efficiency and top 10 for fantasy points conceded, which has made them a juicy team to target all season. All this leads to the Sacramento Kings having an implied total +7.9 points above their season average.

New York at Atlanta is the next total listed, sitting at an attractive 230 points. The Hawks have been the benchmark for DFS teams to target all season. Playing at the 7th fastest pace in the league while sitting 28th in defensive efficiency has led them to concede the most fantasy points in the league. The Knicks are also a bottom 10 team defensively and sit around league average for fantasy points conceded, which means I have no issues stacking this game up from both sides.

Things get a bit dismal after these two games from a matchup point of view as not other teams on this slate have a pace-up matchup, which means it will be more about finding lineup value and delving into the micro matchups.

Brandon Knight and Bruce Brown are both questionable for the game against Philadelphia. There won’t be a lot of data to analyse these two being out given the movement in the Pistons roster in recent months. However, Brandon Knight has essentially been the starting point guard recently, while when Brown returns he will likely assume that role. If both players are out in this matchup it should open up more minutes for Langston Galloway (19.6 points per game over last four) and Jordan McRae (over 1 fantasy point per minute this season).

Jimmy Butler and Kendrick Nunn did not practice this week. These two players effectively handle the majority of the play making responsibilities for the Heat on the starting unit. I’d expect Goran Dragic to move into the starting lineup if they are both out, while even if just Butler is out he should see a boost as he has posted +6.8 fantasy points per game this season in the 10 games he has played without him in the lineup. 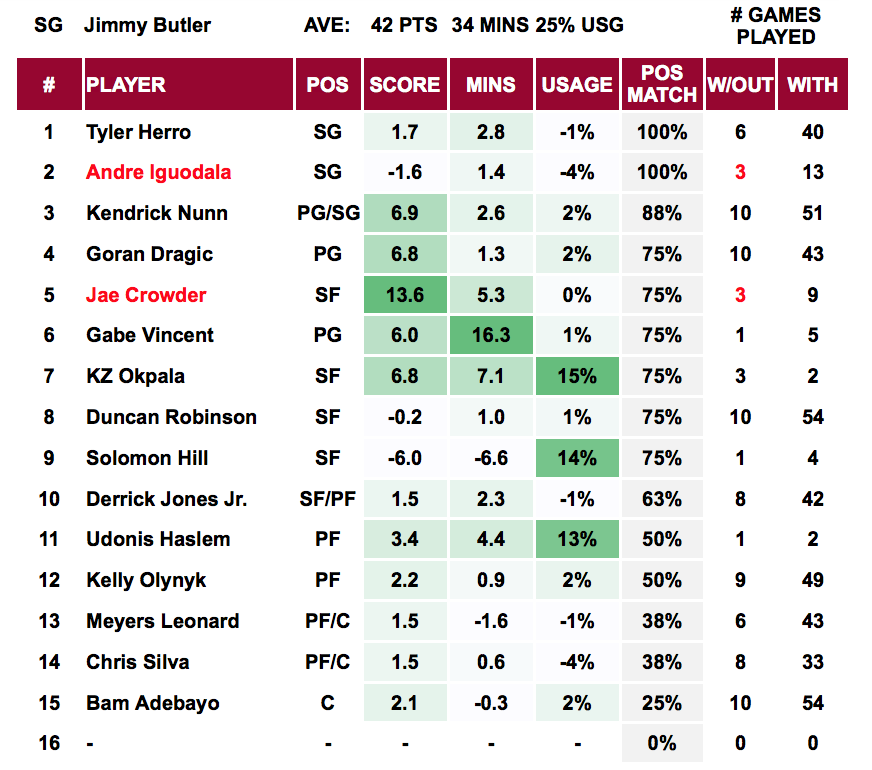 Josh Richardson will return for the game against Detroit, while Joel Embiid is questionable. Keeping an eye on the news in regards to these two for minutes limits is going to be crucial. However, their return should mark the end of Al Horford and Tobias Harris chalk nights, and will also significantly impact Shake Milton.

Derrick Jones (DS $6,850, DK $4,000, MB $4,400) is starting currently and saw a boost last game with Jimmy Butler not playing a full allotment of minutes due to a toe injury. This resulted in 31 minutes and 26 fantasy points. He has shown 30-40 point upside this season when he gets the opportunity and the Hornets have been getting killed by rebounders all season, and that is the category that often drives a successful game for Jones. He makes for a nice salary relife option if no obvious value opens up.

Devonte Graham (DS $13,280, DK $7,000, MB $6,400) looks like solid value at his price point on Draftstars. He has well and truly bounced back from injury to now posting three straight games of 34+, including a massive 58.5 in his last game (admittedly in overtime vs Atlanta). Miami isn’t typically a matchup to target, but if Butler is out I feel comfortable their perimeter defense drops off enough and I love players who can get me 40+ regularly in this price range (especially on a smallish slate).

Julius Randle (DS $14,860, DK $7,800, MB $7,600) totally burnt me and lots of others today laying an absolute egg against the Wizards all while getting dragged on multiple occasions. That said, DFS is all about hopping back on the wagon and his ownership should take a dive after the performance. Beware of late season coaching impacting his minutes, however, so I would make this a purely GPP play. But before today he had been on a run of ⅞ games posting 38+ fantasy points. On this slate he draws arguably the best matchup in the league against the Hawks who have conceded the most fantasy points in the NBA this year.

De'Aaron Fox (DS $15,180, DK $7,800, MB $8,200)... we need exposure to the Kings in this matchup and Fox is the safest bet for mine. He has been solid as rock with 9 of his last 10 games posting 35+ fantasy points. On this slate he draws what has been an elite matchup for his position all season with the Pelicans giving up the 6th most points to point guards, a trend that has continued through the past 10 games: 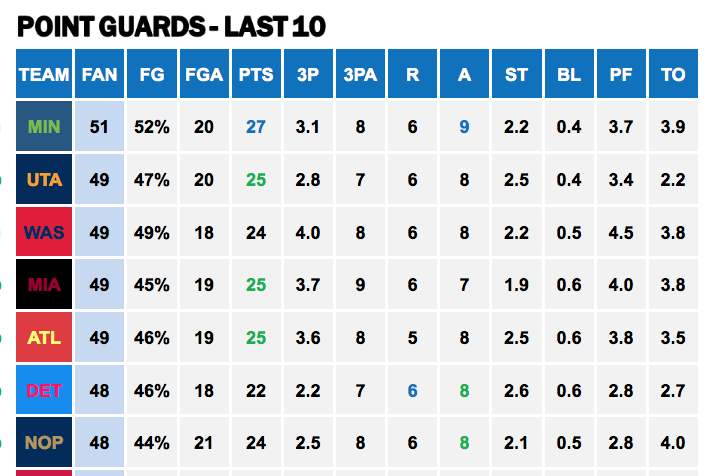 Bam Adebayo (DS $15,750, DK $9,000, MB $8,400).... centres vs Charlotte. It has been a thing all year and on this slate we can't take advantage with Bam. He has 60+ upside and with the Hornets conceding the 4th most rebounds to centres this year he should be in a position to smash his average of 10.6 per game. If Butler was to sit on this slate, it would likely result in more of the play making going through Adebayo as well, with Bam averaging a massive 5 assists per game this season. 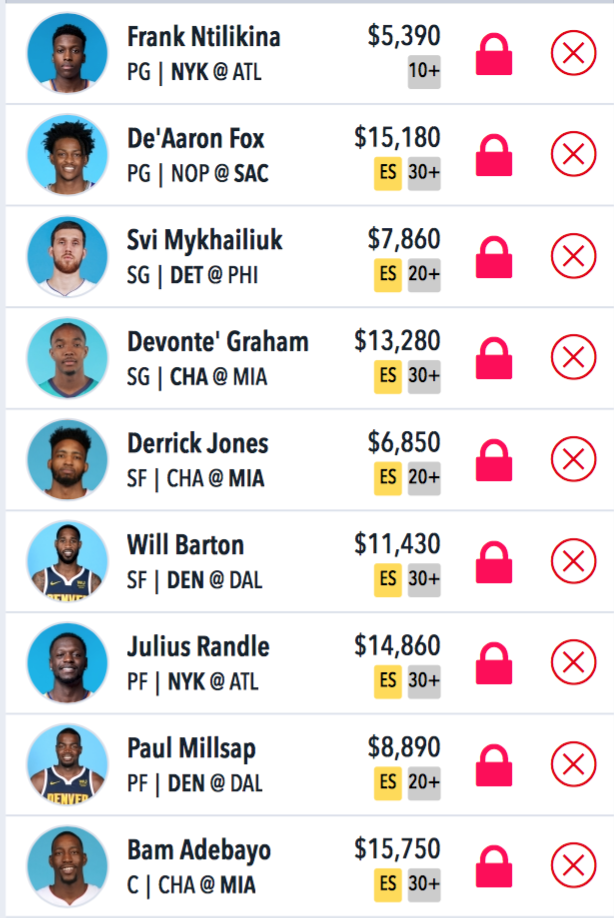