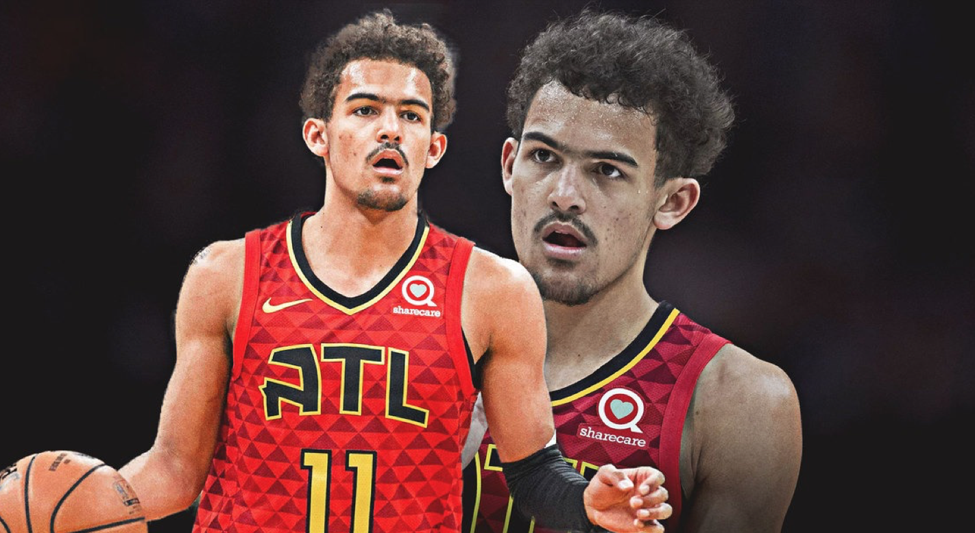 Our last major NBA daily fantasy slate is here before we hit the All Star break. If you have been on the grind all season you probably need the break as much as some of the players. NBA Wednesday (Thursday AEST) brings a huge 11 game slate to attack. The usual major daily fantasy tournaments on offer across the platforms: 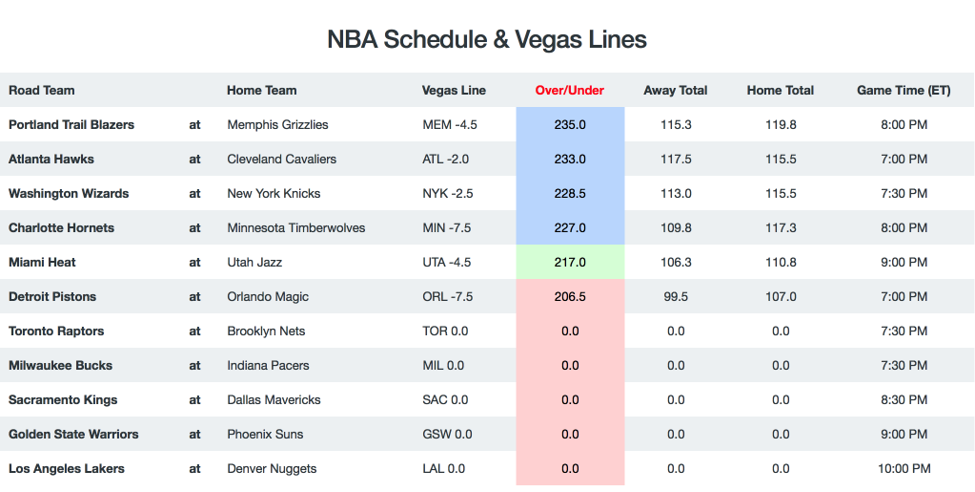 Just the five games without a total yet is a solid result for a slate of this size. As always I break down the major fantasy impact of the injury and lineup news below.

There are several juicy game totals amongst this slate with 4 games listed currently at 227 points or higher. The best part is that three of them have lines of 4.5 or under. The top game is Portland at Memphis, which has a whopping 235 point total. Memphis get a massive +6.7 points on their implied total compared to their season average making them one of the top teams to target on the day. Both sides are in a pace up match-up, with the Grizzlies playing at the 4th fastest pace this season and Trailblazers 11th. Portland has been one of the worst defensive teams in the league, currently ranked 27th in defensive efficiency and both sides are top 7 for most fantasy points conceded. This will be a great option for a game stack.

Atlanta at Cleveland is not far behind with a 233 point total. It is a massive pace up spot for the Cavaliers who have played at a slow pace this season, as they face leagues 7th fastest team in the Hawks. Both sides are an abomination defensively with Cleveland ranked 29th and Atlanta 28th in defensive efficiency. This has all led to giving up plenty of fantasy points, with Atlanta leading the way, while Cleveland is not far behind at the 3rd highest mark in the league this season.

The next game in the trio of headliners that I will be looking to attack is Washington at New York. With a total of 228.5 points the Knicks take on one of the best daily fantasy opponents in the league this season against the Wizards who have played at the 5th fastest pace, ranked dead last in defensive efficiency and conceded the 2nd most fantasy points.

The two sides we didn't touch on above that are worth looking into on this slate are Indiana and Charlotte. They have the biggest pace up match ups on the slate with the Pacers taking on the Bucks (1st in pace), and the Hornets taking on the Timberwolves (6th in pace). Charlotte is particularly interesting, as the Wolves have been in total shoot outs over the past two games since the trade deadline. They lost defense in Robert Covington and added offensive minded players. The Hornets players are likely to be under owned in this match up.

Kevin Love is questionable for the game against Atlanta. There has been a change in dynamics with the Cavaliers with Andre Drummond being acquired by trade before the deadline. This means that although Larry Nance would likely start in Love’s place and has picked up +7 minutes per game this season without Love in the lineup, there is some uncertainty whether that will continue. Keep an eye on the news as to who starts. 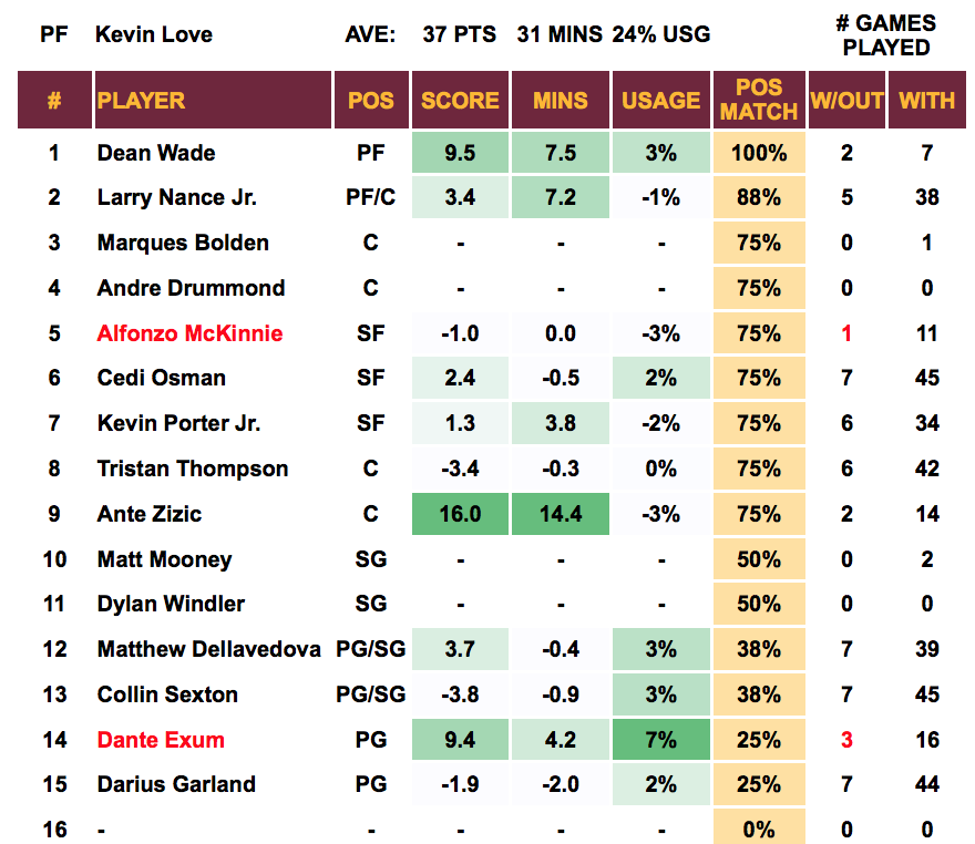 Giannis Antetokounmpo is out for the game against the Pacers. We covered this two slates ago, when Giannis is out just lock in Eric Bledsoe (+23 fantasy points), Kris Middleton (+15 fantasy points) and Ersan Ilyasova (+22 fantasy points) and watch the money pile in. There really isn't much more to say, the price has crept up on DraftKings, which does give me pause, but on platforms where it hasn't it is lock and load and move on. 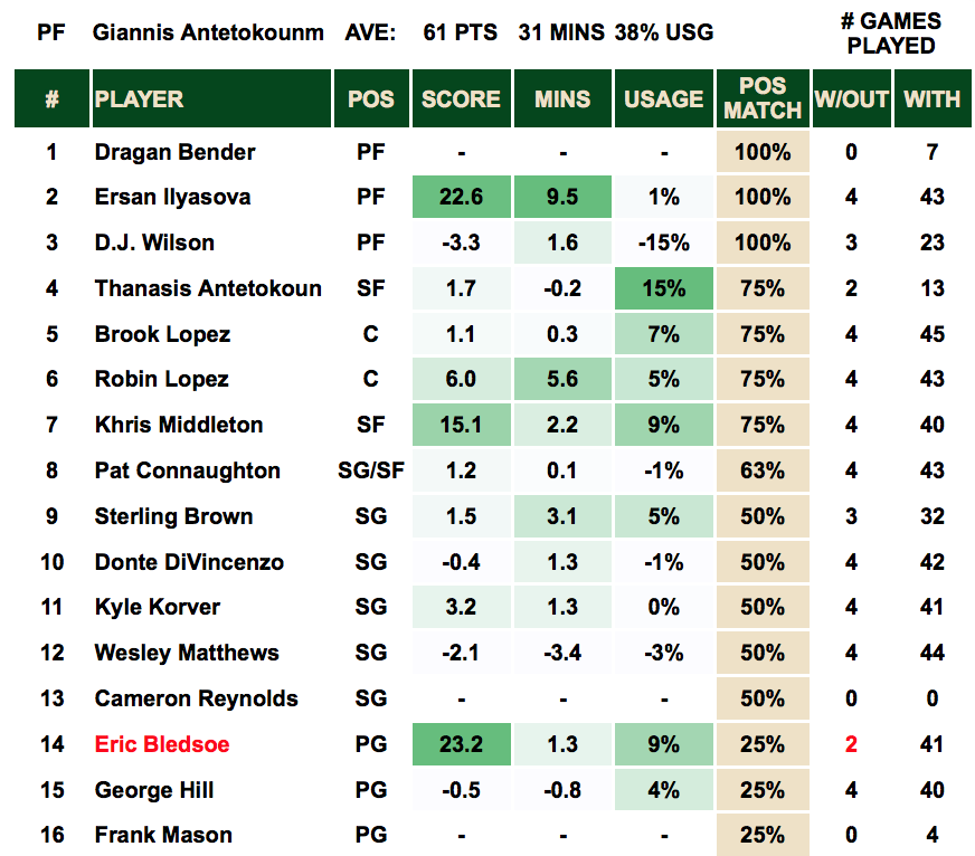 Deandre Ayton is questionable for the game against the Warriors. If Ayton is out again the Suns are essentially down to just one remaining centre available to play, Cheick Diallo. He played a massive 39 minutes last game and returned 25 fantasy points. Mikal Bridges is also soaking up significant minutes as the Suns are down to the absolute bare bones of players with height.

Marc Gasol will not play and Serge Ibaka is questionable for the game against the Nets. If both are out again, we will need to wait for the news on the starters as really who can trust Nick Nurse with anything. Last game, rather than going with Chris Boucher in the starting lineup, the Raptors went small and started Richard Hollis-Jefferson. He is a fantasy point per minute player, so anytime he is in line to get 30+ minutes he pretty much a lock and load play.

Mike Conley is questionable for the game against the Heat. This season in the 20 games Conley has missed it has been Joe Ingles who draws the biggest benefit. He has averaged +10 fantasy points per game in these matches as a result of playing an additional 4 minutes and seeing a usage rate spike of 5%. He essentially takes over as a de facto point guard without Conley and thrives fantasy wise in these situations. 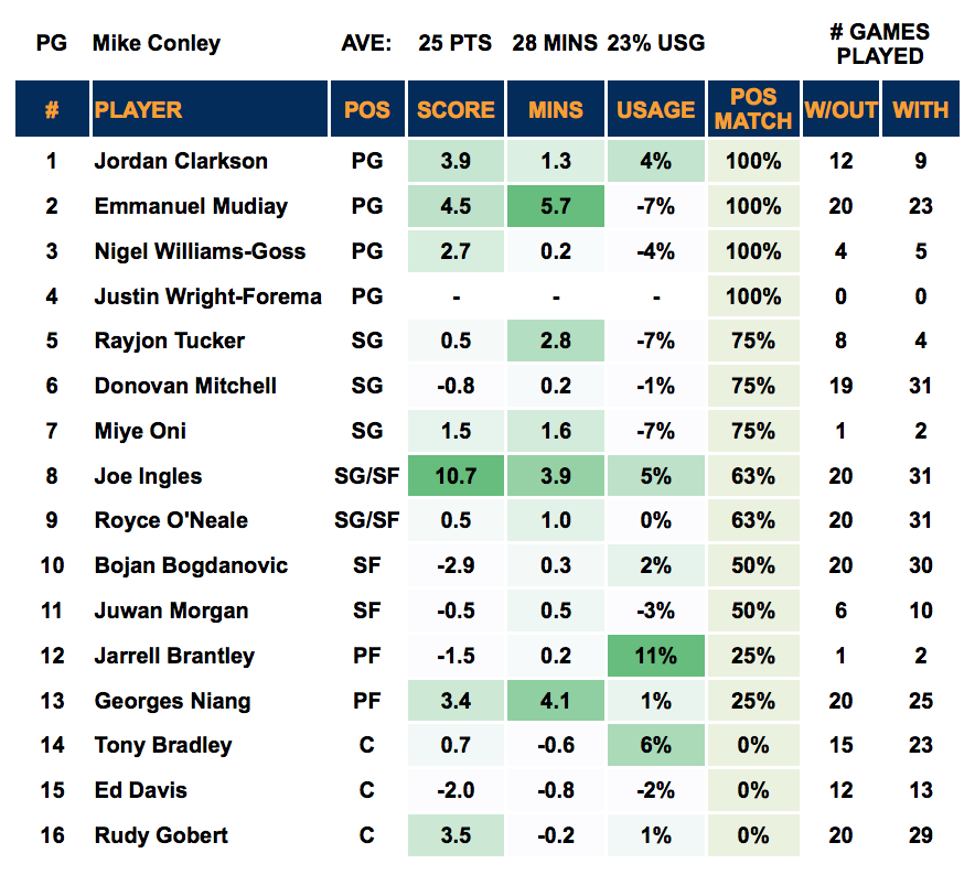 Juancho Hernangomez (DS $6,560, DK $3,900, MB $4,100) for some reason has yet to see any major price boost despite moving into the starting lineup for the Timberwolves post trade. In two games with the new team he has averaged over 26 minutes per game and returned 23+ fantasy points. He draws an elite match up in this game with Charlotte giving up the fourth most points in the league to power forwards. If there isn’t a lot of obvious value by the time the slate comes around, Juancho is a very safe way to safe money.

OG Anunoby (DS $8,370, DK $5,200, MB $4,400) is the definition of GPP play. His ownership will likely be too heavy on this slate after he exploded for a season high 56 fantasy points last game. But anytime you can get a player at this price point with 40+ point upside (which he has shown multiple times this year) it is a great tournament option. It is a pace up match up against the Nets on this slate, which will suit Anunoby’s game style.

Ja Morant (DS $11,960, DK $7,500, MB $6,500) is my first stop in the Grizzlies vs Trail Blazers fantasy jambalaya. Still priced too cheap on Draftstars after his 62 fantasy points and first career triple double last game. Portland has given up the second most fantasy points to point guards this season.

Eric Bledsoe (DS $12,820, DK $7,700, MB $7,000) hasn't seen much of a price increase on Draftstars despite posting a massive 52 fantasy points last game with Giannis out of the lineup. As we noted above he is averaging a ridiculous +23 fantasy points per game in 2 games without the Freak this season. The Pacers are not as good of a match up as last game, however with a  9% usage increase the price will be too hard to pass up.

Julius Randle (DS $15,390, DK $8,600, MB $8,500) having exposure to Knicks against the Wizards will be a must for me, and my first stop will be with Randle. He has really turned his season around after struggling with his role and playing time early on. Over the past 5 games he is averaging 45 fantasy points and he showed his ceiling last game with a 60+ point performance. The opportunity to hit that again is here on this slate with the Wizards conceding the second most fantasy points in the league this season.

Kris Middleton (DS $16,880, DK $8,800, MB $7,700) This is by no means a certainty on DraftKings with the price at just under $9K. However, on Draftstars I will be locking in plenty of Middleton. He is averaging an insane 32 points, 9 rebounds and 6 assists per 36 minutes in games without Giannis this season. Last game we saw him put in a 57 fantasy point night (which backed up the 70+ point night last time Giannis was out). He has quite simply been in career best form, posting just 3 games under 40 fantasy points from his last 10 games.

Trae Young (DS $19,510, DK $10,400, MB $9,800) has the absolute nuts match up on this slate for his position. The Cavaliers have been getting totally destroyed by guards all season, conceding the most fantasy points to point guards, and the most over the past 10 games. We all know Trae brings a 70-80 points ceiling and this is legitimately a game where that is in play. 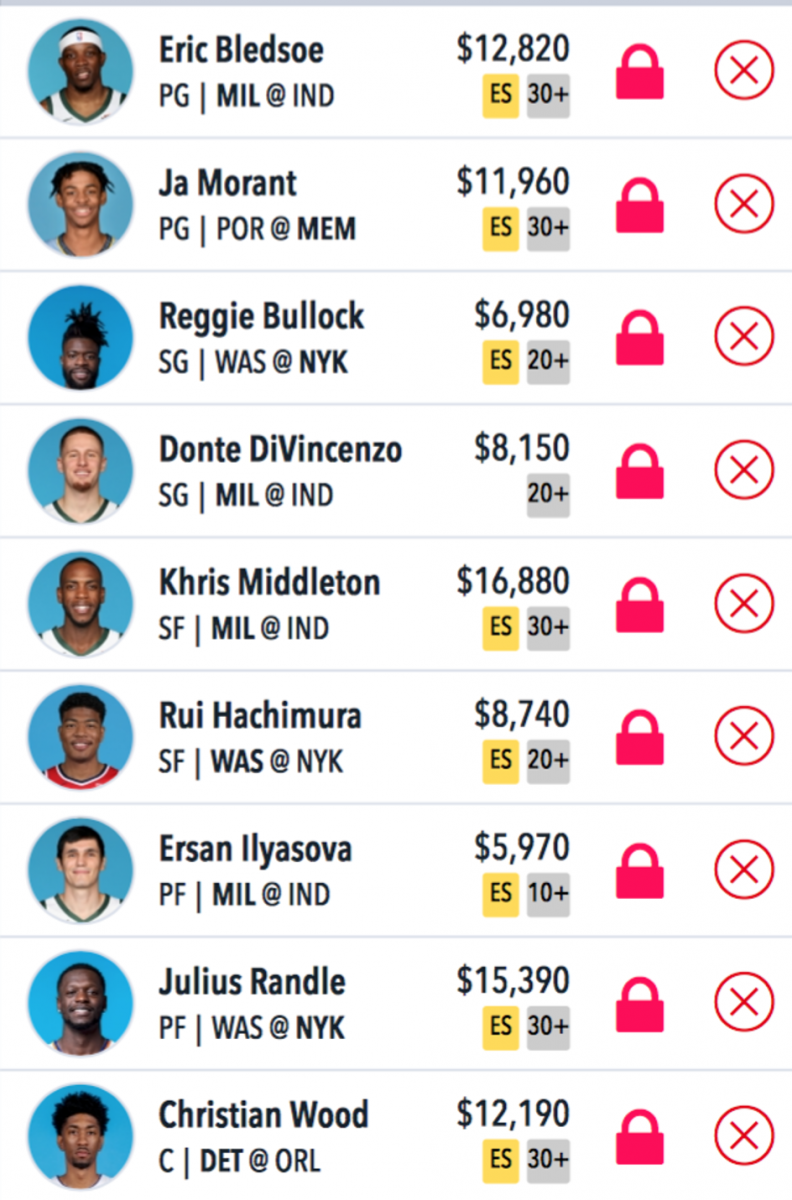