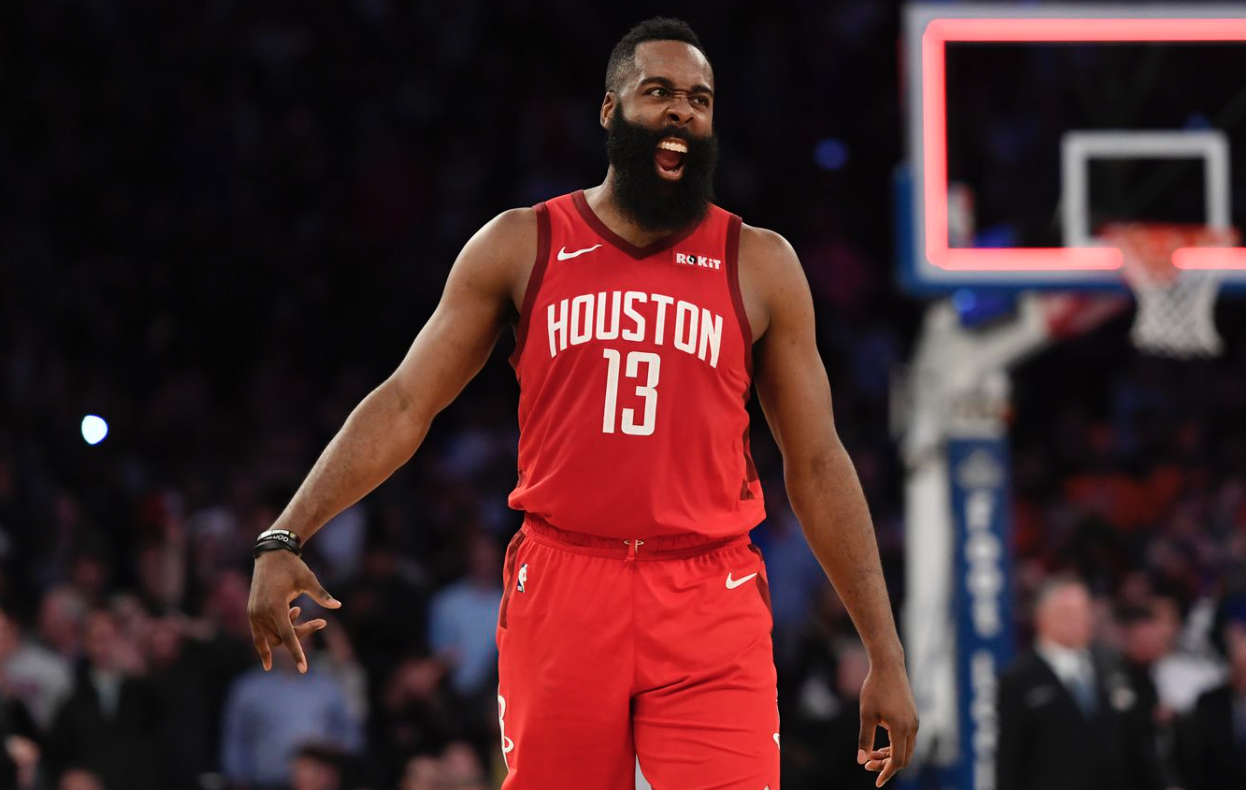 Another week of NBA action kicks off with NBA Monday (Tuesday AEST) delivering us with a perfectly sized 6 game slate to break down. The usual array of daily fantasy tournaments are on offer across the major platforms:

This year's dream matchup for NBA DFS is on this slate with Houston playing at New Orleans. This matchup is sporting a ridiculous 242.5 game total and even better is expected to stay relatively close throughout the game with a 4.5 point line. Both teams are top 4 in pace this year, while also being bottom 10 in defensive efficiency. This is the number one game on the slate to stack and rack every which way and you can bet any DFS player worth their salt will be doing the same thing.

There are two games without a line and total set at this stage in Minnesota at Detroit and Toronto at the LA Clippers as we awaiting injury news. I have broken down the major impact of all lineup news below.

Minnesota are playing at the fastest pace in the league so far this year, which will put the Pistons in a pace up matchup. Despite this the Timberwolves are only 11th in fantasy points conceded.

Utah also have an elite matchup on this slate against the Santa Cruz Warriors who have the worst defensive efficiency in the league this year, while also conceding the second most fantasy points. The Jazz will also be playing up in pace. The only concern in this game is the blowout risk given the 10 point line.

Gordon Hayward is out with a fractured hand. Hayward has been back to his career best form this season averaging 36 fantasy points from 31 minutes and 23% usage rate. This injury will leave plenty of extra opportunity for other Celtics players. In their last game where Hayward got hurt he played just 15 minutes and Kemba Walker (50 fantasy points), Jason Tatum (39 fantasy points) and Jaylen Brown (45 fantasy points) all saw added production. Marcus Smart will also likely fill the starting role and see a 30+ minutes of playing time.

Blake Griffin, Derrick Rose and Tim Frazier are all expected to return for the match against Minnesota. Blake Griffin had 30% usage rate while playing 35 minutes per game last year, while Rose has been playing 25 minutes with an insane 35% usage rate this season. What does all this mean? Well if they all return as expected the Andre Drummond, Luke Kennard and Bruce Brown parties are over. They will all a decline in usage from the past few games and will generally be over priced for their future production level. I suggest a hard fade on Pistons until things settle back into routine.

Lonzo Ball will not play against the Houston Rockets. Ball missed his first game of the season last match against the Charlotte Hornets. In this contest the Pelicans went to injected JJ Reddick, Kenrich Williams and Derrick Favours into the starting lineup. As you can see in our player out tool each player significantly outperformed their season average in minutes and fantasy points: 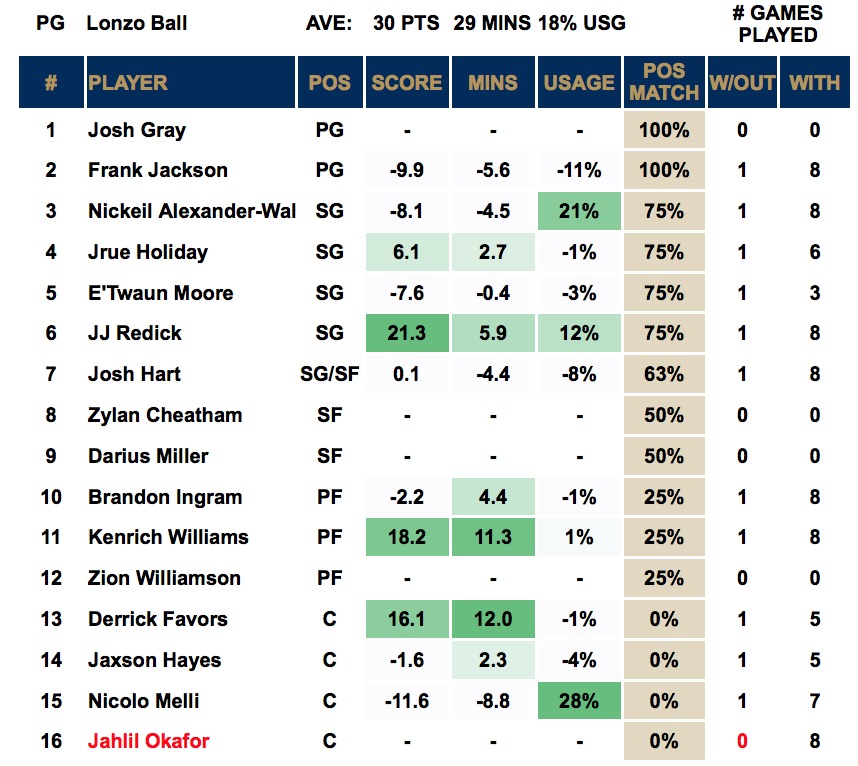 Kyle Lowry and Serge Ibaka are both out for a period of time and will not play against the LA Clippers. The Raptors played their first game today without the two and it was Fred VanVleet who saw the biggest bump in usage rate of the starters at +6%, which resulted in +18.6 fantasy points. Norman Powell was moved into the starting lineup and while he outperformed his season average by 10 fantasy points he only played an extra 1.8 minutes. The sneaky play was Chirs Boucher who took over Serge’s role off the bench and posted +22 fantasy points from an addition 18 minutes of playing time. 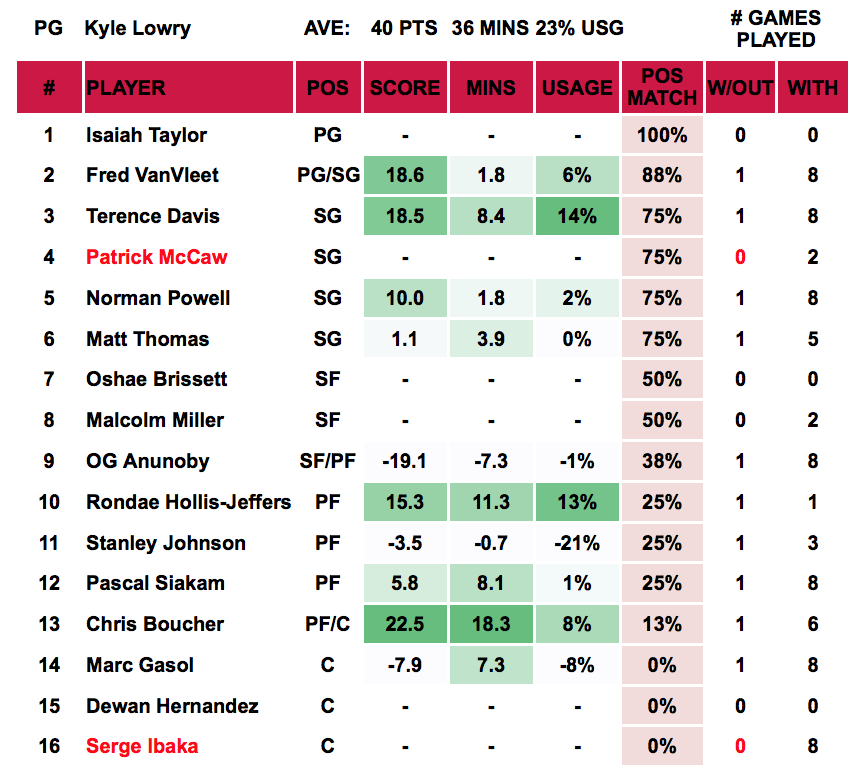 Chris Boucher (MB $4,400, DS $5,000, DK $3,400) as mentioned above, his price hasn’t had much of a chance to move after playing in the late game today. He has shown himself to be a fantasy point per minute monster averaging over 1.2 this season and didn't disappoint when he got his opportunity against the Lakers playing 24 minutes on his way to 29 fantasy points.

Kenrich Williams (MB $3,800, DS $6,080, DK $4,300) is another mentioned above and he is just far too cheap on both Moneyball and Draftstars. Williams has averaged just under 1 fantasy point per minute in his 18 minutes per game this season and he received 28 minutes of game time as the starter last match en route to 33 fantasy points. On this slate he draws one of the best matchups in the league against Houston who have given up the most fantasy points in the league this year.

Derrick Favors (MB $4,900, DS $7,700, DK $4,700) quite simply has to be mentioned after start last game and his highest allotment of minutes all season with 29. He finally displayed what most of us were expecting heading into the season as the starting centre notching up 32 fantasy points. If this is an indication that Favors will now feature heavily in the rotation he is still severely under priced for a player that consistently averages right on the 1 fantasy point per minute mark. My only hesitation is trying to bank one Alvin Gentry’s big man rotations is akin to spinning the wheel of fortune, and despite the fact Houston are an elite matchup they do love to play small with Tucker at the five which might limit Favors playing time.

Lou Williams (MB $6,900, DS $12,430, DK $7,100) price has barely budged despite putting up 46 and 58 fantasy points in his last two games. Quite simply Lou isn't just an elite bench player, but rather one of the top offensive players in the entire NBA period! He has maintained a 30% usage rate this season despite the acquisition of Kawhi Leonard and while the Raptors are not a plus matchup, it should be a hotly contested game, which often suits stars.

Jaylen Brown (MB $6,500, DS $11,210, DK $6,300) appears to have picked up where he left off two seasons ago as one of the key contributors on a Celtics team that made it all the way to game 7 of the Eastern Conference Finals. As noted above without Hayward in the lineup his usage will pickup as we saw last game where he went for 30 actual points and 45 fantasy points. He will also get an elite matchup for his position against Dallas who have given up the equal most points in the league to small forwards this year.

Donovan Mitchell (MB $8,300, DS $15,680, DK $7,300) / Bojan Bogdanovic (MB $6,100, DS $12,290, DK $6,200) … I will definitely want some exposure to the Utah Jazz on this slate as they take on the Golden State Warriors who have leaked the third most fantasy points in the league this season. Mitchell is too cheap on Draftkings for a player averaging 40 fantasy points per game this year, which 60 point upside. Whole if you can’t quite squeeze him in then Utah’s off season acquisition Bojan is sitting there staring at me. He has been as steady as they come as a final piece to your team this year, while his upside isn't quite there you can almost lock in 30 fantasy points and move on. He also has the added benefit that the Warriors have given up the second most three pointers in the league this year.

James Harden (MB $11,500, DS $23,800, DK $11,500)... you will be a brave player to fade Harden on this slate. The beard has returned to last seasons form after a rocky shooting start to the year posting 70+ fantasy points in the last three games and four of the last six. The addition of Russell Westbrook has done nothing to impact his usage rate going at an incredible 39% so far this year. On this slate he has one of the top matchups in the league as I have hammered home already above, with the Pelicans giving up the equal second most points to shooting guards this year.

Brandon Ingram (MB $8,800, DS $15,470, DK $7,800) is where I want my expensive exposure to the Pelicans side of this game. Having a legit break out season averaging 44 fantasy points with a 28% usage rate he has been one of the few bright spots to the Pelicans this season. Absolutely love his price on DraftKings, but happy to play him across all three platforms. We highlighted above Houston have given up the equal most fantasy points in the league this season to small forwards. 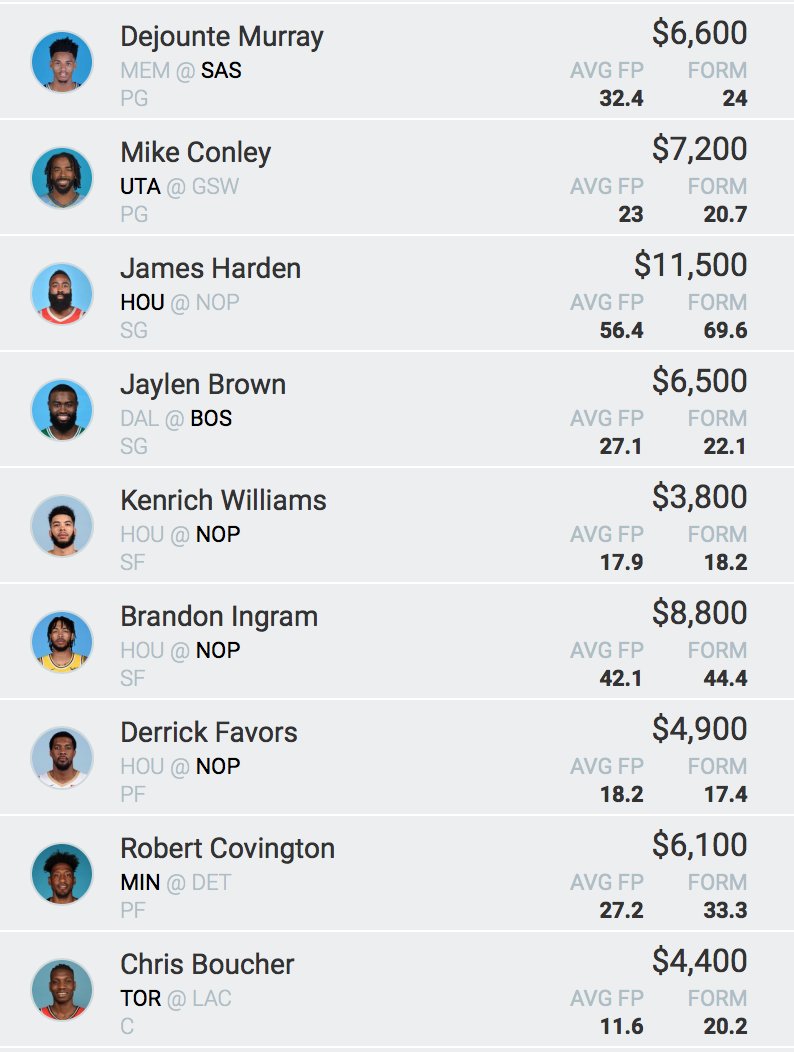