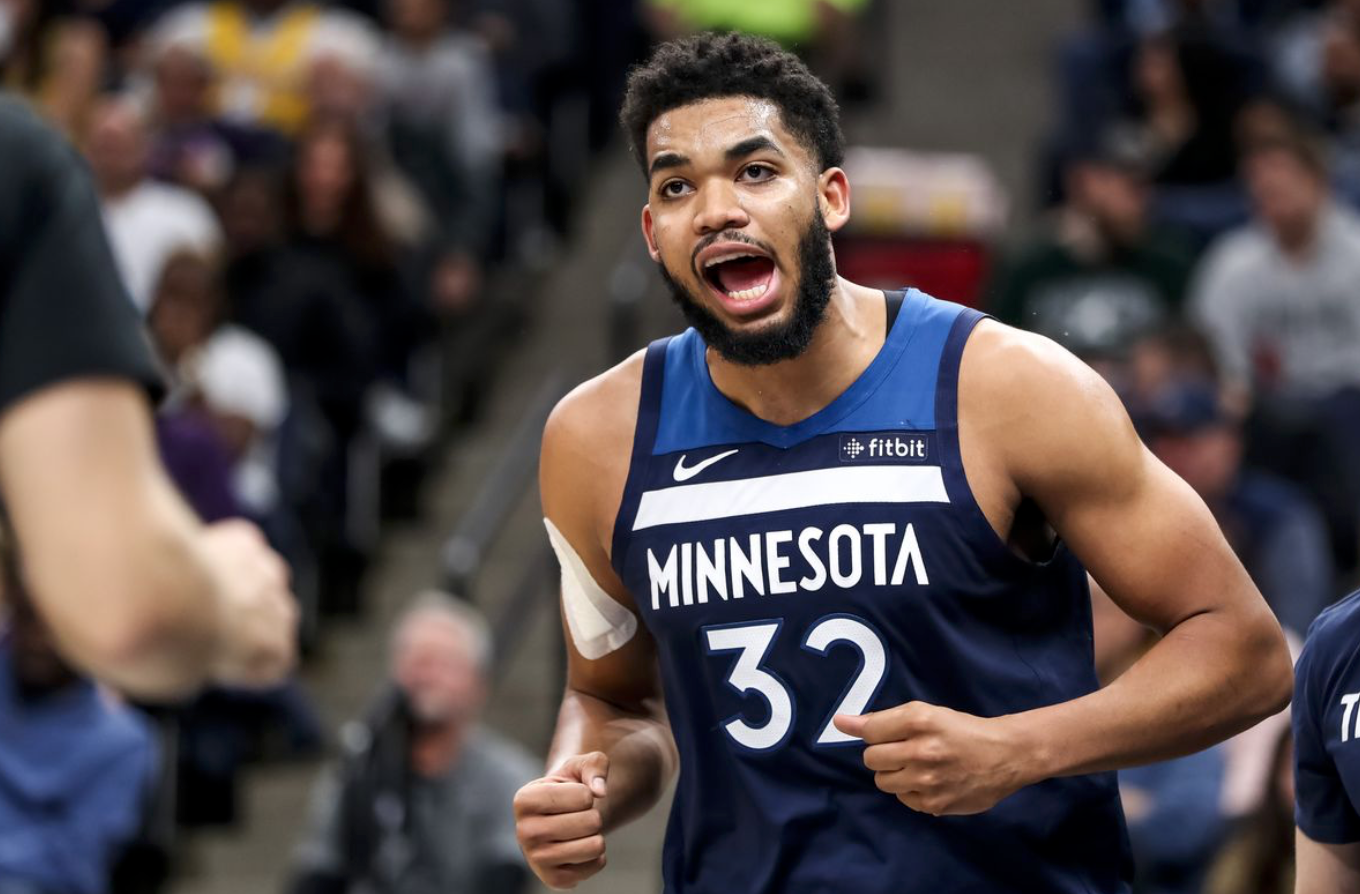 Time to kick off another week of NBA action. There are some monster slates this week beginning with NBA Monday (Tuesday AEST) and a huge 11 game slate to play. There are the usual array of major daily fantasy contests to choose from across each of the major platforms:

Just three of the games with totals listed are over 220 points on this slate, which means there are plenty of slower paced matchups on this slate. The top game total is 235.5 points between Minnesota and Atlanta which will be a stand out game to target on this slate. The Timberwolves have played at the 3rd fastest pace in the league this year, while the Hawks started slow but have crept up to the 12th fastest (2nd fastest pace in the league over the past 7 games). The Hawks are also 27th in defensive efficiency this year, conceding the 3rd most fantasy points in the league.

Portland at Chicago is the next highest total at 227.5 points and also stands out as an elite game to target on this slate. Both sides are playing at a top 10 pace this season with Portland also sitting bottom ten in defensive efficiency.

As noted above Atlanta have the biggest pace up matchup in on this slate and sport a massive +8.2 different in their implied point total compared to their season average. Sitting just behind the Hawks on this slate is Utah who play against the fastest team in the league this year, the Milwaulkee Bucks. While a pace up matchup is always positive I am wary of targeting the Bucks as they are ranked number 2 in defensive efficiency this year and are around league average for fantasy points conceded.

Oklahoma City will be another popular team to target as they matchup against the worst defensive team in the league in the Golden State Warriors (dead last in defensive efficiency). The Warriors, despite playing at a league average pace, have also conceded the second most fantasy points in the league this year.

Cleveland are also in an elite pace up matchup against Brooklyn who are playing the 7th fastest pace in the league this year. This is a matchup that is unlikely to be heavily targeting on the slate.

Cam Reddish is questionable for the game against Minnesota. Over the last two games it has been the De’Andre’s who have seen the biggest boost in output. Bembry has played an addition 8.6 minutes and exploded for +18.1 fantasy points. While rookie De’Andre Hunter has also started to show serious potential scoring +10.2 fantasy points from a massive boost of 7% in usage. Both player prices have risen as a result, but with a positive matchup against the Timberwolves can still be considered if Reddish is out. 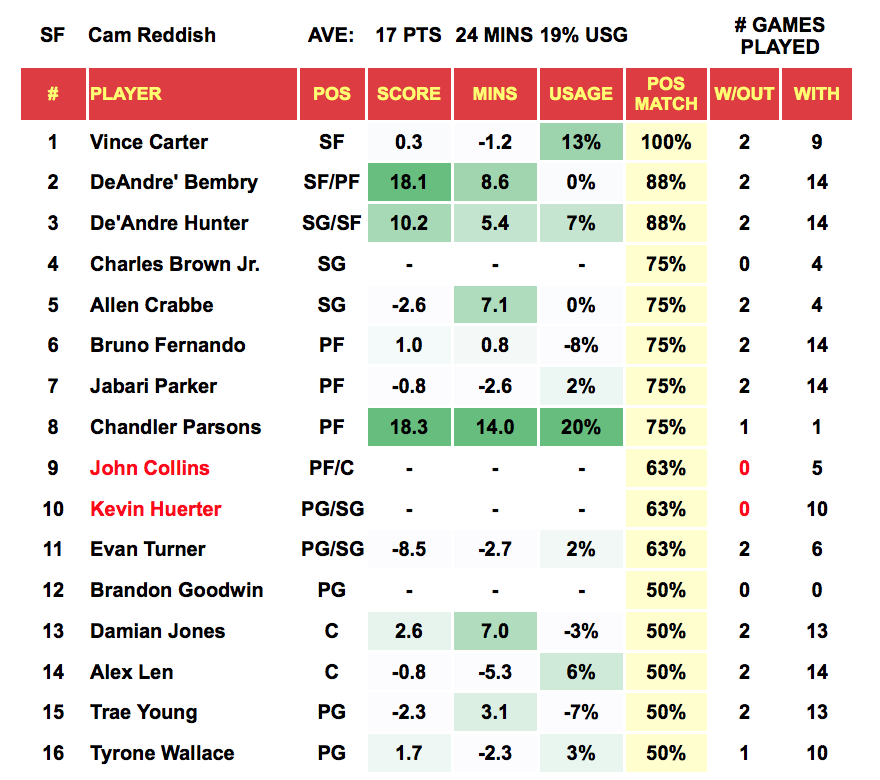 Kemba Walker is doubtful to play in the game against the Kings. Walker has yet to miss a game this season but is averaging 32 minutes of playing time with a 27% usage rate. Brad Wanamaker should take the starting position and he played 27 minutes last game where Walker got injured and returned 22 minutes. At just under 1 fantasy point per minute this year he is likely to be one of the chalkier plays on the slate if he is projected to receive close to 30 minutes of playing time. A lot of playmaking will also fall to Marcus Smart, Jaylen Brown and Jason Tatum.

Kevin Love is questionable for the game against the Nets. In games without Love this year Larry Nance has been a lock, averaging +10.6 fantasy points from an addition 7.4 minutes. Tristan Thompson will also be a strong play with an elite matchup against Brooklyn who have given up the 4th most points to centres this year. 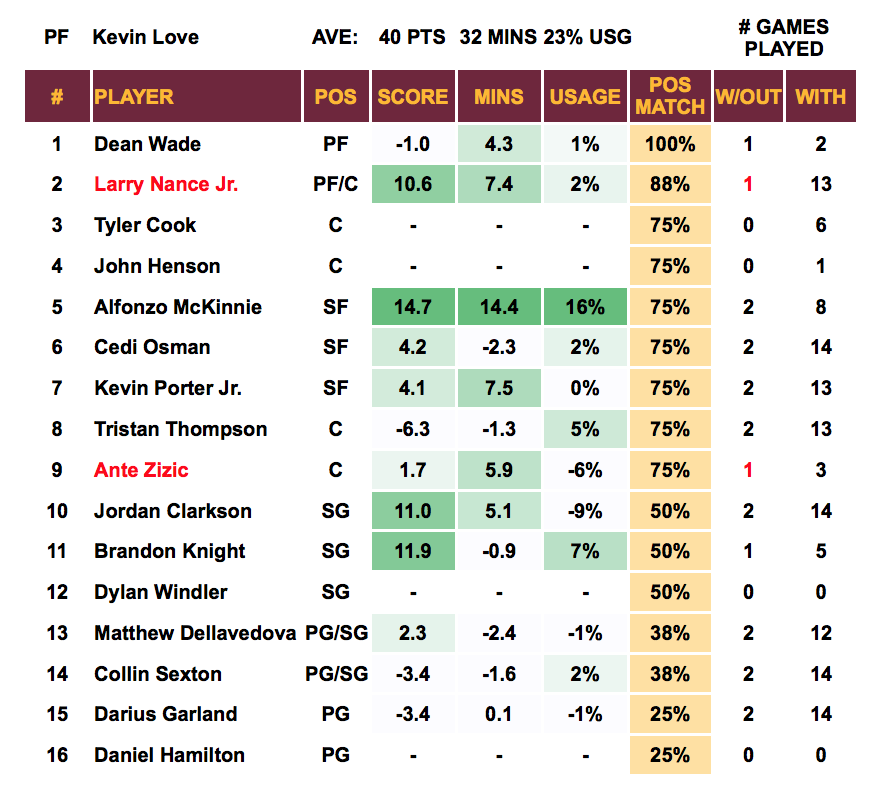 Draymond Green is questionable for the game against the Thunder. Without Green in addition to all the other star injuries the Warriors have been down a tiny rotation. Ky Bowman will start at point guard and he has averaged +12 fantasy points from an additional 15 minutes of playing time in games Green has not played this year. Eric Paschall also sees a significant boots averaging +9 fantasy points from a 6% bump in usage. Aaron Gordon and Nikola Vucevic will remain out for the game against the Pistons. In the first game without both players the workload was left to Jonathon Isaac (+8% usage) and Evan Fournier (+9% usage). Isaac’s price has skyrocketed as he is really starting to breakout this year but he has shown the upside to match his price posting 50+ fantasy points in the Magic’s last game. Rudy Gobert is questionable for the game against Milwaulkee. In the last game without Gobert it was Donovan Mitchell and soaked up the majority of the usage posting +13.5 fantasy points from and additional 6%.  Tony Bradley took Gobert’s spot in the starting lineup and he will be another chalky play on this slate if Rudy is out. Bradley posted 26 fantasy points from 22 minutes in the last game. 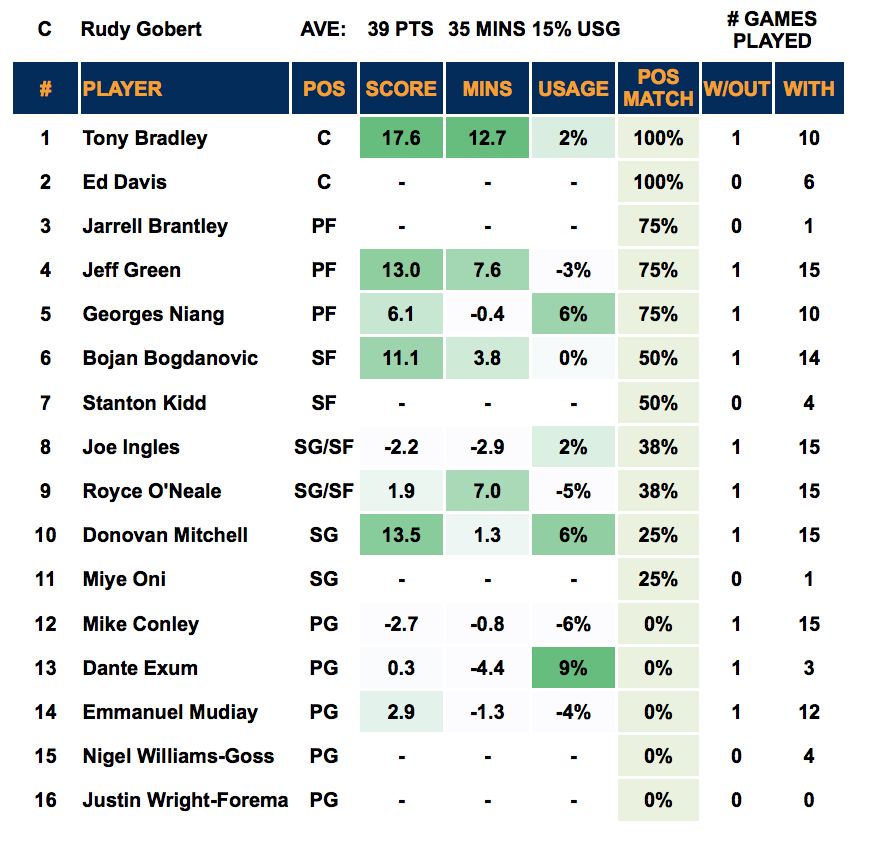 In addition to the possible plays noted above (specifically Brad Wannamaker and Tony Bradley), the current value players to consider include:

Rajon Rondo (MB $4,700, DS $9,460, DK $5,200) is still too cheap on Moneyball now that his minutes have risen. Playing 24+ minutes in three of his last four games off the bench Rondo’s usage rate has also risen to 20%. Rondo has averaged over 1 fantasy point per minute this year and if he can push into over 25 minutes on this slate he should return value in an elite matchup against the Spurs who are bottom 10 in defense this season and are giving up the 5th most fantasy points to point guards.

Hassan Whiteside (MB $8,700, DS $14,910, DK $6,100)... look I don't want to call Whiteside a lock and load on any day, but at his price on DraftKings against Chicago it is pretty close. The Bulls have given up the equal second most points to centres over the last 10 games and are ranked the 26th worst rebounding team in the league this season. Whiteside has posted 40+ fantasy points in 5 of his last 9 games. 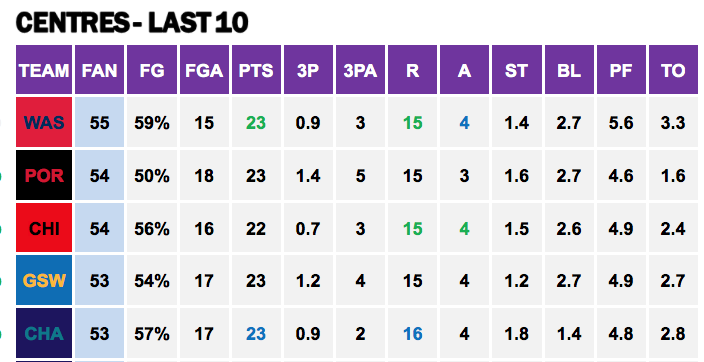 Jaylen Brown (MB $7,000, DS $12,300, DK $6,800) is a play I love at this price point, particularly with how banged up the Celtics are. He has topped 43 fantasy points in 4 of his last 8 games (since Hayward has been out) and has just one game under 32. If Walker is out in this matchup, which is looking like a near certainty, it will boost his usage. In addition he faces the Sacramento Kings on this slate who have given up the 5th most fantasy points in the league to small forwards this year.

Jonathon Isaac (MB $7,000, DS $14,320, DK $7,900) price is yet to respond on Moneyball. As we noted above without Gordon and Vucevic he is seeing a significant increase in usage (+8% last game) and he responded with a massive 51 fantasy points. He took 16 shots, which was the most he has taken this season. The Pistons are not a great matchup in terms of pace, however they are bottom 10 in defensive efficiency and they also concede the third most steals in the league which should play right into Isaac’s arsenal.

Karl Anthony Towns (MB $11,800, DS $21,560, DK $10,400) is going to be the chalk star on this slate. He is in the top game total on the board as noted above at a massive 235.5 points. Towns has already flashed his 70-80 point upside this year and top 60 fantasy points in two of his last three games. The Hawks are 27th in defensive efficiency this year and play right into Towns strengths as they are top 10 for three pointers conceded to centres. They have also given up the most fantasy points in the league over the last ten games.