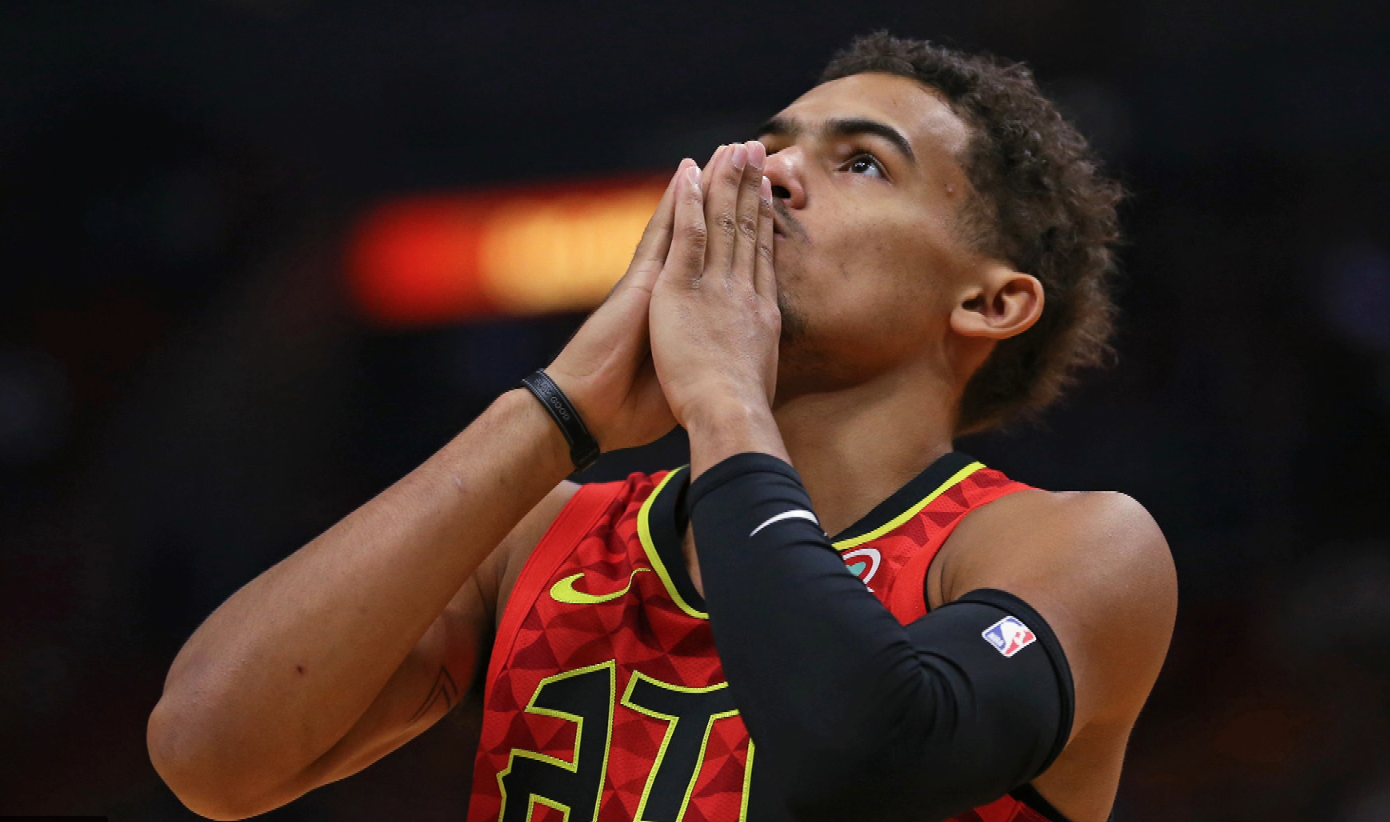 We kick off this week in the NBA with a very manageable slate. NBA Monday (Tuesday AEDT) features a perfectly sized 6 game slate and there are the usual array of massive DFS games across all platforms: 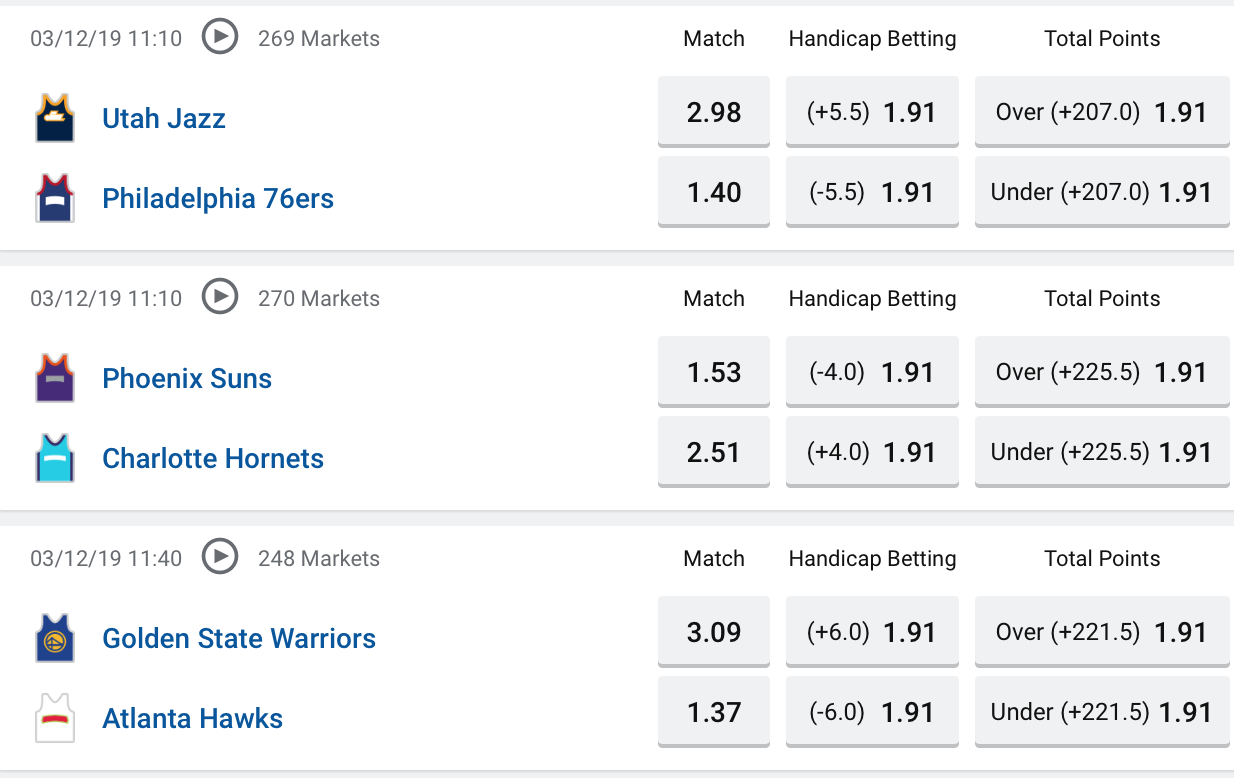 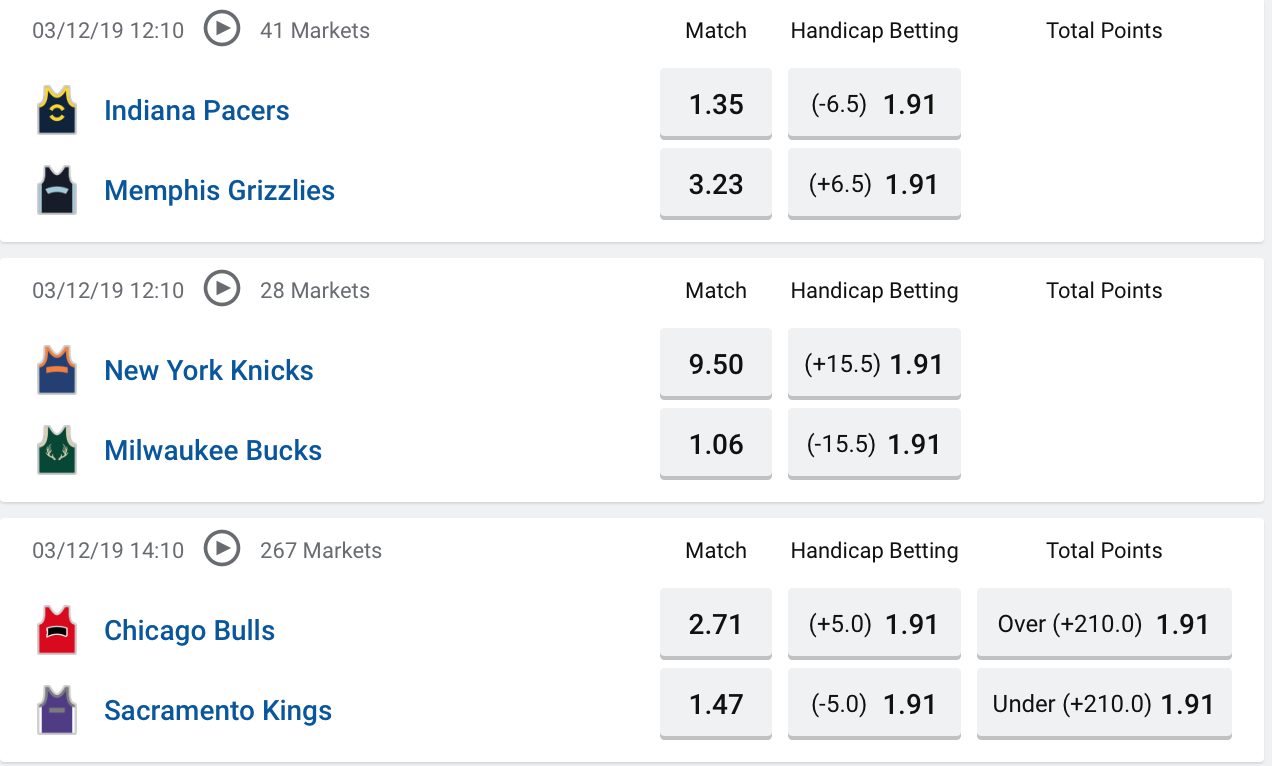 On just a six game slate there isn't a huge amount of high total matchups to target with just two games that are currently listed topping the 220 point mark. The highest total is 225.5 for the matchup between Phoenix and Charlotte. It is a pace up matchup for Charlotte who have been playing at the 6th slowest pace in the league this year, while Phoenix have played at the 10th fastest. Defensively, Charlotte has been one of the worst in the league, ranked 28th in defensive efficiency. This has resulted in the Hornets giving up the 5th most fantasy points this season despite playing at a slow pace.

The other game with a total over 220 is Golden State at Atlanta with a total of 221.5. I expect this game to be one of the most targeted on the slate as it features two of the bottom four ranked defenses in the league this year. This ranking has translated to both sides being in top four for fantasy points conceded this year. Both teams are ranked around the middle of the road for pace this year, however the Hawks continue to rise playing at the 3rd fastest pace over the past 10 games.

Indiana are another team that stands out has having an elite matchup on this slate against Memphis. The Grizzlies have played at the 6th fastest pace in the league this season, which puts the Pacers in a pace up matchup as they are ranked 23rd. In addition, Memphis is ranked 23rd in defensive efficiency and have conceded the 3rd most fantasy points in the league.

There are two games that are yet to have a total set as we await lineup and injury news. As usual I have broken down the impact of all possibly major lineup changes below.

Cam Reddish is questionable for the game against the Warriors. In the three games that Reddish has missed this season it has been the two DeAndre’s that have benefited the most. Bembry has typically moved into the starting lineup playing an additional 5 minutes per game for +10.2 fantasy points. Meanwhile, Hunter sees a 7% usage increase in games without Reddish, which has resulted in +9 fantasy points. 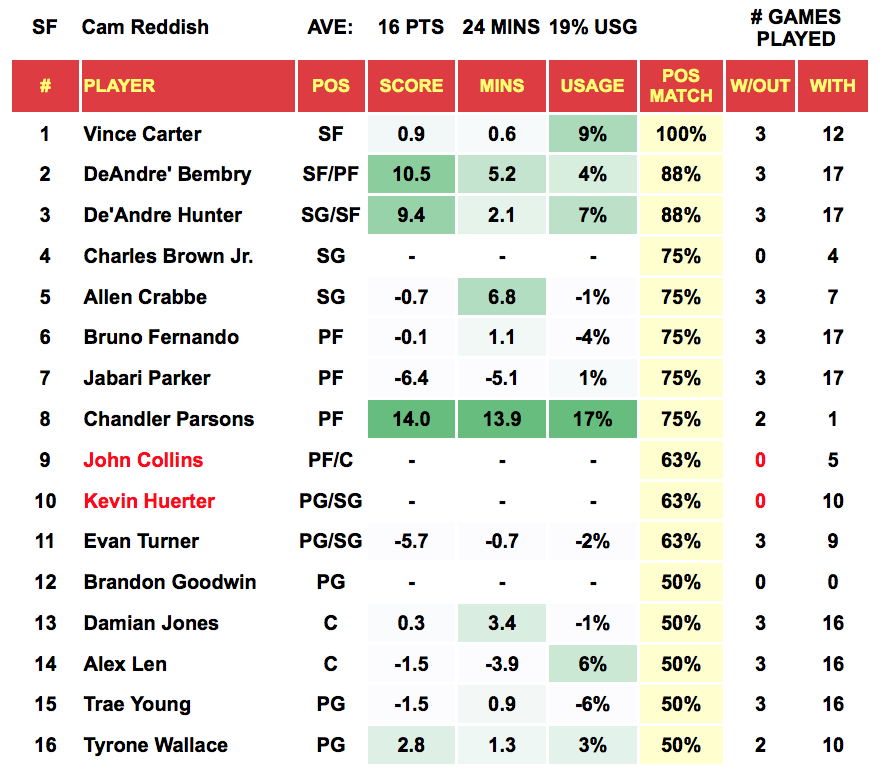 Draymond Green will be rested for the game against the Hawks. Green has been playing point guard for the Warriors, which means Ky Bowman will likely take his spot in the starting lineup. In the games Green has missed this year Bowman has played an additional 13 minutes per game leading to +12.9 fantasy points. 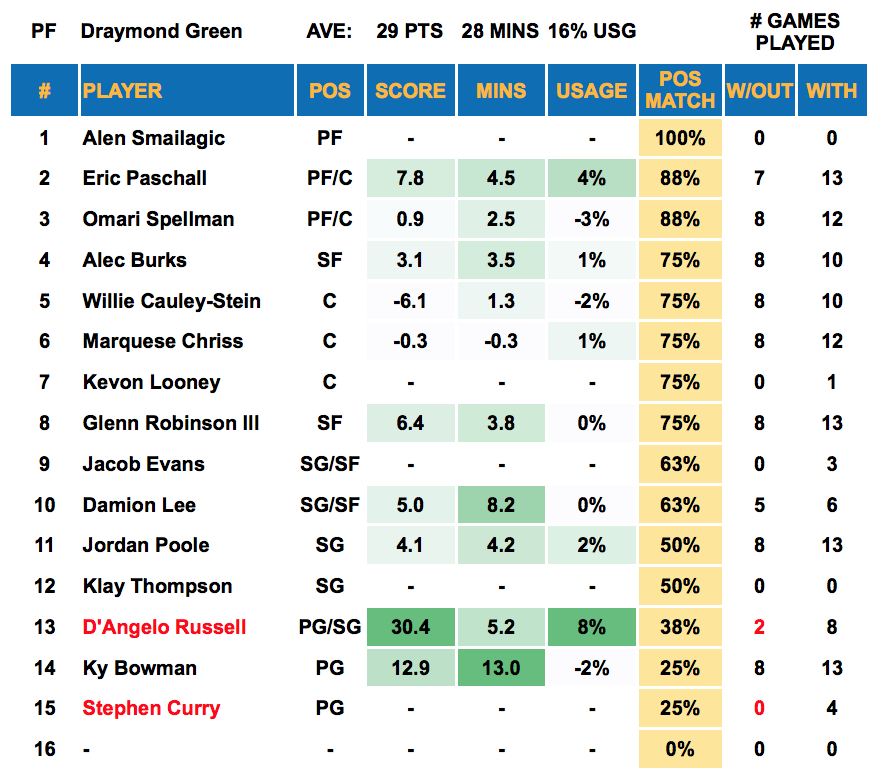 Brook Lopez is doubtful for the game against the Knicks. Lopez was out in the last Bucks game and his brother Robin started at centre posting 33 fantasy points in 24 minutes. His price has increased slightly since, however if Brook is out again you can expect Robin to be chalk again on this slate.

Ja Morant is listed as week to week due to back spasms and Jonas Valanciunas missed today's game with an illness. Tyus Jones takes over the starting point guard role when Morant is out and he has posted over 30 fantasy points both times that has happened this year typically playing an additional 8 minutes of game time. Jones price has shot up as a result, however the sneaky play could be De’Anthony Melton who has averaged +22 fantasy points from an additional 15 minutes per game.

Without Jonas Valanciunas last game it was Bruno Caboclo who had a massive performance posting 36 fantasy points. He is still priced at around the minimum mostly, however beware that he came off the bench to play 29 minutes, predominantly due to Jaren Jackson Jr being in foul trouble again.

Tyus Jones (MB $3,900, DS $7,870, DK $5,600) … as noted above with Morant out he becomes the obvious play on the slate at both Moneyball and Draftstars. He has averaged 0.84 fantasy points per minute this season and should play 25-30 minutes on this slate. If you are looking to get off the chalk in tournaments or at Draftkings where Jones has been sufficiently priced up Melton should see 20 minutes of playing time at the minimum.

Richaun Holmes (MB $6,300, DS $12,070, DK $6,500) will likely be a unique play on this slate as most will look to target other games. Holmes draws one of the top matchups on the slate for his position, however, as the Bulls have given up the second most points to centres this season and the most over the last 10 games. Holmes has shown 40+ point upside this season and typically collects double figure rebounds in those games and the Bulls have given up the most rebounds in the league to centers this year.

Jabari Parker (MB $7,700, DS $12,060, DK $6,900) is a GPP play for sure, but he makes for a possible low owned play on this slate after he burned everyone as chalk two days ago. We have already seen him top the 60 point mark this season, which gives him significant upside. He draws one of the top matchups in the league on this slate against the Warriors who have conceded the fourth most fantasy points in the league this season and will be without a likely defensive matchup in Draymond Green.

Zach LaVine (MB $7,400, DS $14,040, DK $7,900) I will be riding until the wheels come off. I have been deeply invested in each of the last two games where he posted 58 and 47 fantasy points. His ownership has climbed over those two games, and is likely to see another increase here as players fall into recency bias. But while his price remains low on Moneyball and Draftkings I will have exposure in tournaments. If you are looking for a lower owned alternative with similar upside on this slate a pivot to his opponent Buddy Heild is an option, as is a mini game stack with both shooting guards in the same team and hope for a shoot out.

Trae Young (MB $9,800, DS $18,660, DK $10,500) is likely to be the chalk star on this slate and with good reason. He draws one of the top matchups in the league against the Golden State Warriors who have conceded the fourth most fantasy points this season. They have given up the 7th most points to point guards this year, and the 7th most over the past 10 games. The Warriors will also be without their best help defender in Draymond Green. Young has been a revelation this year with just two games under 45 over his last 10 and has a ceiling of 60+ fantasy points that he has hit on multiple occasions this year. 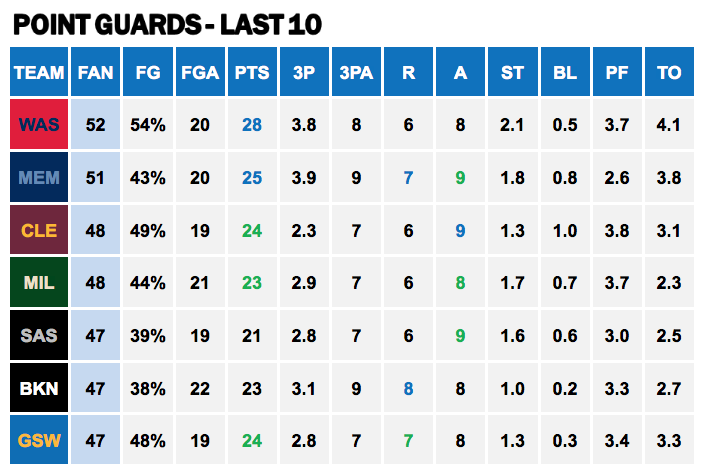 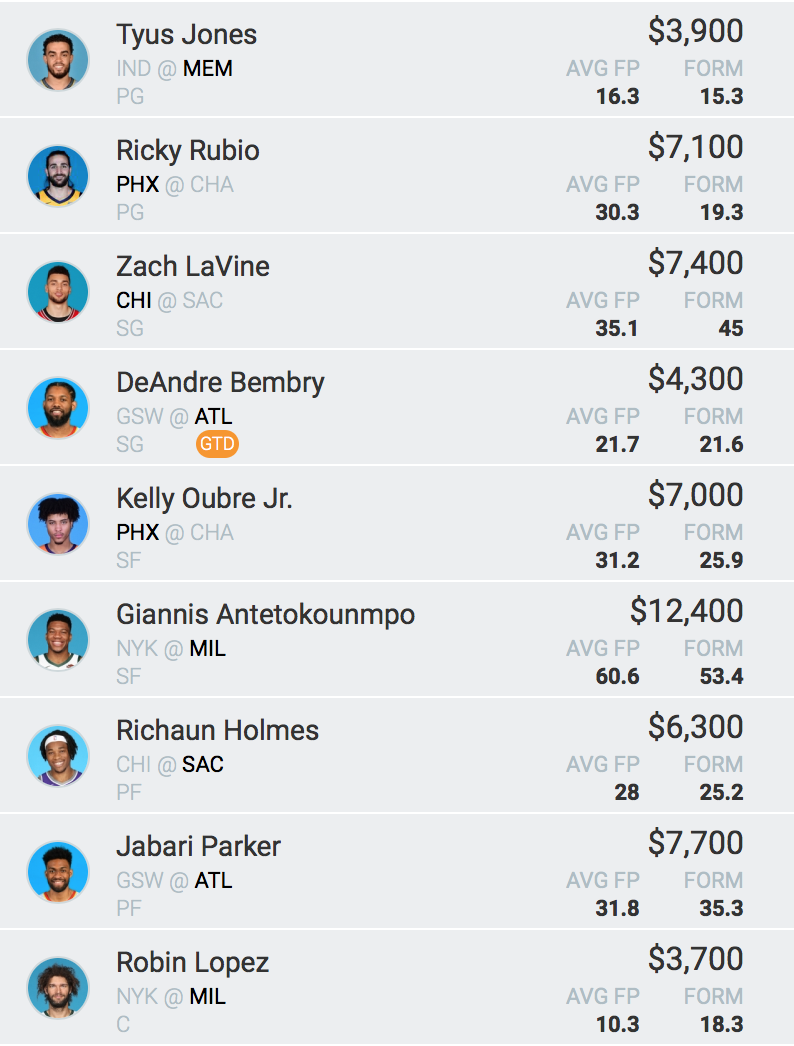