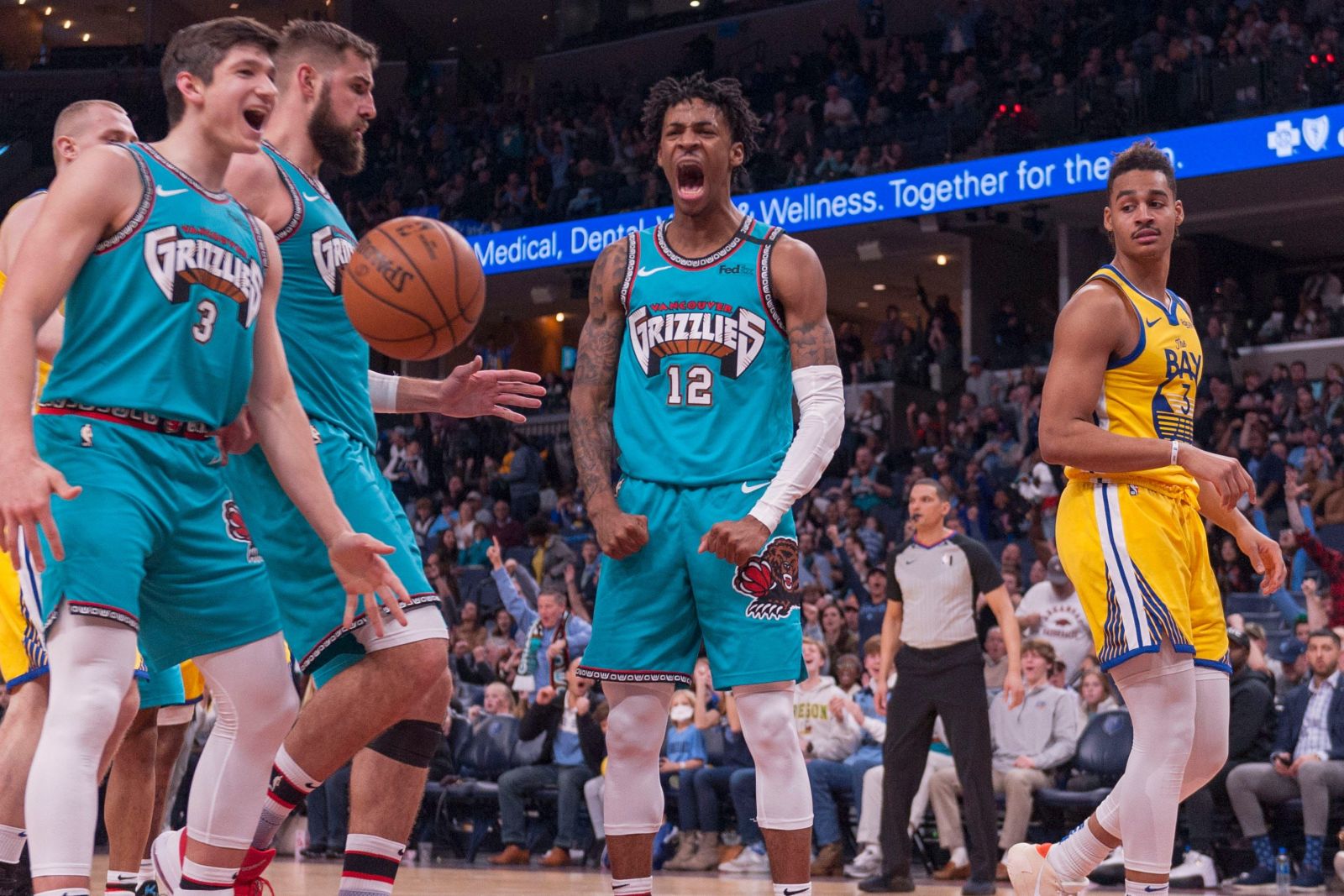 Time to crank up another week of NBA action as we start heading down the home stretch towards the playoffs.  NBA Monday (Tuesday AEST) delivers a very manageable 7 game slate for us to attack. The usual major daily fantasy tournaments on offer across the platforms:

There are just three games on this slate that we are yet to get game totals on at this stage while we await injury news. As usual I break down the major impacts to fantasy due to injuries below.

We are blessed with the greatest daily fantasy game ever on this slate as Memphis play Atlanta. The total is set at a massive 240 points with both teams in a significant pace up spot as they are both top 7 in the league in pace this season. In addition, Atlanta are the 3rd worst defensive team in the league and give up the most fantasy points. Memphis are also a great team to target against as they are below average in defensive efficiency and have conceded the 7th most fantasy points this season. The best part is the game is expected to be competitive with a line of 2 points. This game is going to be the clear target for game stacks and totally chalk across the board.

The next highest total is Houston at New York at 230.5 points. While this looks attractive, the Rockets in their new form have been much tougher to score against than earlier in the year. Over the last 7 games they have given up the 9th fewest fantasy points while having a top 10 defense. The Knicks are by no means a fast-paced team and there is huge blow out potential in this match-up. So, while the total stands out I think I will be light on this game.

Miami has the biggest pace up match-up on this slate against Milwaukee who are playing at the fastest pace in the league this season. This all sounds well and good, but despite playing up-tempo, the Bucks are arguably one of the best defensive teams in the history of the league. As a result, they have given a below average amount of fantasy points this season.

The sneaky game I like to target on this slate is Portland at Orlando. The total is set at 222 points, but it is a pace up spot for the Magic and the Blazers have given up the 5th most fantasy points in the league this season. They are 11th in the league in pace and 27th in defensive efficiency so I will be looking to get significant exposure to the Magic players on this slate. 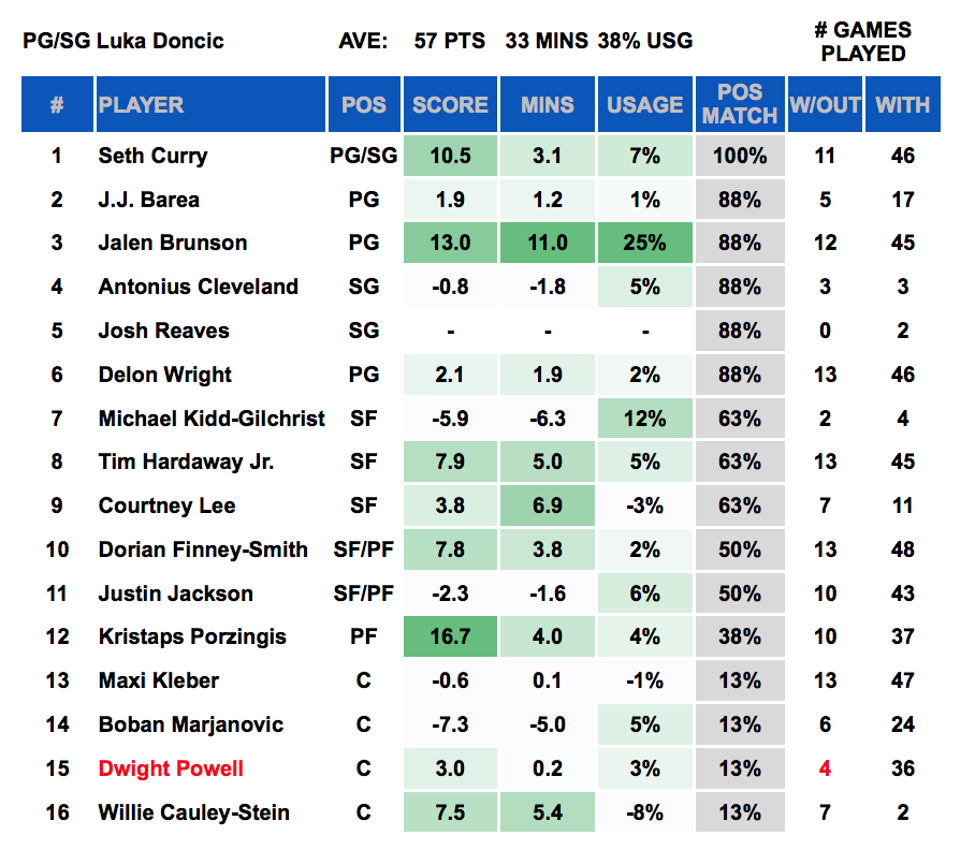 LaMarcus Aldridge is doubtful while Jakob Poeltl remains out for the game against Indiana. If both players are out it will be Trey Lyles who gets the biggest advantage. In the Spurs last game against the Magic with Poeltl going down after 4 minutes, Lyles logged 40 minutes and returned a season high 40+ fantasy points. Rudy Gay also had a monster game with 39 fantasy points from 30 minutes. 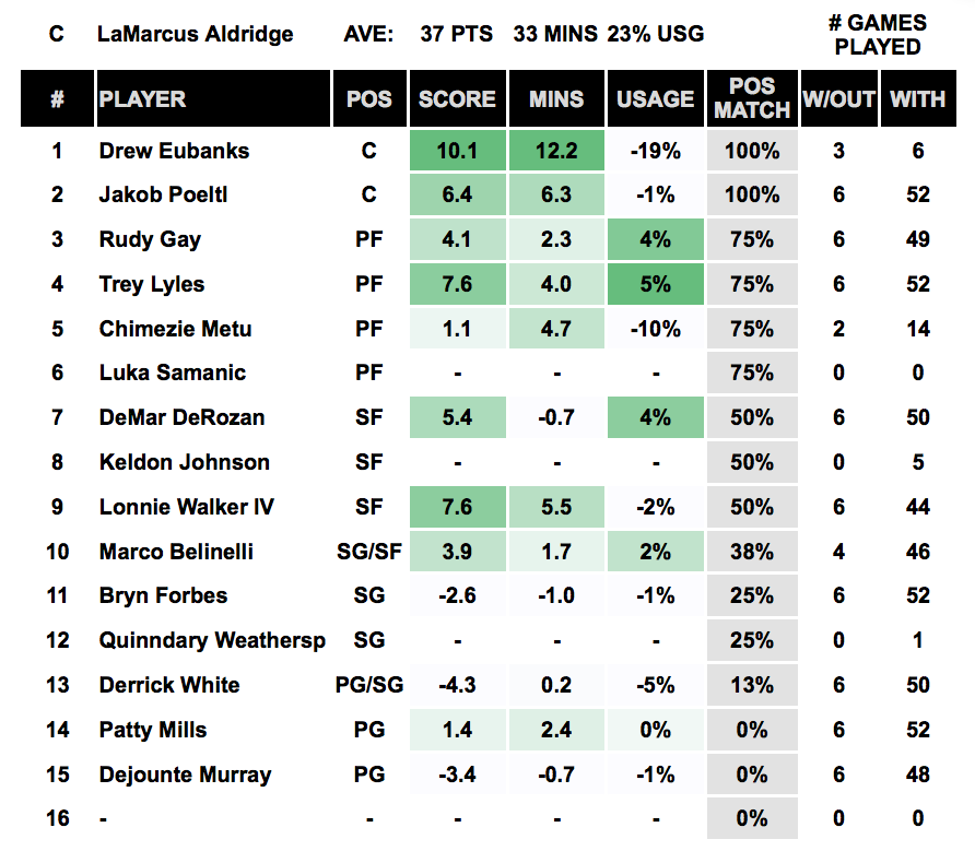 Dwayne Dedmon is out and Cam Reddish is questionable for the game against the Grizzlies. John Collins has started at centre in the last two Hawks games without Dedmon in the lineup and he has excelled posting 50+ fantasy points in each game.

In addition to the possible value plays noted above (Trey Lyles, Rudy Gay):

Maurice Harkless (DS $7,100, DK $3,500, MB $4,100) has taken over the starting wing role for the Knicks and is essentially locked into the 25-30 range of minutes. Over the past two games he has posted 28 fantasy points per game, including a 30 point outing where he shot just 3/10 from the floor, meaning he doesn't have to score to cover us in fantasy points. In addition, he also draws a solid match-up on this slate in the second highest game total against the Rockets who have allowed the equal 6th most fantasy points to forwards over the past 10 games.

James Ennis (DS $6,200, DK $3,900, MB $4,100) has become my defacto value play where there isn't an obvious avenue to salary relief. As the starting small forward for the Magic he is locked into 25+ minutes per game. Over his past 5 games he has averaged 19 fantasy points, which is essentially right on a value return for his price point across the platforms. He has a great match-up against Portland who have given up the 6th most fantasy points to small forwards over the past 10 games. 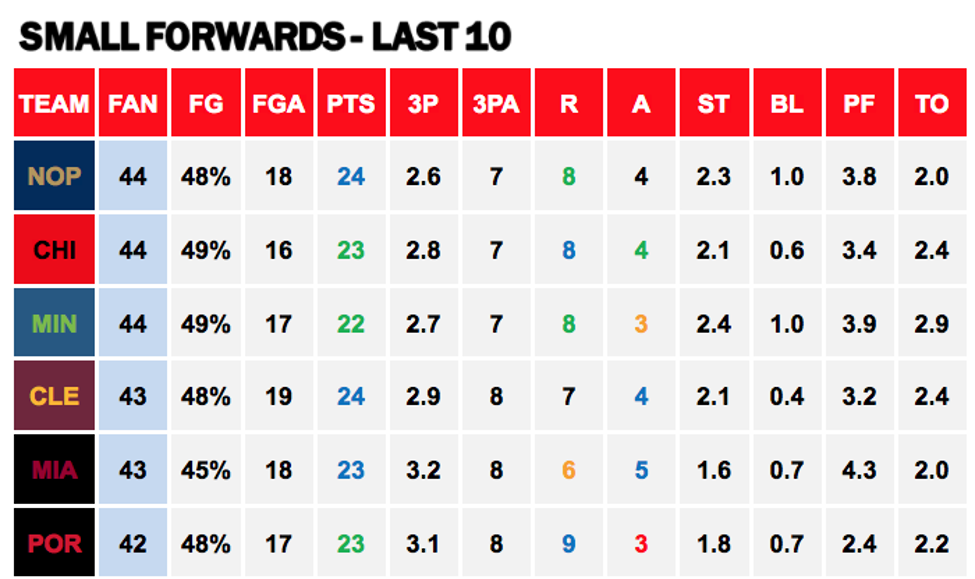 Ja Morant (DS $12,580, DK $7,100, MB $6,100) looks to be well and truly out of his rookie slump posting 30, 41 and 59 fantasy points from his last three games. He will be the first player I lock in given he is in the fantasy game of the century with a 240-point total. His direct opponent will be Trae Young who is effectively the worst defensive player in the league (although I am sure he will be hidden on someone else). I will be stacking this game every which way and almost all of them will include Morant.

CJ McCollum (DS $16,830, DK $9,300, MB $9,100) has had just 1 game under 50 fantasy points form the last 5 games and, in that game, he still notched 43 fantasy points. He has simply taken over right from where Lillard left off before his injury, and particularly on Draftstars his price hasn't truly reacted yet.

Domantas Sabonis (DS $15,860, DK $8,800, MB $8,700) has one of the top match-ups in the league for his position where he splits between power forward and centre. The Spurs have given up the equal 4th most fantasy points to this combination, and this will only get worse if the Spurs are forced to start small with Trey Lyles at centre and Rudy Gay at power forward. Sabonis will absolutely destroy them on the glass either way and should cruise to a 40+ point outing on this slate. 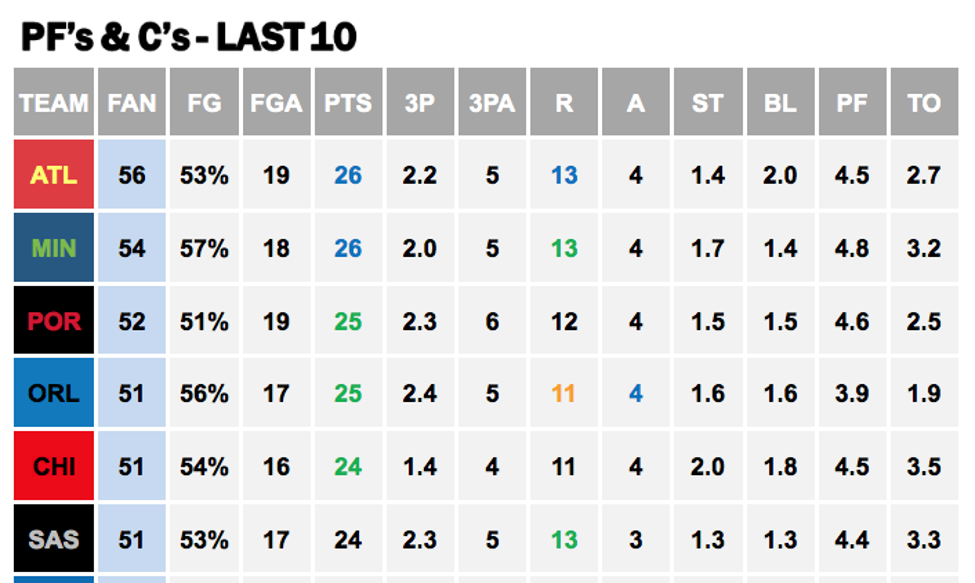 Jonas Valanciunas (DS $14,960, DK $6,800, MB $6,800) looks to be set for 30+ minutes at the moment due to the Grizzlies being totally shorthanded at the centre and power forward positions. He has always been a fantasy point per minute monster and this season has been now different posting 1.31 fantasy points per minute. Over the past two games he has averaged 50 points per game and on this slate, he draws the top matchup in the league for his position against the Hawks. 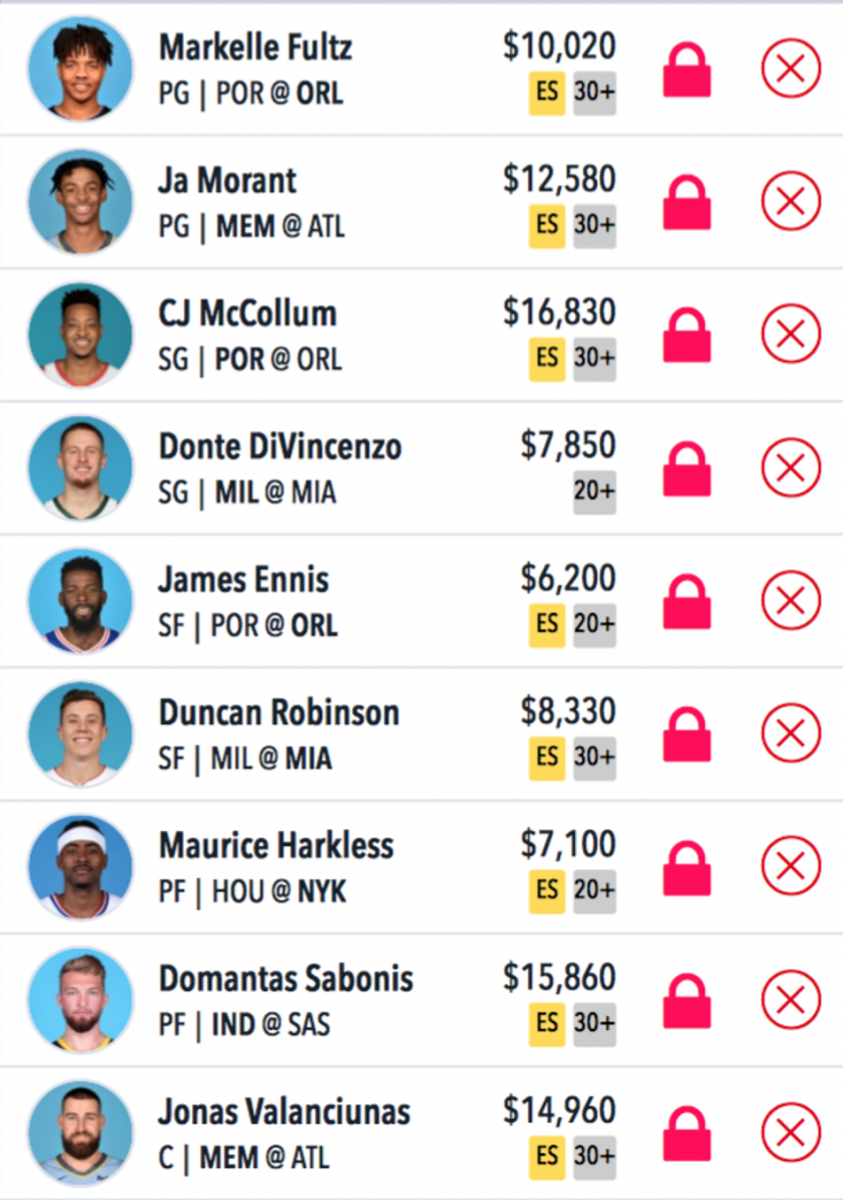