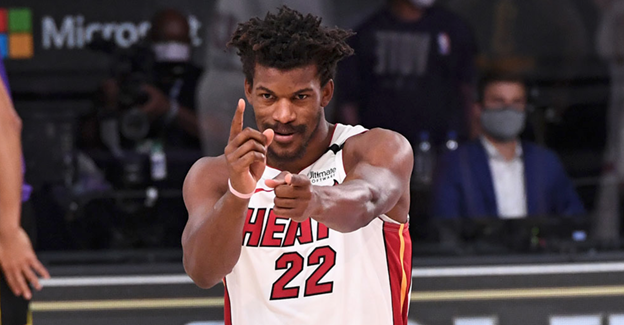 This week's NBA Wednesday (Thursday AEST) brings yet another mega 10 game slate! It is time for us to dig and give you all the tips and tricks to build winning lineups, and we need it to take down the massive daily fantasy contests both platforms are offering:

We have all games with lines set already, which is a good sign for news not tearing the slate apart too much. As always, I breakdown all the possible impact of injury and lineup news from a fantasy perspective below.

The top game total on the slate is Indiana at Milwaukee at 232.5 points. The key point to note about this game is it is 8 points higher than the next highest game, which automatically puts it in play as a game stack option. The Bucks have been playing at a blistering pace this season (7th fastest in the league), while sporting a below average defensive efficiency.

The fastest matchup on the slate is Washington at Miami, which sports the highest projected pace. The total is 230 for this matchup, but Miami will be in a significant pace up spot as the Wizards play at the fastest pace in the league and second last in defensive efficiency. This has resulted in conceding the 2nd most fantasy points.

De’Andre Hunter is out for the game against Dallas. Cam Reddish will start in place of Hunter like the last game against the Lakers. While he played 30 minutes his usage was low and only managed 11 fantasy points.

Andre Drummond is questionable, and Larry Nance Jr is out on this slate. If both are out Jarred Allen will be a chalk play against after dropping 58 fantasy points last game from 35 minutes. His price has bumped up after that performance but at 1.15 fantasy points per minute this season he will again be in a great spot to return value.

John Wall is out for the game against the Thunder. Eric Gordon will likely move into the starting lineup while Victor Oladipo will see more play making opportunities and a sneaky option will be Jae’Sean Tate who also should see a usage boost as a playmaker.

Steven Adams is questionable for the game against the Suns. I will go right back to Jaxson Hayes if Adams is out on this slate. Hayes burnt a lot of people last game with foul trouble so we can naturally see his ownership drop off, which makes it an even better play this time around.

UPDATE: Russell Westbrook and Kemba Walker have been ruled out due to rest on back-to-backs. All systems go for Bradley Beal for the Wizards to soak up the usage and expect Ish Smith to start with an already thin back court.

Josh Richardson (DS $8,500, DK $4,500) has had a horrible season so far, but the last game looked to have the renewed intensity we had seen in the past from him. He got up 16 shots and returned 40 fantasy points. There is a lot of heat on the Mavericks right now and I expect them to continue to go all out from here as they attempt to peg back games to get into the playoffs. Too cheap with huge upside.

Jae’Sean Tate (DS $7,350, DK $4,700) has posted back-to-back 27+ point games as the surprise Rockets continue to blow through the league. This is the second leg of a back-to-back against the Oklahoma Thunder and Tate, who has provided a lot of play making from his position will have a greater opportunity to do so without John Wall in the lineup for this matchup.

Kemba Walker (DS $11,610, DK $6,500) saw his minutes lift the 30-minute mark for the first time this season against the Golden State Warriors. He is well and truly back from injury now and as a result his price is too low for his potential. He posted 37 fantasy points last game and 40 points 4 games ago. On this slate he draws one of the top matchups in the league against the Sacramento Kings who have given up the 7th most fantasy points to point guards this season.

Walker has been ruled out due to rest on a back to back. Jeff Teague should start but expect the heavy lifting now go towards Jayson Tatum and Jaylen Brown.

Jimmy Butler (DS $14,620, DK $8,400) has been a fantasy monster since returning to the line with three straight games of 50+ fantasy points. His price hasn’t risen enough on Draftstars and on this slate he draws the second-best matchup in the league against the Washington Wizards who play at the fastest pace and have conceded the second most fantasy points this season. Lock and Load!

Julius Randle (DS $16,990, DK $9,100) is fresh off back-to-back 50 point fantasy games including a 51 point performance last game against the Chicago Bulls, how they coincidentally play again on this slate as part of a second leg of a back to back. The Bulls have had the 26th ranked defensive efficiency in the league this season and play at the 3rd fastest pace in the league, which puts the Knicks in a massive pace up spot. 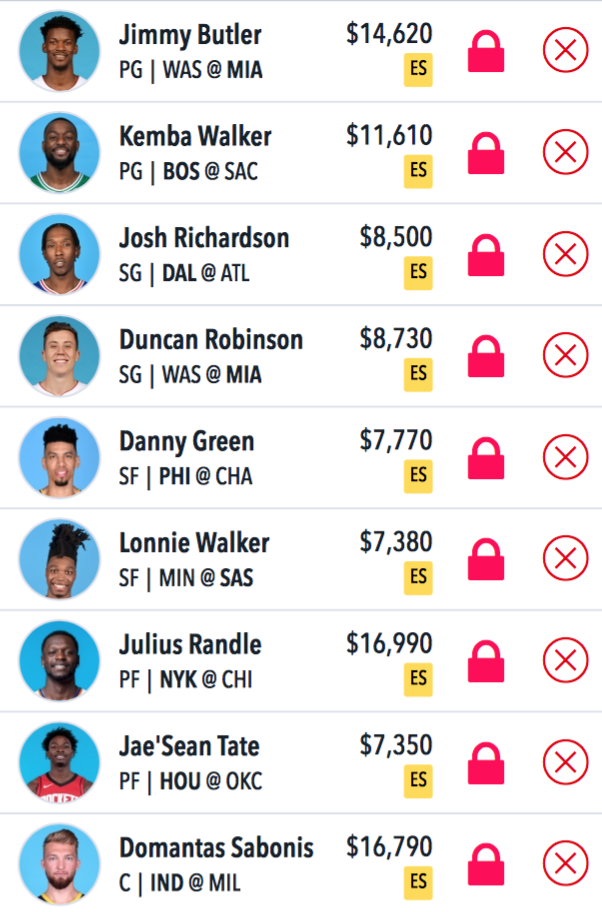