Welcome to the weekend and NBA Friday (Saturday AEST) brings a monster 9 game slate to attack. As always there is a wide variety of maasive daily fantasy contests on offer:

An even spread of totals today with the lowest at 218 and the highest at 232.5. However if you look at the spreads only a couple of games are forecast to be close while the remaining games are at least 5+ in spreads. Keep that in mind when looking at stacks.

One of games to look out for on the slate is Phoenix at Chicago with a 225.5 point total. This matchup sets one of the fastest teams in the league (Chicago, 3rd in pace) against one of the slowest (Phoenix, 29th in pace). As a result rather than game stacking this matchup I prefer to target Suns who are playing way up in pace and as a result should get the bigger boost in fantasy points.

The sneaky game to target on this slate is Charlotte at Golden State. It has the highest projected pace and total of all the matchups for the day with the Warriors playing at the 3rd fastest pace in the league and Hornets above league average at 12th. The Hornets have also given up the 3rd most fantasy points this season, making them an elite target for daily fantasy.

Cody Zeller is doubtful for the game against the Warriors. Bismack Biyombo will likely move into the starting centre position and become an elite value play. PJ Washington will also likely spend some time at centre, which should boost his minutes and fantasy points.

Saddiq Bey is now available for the game against Sacramento. Josh Jackson may move into the starting lineup if Bey is out and even though his price is up now, it should result in more minutes and Jackson has been averaging over 1 fantasy point per minute this season.

Bam Adebayo questionable and Tyler Herro (OUT) for the game against Utah.  Adebayo out would be the big news here with Precious Achiuwa lurking in the wings averaging a nip under 1 fantasy point per minute at the absolute basement price.

Al Horford will not play against Atlanta. Enter Isaiah Roby, who has been great all season averaging 1 fantasy point per minute and in games without Horford has consistently returned value.

The Kings have a couple players in health protocols in Hassan Whiteside and Jabari Parker. The Kings have been playing a tight 8 man rotation with Cory Joseph, Tyrese Haliburton (now OUT) and DaQuan Jeffries getting more run.

Also in somewhat quirky news. 6 members of the Raptors coaching staff including Nick Nurse are in health protocols and will not be on the bench in today's game.

Malik Monk (DS $8,720, DK $5,200) is going to be a lock and load play for me on Draftstars. His price is still in the value range and he has been absolutely blazing, averaging 29.5 fantasy points over the past three games. His playing time has become more consistent with Devonte Graham out, playing in the 20-30 minute range and on top of that he is in my favourite matchup of the slate against the Golden State Warriors.

Dennis Schroder (DS $10,250, DK $5,900) looks to be returning from health and safety protocols. Unfortunately, he has missed the majority of the stretch that Anthony Davis has been out, which is when we would expect a massive usage increase for Schroder who is the Lakers only other playmaker available behind Lebron. The last game he played without Davis in the lineup just before he went into protocol he dropped 35 fantasy points on 15 shots. On this slate he also draws one of the top matchups in the league for point guards with the Blazers giving up the 3rd most points to the position.

Devin Booker (DS $13,950, DK $8,000) just sneaks into the mid range price on Draftstars and looks to be a solid play to return value on that platform. He has been on a solid run with three straight games of 37+ fantasy points and back to back games of 33+ real points. On this slate he is in a huge pace up matchup against the Bulls as we noted in the game breakdown above.

Steph Curry (DS $19,300, DK $9,700) will give some narrative for those who buy into that with this game against his hometown squad that he missed last week. Also, as I noted above in the game breakdown, this is the game stack matchup of the slate with the highest projected place and the Hornets have been leaking fantasy points all season, including… you guessed it, the second most 3 pointers. Lock and load!

Shai Gilgeous-Alexander (DS $16,510, DK $8,800) has been absolutely destroying people this year and is currently on an absolute burner posting 51, 40 and 61 fantasy points from his last three games. What makes him stand out on this slate is firstly the fact that Al Horford is out, who really acts as the Thunder’s second play maker, which will give a usage boost for Shai. In addition, the matchup against the Hawks is elite for point guards with Trae one of the worst defenders in the league and Atlanta conceding the 5th most fantasy points to point guards this season. 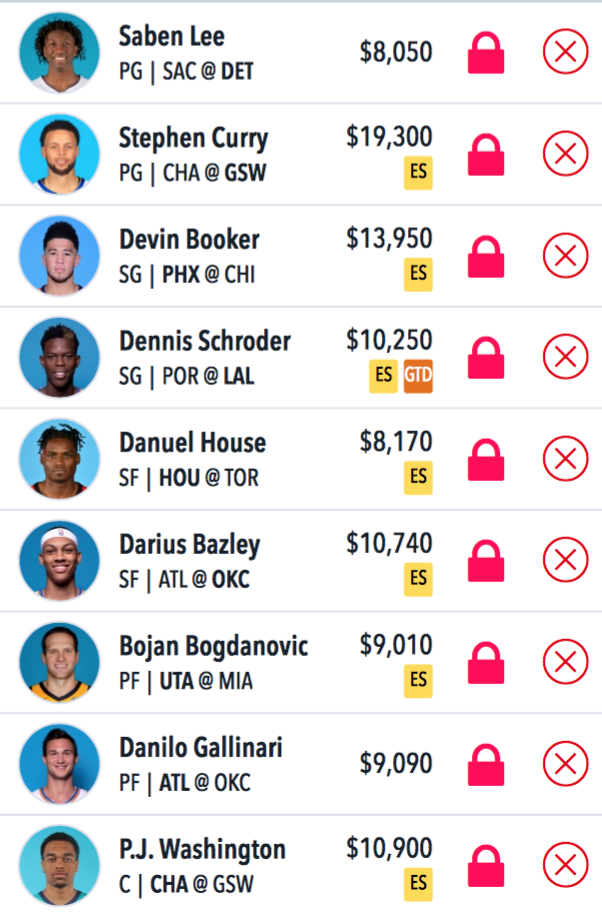