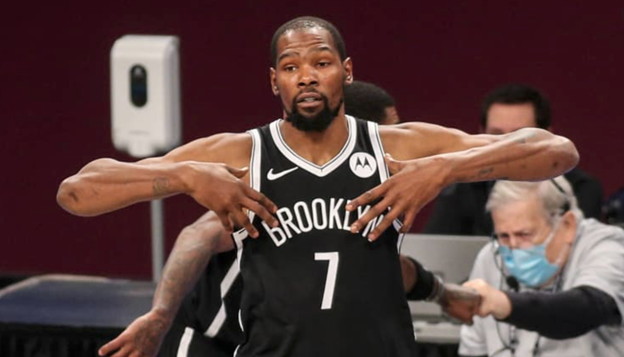 We get the first NBA Friday (Saturday AEST) slate of 2021 underway with a massive 10 game slate! This article will bring you all the information to get you set for daily fantasy takedowns. As always there is a wide offering of huge contests on offer across the major platforms: 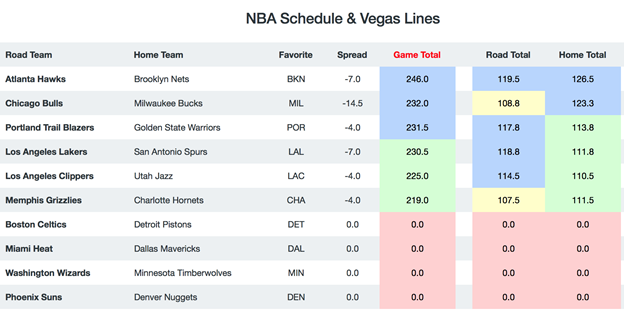 There is a huge amount of information to work through on a 10 game slate. As always in NBA we will be awaiting late information with four games yet to have totals set. We break down all the major injury news impacts below.

The top game on the slate is the second of a back-to-back between Atlanta and Brooklyn. The total has ballooned for this matchup compared to NBA Wednesday (Thursday AEST), now set at 246 points. This comes after the two sides lit up the scoreboard like a pokies machine with the Nets edging the hawks 145-141. This will once again be the game to stack with both sides top 6 in pace so far this season and Atlanta 26th in defensive efficiency.

Portland at Golden State also factors to be a fantasy rich matchup with the Trailblazers currently sporting the worst defensive efficiency rate in the league (while the Warriors are not much better as the 26th worst team). It is also a massive pace up spot for Portland as Golden State is playing at the fastest pace in the league.

Out of the games without a total yet set Washington at Minnesota stands out as a great game to target. The Wizards are 3rd in pace with Westbrook pushing the ball at every opportunity and both sides are bottom 10 in defensive efficiency.

Lauri Markkanen is out for the game on this slate due to health protocols. Otto Porter Jr took the starting power forward role with Markkanen out in today’s game and posted a ceiling game of 28 points and 12 rebounds. The matchup on this slate is substantially harder, however, with the Bulls going from facing the Wizards to the Bucks.

Blake Griffin is out and Killian Hayes is questionable for the game against the Celtics. This will likely result in both Delon Wright and Derrick Rose being inserted into the starting lineup. Wright is cheaper in price, however Rose has the better production at right around 1 fantasy point per minute this season. Keep an eye on the news as Sekou Doumbauya would be an interesting target if we could get any confidence over him receiving substantial playing time.

Lebron James is questionable for the game against the Spurs. At this stage it looks like this injury status will be a standing one for the entire season. I would be surprised if Lebron doesn’t play, but just in case look straight to Anthony Davis for the usage boost and Kyle Kuzma for the boost in minutes (assuming he will take the starting role).

Russell Westbrook is only playing one leg of back to backs, which means he is expected to sit out on this slate. Raul Neto will start at point guard in Westbrook’s place and we saw the upside he offers in that role two games ago when he posted 40 fantasy points from 32 minutes. He is still priced near the minimum and would be a near lock if he is getting the start.

Rui Hachimura (DS $8,289, DK $5,300) made his debut today and picked up right where he left off form his rookie campaign putting up 17 points and 5 rebounds en route to 30 fantasy points in just 25 minutes. His usage should see an uptick if Westbrook is out on this slate and given his low price, he is close to an automatic play, expect him to be a few thousand more expensive by next week.

Bobby Portis (DS $7,490, DK $4,500) will be a GPP target for me on this slate. With the Bucks facing one of the league's worst teams in the Chicago Bulls I firmly expect an early blow out. Portis has always been a fantasy point per minute monster and this season has been no different with him putting up over a point a minute. In three games where he has played at least 26 minutes he has returned just over 30 fantasy points and he could be in line for that amount of workload in this matchup if the Bucks end the game in the first half.

Andrew Wiggins (DS $11,130, DK $6,900) has found his shooting range the last two games posting a 39 and 49 fantasy point game. On this slate he draws the worst team in the league from a defensive efficiency perspective and on Draftstars has yet to see a price bump based off his recent performance. Curry is generating open looks all over the floor from Wiggins and he is also given the opportunity to run the second unit. If he can make shots, he will return value at this price.

Demar Derozan (DS $12,900, DK $7,300) has the same matchup as last game against the Lakers. His price hasn't moved on Draftstars and nothing has changed from my last preview where I broke down Derozan’s increase in playmaking opportunities. He is averaging over 8 assists per game this season, which means if he can make shots (taking over 13 per game) he is a lock to return value at this price. In their game against the Lakers two days ago he posted 41 fantasy points.

Kevin Durant (DS $16,380, DK $9,100) is a lock and load premium play on this slate. We still haven’t seen his price hit the range it will likely be mid-season and he draws arguably the best matchup in the league on this slate. As mentioned above the total is beyond ridiculous at just under 250 points and the Hawks literally have no one who can even trouble Durant. Two days ago, he went for 63 fantasy points on 33 points, 11 rebounds and 8 assists. I will be stacking this game every which way, starting with Durant (adding in Trae Young and Kyrie Irving).

Bradley Beal (DS $15,700, DK $9,400) should be a nice pivot away from the Nets Hawks stacks assuming Westbrook is out. Beal’s usage rate this year has been a whopping 34% and this number bumps up without Westbrook on the floor. His playmaking will increase (similar to last year) especially if Neto has a quieter game than last time Westbrook was out. The Timberwolves are around league average for pace and are the third worst team on this slate in terms of defensive efficiency making this is an elite matchup for Beal 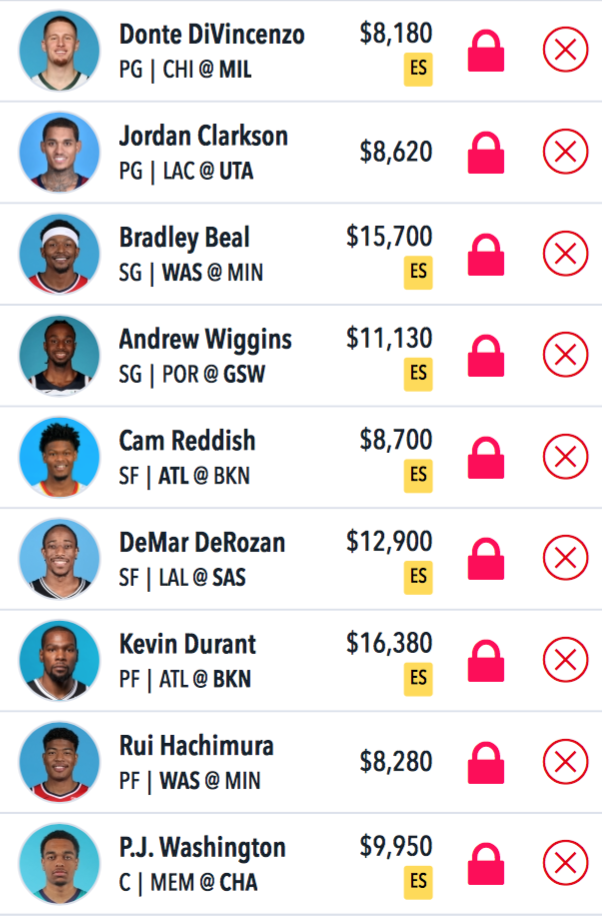