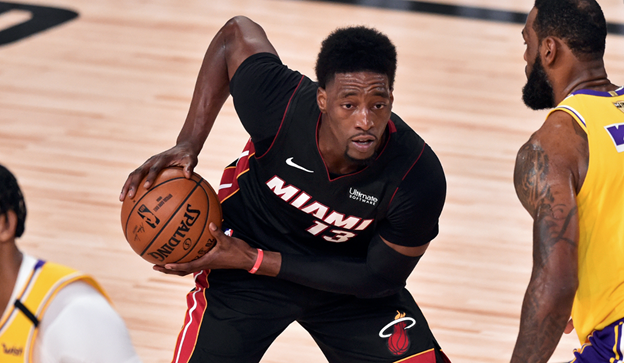 The weekend is here and that means a monster NBA slate for NBA Friday (Saturday AEST)!! This week it is a monster 9 game slate and the major platforms have massive daily fantasy contests on offer for us:

We have three games without a line and total at this point as we await news. As always we have broken down the impact of all injuries and lineup news on this slate from a fantasy perspective below.

The top game total on this card is a massive 242.5 points between Toronto and Brooklyn. The Nets lift every game total they are in currently as they are sporting a historically good offense, play at the 4th fastest pace in the league and an atrocious defensive team (26ths in defensive efficiency). This turns every game into a shootout and makes the Nets matchup a game stack opportunity every time they are on the slate.

The next highest total is Washington at Miami, which is 228 points. This game projects as the fastest paced game on the slate, however we did get a glimpse of this matchup two days ago when the Wizards won 103-100. The Wizards are always a team that you can target, however I will look past them on this game unless lineups open up obvious plays.

The sneaky game stack option is Minnesota at Oklahoma. Both sides have leaked fantasy points this season with the Timberwolves giving up the 2nd most in the league, while the Thunder have conceded the 5th most. Both sides are top 10 in pace and the game projects to be the second fastest matchup on the slate.

Larry Nance remains out on this slate. Taureen Prince has started at power forward over the past two games without Nance in the lineup and played an average for 30 minutes for a return of 24 fantasy points per game.

Shai Gilgeous-Alexander, Lu Dort and George Hill will all be out for the game against Minnesota. Hamidou Diallo will start and has been a fantasy point per monster this season averaging over 1 fantasy point per minute. He will be playing over 30 minutes in this game in an elite matchup. Theo Maledon will also start at point guard, over the last 5 games he has averaged 30 minutes per game for a return of 25 fantasy points. The final starting position is up for question but last game after Dort went down Justin Jackson played 30 minutes but only managed a return of 12 fantasy points.

PJ Washington is out for the game against Utah, while Terry Rozier is probable. Miles Bridges will start for PJ Washington, last game he played 32 minutes and notched up 32 fantasy points.

Paul George has popped on the injury report late with a foot injury, currently questionable and the last game of the night. So a tough spot if you want George shares but Kawai Leonard will get a boost if George is ruled out.

Jaylen Brown has been ruled out for the Celtics with a knee injury. With Marcus Smart still out, you will see a mixed bag of rotations through Javonte Green, Grant Williams and Semi Ojeleye (who is garbage fantasy scorer). Although Kemba Walker will return for the Celtics and may need to play 30 minutes plus here.

Kelly Olynyk (DS $8,640, DK $4,800) offers a safe value option if nothing more obvious opens up due to players being out. He has started at power forward the last three games for the Heat playing an average of 25 minutes for a return of 25 fantasy points. On this slate he draws one of the top matchups in the league against the Wizards who have given up the 3rd most fantasy points in the league.

Darius Bazely (DS $10,720, DK $5,700) I love as a GPP play given the upside he has offered this season. He is feast or famine but has a ceiling of 40+ fantasy points and his usage goes up with the Thunder being shorthanded (as noted above). Last game he had 41 fantasy points and he have a much easier matchup on this slate against the Wolves who have conceded the second most fantasy points in the league this season.

Coby White (DS $11,430, DK $6,000) hasn't really taken off this season like many suspected, however if he gets hot, he can win you a GPP on any given day. I love the Chicago/Orlando matchup and you can even pay up for Zach Lavine if you aren’t convinced on White. But the Magic give up a high number of fantasy points to both guard positions this season and we just saw a small combo guard give them 50+ last game (Fred VanVleet).

Norman Powell (DS $11,590, DK $6,700) Well if someone told me I’d be playing Powell at this price this season I would have laughed. But man has he been so damn consistent. Over the last three games without OG in the lineup Powell has averaged over 40 fantasy points per game and is playing up to 40 minutes every other game. On this slate he draws one of the worst defensive teams in the league in the Brooklyn Nets and I expect this game to be an absolute shootout.

Pascal Siakam (DS $14,090, DK $7,600) Basically what I said for Powell above and I will be going down the same path with Siakam. His price has dropped compared to VanVleet who is fresh off an 80+ point night. But two games ago it was Siakam having 50+ fantasy points and I will be looking to get plenty of Raptors exposure in this matchup.

Bam Adebayo (DS $16,130, DK $9,200) has the matchup of the night for his position against the Washington Wizards who have given up the second most fantasy points to center this season. Bam doesn't get as many playmaking opportunities with Jimmy Butler back in the lineup but he is pretty much a lock for 40+ and offers 60 point upside in an elite matchup. Lock it in! 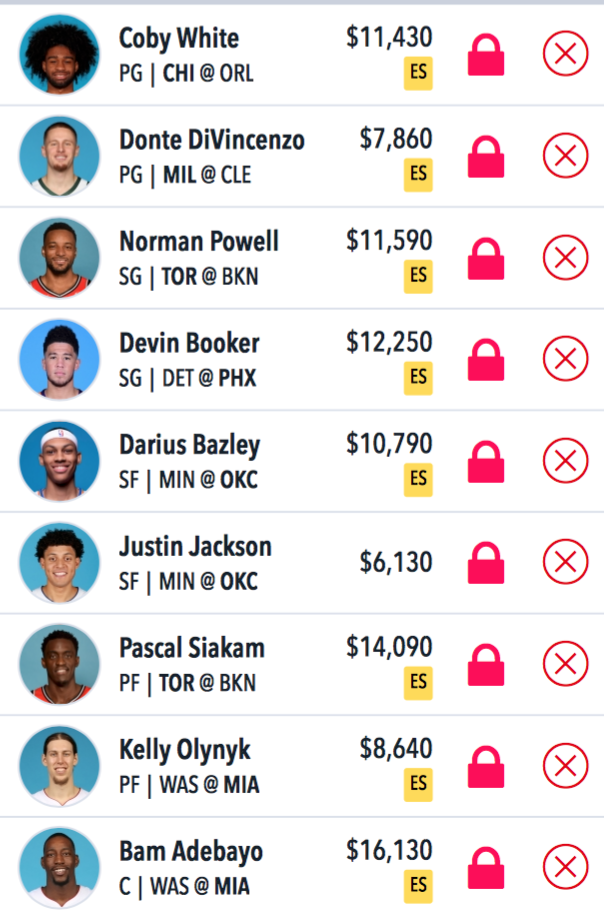