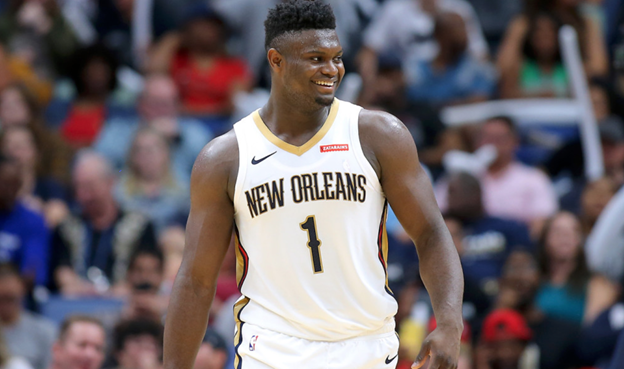 NBA Wednesday (Thursday AEST) is back again with a mega 10 game slate and a massive offering of daily fantasy tournaments for us to attack:

There are two very juicy games that stand out on this slate to attack, both of which are sporting totals over 235 points. The top game on the slate is Chicago at New Orleans with a total of 237.0. This features the 4th fastest team in the league in the Chicago Bulls going up against the second worst defense in the league in the New Orleans Pelicans. As such I love playing both ways in this matchup, as the Pelicans are playing way up in pace, while the Bulls get one of the leakiest teams in the league when it comes to fantasy points with the Pelicans giving up the 4th most this season.

The next highest total is a whopping 235.5 points for the matchup between the Golden State Warriors and the Portland Trailblazers. This matchup has the highest projected pace on the slate, with the Warriors playing at the seconds fastest pace in the league, which means the Blazers (21st) are playing way up in pace. Meanwhile the Warriors get the advantage of playing the 28th worst defensive team in the league in the Blazers.

Cody Zeller (Questionable) and Gordon Hayward (now probable) are the ones to look out for this game on the slate. It is hard to keep track of the roulette wheel that is the Hornets centre position when Zeller is out, but on this slate there will be a lot of premium value so there is no need to go to Bismack Biyombo. Rather, PJ Washington will be in play after burning everyone as chalk in the Hornets last game. He should pick up more minutes playing centre with a huge ceiling as we saw two games ago where he went for 60+.

Luka Doncic is doutbful for the game against the Thunder. This opens up an enormous amount of usage for all other Mavericks starters. Kristaps Porzingis is the obvious pay up option who should benefit if Doncic is out, while Jalen Brunson in the mid-tier will come into play (he is fresh off a 39 point game last time out).

Jerami Grant is OUT for the game against the Raptors. Without Grant we should see Saddiq Bey and Mason Plumlee receive a boost in usage, while I also like the Dennis Smith Jr as a value play.

Lebron James and Kyle Kuzma will join Anthony Davis on the sidelines for the game on this slate. This is a huge one, Dennis Schroder should take over all the usage as the primary ball handler without Lebron, while we also should see Talen Horton-Tucker receive more minutes (and possibly the start). Tucker has averaged just under a fantasy point per minute this season, so any playing time above the 25 minute mark at near the minimum price becomes an elite value play.

Fred VanVleet, Pascal Siakam and OG Anunoby will all be out for the game against the Pistons. This is another game changer, and as you can see we are going to be inundated with value options on this slate. Kyle Lowry will receive the biggest boost from a usage standpoint, while Chris Boucher should also see significant playing time. Front the value options Terrance Davis becomes a lock and load play for me, he averages just under a fantasy point per minute and brings legitimate 40 point upside when given substantial playing time.

Domantas Sabonis is questionable with a sore left ankle, along with team mates Doug McDermott (now probable) and Jeremy Lamb who are also questionable. If Sabonis is out then that creates opportunity for JaKarr Sampson, Goga Bitadze and TJ McConnell if McDermott is still out.

Kelly Oubre is questionable with a wrist injury. Thus the Warriors have recalled players from their G League in Jordan Poole and Nico Mannion. They may get minutes but the focus will go back on the Warriors starters in Andrew Wiggins and Steph Curry.

Clint Capela is also questionable with a foot injury. The Hawks may slide John Collins over to centre and bring in Solomon Hill to the starting lineup here.

Houston have lost Eric Gordon and Danuel House thus leaving 8 available players for their game against the Nets.

Based on the news above I will be locking in Terrance Davis and Talen Horton-Tucker. Other possible value plays include:

Patrick Williams (DS $8,970, DK $4,800)... this won't be the last play from this game as I will be looking to stack it six ways from Sunday. If you do end up looking for a value play that isn’t chalk I love Williams in this situation. A high paced game with little defense should open up a ceiling game from Williams, with plenty of transition opportunities and turnovers leading to steals. Williams has a ceiling of around the 30 mark, which he has flashed plenty of times this season.

Luguentz Dort (DS $7,590, DK $5,100)... anytime my boy Dort gets this cheap he is in play. The capability to hit 5+ threes and get 5+ steals gives him his ceiling of 45+ fantasy points and at his current price that is a GPP winning play if it comes off. It is an elite matchup against the Mavericks who are 25th in defense and have given up the 6th most threes in the league this season.

Dennis Schroder (DS $10,690, DK $5,900) will be a lock and load play for me on this slate. His price falls right in that mid-range band and without Lebron or Davis I expect him to have the highest usage for the Lakers as the lead (and only) real play maker. He offers 40+ point upside, which we have seen many themes in similar situations throughout his career. To top things off he draws the best matchup in the league against the Sacramento Kings who have conceded the most fantasy points in the league this season.

Zach LaVine (DS $16,980, DK $9,500)... ok let the stacking begin. I forever love Zach LaVine’s slate busting potential for GPPs and his price point on Draftstars particularly is ideal for that play. With 60+ point upside he draws the top game total on the board and what looks to be arguably the top matchup in the league right now from a fantasy perspective with the Pelican’s ranked dead last in defensive efficiency over the past 15 games. They also give up the most three pointers in the league, which is always the key to ceiling games from LaVine.

Zion Williamson (DS $16,470, DK $9,100)... right back the other way I will lock in Zion. He has been an absolute monster averaging 50 fantasy points from his last 5 games. The Pelicans have essentially given him the keys to the car, assuming the majority of the play making responsibilities from the top of the key. This is a pace up matchup for the Pelicans and Zion should be able to dominate inside against the Bulls who have had no interior defense all season.

If you want to get away from the Chicago vs New Orleans game, Steph, Lillard and Harden are three other premium plays all in elite spots on this slate. 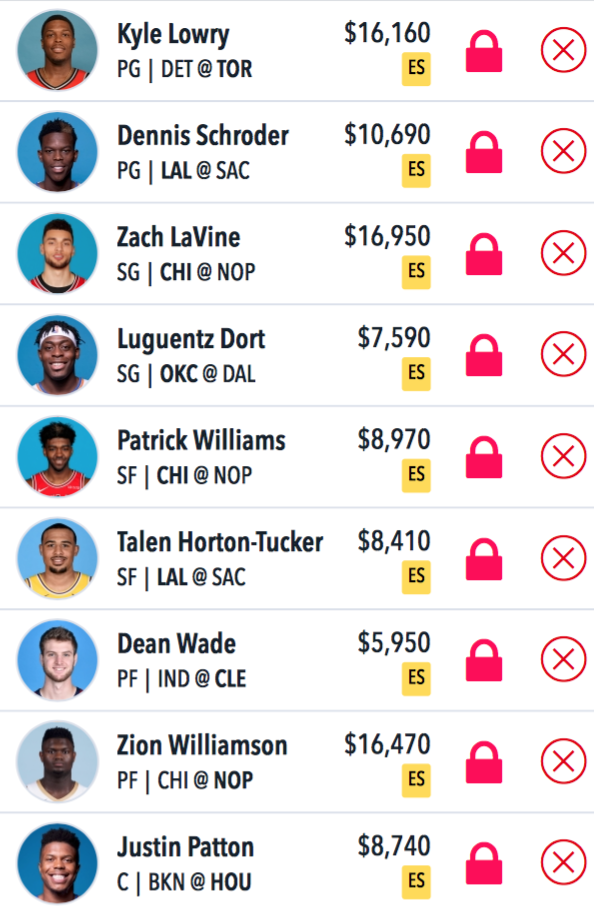