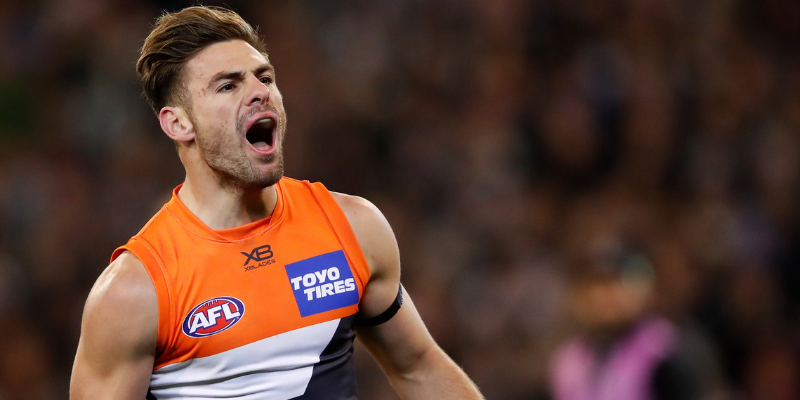 The monster Saturday slate is here again with four games and and a plethora of options to work through in preparation for the major DFS contest across the major platforms:

The Richmond Tigers stand out above every other team conceding the most fantasy points by a wide margin through the first two rounds. It should be noted that this is largely inflated by Collingwood’s fantasy masterclass last week.

At the other end of the scale we also have the Brisbane Lions on this slate who have conceded the fewest points in the league through two rounds.

The big story so far for the Tigers has been backlines scoring big against them. They have given up 87 points per player, which is 11 points higher than the next team. This isn’t a new trend either as the Tigers conceded the 5th most points to backs in 2018.

The Blues gave up the second most points in the league in 2018 to midfielders and this looks to still be an area to attack Carlton in 2019 as they have given up 96 points per player through 2 rounds.

The Blues are the team to attack in the ruck on this slate as well. With Kreuzer still yet to return the opposition has been feasting on Andrew Phillips, averaging 115 points per game so far this year.

All four games are expected to be relatively close contests on this slate, which means there isn't a standout team to stack. By the numbers GWS look like a good option with the way the Tigers are giving up points early in the season. 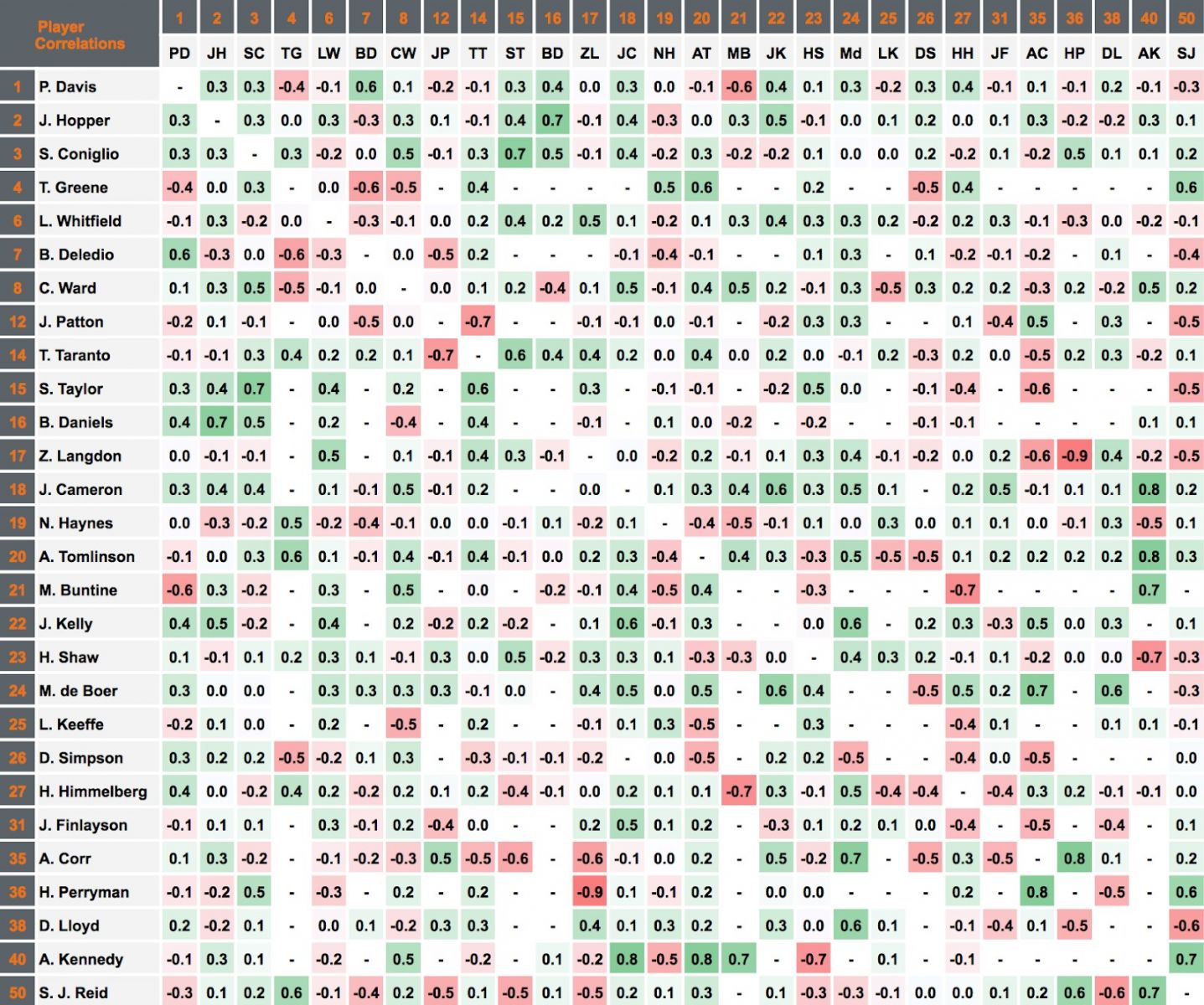 GWS have had a clear line of players who correlate well together, starting with Josh Kelly and Lachie Whitfield who have a history of linking up together for a positive 0.4. Tim Taranto is a third midfielder who positively correlates with both Kelly and Whitfield at positive 0.2.

This leaves a separate stream where Stephen Coniglio negatively correlated with both Whitfield and Kelly so when I am stacking GWS this weekend I will be avoiding Coniglio in my stacks with Kelly and Whitfield and vice versa for stacks with Coniglio.

Josh Rotham - DEF (DS $5,000, MB $3,500) is a first gamer for the Eagles that will replace Liam Duggan across half back. Rotham has shown the capability to score at the WAFL level being a solid ball winning and rebounding defender. Throughout the preseason this year in the WAFL he accumulated 27, 17 and 23 disposals and at the bare minimum price he should be a strong chance to return 10x on a slate where there isn't a significant amount of obvious value in play.

Callum Sinclair - RK (DS $12,580, MB $7,900) has the best matchup on the slate for rucks as noted above. Sinclair showed his upside in round 1 where he topped the 100 point mark in another plus matchup. He also loves playing at Marvel stadium where he has averaged +11 fantasy points over his last 9 games on the ground.

Zac Williams - DEF (DS $11,510, MB $7,200) will be my first back selected as a result of the matchup against the Tigers who have given up an obscene amount of points to backs this season. Williams has yet to explode yet this season but as we have seen in the past he brings 100 point upside and this is an elite matchup that should mean his ceiling is obtainable.

Stephen Coniglio - MID (DS $16,670, MB $9,900) should bounce back this week now that he is out of the clutches of Mark Hutchings. Fortunately not only do Richmond not tag (didn’t tag once through 2018), as mentioned above they have also given up the most fantasy points in the league this season. In 2018 the Tigers gave up 108 points per game to the oppositions top 3 scoring midfielders, which was the 5th highest mark in the league.

Adam Treloar - MID (DS $16,630, MB $9,100) should have free reign over the MCG this Saturday night as the Eagles put their defensive work into Sidebottom (see the FADE below). Treloar has started the season in blazing form posting a massive 152 last week and a 128 in round 1. The Pies are the biggest favourites on this slate and if they roll on like they did last week Treloar will have ample opportunity to fill up on fantasy points.

Steele Sidebottom (DS $14,820, MB $9,200) is the obvious call here. He has been in Mark Hutchings pocket since round 17 last year when Mark proceeded to squish him like a bug in their three meetings to end the year. Holding him to 71 points per game, which would have been even lower but the Eagles bizarrely did not tag him early in the qualifying final. This is a mistake they certainly won’t make again.

The Dragon has also picked out a lineup for the Saturday $2 Mini - feel free to use it as a starting point for your own lineup and adjust to your liking! (YTD $8 spend, $12.96 return) 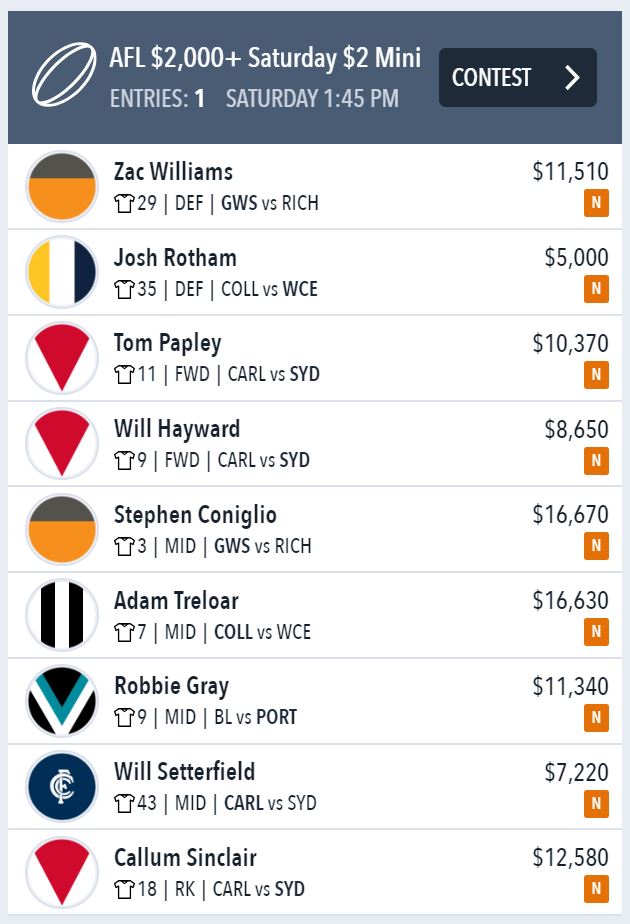