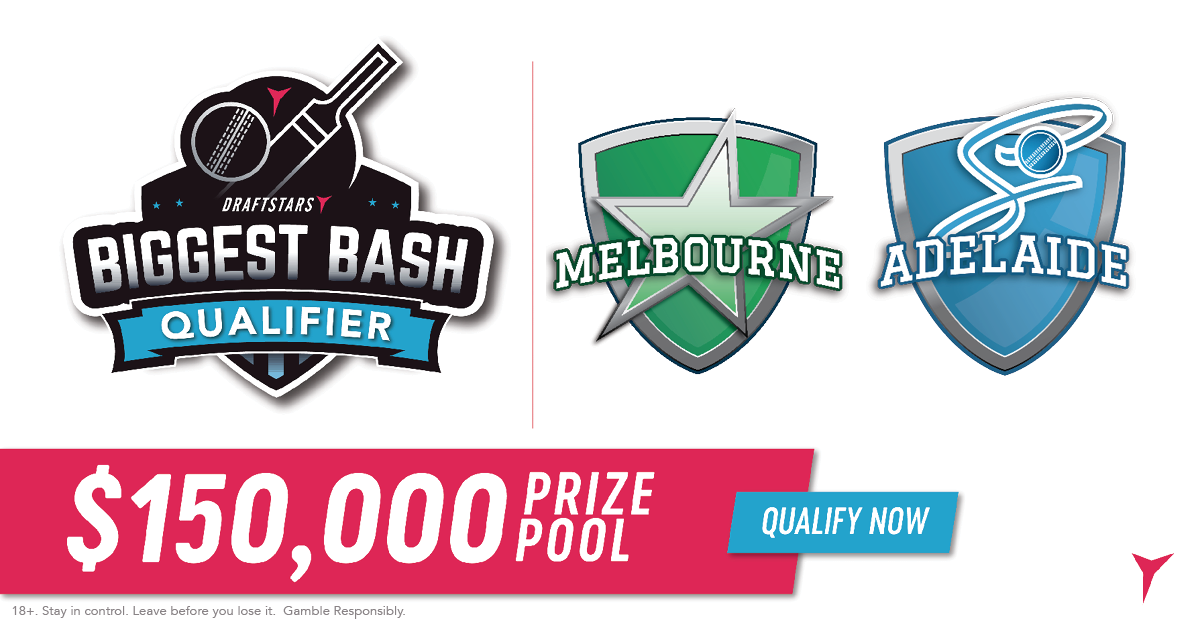 The first match in Wednesday’s BBL08 double header is in Moe, Victoria at Ted Summerton Reserve where the Melbourne Stars will host the Adelaide Strikers. The Stars regained their key Australian representatives last game and duly dominated the Renegades to win by 6 wickets, moving them to 4 wins and 5 losses. The Strikers lost another home game on Monday night to the Hurricanes which has seen them fall to 4-5 also, making this a massive clash for both sides.

The Stars go into this contest unchanged, while the Strikers have brought paceman Wes Agar into the squad to replace Michael Cormack. For more information on all the players you can read our pre-season squad profiles on the Melbourne Stars and the Adelaide Strikers.

This is the first BBL match ever played at Ted Summerton Reserve, so we have no previous data to base any decisions on. On a general note, matches played on non-traditional grounds have yielded lower scores so you may lean this way with your lineups.

Our latest Biggest Bash qualifier interview is with “Mattylee” – read how he hopped on the ‘Cane Train and rode it all the way to grab his golden ticket to the live final!

Australian all-rounder Marcus Stoinis ($24,900) is in undeniable form, returning from national duties to smash 70 against the Renegades as well as taking 3/19 for good measure. He has an incredible three game average of 151 and has upside as high as any player in the competition. Fitting his salary in won’t leave you many more options but he gives you genuine opportunity with bat and ball and is capable of that must-have score.

Colin Ingram ($15,500) has found form in recent times with consecutive knocks of 67, 48 and 57, all at a strike rate of 139 or better. His salary hasn’t quite caught up to this three game average of 88 so he still presents as a value option if he continues his current form. Paying up for a batsman on an unknown pitch is a small concern but if it’s an in form batsman you want to play, Ingram fits the bill.

Often the match winning play can be to choose the batsman who going through a lean trot and Jake Weatherald ($12,400) fits the bill. With a three game average of 11 fantasy points he has killed more than his fair share of lineups lately however this comes off the back of a couple of half centuries which highlight his ability when he gets a start. At a below average salary he gives your lineup flexibility and he is capable of a big score.

Rashid Khan ($22,300) looked, gulp, human against the Hurricanes on Monday night when he failed to score a point with the ball for the first time all season. No doubt he will be hungry to bounce back after that effort in a must-win game and his season average still remained as high as 78 which is more than reasonable at this salary. Everyone may not be as keen to forgive him for one bad innings but he still has 100+ point upside and is worthy of exposure in your lineups.

Dwayne Bravo ($15,000) continues to fall in salary as his performances have been merely solid this season rather than great. His ownership is slowly reducing, especially when the Australian reps are back in town, but he still remains capable of scoring in all categories. Even 17 runs and one wicket was enough to return reasonable value last game so given his ability to take 3+ wickets he can get you a match winning score at this price.

It is had to go past the recent form of Jackson Bird ($12,800). Not renowned as a T20 bowler, Bird has taken his opportunity with three wickets in three games and obtained the economy bonus in all three matches. He can be extremely hard to get away if there is anything in the pitch and appeals as the best bowling option of those at a below average salary.