The first multi-game slate of the AFL season is on deck for Saturday with four games to sort through. The major tournaments across the industry include:

Looking at last season’s numbers, there are only two teams playing on this slate who were in the top half of the competition for fantasy points conceded – Western Bulldogs (4th), and Adelaide (6th). The four stingiest teams are also involved, with one of Port Adelaide, West Coast, Hawthorn and Sydney in each game.

Complicating this to a degree, the Bulldogs and the Crows are playing at home where you may anticipate their best footy to come from so targeting them may not be quite so straight forward.

Last year the Bulldogs and the Swans were extremely vulnerable against opposition rucks so choosing your ruckman from this match will be a popular move. Port Adelaide also appears high on this chart but those numbers were skewed when Paddy Ryder was out with an injury and they now look to start Scott Lycett in the ruck, who was involved in a competitive West Coast ruck outfit.

The Bulldogs are a common denominator in this section and they stand out when assessing the forward position as they gave up the most points in the competition to the opposition’s highest scoring forwards, even more than the lowly Suns. A potential opening for the Swans forwards there.

Oscar Allen ($5,610 DS, $3,500 MB) has impressed in the pre-season for the Eagles playing up forward. Despite only playing two games last season, one of those were in Brisbane against the Lions where he scored 62 playing down back, a score which would be valuable at this near minimum salary. While he is good size he is quite mobile and Brisbane were in the top 6 last season for conceding points to opposition forwards so a 10x/15x return looks well within his capabilities.

James Cousins ($9,090 DS, $3,500 MB) has had an excellent pre-season as he jostles for some of the midfield time left open by the injury to Tom Mitchell at the Hawks. Adelaide have an imposing midfield but do concede fantasy points as they are predominantly attack-focused. Cousins’ price is far too cheap on Moneyball so he holds tremendous appeal there, but his price on Draftstars is also reasonable enough that he has 10x upside.

Brodie Smith ($8,700 DS, $7,200 MB) is on the radar of fantasy coaches across the country given the boost his kicking-in role should give to his score with the new rules. He is especially well priced on Draftstars where he is projected to score 9.6x his salary on a projection of 83. He has 100+ upside, proven by his 101 last time he played, and rates extremely highly on this slate.

Dom Sheed ($11,930 DS, $6,900 MB) had an absolute monster JLT series where he averaged 130 so will be firmly on everyone’s radar, but at this price you might need to embrace the chalk. As is well documented Andrew Gaff will miss the first two games due to suspension and his absence has opened the door for Sheed to pile on the fantasy points. Shuey and Yeo attract the main attention and Brisbane should keep an eye on former Lion Jack Redden so Sheed looks free to do as he pleases.

Callum Sinclair ($12,540 DS, $7,400 MB) gets a dream match-up against youngster Tim English from the Dogs. He showed with 7 tons last season that he has enough upside at this price and scored 98 from the corresponding matchup last year. Max Gawn ($14,570 DS, $8,800 MB) is sure to attract plenty of ownership given his very reasonable price and is a valid option, but Sinclair presents as a worthwhile pivot if you need the money to spend elsewhere.

Continuing the theme of taking on the Bulldogs, if you want to embrace some risk in your lineup you should take a close look at Lance ‘Buddy’ Franklin ($12,650 DS, $7,800 MB). The ‘Dogs have all sorts of trouble stopping Buddy with his last three scores against them being 100, 101 and 127. His ownership may be reduced given the publicity around his injury issues and lack of training, but that was the case last year as well and he tonned in his last three home and away games. Of course if he looks as lame as Tom Lynch did Thursday night he may kill your lineup but he has GPP-winning upside.

Expect Dayne Zorko ($14,050 DS, $8,600 MB) to be in the crosshairs of Eagles’ tagger Mark Hutchings. Hutchings has developed into one of the leading stoppers in the game and when he went to Zorko in round 23 last season he restricted him to 74 points. He tagged Neale with less success a few weeks earlier when he was at Fremantle, so expect him to get the job done on Zorko.

The Dragon has also picked out a lineup for the Saturday $2 Mini - feel free to use it as a starting point for your own lineup and adjust to your liking! 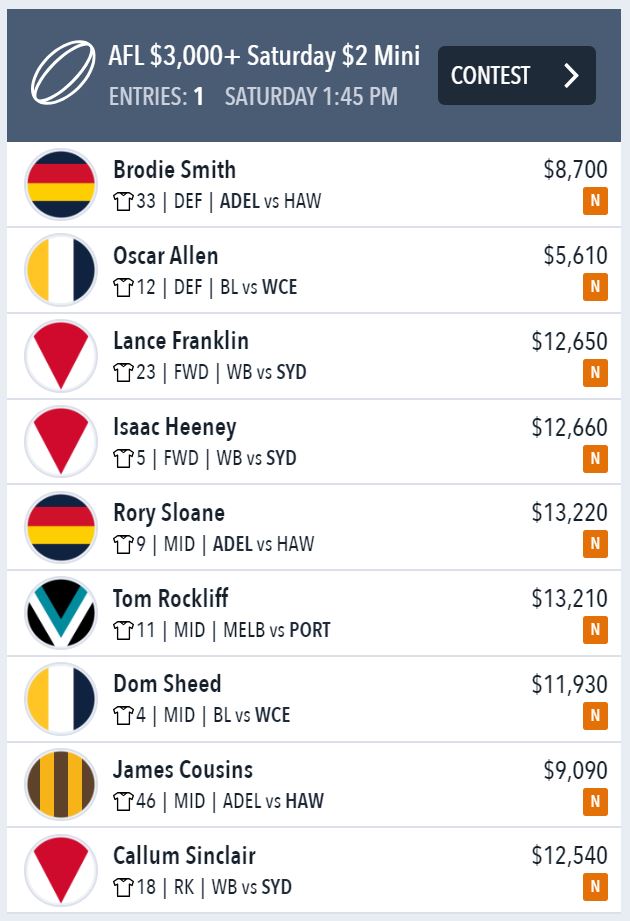