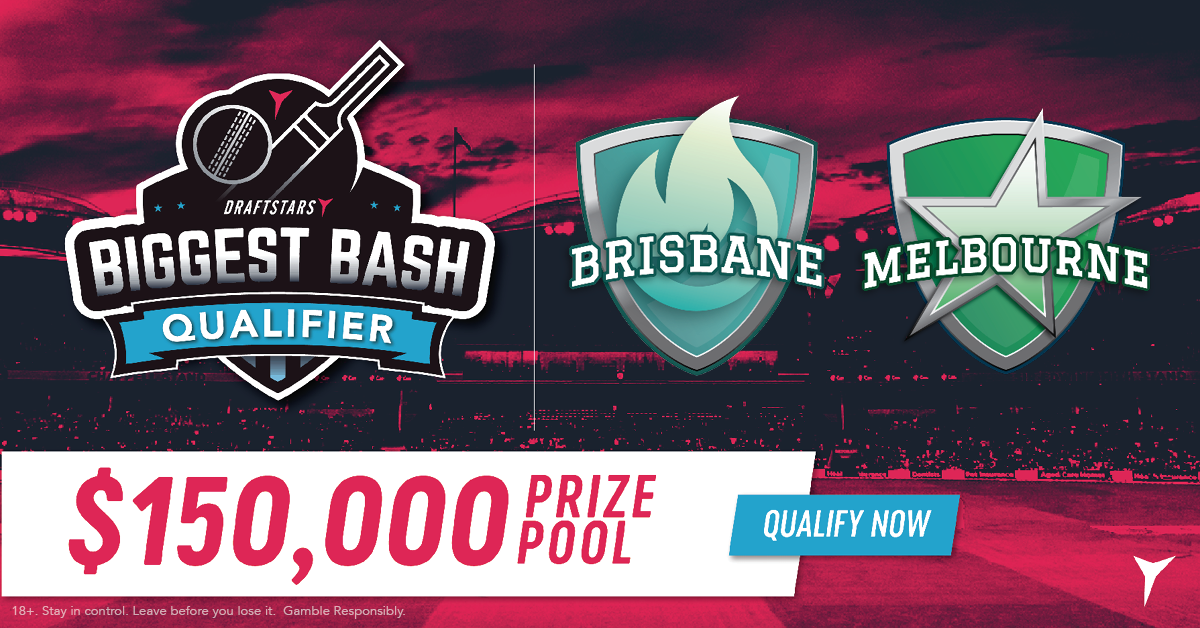 BBL08 heads to Brisbane for the last time this season for an intriguing contest between the Brisbane Heat and Melbourne Stars at the Gabba in what will be Brendon McCullum’s last game in front of his home crowd. The Heat kept their season alive with a 6 wicket win in Adelaide and could jump the Stars into 4th spot with a win here. The Stars lost by 27 runs in Perth in their last outing and need a win in one of their two remaining matches to lock up a spot in the finals.

Last time these two teams played the Heat looked set for victory chasing just 134 but fell 5 runs short at the MCG. Marcus Stoinis was far and away the player of the match with 43 off 29 balls and 4/21 off his 4 overs.

The Heat welcome back Brendan Doggett into the squad to replace Sam Heazlett. Nepalese spinner Sandeep Lamichhane returns for the Stars, replacing English fast bowler Liam Plunkett. Learn more about the players from each side in our pre-season squad profiles on the Brisbane Heat and Melbourne Stars.

The Gabba is an extremely high scoring venue with an average first innings score of over 180 over the past three seasons. Batters generally have a fun time on what is usually a fast, true deck and with an average run rate of over 9 runs per over it can be hard for bowlers to earn the economy rate bonus on Draftstars. In the first game of the season the Heat struggled their way to 146 before the Strikers picked them up pretty easily with 5 wickets to spare. Following that, the Heat again struggled batting first, scoring 144, before the Renegades cruised to victory for the loss of two wickets.

Just when you thought the scores might be lower at the Gabba this season, the Thunder piled on 186 before the lights went out to save the Heat who were 2/10 in reply. However, the Scorchers struggled here last time to be restricted to 128, a score the Heat reached easily with 6 wickets in hand and 15 balls to spare. The ground has provided the third highest amount of fantasy points to batsmen in the past two seasons of all major venues, while being on the lower side of fantasy points scored by bowlers so consider that when building your lineups (stats from our BBL Resources Points Against page). 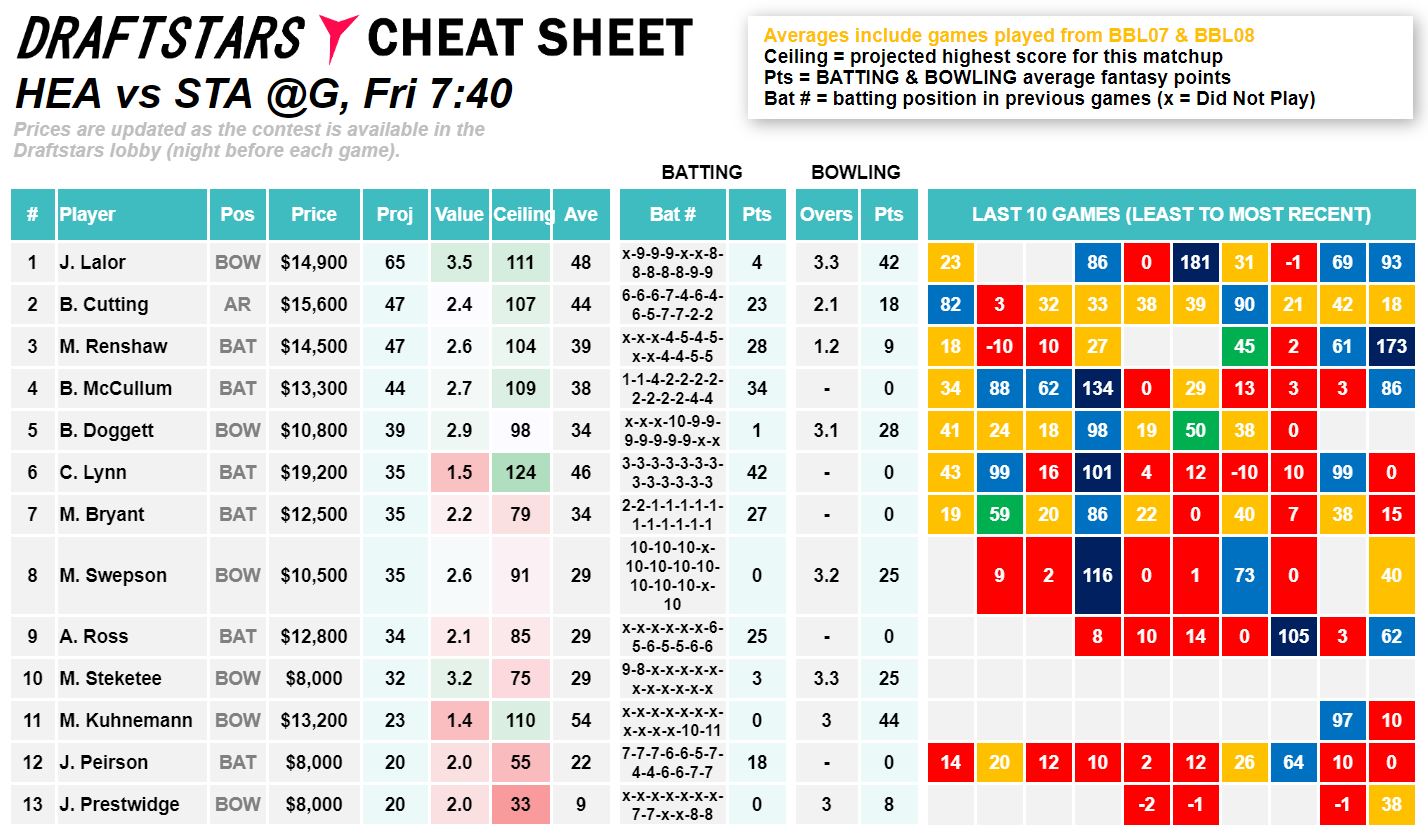 Peter Handscomb ($14,100) falls again in price after failing against the Scorchers. He has had an underwhelming season so far but who could forget his 70 off 35 balls against the Sixers and he also made a classy 36 against the Strikers. Against a plain Heat bowling lineup this may be your chance to get a quality player in a great spot at lower ownership so he looks worth the risk.

Matt Renshaw ($14,500) has had his salary raised considerably after his latest match where he made 90 off 50 balls plus 1/15 to score a massive 173 fantasy points. He may feel a bit expensive given you could play him for $8,000 just a couple of matches ago but he is thriving in his role opening the bowling and is in great touch with the bat. Not as great an option as he has been in his past couple but still a worthy play in the right lineups.

You will need to save money somewhere to play some of the more expensive guys and Max Bryant ($12,500) always holds some appeal given his style at the top of the order. Two of his last four knocks have been reasonable, scoring mid 20s, and if he can do that at a good strike rate that will be enough at this salary. Of course if he can stay in a bit longer he can start to return genuine upside pretty quickly with his hard-hitting style.

Marcus Stoinis ($25,000) remains a massive price but deservedly so given his performances throughout BBL08. He showed signs of being human last game by scoring no points with the ball, and even though he made 49 with the bat his strike rate wasn’t good enough to earn the bonus. A game like that is not good enough at this price tag and fitting him into a lineup looks difficult here given the lack of value options. That all said, his upside is unrivalled here on a friendly pitch and the factors mentioned may result in lower ownership. You can make some unique lineups by fading him if you are that way inclined but I will still be looking to have some exposure because if he gets going, you will be dead without him.

Josh Lalor ($14,900) has been superb recently, taking 14 wickets in his past 6 games including 3 hauls of 3 wickets or more. It is this ability to take multiple wickets which gives him most appeal in what is a reasonably plain Heat bowling attack and he has been getting plenty of opportunity at the end of the innings where wickets often fall. His economy rate is iffy so if he doesn’t take a wicket he may kill your lineup but he is capable of a score that can win you a contest.

Adam Zampa ($11,400) has fallen sharply in price after his 1/35 against Perth last game. Two games ago against the Heat he was excellent in taking 1/17 off 4 overs for a score of 83, clearly a great score if he can reproduce at his salary. The Heat can be vulnerable against spin so Zampa appeals as an excellent value option given his ability to score both through wickets and the economy bonus.